Back to School with the Founders 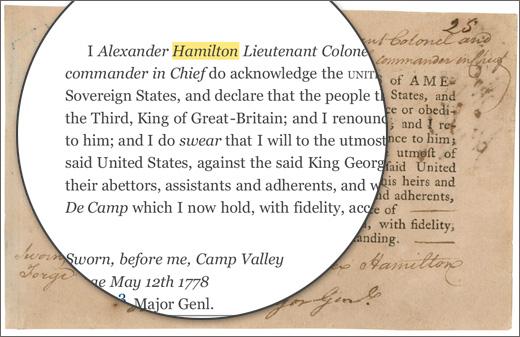 The original of Alexander Hamilton s Oath of Allegiance and the Founders Online transcription.

As school is about to begin, please help us spread the word about Founders Online (http://founders.archives.gov/), the comprehensive online edition of the papers of the key figures in the founding of the United States of America. Drawn from the monumental work of six historical documentary editions, the website consists of the transcribed and annotated papers of:

Imagine if Thomas Jefferson had an iPad or if Benjamin Franklin wrote a blog. What if you could access George Washington's email account or John Adams's Twitter feed? What might you find if you could do a keyword search through Alexander Hamilton's diaries or find the electronic notes that James Madison made when he was doing research in preparation for his draft of the Constitution? Suppose instead of having to search for all the Founding Fathers' handwritten 18th and early 19th century documents in archives scattered around the world, there was a single portal in which you could find all of their known papers compiled, transcribed, and annotated with explanatory text? 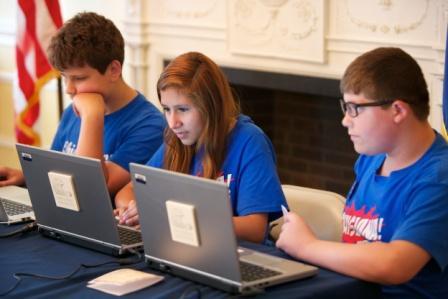 Students from coast to coast are now able to freely read letters to and from these six statesmen, their diary entries, speeches, articles, and other important documents, providing a first-hand look at the events and ideas behind the founding of the Nation. Fully indexed and cross-referenced, this new online resource offers not only instant access to over 120,000 documents (with an additional 55,000 to come), but it allows for searching across collections. So now scholars and others can easily find all references to particular subjects and individuals. Created through a partnership between the NHPRC and the University of Virginia Press, Founders Online is an exciting new tool that every student of American history needs to know.

Fifty years ago on August 28, 1963, Dr. Martin Luther King, Jr. delivered his famous "I Have a Dream" speech on the steps of the Lincoln Memorial as part of the March on Washington for Jobs and Freedom.

Planning for the March began in earnest in June 1963, organized by the Council for United Civil Rights Leadership, an umbrella organization created in June 1963, but Martin Luther King Jr. had been using the rhetoric of the "dream" since 1960, when he gave a speech to the National Association for the Advancement of Colored People called "The Negro and the American Dream." He had also delivered a "dream" speech in Detroit in June 1963. 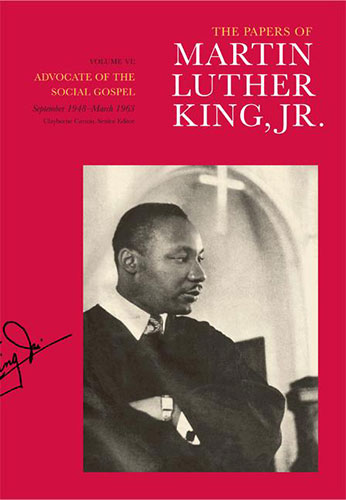 Advocate of the Social Gospel: September 1948 - March 1963, the sixth volume of The Papers of Martin Luther King, Jr.

But as The Papers of Martin Luther King, Jr. show, he had long been concerned with civil rights as bound up with the themes of poverty, human rights, and social justice which are clearly present in his earliest handwritten sermons, and which convey a message of faith, hope, and love for the dispossessed. His enduring message can be charted through his years as a seminary student, as pastor of Dexter Avenue Baptist church, as a leader of the Montgomery bus boycott, and, ultimately, as an internationally renowned proponent of human rights who saw himself fundamentally as an "advocate of the social gospel."

In 1985, Coretta Scott King asked Stanford historian Clayborne Carson to edit and publish The Papers of Martin Luther King, Jr. Since then, the King Papers Project has engaged in a broad range of activities illuminating the Nobel Peace laureate's life and the movements he inspired. Funded by the NHPRC, the King Papers Papers project has published six volumes of a planned 14-volume edition of his papers.

In 2005, the Martin Luther King, Jr. Research and Education Institute was created at Stanford University to provide an institutional home for a broad range of activities illuminating the Nobel King's life and the movements he inspired. The Institute's endowment supports programs that serve as an enduring link between Stanford's research resources and King's dream of global peace with social justice.

On September 17, 1787, a majority of the delegates to the Constitutional Convention approved the documents over which they had labored since May. After a farewell banquet, delegates swiftly returned to their homes to organize support, most for but some against the proposed charter. Before the Constitution could become the law of the land, it would have to withstand public scrutiny and debate.

The document was "laid before the United States in Congress assembled" on September 20. After general debate, Congress directed the state legislatures to call ratification conventions in each state. Article VII stipulated that nine states had to ratify the Constitution for it to go into effect.

It took 10 months for the first nine states to approve the Constitution. The first state to ratify was Delaware, on December 7, 1787, by a unanimous vote, 30 - 0. Delaware's speediness thwarted Pennsylvania's attempt to be first to ratify in the hope of securing Philadelphia as the seat of the Federal Government.

The first real test for ratification occurred in Massachusetts, where the fully recorded debates reveal that the recommendation for a bill of rights proved to be a remedy for the logjam in the ratifying convention. New Hampshire became the ninth state to approve the Constitution in June, but the key States of Virginia and New York were locked in bitter debates. Their failure to ratify would reduce the new union by two large, populated, wealthy states, and would geographically splinter it. The Federalists prevailed, however, and Virginia and New York narrowly approved the Constitution. When a bill of rights was proposed in Congress in 1789, North Carolina ratified the Constitution. Finally, Rhode Island, which had rejected the Constitution in March 1788 by popular referendum, called a ratifying convention in 1790 as specified by the Constitutional Convention. Faced with threatened treatment as a foreign government, it ratified the Constitution by the narrowest margin (two votes) on May 29, 1790.

The story of the process has been the province of the Documentary History of the Ratification of the U.S. Constitution Project, headquartered at the Wisconsin Historical Society, has been supported by the NHPRC for nearly 40 years. To date, the project has completed 24 of a planned 30 volumes. This documentary series is a research tool of remarkable power, an unrivaled reference work for historical and legal scholars, librarians, and students of the Constitution. The volumes are encyclopedic, consisting of manuscript and printed documents compiled from hundreds of sources, copiously annotated, thoroughly indexed, and often accompanied by microfiche supplements. 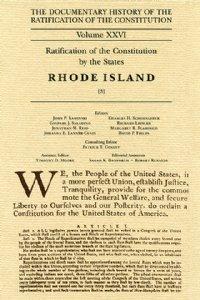 The third volume of papers on the Rhode Island project has just been published, and it includes this remarkable letter from Daniel Owen, president of the Rhode Island convention, to George Washington.

I have the pleasing satisfaction of informing your Excellency, that the Constitution of the United States of America, was this day ratified and adopted by the Convention of the People of this State, agreeable to the recommendations of the General Convention assembled at Philadelphia, and the consequent resolution of Congress thereon.

With Rhode Island finally saying yes-by two votes-all 13 of the original colonies had ratified the Constitution. 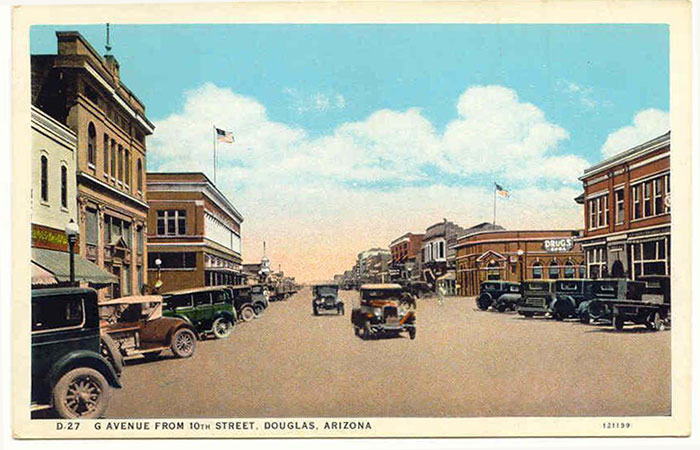 The National Historical Publications and Records Commission partners with state historical records advisory boards to carry out statewide projects all across the country. One of the more successful parts of the program is re-grant funding, which provides smaller grants to local institutions for important projects that might otherwise not be competitive on a national level.

In the most recent round in Arizona, $20,000 in re-grants (half supported by the NHPRC and half matched by the Arizona State Library, Archives, and Public Records) has gone to the following organizations: 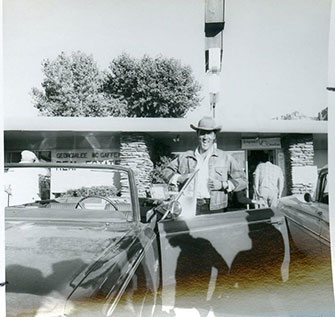 Elvis Presley hams it up for reporter Elizabeth Rigby during filming of his film, Stay Away, Joe, in Sedona in 1965. Courtesy Sedona Heritage Museum 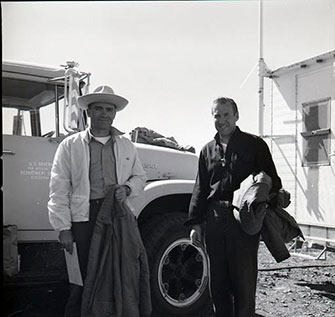 At Princeton University's Mudd Library, archivists are building one of the most comprehensive online collections on America's involvement in the Cold War. A grant from the NHPRC is supporting Digitizing the Origins of the Cold War, a two-year project to digitize 416,000 pages representing portions of six manuscript collections concerning the Cold War. Specifically, the project will digitize correspondence, speeches, diaries, and other primary documents from the Council on Foreign Relations collection, and the papers of Adlai Stevenson, George F. Kennan, Allen W. Dulles, John Foster Dulles, and James V. Forrestal. 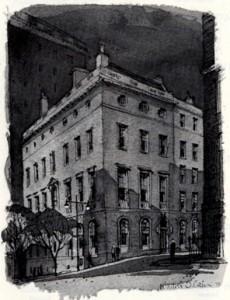 The study group records of the Council on Foreign Relations contain information about this NGO's international work to establish peace following World War II. The papers of Eisenhower cabinet members John Foster Dulles (Secretary of State) and his brother Allen Dulles (CIA director) reveal how the United States implemented the policy of containment in Iran, Guatemala, Vietnam, and Hungary. These two collections also document the Suez Canal Crisis, the origins of the Space Race, and the Cuban Revolution. The Allen Dulles Papers also include the papers from his service on the Warren Commission, which supplement the published text found online. The James F. Forrestal papers detail the anti-Soviet mindset of the first Secretary of Defense, who oversaw the integration of the War and Navy Departments in the nascent days of the Cold War. George Kennan, a mid-level diplomat, wrote the "Long Telegram" and became the architect of the U.S. containment policy. He later was the first director of the State Department's Policy Planning Staff and advised Secretary of State George Marshall on military alliances and the Marshall Plan. Also included are the papers of Adlai Stevenson, United Nations Ambassador under Presidents Kennedy and Johnson. Among his more well known activities, Stevenson traded barbs with the Soviet ambassador during the Cuban Missile Crisis at the UN Security Council.

On October 25, 1962, Adlai Stevenson confronted Soviet Ambassador Valerian Zorin, challenging him to admit the existence of the missiles. Ambassador Zorin refused to answer.

"Do you, Ambassador Zorin, deny that the U.S.S.R. has placed and is placing medium- and intermediate-range missiles and sites in Cuba? Don't wait for the translation! Yes or no?"

"I am not in an American courtroom, sir," Zorin responded, "and therefore I do not wish to answer a question put to me in the manner in which a prosecutor does-"

"You are in the courtroom of world opinion right now," Stevenson interrupted, "and you can answer yes or no. You have denied that they exist, and I want to know whether I have understood you correctly."

"You will have your answer in due course," Zorin replied.

"I am prepared to wait for my answer until hell freezes over, if that's your decision," countered Stevenson. "And I am also prepared to present the evidence in this room."

You can read all about the digitization project in its six-month progress report at http://blogs.princeton.edu/mudd/category/nhprc-digitization-project/