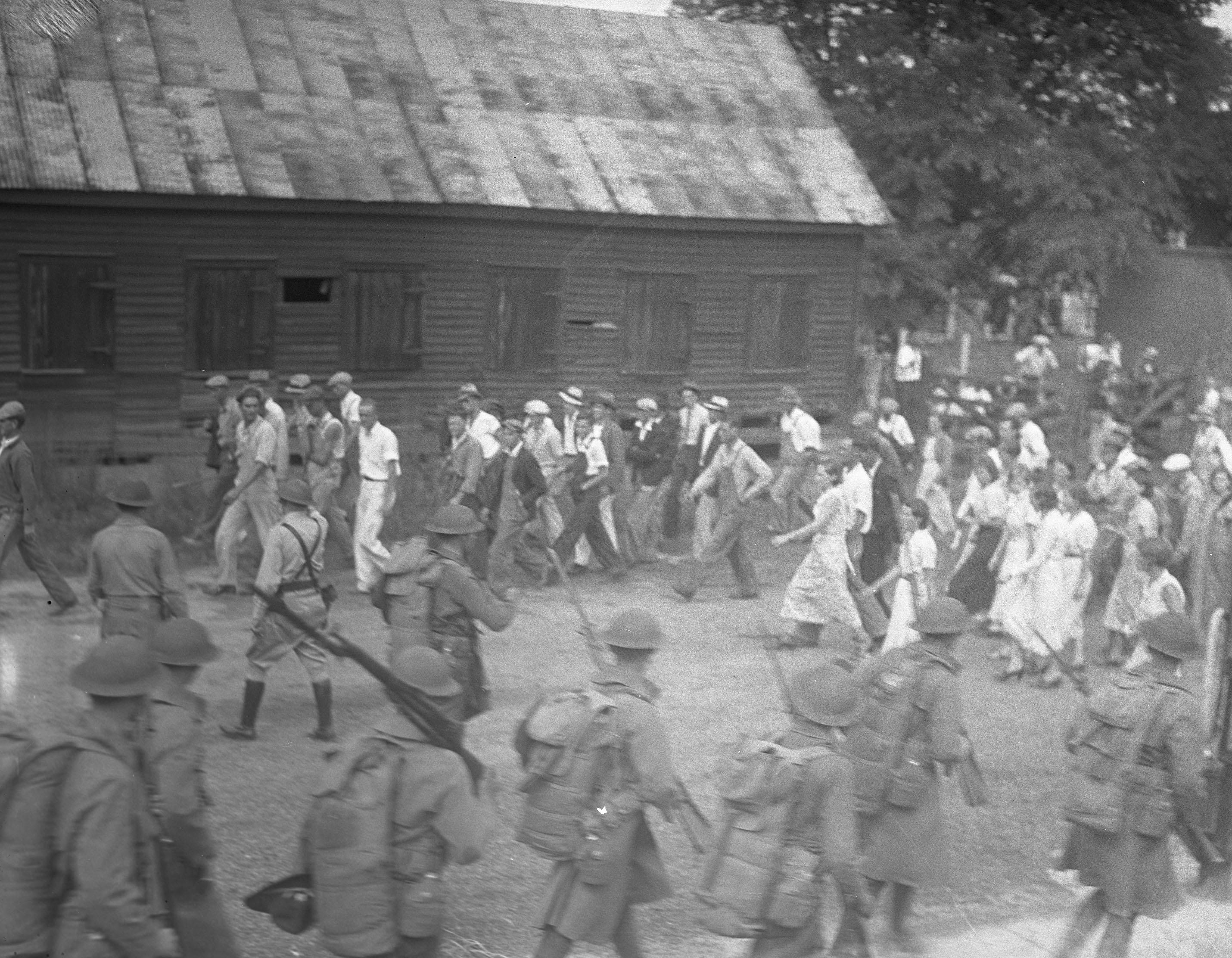 Archivist of the United States David S. Ferriero has awarded 33 grants totaling $3,066,505 for historical records projects in 19 states and the District of Columbia. The National Archives grants program is carried out through the National Historical Publications and Records Commission (NHPRC). A complete list of new grants is available at http://www.archives.gov/nhprc/awards/awards-5-15.html

Grants went to two projects to provide access to historical records: dance companies at the New York Public Library and oral histories from the Brooklyn Historical Society. Three projects will undertake digitization of collections: the Uprising of ’34 Oral History in the Southern Labor Archives at Georgia State University; Civil Rights Collections at the College of Charleston; and interviews from the "Eyes on the Prize" television series at Washington University in St. Louis.

Four projects were funded under the new Literacy and Engagement with Historical Records category: a project to improve access to World War I documents for people with print disabilities via Connecticut Radio Information Systems; a Citizen Archivist Initiative at Keene State College in New Hampshire to transcribe 19th century documents; "Mapping the Fourth of July in the American Civil War" at Virginia Tech; and a collaborative of the Huntington Library, the Abraham Lincoln Presidential Library and Museum, North Carolina State University, and Zooniverse to transcribe and decode military telegrams sent during the Civil War.

Join us for Strategic Planning 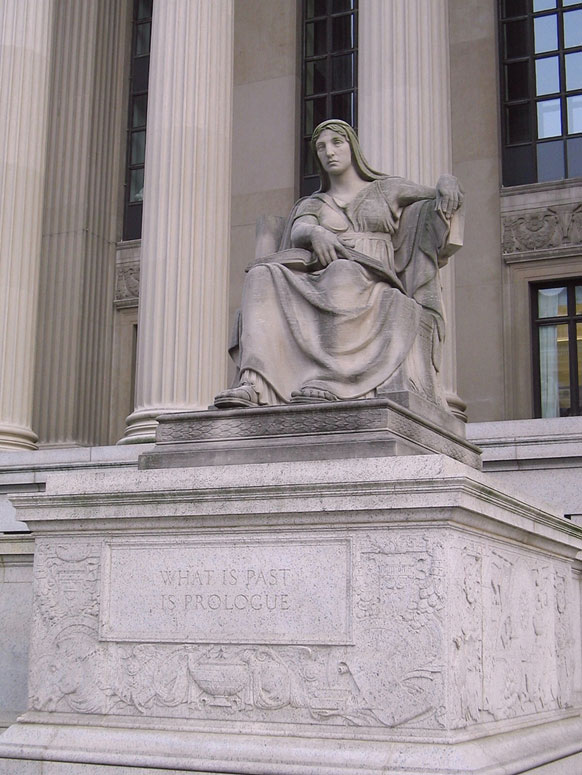 Enlarge
What is past is prologue, inscribed on Future (1935, Robert Aitken) located on the northeast corner of the National Archives Building in Washington, D.C.
A full presentation of this plan is available on YouTube at https://youtu.be/BV2ZVLupFJ0 that will provide some background and context for the work of the NHPRC and how we drafted this Preliminary Strategic Planning Goals Framework, and we encourage you to review it.

We welcome your comments on our Annotation blog or at one of our Webinars scheduled for July 28 and August 12. See information below on how to participate.

As we begin our Strategic Planning process, the Commission has met and discussed its enduring strengths, ongoing mission, current programming, and broad needs for the preservation and use of historical records. Out of this initial discussion, the staff has put together a preliminary overview of some future goals and directions for the Commission. Some of these ideas would require additional resources, including funding partnerships.

The primary role of the Commission is to provide opportunities for the American people to discover and use records that increase understanding of our democracy, history, and culture. To that end, the National Archives funds projects that publish collections of historical records—including documentary editions in print and online versions and digital editions online. Several challenges have arisen during this transitional period, and the Commission will use its regular programming and seek new funding to:

A key challenge ahead is to help grantees engage directly with people in their communities and online. Along with efforts for greater public engagement, archives are encouraging people to learn critical thinking skills and basic research techniques when seeking and using historical records in both analog and digital formats. The National Archives has enlisted Citizen Archivists in crowdsourcing, and the Commission will seek to broaden that practice and to:

Provide leadership through the National Archives.

The National Archives plays a key national leadership role in developing and promoting best practices, model programs, and partnerships among the nation’s vast network of archives and documentary editing projects. Through the Commission, the National Archives seeks to:

Adapt Commission practices to extend its reach and leverage.

The Commission seeks to encourage a more inclusive pool of applicants that represents the rich diversity of America’s culture and history. To that end, it will seek ways to demonstrate the public impact of its programming and to improve its internal management processes to:

Join the NHPRC for a discussion of its Strategic Plan at webinars on:

Connect to the webinar: https://www.connectmeeting.att.com

You will have the option for the Connect Meeting App to call you to connect you to the webinar. You have to enter your phone number. This is the best choice!

If you can’t make one of the webinars, you can always contact Communications Director Keith Donohue, keith.donohue @nara.gov, 202-357-5365 for more information.

Award of Merit to New Mexico Board

Enlarge
Color postcard (c 1911). Pueblo of Isleta, New Mexico, on day of the harvest dance.
In conjunction with the annual NAGARA/CoSA Annual Meeting, a new joint State Board Award of Merit from the National Historical Publications and Records Board and the Council of State Archivists goes to the New Mexico Historical Records Advisory Board.

Implemented in 1999, the New Mexico Historical Records Advisory Board (NMHRAB) regrant program has successfully awarded 213 grants totaling $943,417 to local and tribal governments, state agencies, non-profit records repositories, and community libraries and museums. In 2014, the NMHRAB awarded $42,500 to seven grantees. With a relatively small pool of money, the board’s grant program was able to make a significant impact on strengthening the condition of and improving access to New Mexico’s historical materials.

The most recent round of regrants went to:

The Margaret Herrick Library at the Academy of Motion Pictures Arts and Sciences holds the Charles Guggenheim papers, currently being processed under the auspices of a two-year grant from the National Historical Publications and Records Commission. This collection documents works for film, television and other media that were directed and produced by Guggenheim Productions between 1954 and 2003. The files encompass more than 400 linear feet and consist largely of scripts, research materials, production materials and correspondence. 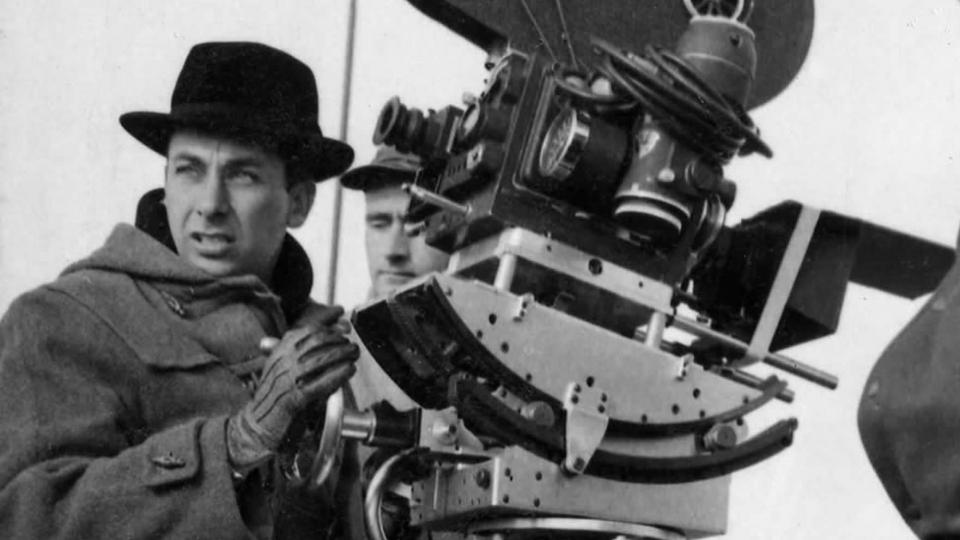 Enlarge
Charles Guggenheim at work, courtesy Margaret Herrick Library, Academy of Motion Picture Arts and Sciences.
Charles Guggenheim (1924-2002) devoted his life to documentary filmmaking over a career that spanned five decades and films that garnered 12 Academy Award nominations and four wins. He was also involved in political campaigns, including work with Robert F. Kennedy during his 1964 Senatorial race. He produced a biographical film for the candidate as well as a series of television spots relevant to the issues of the day. 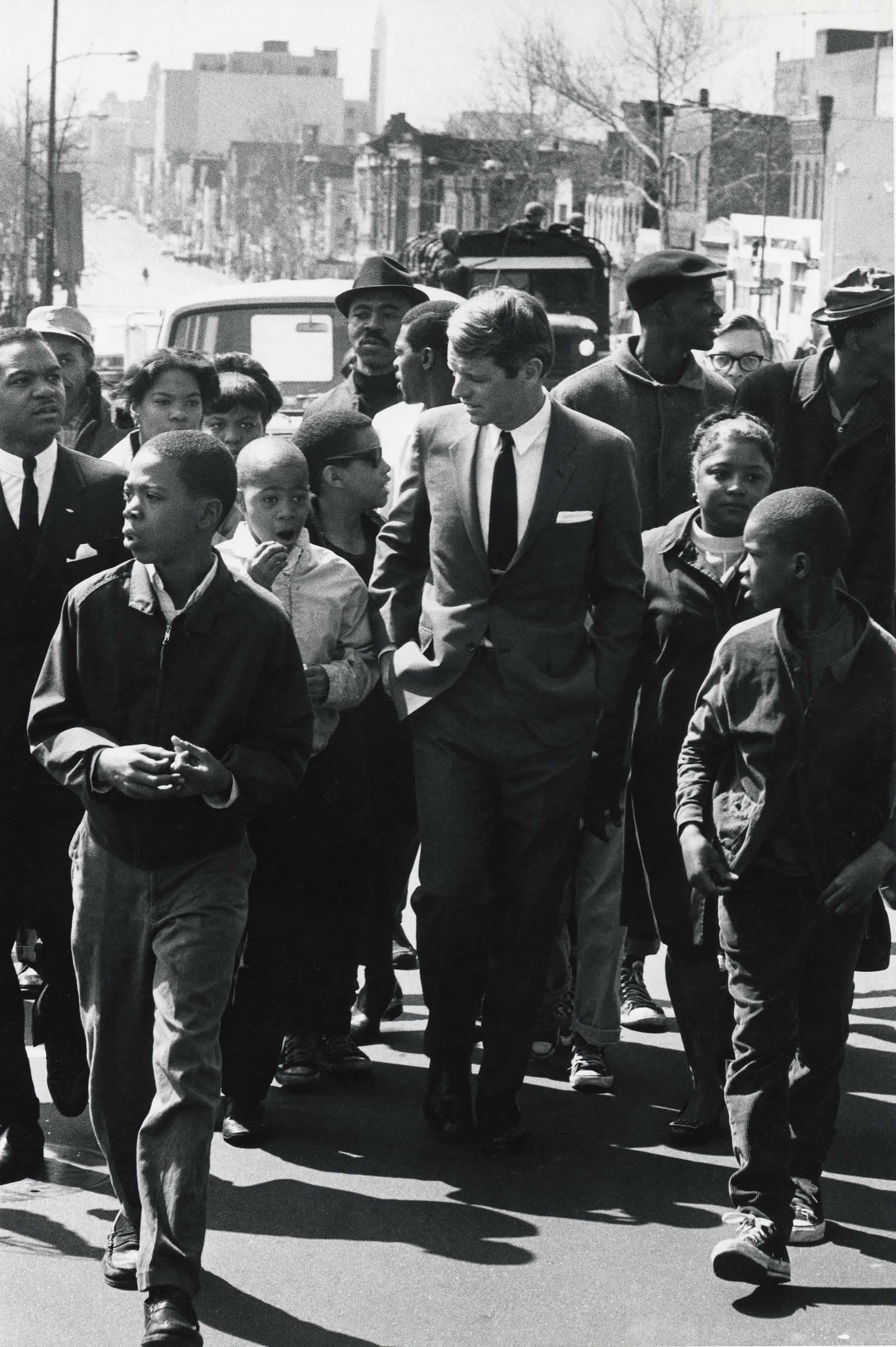 Enlarge
Production photograph from Robert Kennedy Remembered, 1968. Courtesy Margaret Herrick Library, Academy of Motion Picture Arts and Sciences.
After Kennedy was assassinated in June 1968, Guggenheim was approached to produce a fitting tribute to be shown at the Democratic National Convention on August 29, 1968. That film, Robert Kennedy Remembered, stilled the convention. In 2004, the Academy Film Archive acquired the vast majority of Guggenheim’s collection, including prints of most of his films, as well as original negatives, outtakes and production materials. 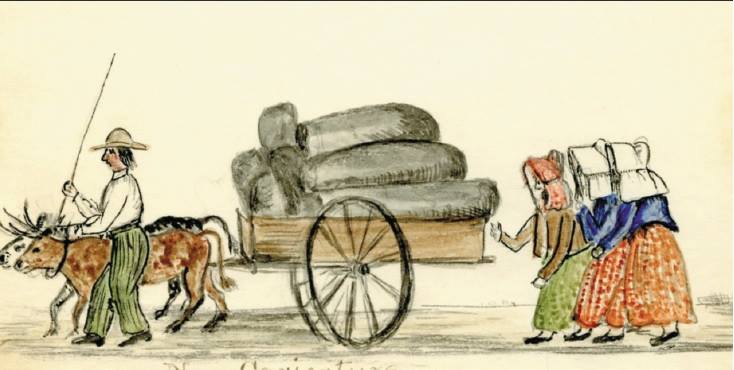 Enlarge
Delivering the Vanilla Crop, from the Abraham Paul Leech Letters and Sketches (1873Ã¢Â€Â“ 1874), in Pioneer Days in Florida.

Funded by the NHPRC at the University of Florida's George A. Smathers Libraries, Pioneer Days in Florida digitized over 45,000 pages of the rarest and most fragile materials, including all 19th-century materials from the Florida Manuscripts Collection. The content ranges from late colonial days through the Wars of Indian Removal, Civil War, Reconstruction, and into the early 20th Century. Items include 14 collections of family papers, 134 volumes of diaries and memoirs representing 40 different writers, and 240 folders of additional letters, reports, and sketches. Selections highlight some underrepresented topics, such as women pioneers, slavery and race relations, and the Second Seminole War.

The digitized materials document "the experiences and conflicts of native peoples, settlers, soldiers, and travelers during [Florida’s] turbulent 1800s," beginning when "settlers in Florida faced a harsh and alien environment, a patchwork of forts, ranches, and wilderness." They also paint a picture of Florida’s first land boom in the 1880s, and the development of the tourist industry. In its earliest years, the swamps and wetlands of Florida were as much a frontier as the Western mountains, deserts, and plains; travelers and frontiersmen often faced extremely harsh conditions in their search for prosperity in a new land. In its first two years the collection had just over 83,000 views. 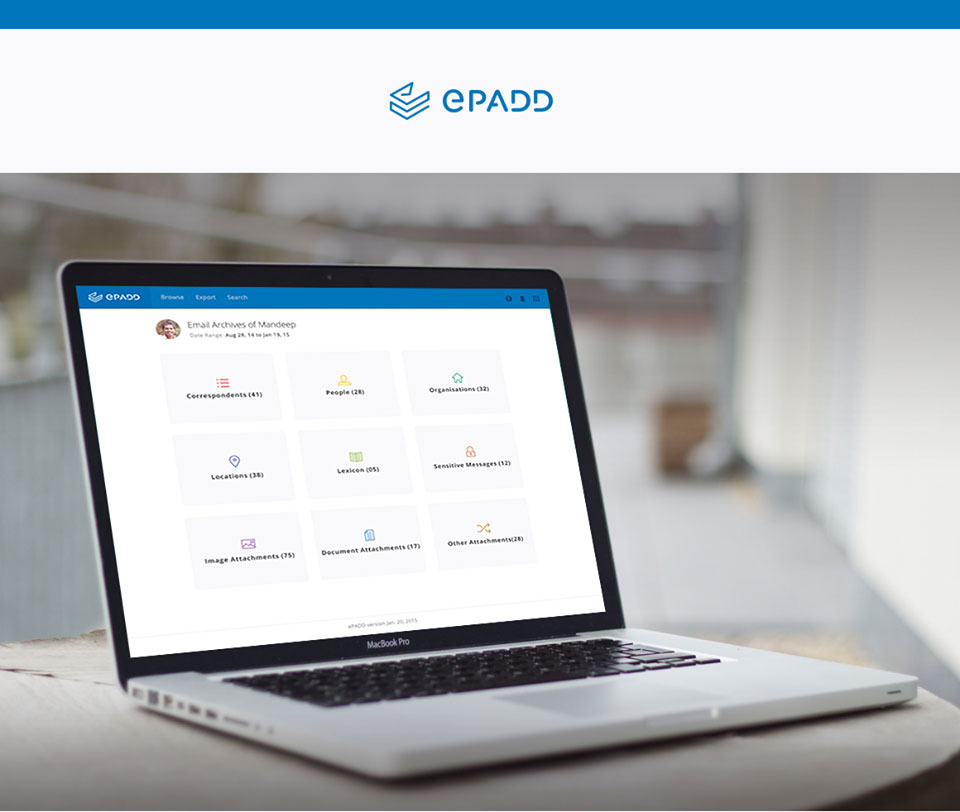 Enlarge
Dealing with electronic records--including email--is one of the major current challenges for archives. ePADD is an open source software package developed by Stanford University's Special Collections and University Archives that supports archival processes around the appraisal, ingest, processing, discovery, and delivery of email archives. The software was developed with grant funding provided through the National Historical Publications and Records Commission. Additional funding was provided through SUL’s Payson J. Treat Fund for Library Program Development and Research.

The ePADD Discovery Module for Stanford University's Special Collections & University Archives is accessible for download. You can read more about the project at https://library.stanford.edu/projects/epadd.

John Jay is getting some well-deserved ink. An Associated Press story on the this "forgotten" was picked up by hundreds of publications, including the July 4th edition of PBS's Newshour. 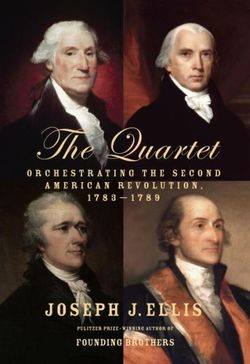 The Quartet: Orchestrating the Second American Revolution, 1783-1789, courtesy Knopf.
We had a chance to interview historian Joseph Ellis in conjunction with the publication of his new book, Quartet: Orchestrating the Second American Revolution, 1783-1789. In his book, Ellis points to four key figures that led the nation's from a loose confederation to a federal republic. Ellis had this to say about the Forgotten Founder:

"I guess my biggest surprise in writing The Quartet was John Jay. His papers are just starting to appear, and as they become public I predict that Jay's stock is going to rise, placing him in the top rank within the founding generation. His correspondence will reveal a distinctive temperament, a man who seems to know earlier than most where history is headed, a writer of letters on a par with Adams and Jefferson, and all this imbedded in a rich sense of irony and destiny. Adams, who was not predisposed to flattery, thought that Jay was the supreme diplomat of the revolutionary generation. When Washington was assembling his cabinet in 1789 he first approached Jay, offering him any office he wanted."

The NHPRC supports the work of The Selected Papers of John Jay project, a seven-volume letterpress and online edition launched under the direction of Dr. Elizabeth M. Nuxoll at Columbia University, which is being published by the University of Virginia Press as part of its Rotunda American Founding Era Collection. The new Selected Papers project uses the online Jay material available via the Papers of John Jay, an image database and indexing tool comprising some 13,000 documents (more than 30,000 page images) and will also provide links from document transcriptions in the letterpress and digital editions to the scanned page images.