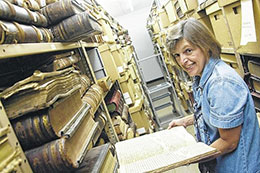 The Troup County Archives in LaGrange, Georgia was one of the first recipients of an NHPRC digitization grant. In FY 2007, the Troup County Historical Society received a grant to digitize County Court and Government Records.

It is one of the finest local historical societies in the country. In 2008, the Archives received the Council Exemplary Service Award from the Society of American Archivists.

Kaye Minchew served as a member of the board of directors of the National Association of Government Archivists and Records Administrators and testified before Congress in 2010 on behalf of the National Historical Records and Publications Commission, and she currently serves as a commissioner on the NHPRC. You can read more about her remarkable career and contributions to the historical records field in the LaGrange Daily News.

The NHPRC began working on a new Strategic Plan early in 2015. Following a May 2015 retreat of the Commission, we drafted a preliminary framework for Goals and solicited comments from the public. Over the next few months, we will be refining the plan, and you can follow the progress on our Annotation blog. A full presentation of this plan is available on YouTube at https://youtu.be/BV2ZVLupFJ0 that will provide some background and context for the work of the NHPRC and how we drafted this Preliminary Strategic Planning Goals Framework.

As we begin our Strategic Planning process, the Commission has met and discussed its enduring strengths, ongoing mission, current programming, and broad needs for the preservation and use of historical records. Out of this initial discussion, the staff has put together a preliminary overview of some future goals and directions for the Commission. Some of these ideas would require additional resources, including funding partnerships.

The primary role of the Commission is to provide opportunities for the American people to discover and use records that increase understanding of our democracy, history, and culture. To that end, the National Archives funds projects that publish collections of historical records—including documentary editions in print and online versions and digital editions online. Several challenges have arisen during this transitional period, and the Commission will use its regular programming and seek new funding to:

A key challenge ahead is to help grantees engage directly with people in their communities and online. Along with efforts for greater public engagement, archives are encouraging people to learn critical thinking skills and basic research techniques when seeking and using historical records in both analog and digital formats. The National Archives has enlisted Citizen Archivists in crowdsourcing, and the Commission will seek to broaden that practice and to:

Provide leadership through the National Archives.

The National Archives plays a key national leadership role in developing and promoting best practices, model programs, and partnerships among the nation’s vast network of archives and documentary editing projects. Through the Commission, the National Archives seeks to:

Adapt Commission practices to extend its reach and leverage.

The Commission seeks to encourage a more inclusive pool of applicants that represents the rich diversity of America’s culture and history. To that end, it will seek ways to demonstrate the public impact of its programming and to improve its internal management processes to:

Arabella Chapman and the Power of the Crowd 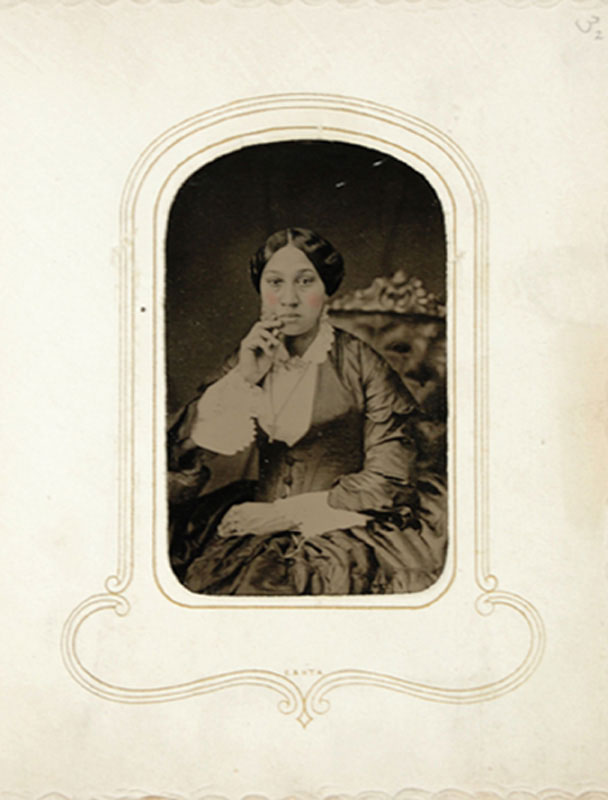 Enlarge
The Arabella Chapman Project is a great example of how archives connect with the classroom to harness the power of the crowd and make historical records vibrant.

It all started with an NHPRC grant to the Clements Library at the University of Michigan to create finding aids for over 1,600 "hidden" collections. Among the records were photograph albums which had originally belonged to Arabella Chapman (1859-1927), an African American woman from Albany, New York. The albums were assembled from 1878 to 1900 using portraits taken from the 1860s to the turn of the century. The photos include Arabella, her family, friends, and admirers, and copies of pictures of well-known public figures--including Lincoln, Douglass, and others.

During fall semester 2014, University of Michigan Professor Martha Jones's African American Women's History class embarked on a detailed examination of the albums to try to learn what they could about Arabella, her family and friends, and the role of photography in African American life in the late 19th century. 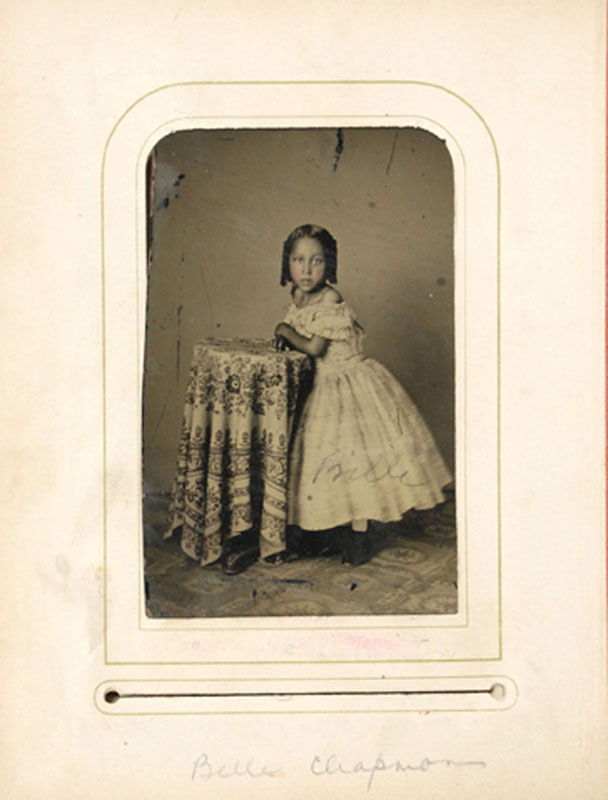 Enlarge
This past spring, the students launched a website devoted to the Chapman albums. The Arabella Chapman Project includes scans of the album pages, genealogical information, maps, texts on the history of photograph albums, a portal for crowdsourcing more information, and more. They've published a series of questions and mysteries behind the images. And they're using Social Media to reach out to a broader audience.

The Arabella Chapman Project is a fascinating approach to teaching history through historical records, and they are looking for your help. Recognize someone? Know something? Join the crowd in adding more layers to this piece of the American Story.

Kentucky was a key border state in the Civil War. While the elected government of Kentucky being decidedly Union, a group of Southern sympathizers formulated a plan to create a Confederate shadow government for the Commonwealth.

The Civil War Governors of Kentucky Digital Documentary Edition will be an annotated, searchable and freely-accessible online edition of documents associated with all five of the state’s Civil War governors, including the three Union governors, Beriah Magoffin (1859-62), James F. Robinson (1862-63) and Thomas E. Bramlette (1863-67), and the two provisional Confederate governors, George W. Johnson (1861-62) and Richard Hawes (1862-65).

An NHPRC grant will fund development of an "Early Access" website that will make approximately 10,000 documents searchable and available online prior to the launch of the full database, which will contain as many as four times that number of documents. This edition will focus on the period between November 1860, the date of Lincoln’s election as president, and the end of December 1865, roughly corresponding with the ratification of the 13th Amendment, which ended slavery.

Each of these national milestones signaled a pivotal change in Kentucky’s political and social order. Groundbreaking in its conceptualization, Civil War Governors of Kentucky will provide new ways to look at the society of this era. While all of the documents in CWG-K pertain to the business of the governor’s office, many of them also tell the stories of ordinary Kentuckians and provide insight into their thoughts as well as their actions. Users not only will discover forgotten or hidden history but also will be able to search the database to connect and analyze political, business, social and familial information in ways that previously would have been difficult, if not impossible. 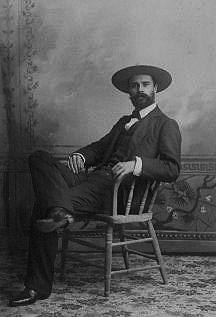 Owen Wister in Yellowstone Park, 1890s. American Heritage Center
"When you call me that, smile!" That famous line is from The Virginian when our hero is called a "son-of-a--" by a crooked card player in a poker game. The writer behind those words, Owen Wister, was anything but a cowboy.

Owen Wister (1860 – 1938) was an American writer and father of western fiction. He is best remembered for writing The Virginian (1902), which was the best-selling book in America for two years and has become one of the iconic Westerns in American culture. Although he was prolific, writing plays, essays, novels, short stories, biographies, and an account of his lifelong friendship with Theodore Roosevelt, he would never write another western after The Virginian. 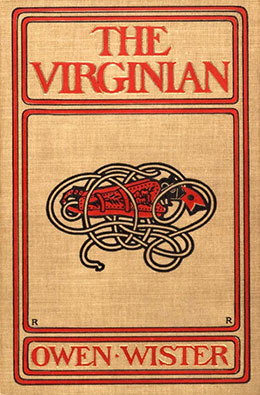 You can access the Finding Aid at http://rmoa.unm.edu/docviewer.php?docId=wyu-ah00290.xml and read John Nesbitt's account "Owen Wister: Inventor of the Good-guy Cowboy" at Wyoming History.

Enlarge
Thomas Edison Talking Doll, Collection of Robin and Joan Rolfs/Courtesy of Thomas Edison National Historical Park
Talking dolls are spooky, but perhaps none more so than the ones created by the Thomas Edison Company over a century ago.

In the late 1880s, Thomas Edison and his collaborators created the world's first talking doll, and you can see one now at the Smithsonian's National Museum of American History's new permanent exhibition "American Enterprise."

The doll proved to be one of Edison's commercial failures. They were expensive, hard to understand, and fairly fragile. After losing money on the invention, Edison called the dolls his "little monsters."

The story behind this doll is Smithsonian Magazine article, The Epic Failure of Thomas Edison's Talking Doll, and hear the dolls' recordings fully and eerily restored. You can read more about the history of Edison Talking Doll Recordings, 1888-1890 on the website of the Thomas Edison National Historical Park.

Assisting in telling the story of the Edison talking doll were the staff of the Thomas A. Edison Papers Project at Rutgers University, one of the most ambitious editing projects ever undertaken by an American university. For decades, the 5 million pages of documents that chronicle the extraordinary life and achievements of Thomas Alva Edison remained hidden and inaccessible to members of the general public. Since the massive project began in 1978, a team of editors/scholars has been turning this incomparable trove of Edisonia into a premier educational resource, with the assistance of grants from the NHPRC.

Access the Finding Aid and digitized image at Document File Series -- 1889: (D-89-64) Phonograph -- Talking Doll [D8964]. This folder contains correspondence, reports, and other documents concerning the manufacture and promotion of Edison's talking doll. Many of the documents pertain to the organization and management of the Edison Phonograph Toy Manufacturing Co. Included also are letters requesting dolls or asking for information about them. 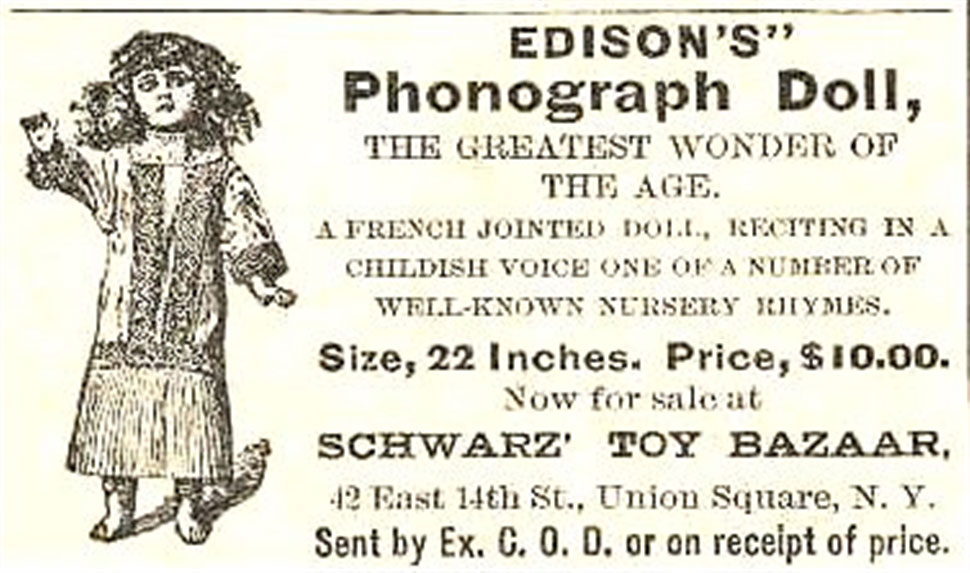