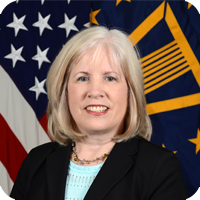 Ms. Karen Finnegan Meyers, director of the Executive Services Directorate, Washington Headquarters Service, has been appointed to the National Historical Publications and Records Commission, representing the Department of Defense.

As Director of the Executive Services, Ms. Meyers leads the Directorate that provides knowledge management, information security and graphics services to the Office of the Secretary of Defense. Prior to her service at Defense, Ms. Meyers was Chief of the Programs and Policies Division in the Office of Information Programs and Services at the Department of State. She served as the first Deputy Director of the National Archives and Records Administration’s Office of Government Information Services, which Congress created in 2007 to offer mediation services to resolve disputes between Freedom of Information Act requesters and Federal agencies, and to review agencies’ FOIA policies and procedures. In this capacity, Ms. Meyers helped to define its role as the Federal FOIA Ombudsman. Ms. Meyers earned a Bachelor of Science degree in the Administration of Justice from The Pennsylvania State University and a Juris Doctorate from Temple University School of Law.

Archivist of the United States David S. Ferriero will award 31 grants totaling $3,468,729 to projects in 26 states and the District of Columbia, pending appropriations of a final budget for FY 2019. The National Archives grants program is carried out with the advice and recommendations of the National Historical Publications and Records Commission at its November meeting. A complete list of grants is at http://www.archives.gov/nhprc/awards/awards-11-18. 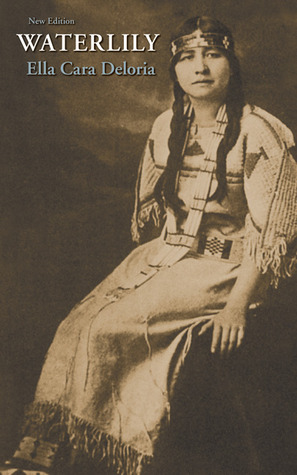 Ella Deloria, anthropologist, linquist, and Lakota language speaker. Her collected papers will be accessible through the grant to the Standing Rock Sioux tribe.

Through its Access to Historical Records: Major Initiatives program to assist archives and historical records repositories collaborate and take on large-scale challenges, six projects were awarded:

Publishing grants went to seven publishing projects: the papers of John Adams and the Adams Family, Eleanor Roosevelt, Presidential Recordings, Civil War Governors of Kentucky, the Notebooks of John Cotton Jr., and the Documentary History of the Ratification of the U.S. Constitution and Adoption of the Bill of Rights. Eighteen grants went to state historical records advisory boards to carry out their mission to strengthen the nation’s archival network.

We are looking for applications from organizations that will make collections from small and under-represented archives more readily available for public discovery and use. The grant program will fund Archives Collaboratives to share best practices, tools, and techniques among partners; assess institutional strengths and opportunities; and develop plans and management structures for long-term sustainability and growth.

Applications for planning grants are due April 4, 2019. The collaboratives must consist of three or more organizations that may:

More information on this new grant program to pilot Archives Collaboratives is available at https://www.archives.gov/nhprc/announcement/collaboratives

This program has two phases. You must first submit a Preliminary Proposal, and successful applicants from the preliminary round will be invited to submit a Final Proposal

Remembering the Nurses from the Great War 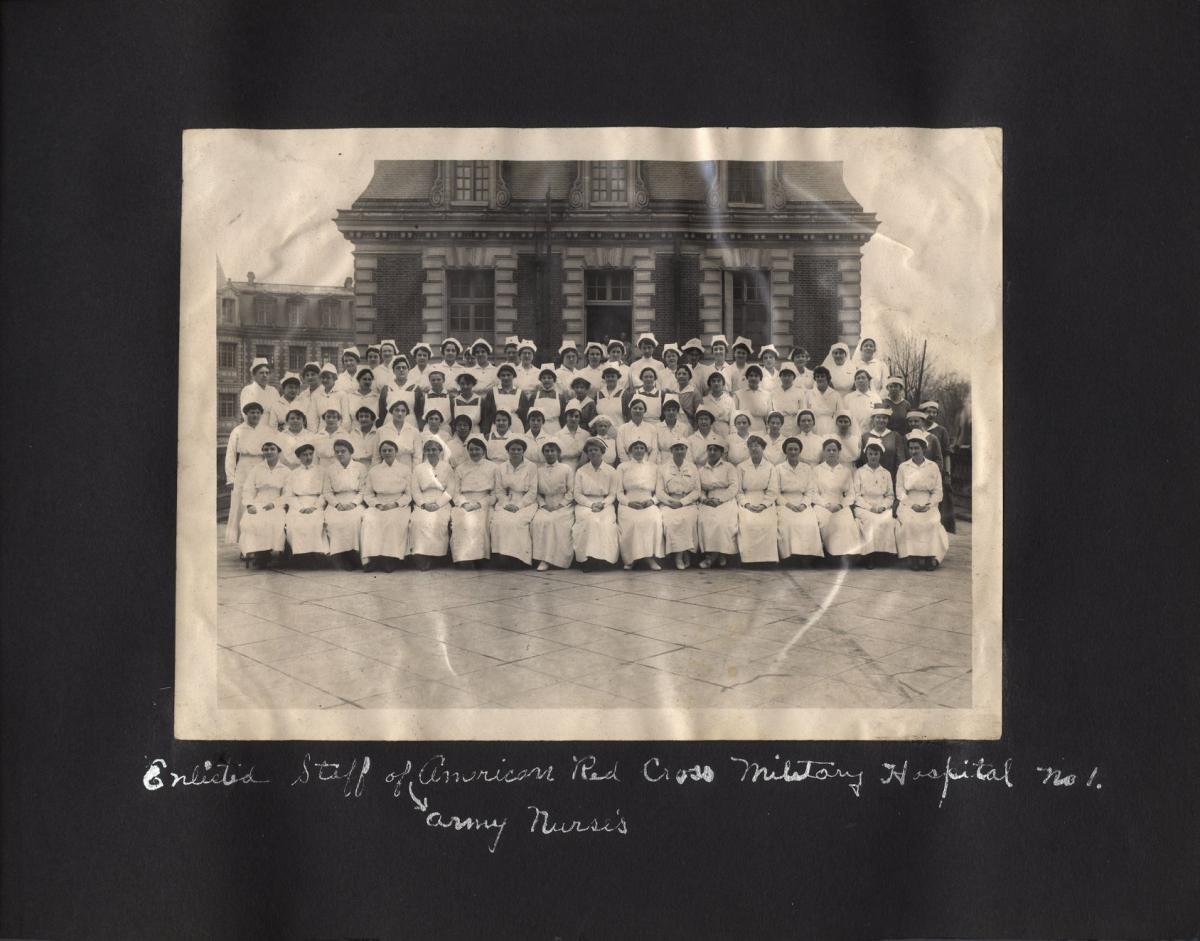 The NHPRC has helped preserve those memories through a grant to digitize the records of the Women's Overseas Service League's oral history collection. Founded in 1921 by women who had served in World War I, WOSL initially existed as local units, but soon became a national organization. Michigan State University, in partnership with the University of Texas-San Antonio, processed and digitized 162 audio interviews with American women who served overseas during World War I, World War II, the Korean War, Vietnam War, and the Gulf War.

This is photograph from the U.S. National Library of Medicine of enlisted Army nurses at the American Red Cross Military Hospital #1 at Neuilly-sur-Seine, France. You can listen to an interview with one of the nurses, Alta May Andrews Sharp who talks about her service in the American Red Cross and the U.S. Army Nurse Corps during World War One.

Sharp says that she served in the Red Cross for two years at "Military Hospital No. 1" as chief nurse in ward 83, before finally volunteering for the Army. She talks about her basic training, learning to salute, the voyage to England in a convoy escorted by sub-chasers and battle ships, sleeping in her life jacket, and having lifeboat drills daily. She says that she was stationed in France and discusses her duties, her pay, her quarters, her gray chambray uniform with the "butcher’s apron," and being shelled by the huge German artillery gun known as "Big Bertha." Sharp says that the nurses were treated well but were prohibited from dating enlisted men and that the officers were only interested in French girls. When they learned of the Armistice she says that she and her friends traveled to Paris to celebrate "all day and night." Ends abruptly. Hear the interview at https://d.lib.msu.edu/wosl/112

The Fairy Queen and Her Baby Court 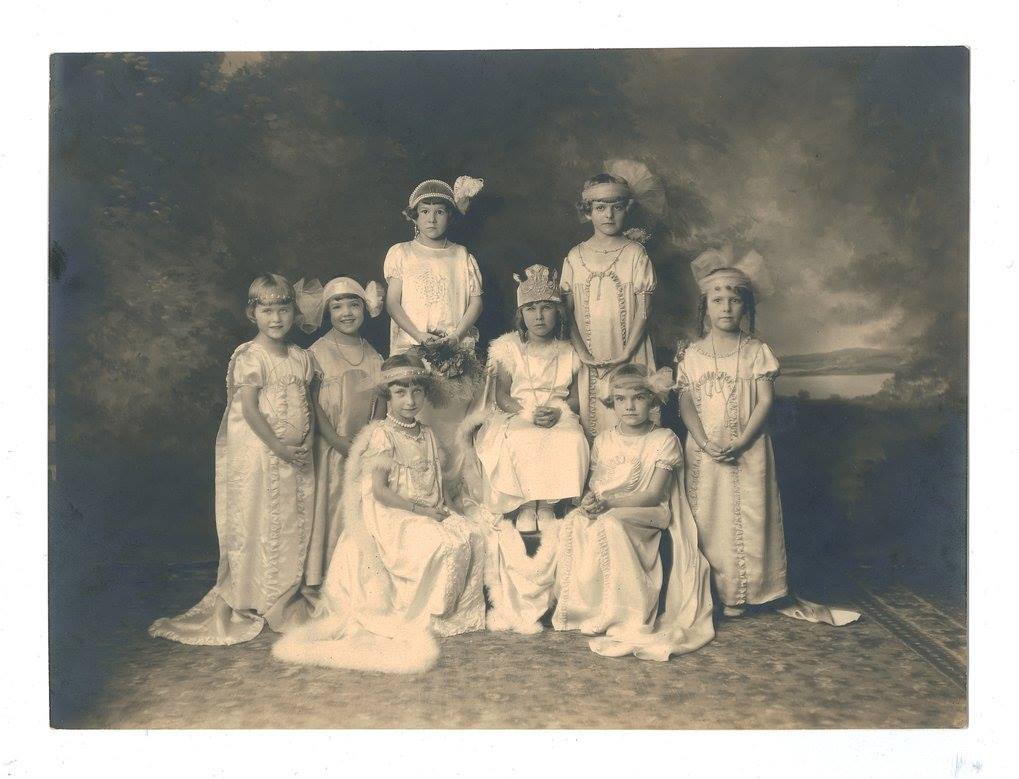 Kansas Memory is a wonderful online resource for primary sources online from the Kansas Historical Society and local historical repositories across the state.

From 1911 to 1929, El Dorado, Butler County, Kansas celebrated kafir corn, imported from Africa, that proved an economic boom, and the community created the Kafir Corn Carnival to mark the triumph of the crop. It was a three-day event in Kansas's largest county. In addition to a Kafir Corn Queen, there was a children's version of the court.

The National Historical Publications and Records Commission awarded a grant to the Kansas State Historical Records Advisory Board, which in turn made a number of regrants throughout the state for local archives. One of the regrants went to the Kansas Oil Museum, which documents the history of agriculture and oil in Butler County, but has been largely inaccessible to the public except by appointment. This project made a portion of the collection available online through Kansas Memory at https://www.kansasmemory.org/locate.php?categories=11928-13685&.

Back in the early days of the National Archives grants program, we were able to fund a number of projects at the Smithsonian (though now the law has changed and we do not fund projects at other Federal agencies). 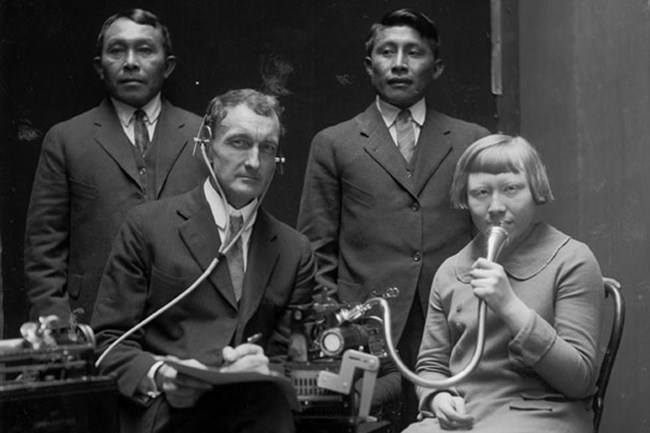 One of the great collections we helped support was the John Peabody Harrington Papers. Peabody (1884–1961) was an American linguist and ethnologist who dedicated his life to recording the lives and languages of the Native American tribes in California whose cultures faded as their numbers dwindled. This is a comprehensive microfilm repository of more than 750,000 documents – the largest collection of anthropological field notes ever seen at the Smithsonian.

The papers include extensive information on tribal boundaries, local geography, folklore, ceremonies, music, ethnobiology, and material culture. The collection includes documentation on over 130 languages, many of which are now highly endangered or no longer actively spoken. J. P. Harrington carried out his research in much of North America during the first half of the 20th century. The majority of the collection represents ethnological and linguistic fieldwork in California and with Native people in the Southwest, Great Plains, and Alaska. J. P. Harrington’s research also extended into southern Mexico, across much of Canada, and along the eastern coast of the United States.

Go to the Finding Aid for more on this fantastic collection. 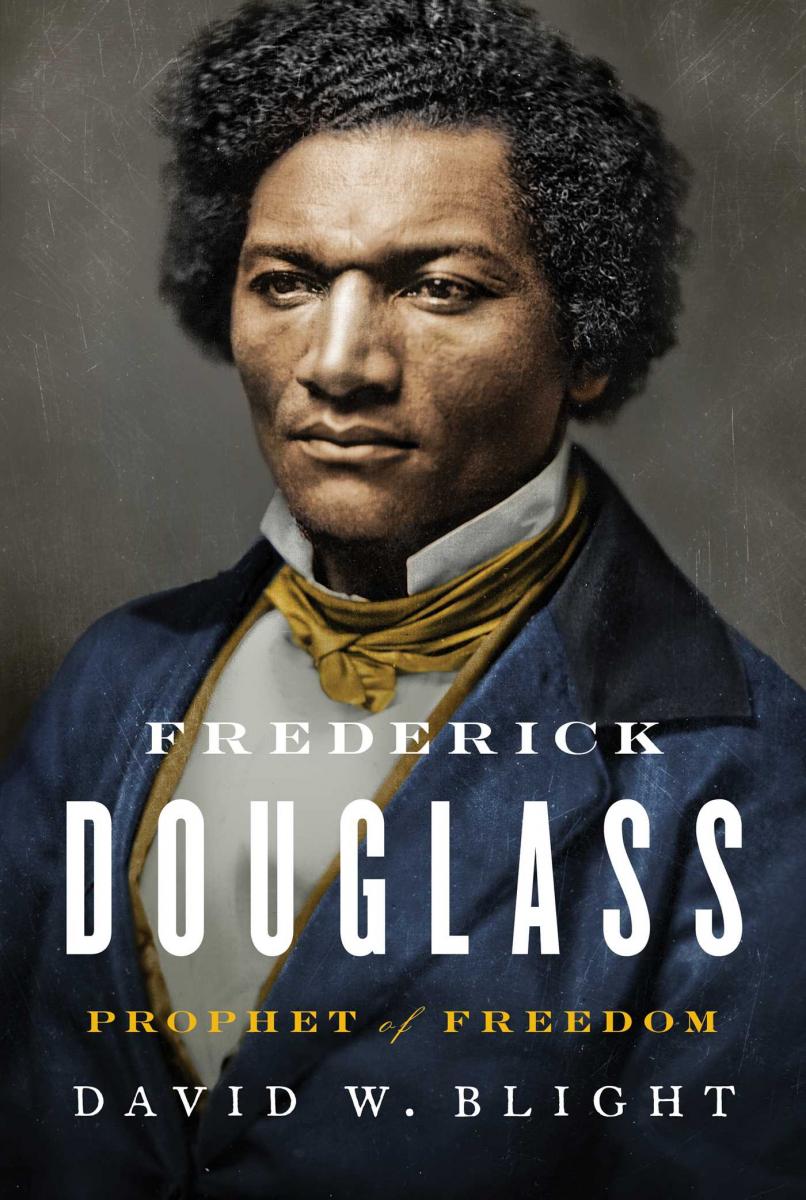 “No man can put a chain about the ankle of his fellow man without at last finding the other end fastened about his own neck.” -- Frederick Douglass, Proceedings of the Civil Rights Mass Meeting at Lincoln Hall, Washington, DC, October 22, 1883

Named a NEW YORK TIMES and TIME "Top 10 Book of the Year," David Blight's biography of Frederick Douglass tells the gripping story of the escaped slave who became the greatest orator of his day and one of the leading abolitionists and writers of the era. Read more about this biography at https://www.simonandschuster.com/books/Frederick-Douglass/David-W-Blight/9781416590316

One of the resources that made Blight's book possible was the Frederick Douglass Papers Edition, which originated in 1973 at Yale University, as a result of consultations among the National Historical Publications and Records Commission, the Association for the Study of African American Life and History and John W. Blassingame, Professor of History at Yale.

For almost twenty years project was housed at Yale University, staffed by scholars at that institution. From 1992-98, West Virginia University housed the project, and now the Frederick Douglass Papers resides at Indiana University-Purdue University, Indianapolis (IUPUI). The NHPRC has supported this landmark project for decades.

To find out more, go to Frederick Douglas Papers project. 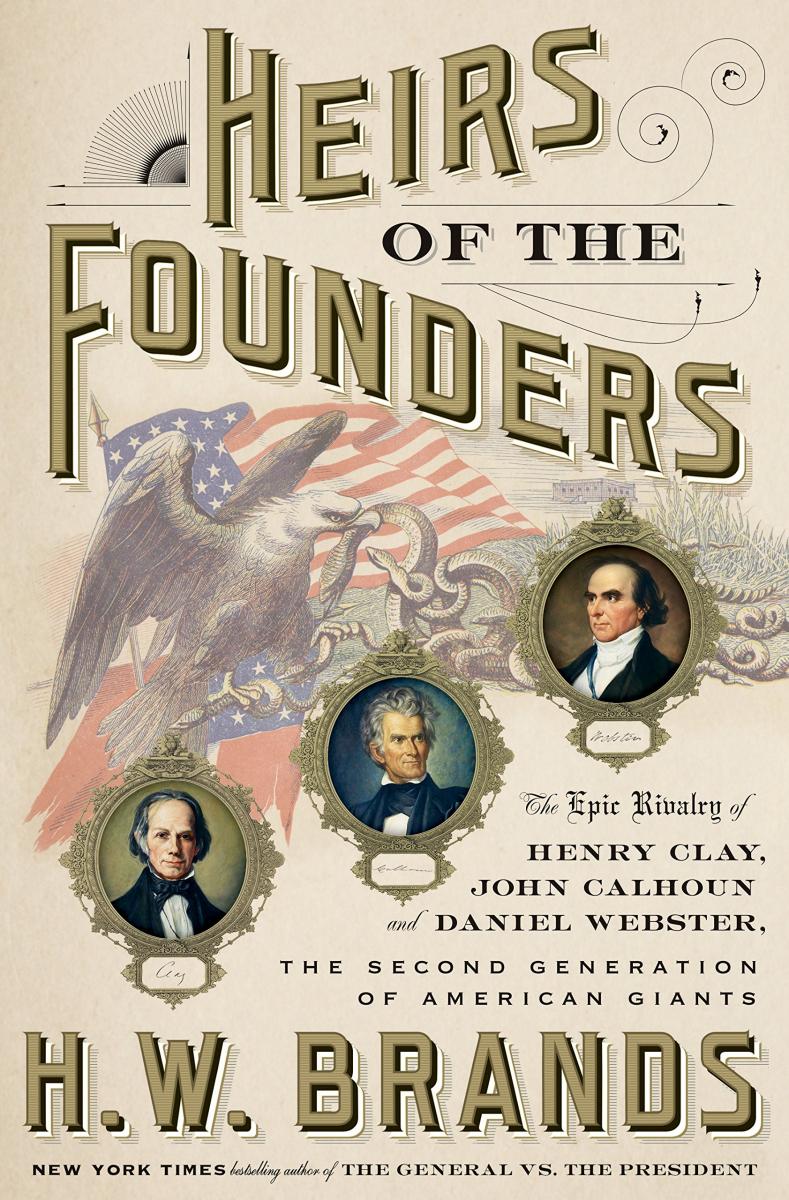 While the Founders of the United States rightly deserve our attention, there was a profoundly influential group of statesmen that inherited the new nation. H. W. Brands's new book, Heirs of the Founders: The Epic Rivalry of Henry Clay, John Calhoun and Daniel Webster, the Second Generation of American Giants of this new set of political giants who battled to complete the unfinished work of the Foundiers and decide the future of our democracy recently was published by Doubleday.

The National Archives, through the NHPRC, provided grant funds to three documentary editions of the papers of Clay, Calhoun, and Webster. Brands calls these editions "the primary-source backbone” of the book. 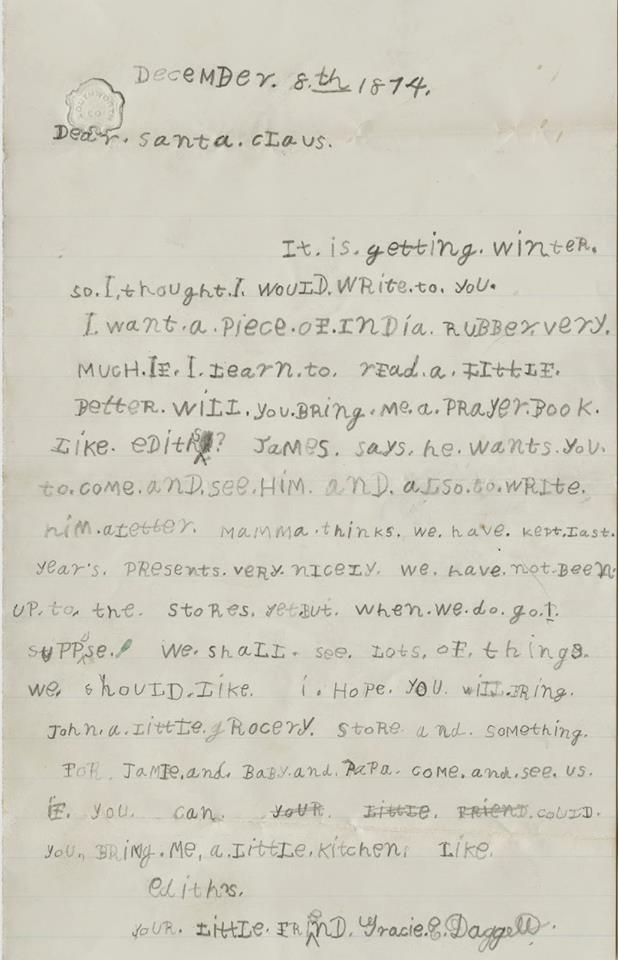 Perhaps one thinks of the old letters to Santa in an archives at the North Pole, but this gem resides in the Clements Library at the University of Michigan. As part of an NHPRC-supported project to process assorted manuscript collections, the Clements's Mary Jane Daggett family collection includes this 1874 letter from his "Little Friend" Gracie E. Daggett who would like a piece of India rubber, a prayer book, and a "little grocery store." Gracie's younger brother, John, also wrote a letter to Santa Claus, confessing to being "one of the naughtiest boys in town."

The NHPRC grant went to support a project to process 1,661 manuscript collections and photograph albums from the William L. Clements Library concerning 18th, 19th, and 20th century persons and events. Over two-thirds of these materials pertain to women, Native Americans, and African Americans.

You can read more about the Clements's Christmas-themed highlights at https://theclementslibrary.blogspot.com/2014/ and peruse the Finding Aid for the Mary Jane Daggett collection.