The National Historical Publications and Records Commission will meet on Thursday, November 21, 2019 at the National Archives in Washington, DC. The public is welcome to attend the first part of the meeting on policy discussions. If you wish to do so, please register by email to nhprc@nara.gov by November 19.

This program has two phases.

You must have been invited to submit a Final Proposal

Ghosts in the Appalshop Archives

Since its founding in 1969, Appalshop in Whitesburg, Kentucky has had as its mission to document, disseminate, and revitalize the lasting traditions and contemporary creativity of the Appalachias. The Appalshop Archive grew out of this mission and works to preserve the creative output and history of the independent, non-profit organization, as well as orphaned media materials and other collections that help enrich our understanding of the history, culture, art, and social issues of central Appalachia.

A grant from the NHPRC helped process, re-house, and make accessible the audio-visual recordings of Mountain Community Television (1972-78) and the Headwaters Television series (1981-85). As part of that work, they’ve made available for Halloween a fiendish yarn from Roadside Theater's GHOST STORIES. In this mountain tale, a young gambler named Jack matches the Devil in a game of cards. To avoid a beheading he must placate the old villain by performing a series of ever more demanding tasks. Luckily, Jack gets a little help from the Devil's daughter.Check out the Appalshop Archives at https://www.appalshoparchive.org/ Fremont's expedition in the Rocky Mountains. Courtesy Library of Congress

"Frémont came through here about 1842 and mapped this country around Fort Collins and over across the mountains. And what we call 'North Park' he called on his map 'New Park.' And what we call 'Middle Park' west of Denver, he called 'Old Park.' And then when he went down into South Park, west of Colorado Springs, that was 'South Park' or 'Bayou Salade'--ah--'Salt Spring,' really and that came from -- well, Cajun French, which was modified from Choctaw Indian, 'Bayou Salade.' Well, we got a habit then, of calling many of our valleys in Colorado 'Parks' and so we have Pingree Park, and Estes Park, Moraine Park, and then Horseshoe Park, and so on."

"We used to say that...no Englishman ever got anywhere in this country out here that a Frenchman hadn't already been. (laughter) And so we had a lot of French names. Grand Teton, Dovant, DuBois, Dunoir, La Porte, Cache la Poudre, Laramie, and so on. There ware only about seventeen thousand Frenchman in the United States -- what is now the United States in 1700. Most single men, scattered through the west. And fur trappers, living with the Indians, carrying on the rendezvous after furs became a profitable venture and about a hundred and sixty thousand Spanish in 1700, up in the southwest. About three hundred and sixty thousand British -- English, mostly along the eastern seaboard -- in villages. So that was the way things got started then as far as names are concerned."

From an oral history with Dr. Jack Wager in 1977. In the early 1970s, local historian Charlene Tresner first established a Fort Collins oral history project to collect the memories of people residing in Fort Collins and Larimer County. The Fort Collins Local History Archive has nearly 400 oral histories in the collection. You can read the whole transcript at https://fchc.contentdm.oclc.org/digital/collection/oh/id/772/rec/12 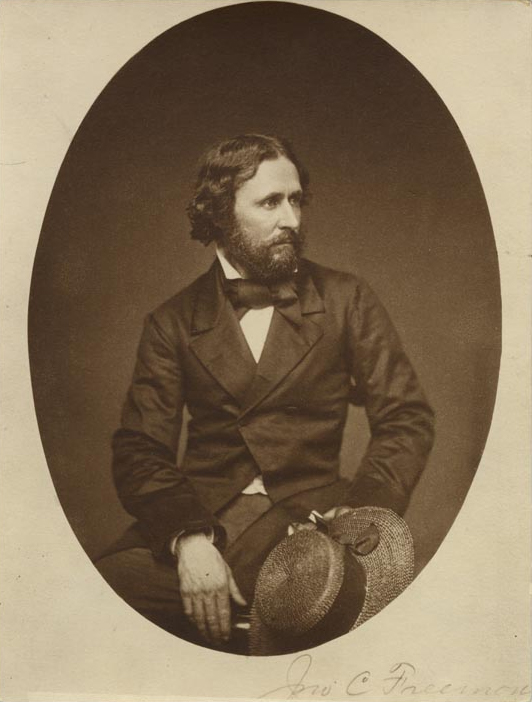 Now through a grant from the NHPRC to the Colorado Historical Records Advisory Board, which awarded regrants to local projects, the Fort Collins Museum of Discovery is undertaking a digitization and transcription project of these interviews.

The Fort Collins History Connection--a collaboration between the Poudre River Public Library and the Museum of Discovery--is a wonderful resource of local history. More at https://history.fcgov.com/

Moving Image Preservation of Puget Sound is a Seattle-based non-profit working with local libraries, archives, museums, and more to reformat their analog tapes. MIPops helps heritage organizations develop the skills and know-how to bring their old videotapes into the digital future.

The NHPRC awarded MIPoPs a Major Initiative grant to support a collaboration with the Seattle Municipal Archives, Seattle Public Library Special Collections, University of Washington Ethnomusicology Collections, and University of Washington Special Collections to process and create online descriptions for four videotape collections, digitize 1,228 tapes and make them available online, and train a representative at each institution in best practices and methods in digital conversion of videotape. Collections include the Seattle Channel Collection on community and cultural affairs; the Donald Schmechel Oral History Collection of oral histories of 65 individuals prominent in Seattle’s growth; the Vi Hilbert Collection on coastal Salish language, songs, stories, and culture; and the Doris Chase Collection on Northwest women’s issues.

On October 30, MIPoPS will be part of the Seattle Archives Fair at the Seattle City Hall. For more information, visit www.MIPoPS.org or at their Facebook page: https://www.facebook.com/mipopsseattle/

During the Civil War, Kentucky was one of a few border states where tensions between the Union and Confederacy ran high. At the beginning of the war, Kentucky officially declared its neutrality, but after a failed attempt to take the Commonwealth for the Confederacy, the legislature petitioned the Union Army for assistance. After early 1862 Kentucky came largely under Union control. 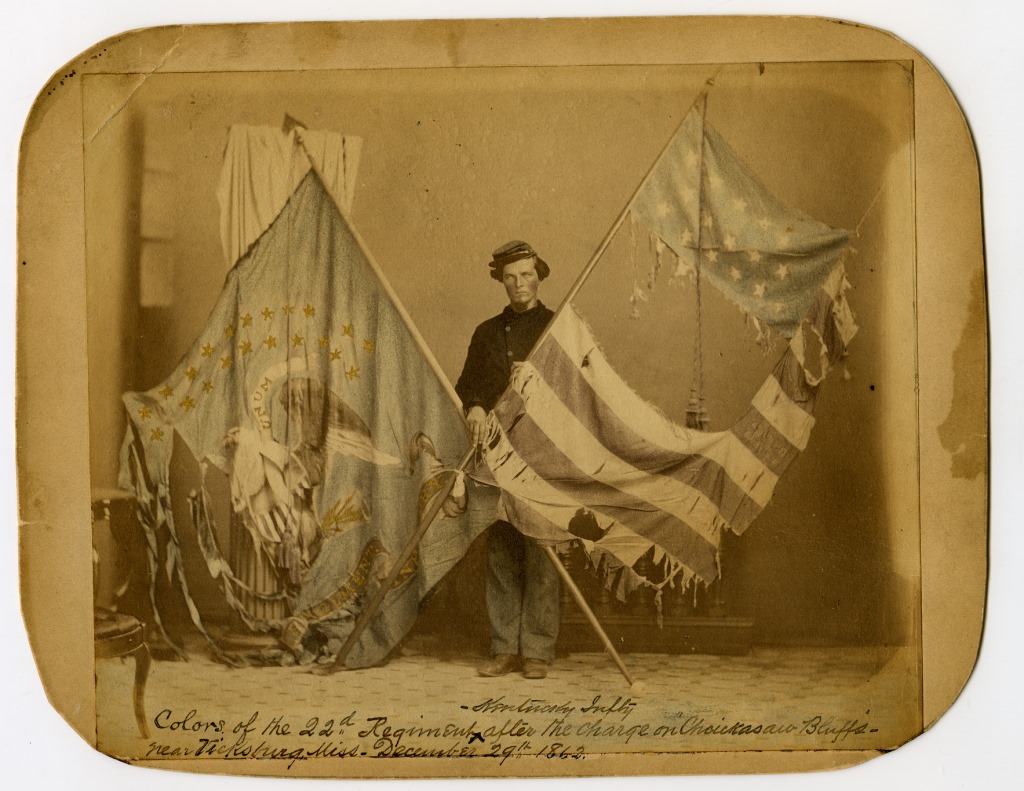 Colors of the 22d Regiment Kentucky Infantry after the charge on Chickasaw Bluffs near Vicksburg, Mississippi – December 29th, 1862.

The Civil War Governors of Kentucky project http://discovery.civilwargovernors.org/, supported by the NHPRC, documents not just the papers of the five Kentucky governors during the War, but it is also about reconstructing the lost lives and voices of tens of thousands of Kentuckians who interacted with the office of the governor during the war years. CWGK is working to identify, research, and link together every person, place, and organization found in its documents. This web of hundreds of thousands of networked nodes will dramatically expand the number of actors in Kentucky and U.S. history, show scholars new patterns and hidden relationships, and recognize the humanity and agency of historically marginalized people.

On the project's website, there is this wonderful image of the Colors of the 22d Regiment Kentucky Infantry after the charge on Chickasaw Bluffs near Vicksburg, Mississippi – December 29th, 1862. Colonel George W. Monroe returned the battle flag of his 22nd Kentucky Volunteer Infantry to the Commonwealth in 1864. “This Old flag is dear to us, for beneath its folds many of our brave comrades have fallen, and sealed their patriotism with their blood. It is dear to us for the victories won under it. It is dear to us because it has never yet been lowered before the enemy, and has never been polluted by traitor hands.”

You can read his full letter to Governor Bramlette at http://discovery.civilwargovernors.org/document/KYR-0001-003-0064

From Founders Online, supported by the NHPRC, here’s some common sense from John Quincy Adams in a speech he gave as a student to the A. B. Club at Harvard, recorded in his diaries, November 12, 1786: 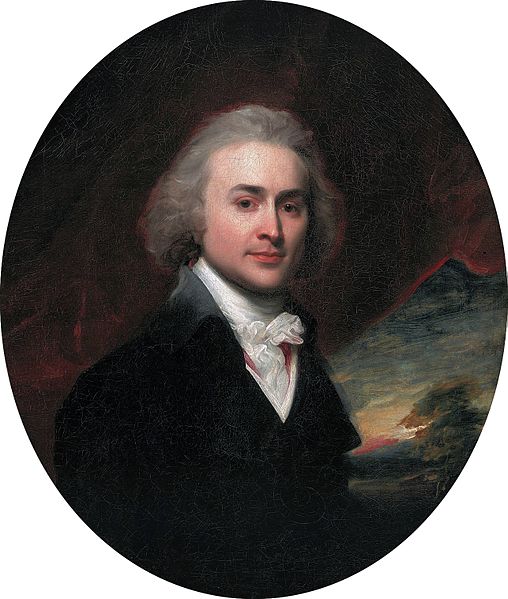 "I have often endeavoured to account for this proneness in the human mind, to whatever is marvelous, and I believe it can be attributed only to a strange combination of the powers of imagination and reason. It is a fundamental maxim, that nothing can exist without a cause: to gratify the curiosity of knowing those Causes, which is inherent in the human mind, is the business of natural, and moral philosophy: but their progress is always extremely slow; and as they can judge only from the concurrence of so many circumstances, as prove a fact to demonstration, they are upon every new and extraordinary occasion, forced at least to suspend their decision for a time; they are frequently obliged, to acknowledge, their ignorance, and the impossibility of obtaining a clear and distinct view of many things. But our Imagination is too impatient to be contented with a partial knowledge of any thing: if she cannot discover the real causes of things, she is ever ready, to invent fictitious; and she has almost always sufficient influence in the human mind, to induce it to adopt her own chimaera’s. From these causes, arose probably, the ideas of ghosts, spirits, fairies, witches, and all those imaginary beings, of whose existence, the ignorant, (and consequently superstitious), of all ages, have never doubted. Hence likewise the fictions of astrology, and the confidence, placed in dreams, even by men, whose minds enlightened by Science, should soar, above those Clouds of the imagination, into the serene atmosphere of truth: hence the still more extravagant belief, that the flight of birds, or the entrails of an ox or a sheep, would discover, what should be the success attending any enterprize; and although mankind in general, at this day, are no longer imposed upon by these absurdities, yet it must be confessed, they are influenced by others equally contrary to reason, and common Sense. See a party at cards! If one of them be very unlucky, he will wish to change his seat, as if the chair he sit in, had any connection with the cards he is playing; ask the captain of a vessel, all ready to sail, and with an excellent wind, why he remains in the port? Because he is afraid to set sail, on a Friday; as if the success of the voyage, was to depend, upon the day of the departure. These, and many other notions of the same kind, of which we are daily made witnesses, sufficiently evince, that superstition is far from being entirely exploded, or even from being confined to the most ignorant and illiterate class of people; if we examine ourselves, with a severe, and impartial eye, few of us, I believe, will be able to say, that we are never influenced by this disorder of the imagination: but as it can never be serviceable, either to ourselves or to any of our fellow creatures, as it may be essentially injurious to society, and as it must infallibly tend to make us unhappy, it ought constantly to be our endeavour, to overcome every weakness of this kind, and to reduce, not only our conduct, but likewise our opinions and sentiments to the standard of unerring Reason."