The Andrew W. Mellon Foundation in partnership with the National Historical Publications and Records Commission (NHPRC) has awarded grants of $1 million each to three Digital Edition Publishing Cooperatives (DEPC) that, together, will help build a sustainable system for digital publication and discovery of historical records.

The experimental Digital Edition Publishing Cooperatives Program, first announced as a partnership between the Mellon Foundation and the NHPRC in 2017 was designed to address the challenges and opportunities of publishing and sustaining digital editions through cooperative efforts.

The three DEPC grants will go to:

Bucknell University’s Liberal Arts Based Digital Editions Publishing Cooperative (LAB Cooperative) will develop an end-to-end online editorial production, publication, dissemination, and preservation framework for standards-based, interoperable, sustainable, and preservable digital scholarly publishing. A partnership of Bucknell University, the Canadian Writing Research Collaboratory, and Newcastle University, the Lab Cooperative supports an expanding portfolio of peer-reviewed digital editions and edition clusters. Together the partners will produce a production and dissemination platform named LAB|Pro (the LAB Production and Publishing Platform), and in collaboration with the Bucknell University Press will develop the Bucknell Digital Press as the credentialing and marketing vehicle for the Cooperative. This will be accomplished by establishing shared physical, software, and human infrastructure across institutions; supporting scalability, interoperability, and preservation; allowing for dynamic, iterative, and collaborative editing; and integrating best practices for scholarly peer review.

The Primary Source Cooperative is a collaboration among the Massachusetts Historical Society and its member editions, in partnership with the Digital Scholarship Group at Northeastern University, to publish online contextualized and annotated archival records for scholarly and public access.  The Cooperative, consisting of four founding editions (the John Quincy Adams Digital Diary, the Roger Brooke Taney Papers, the Catharine Maria Sedgwick Online Letters, and the Ellen Swallow Richards Papers), will lead users to a deeper understanding of the forces of reform and revolution that marked 19th century America. Most of these projects lacked ready access to a portal for digital publishing. During the planning phase of the project, the Cooperative created tools that facilitate a digital editorial workflow and cemented a mutual understanding and mission among the editors. The implementation grant will bring those tools into full production and transition to a full-fledged cooperative with established governance policies. The model established by the Cooperative will make the editorial standards and systems, custom software tools, and governance documents all open source for institutions or informal groups that have similar opportunities to support the creation of digital editions.

University of Virginia
UVA Digital Publishing Cooperative: Infrastructure for the Creation, Publication, and Discovery of Digital Scholarly Editions and Projects

The UVA Digital Publishing Cooperative (DPC) forges a relationship between two leading groups in the field of documentary editing: the University of Virginia and Digital Edition Publishing Cooperative for Historical Accounts. The goal of the DPC is to build the necessary infrastructure to facilitate and support the conceptualization, development, publication, discovery, preservation, and sustainability of digital editions and projects. Over the next three years, individuals and organizations from around the globe will collaborate on building the technical and human infrastructures necessary to make such a publishing pipeline possible. More than 30 leaders from the fields of textual editing, history, and digital humanities will  address the critical issues, challenges, and opportunities that currently face the field of documentary editing: 1) the lack of accessible and robust digital editorial and publication platforms; 2) the issues of standardization versus customization, both within the editorial process and integrated into technical systems; 3) the need for diverse publication outputs; and 4) the immense potential for discoverability, increased accessibility, and expansion of audience.

Archivist of the United States David S. Ferriero said, “At the National Archives, our mission is to make historical records accessible.  We are honored to have initiated this groundbreaking work with the Mellon Foundation to address critical needs for the digital publication and sustainability of digital editions of historical records. These cooperatives promise to revolutionize online access to historical sources.”

You must have been invited to submit a Final Proposal. This program has two deadline options.​ 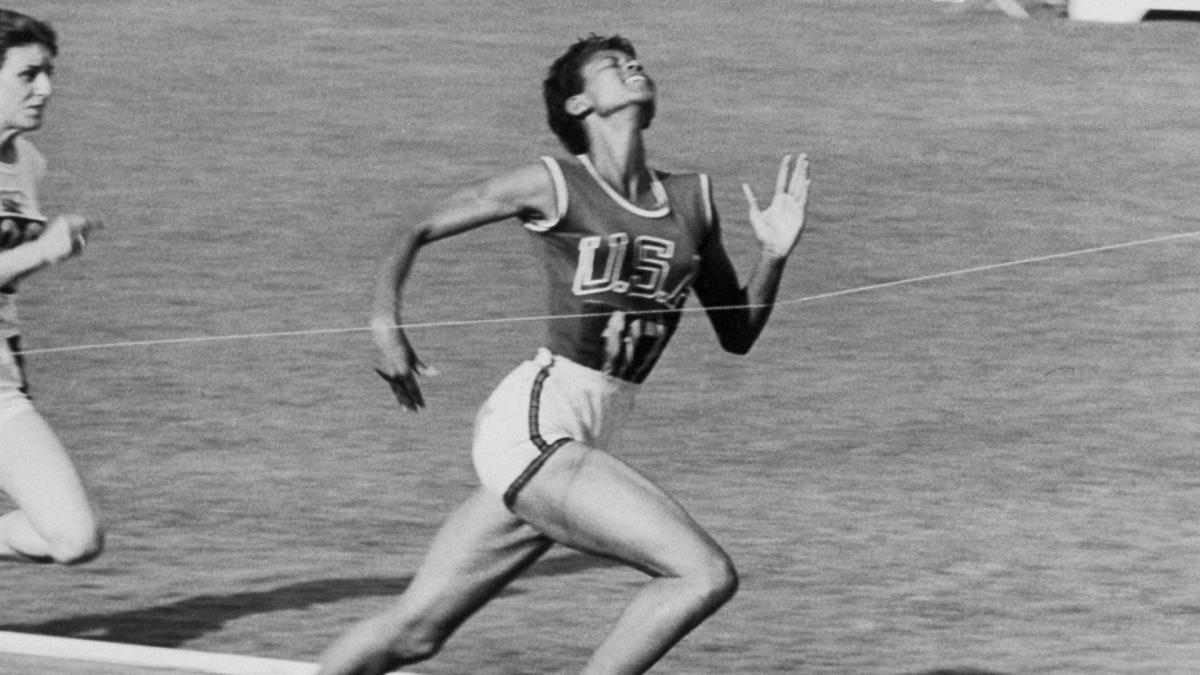 Wilma Rudolph crossing the finish line at the 1960 Olympic Games.

As a child, Wilma Rudolph (1940-1994) suffered through several childhood illnesses, including scarlet fever, and at the age of five, she contracted infantile paralysis, caused by the poliovirus. Though she recovered from polio, Wilma wore a leg brace until the age of 12.

By high school, however, she had blossomed into an athlete, turning to track and field. Known for her speed, she was the youngest member of the U.S. team at the 1956 Olympics in Australia, winning a bronze medal. In 1960, at the Rome Olympic Games, she won three gold medals. The Associated Press Female Athlete of the Year Award in both 1960 and 1961, and after retiring, she went on to teach, coach and run a community center.

You can hear her remarkable life story through the archives at Washington University in St. Louis and the complete "Black Champions" interviews, made accessible through a grant from the NHPRC.

Thirty-two prominent sports figures, including Curt Flood, Arthur Ashe, Kareem Abdul-Jabbar, Evelyn Ashford, and Floyd Patterson. They provide an in-depth oral history of African American life as it relates to sports and civil rights from the early 1900s to the 1980s. Unrestricted access to this collection of never-before-seen interviews can now provide a substantial research and teaching resource for scholars and students investigating civil rights history and the role of athletics in U.S. culture. One of the most distinctive aspects of the Black Champions interviews is the strong presence of African American female athletes from the mid-20th Century. Women sports pioneers interviewed include track gold medalist Alice Coachman-Davis and tennis champion Althea Gibson The contributions of black female athletes often is overlooked in sports histories, and filmed interviews with such women are not nearly as common as those with their male counterparts.

Go to http://repository.wustl.edu/spotlight/black-champions for the full interviews with these remarkable athletes. 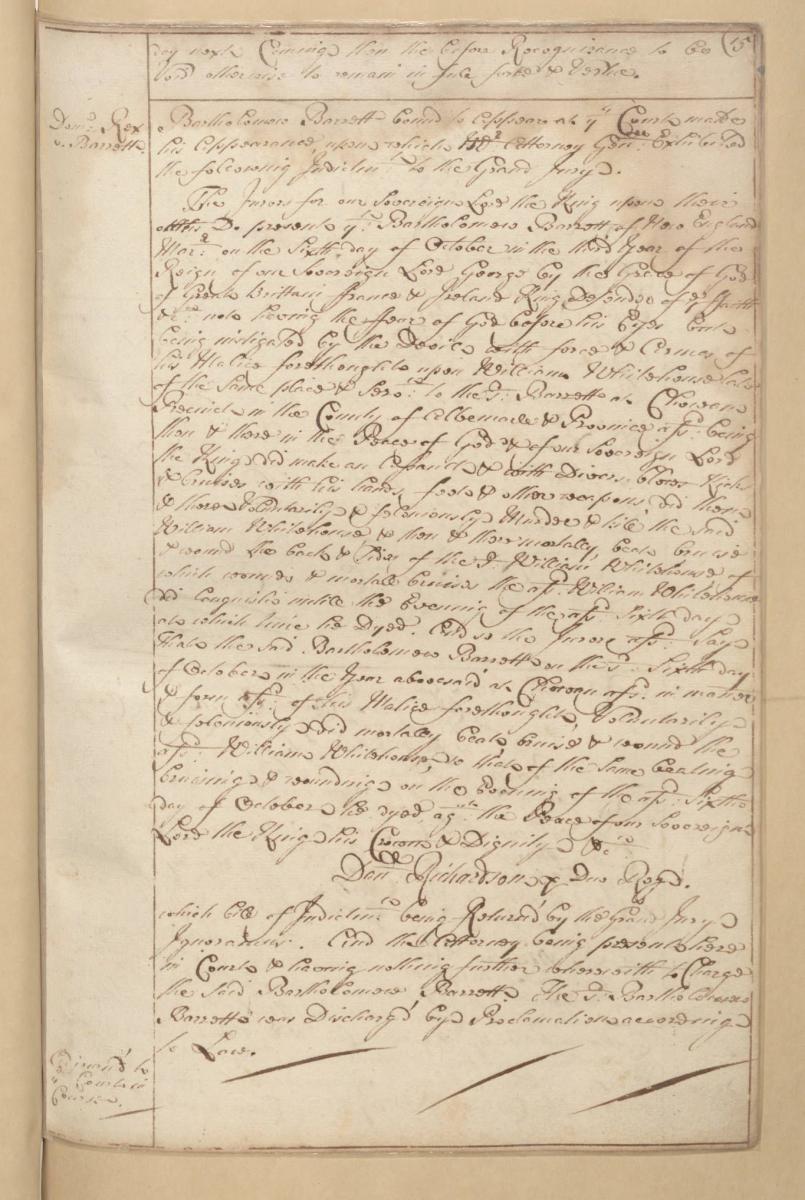 What you have here is a page from the General Court minutes for men accused of storing Blackbeard's booty, held by the State Archives of North Carolina. Here's the description from Digital North Carolina:

"Edward Thatch (Blackbeard) headquartered at Bath and befriended Gov. Charles Eden and his secretary, Tobias Knight. Some of Blackbeard’s booty was stored with Knight, and two prominent North Carolinians (Edward Moseley and Maurice Moore) found the evidence. Governor Eden had them arrested and tried for ’stirring up sedition.’’ As part of the testimony for the defendants, there was a complaint that the governor 'could not... raise [armed men] to destroy Thack (one Edwd Thacke formerly a pirate) but instead of that he (the sd Thacke) was Suffered to go on in his vilainies.'”

"I wish you would keep a diary under the following heads or columns. 1. day of the month. 2. thermometer at sunrise. 3. barometer at sunrise. 4. direction of wind at sunrise. 5. the weather viz. rain, snow, fair at sunrise, &c. 6. thermom. at 4 pm. 7. barometer at 4. pm. 8. direction of wind at 4 pm. 9. weather at 4 pm. 10. shooting or falling of the leaves of trees, of flours, and other remarkable plants. 11. appearance or disappearance of birds, their emigrations &c. 12. Miscellanea. It will be an amusement to you and may become useful. I do not know whether you have a thermometer or barometer. If you have not, those columns will be unfilled till you can supply yourself. In the miscellaneous column I have generally inserted Aurora boreales, and other unclassed rare things." -- Thomas Jefferson to James Madison, March 16, 1784 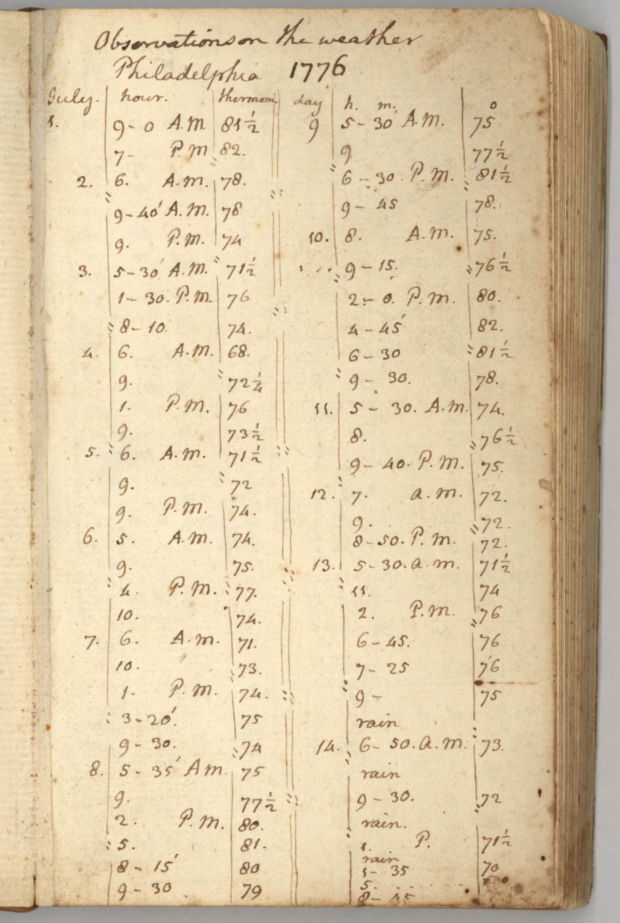 A page from Jefferson's weather observations.

Thomas Jefferson was fascinated by the weather and from 1776, he kept a record of his weather observations, in America, in Europe, and even in the mid-Atlantic. His practices and those of National Weather Service observers today are basically the same: to measure precipitation and to record the daily temperature range. Our friends at Monticello have prepared a detailed article on Jefferson's Weather Observations at https://www.monticello.org/…/research-…/weather-observations, including this digitized Weather Memorandum Book, 1 July 1776, Philadelphia. Original manuscript from the Coolidge Collection of Thomas Jefferson Manuscripts. Massachusetts Historical Society.

Now, with support of an NHPRC grant, Princeton University is working in collaboration with the University of Virginia's Center for Digital Editing, create and launch a freely-accessible online edition of Jefferson’s Meteorological Records.

The edition would make available all of the extant meteorological observations, which Jefferson maintained on a daily basis—hence provided meteorological data for multiple localities over time. The available records span the years 1776 – 1826 (with some known gaps), including some 13,000 temperature observations, thousands of barometric pressure readings, and hygrometer readings; notations of wind and general weather and sky conditions; and other notes “such as the dates on which certain birds and animals appeared in the spring, occurrences of frost and snow, and when some plants and trees leafed out or bloomed.” The existence of such a base of meteorological data is exceedingly rare for the pre-1850 period. 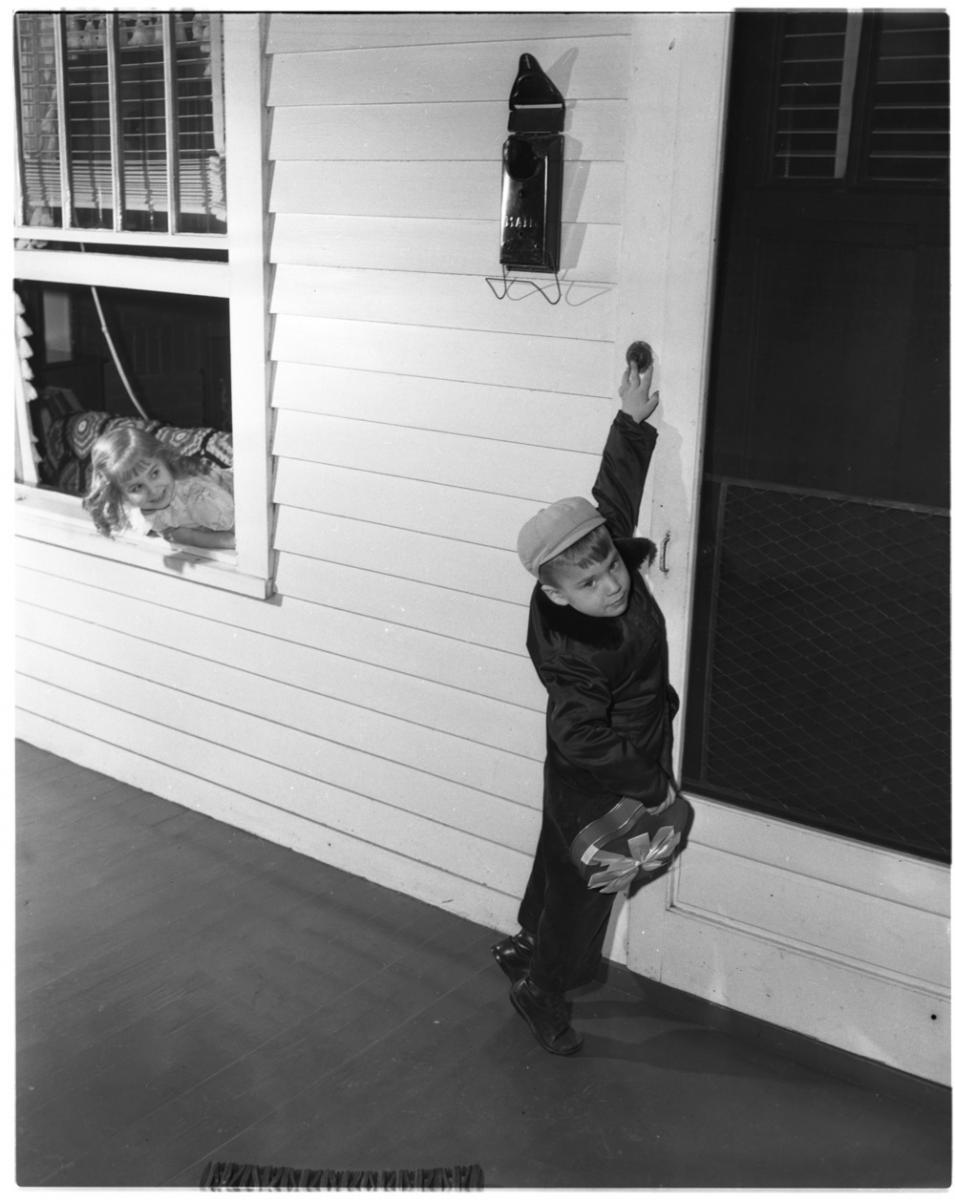 Here from Valentine’s Day in 1950 is Jackie Thompson peeking at Johnnie Gorman delivering valentine to her house. This charming image is from the John C. Wyatt Lexington Herald-Leader photographs (LHL) collection that consists of an estimated 2 million unique photographic negatives spanning the years 1939-2001. The collection also contains associated newspaper clippings, job sheets, and hand-written photographers' notes. The LHL photographs are an unparalleled source of photographic evidence of the many historical, cultural, and industrial changes that have shaped Lexington and its surrounding region. The scope of the collection highlights the day to day activities of Kentuckians. It follows the changing urban landscape of Lexington, the agricultural, tobacco and horse racing industries, key national events such as World War II and Vietnam, as well as notable regional and national figures. It is the most extensive, single collection of still photographic images documenting Lexington's 20th Century history in existence.

An NHPRC grant to the University of Kentucky enabled archivists there to transform this large newspaper negative collection from an unprocessed and only marginally accessible state, to a well-documented archival collection with a searchable database. Now the collection is going online, with the first 13,000+ items available at https://lhlphotoarchive.org/