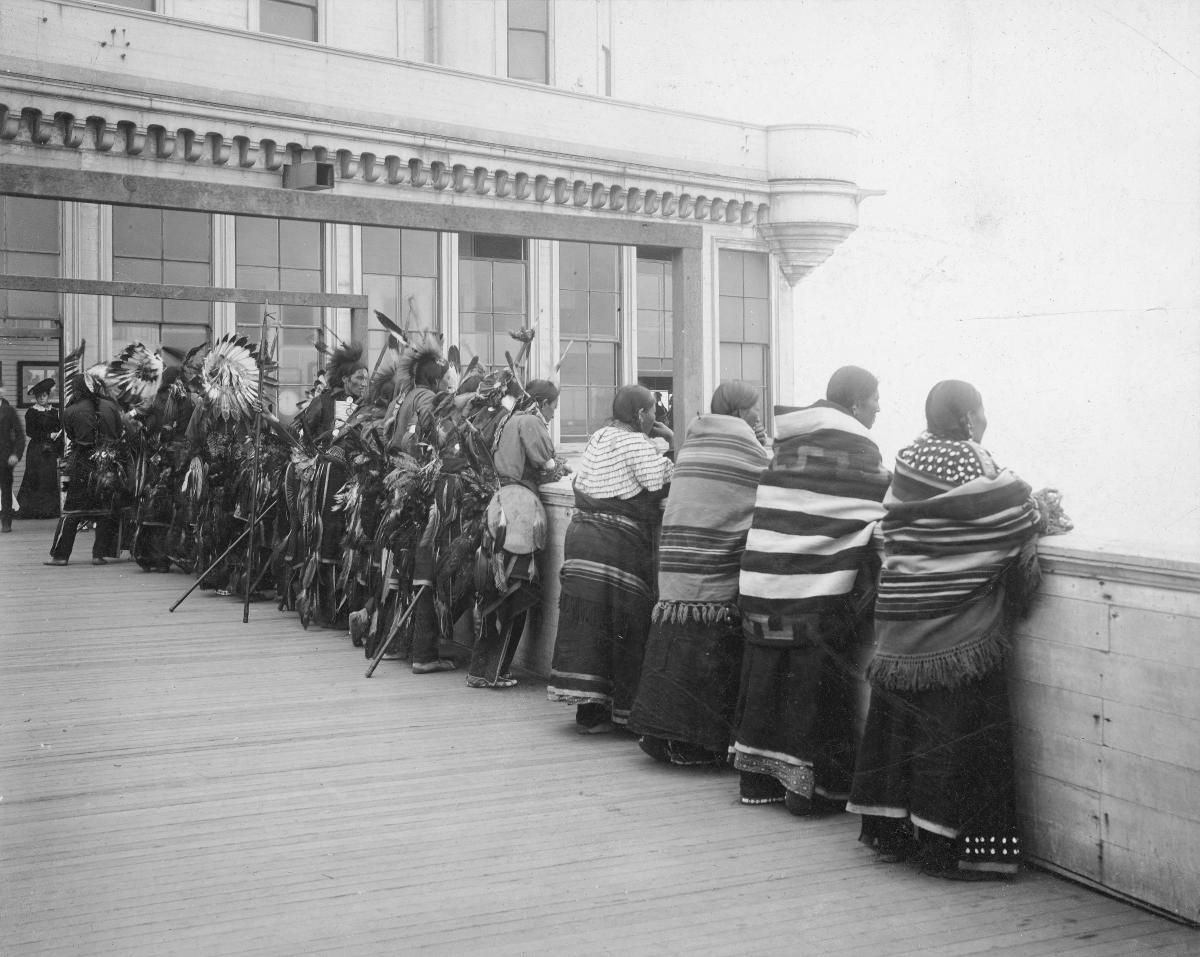 Archivist of the United States David S. Ferriero will award 36 grants totaling $2,975,339 for historical records projects in 27 states and the District of Columbia, pending appropriations of a final budget for FY 2022 (complete list online).  The National Archives grants program is carried out through the National Historical Publications and Records Commission (NHPRC). 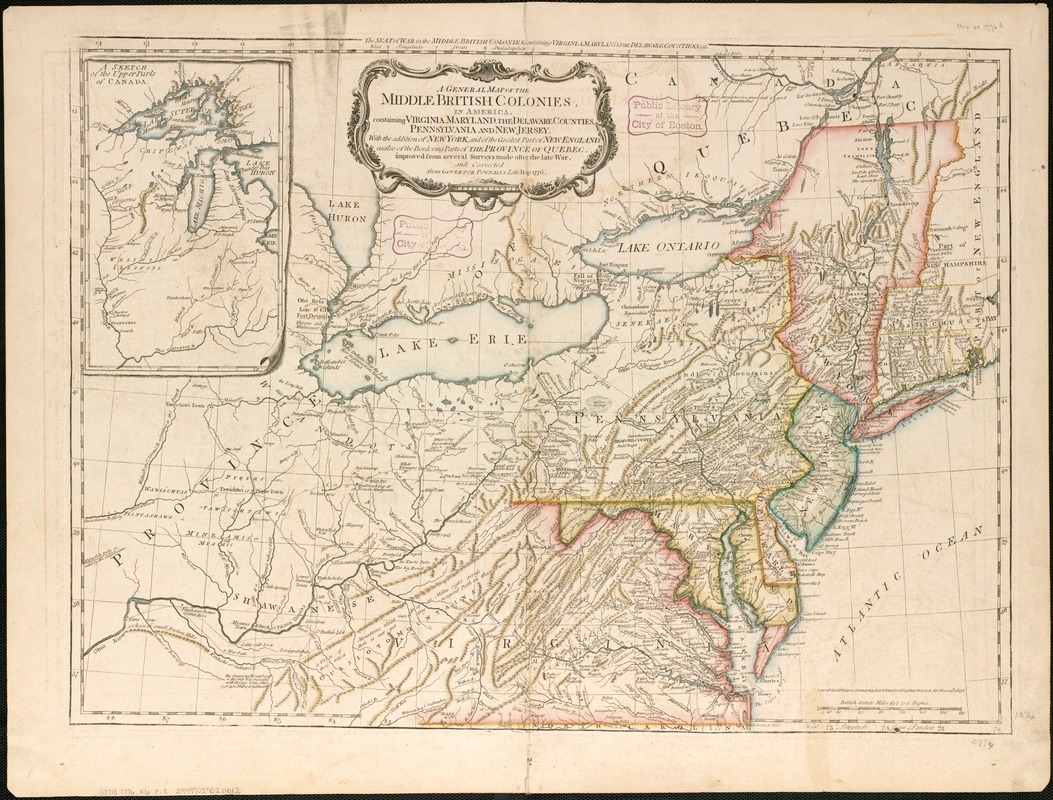 Partnership between the Leventhal Map & Education Center at Boston Public Library and the Smith Library for the Study of George Washington at Mount Vernon.

Major Initiatives program to improve public discovery and use of major collections:

The NHPRC also approved six projects, with $717,766 in funding from the Mellon Foundation, for Planning Grants for Collaborative Digital Editions in African American, Asian American, Hispanic American, and Native American History. “Thanks to our continued partnership with The Mellon Foundation, we will be able to share and amplify the voices of previously marginalized groups,” said Archivist of the United States David S. Ferriero. “These are important voices in American history and deserve to be heard. This has been an extraordinary time of dialogue and debate on the complicated issues of representation, opportunity, race, and rights. While there have been historic strides on many fronts, projects like this NHPRC/Mellon grant program will help as we continue to strive for a more perfect union." 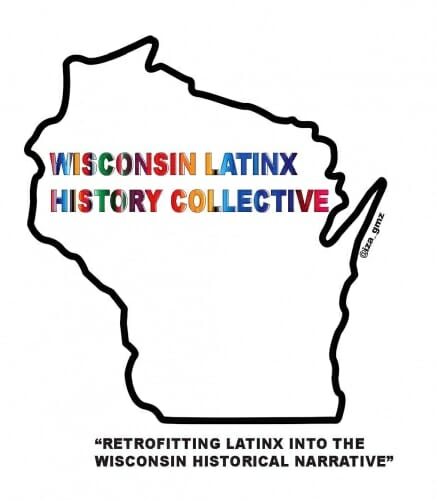 The first grants will go to:

The goals of this new program are:

Janice Ruth Named to the Commission

Joining the National Historical Publications and Records Commission as representative from the Library of Congress is Janice E. Ruth, chief of the Library’s Manuscript Division. Co-curator of the Library’s exhibition Shall Not Be Denied: Women Fight for the Vote, Ms. Ruth was a contributing author to the exhibition’s companion book and one of the authors of American Women: A Library of Congress Guide for the Study of Women’s History and Culture in the United States (2001), Women Who Dare: Women of the Suffrage Movement (2006), and several Library of Congress Web sites relating to women’s history.  She is a Fellow of the Society of American Archivists and served on the SAA committees that developed the Encoded Archival Description (EAD) standard for electronic finding aids and authored the first EAD Tag Library and EAD Application Guidelines. She holds an M.L.S. and an M.A. in American history from the University of Maryland.

Can You Tell Me How to Get… 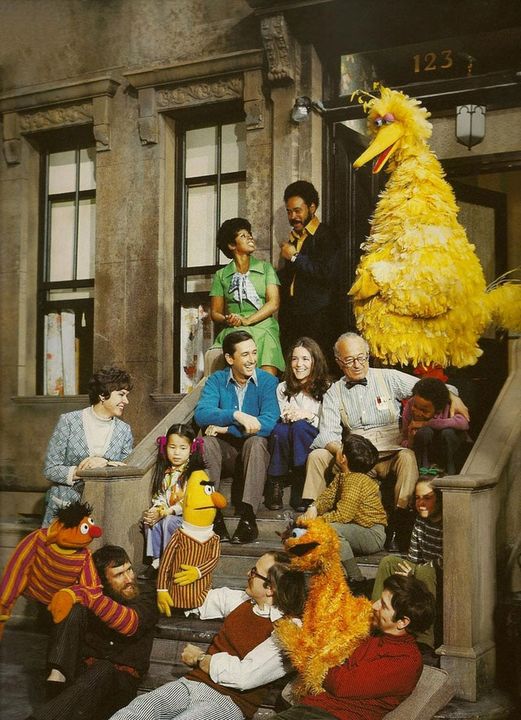 A Major Initiatives grant helped bring together the University of Georgia and the American Archive of Public Broadcasting to process the Peabody Awards entries, 1941-1999.

If you are a certain age (like us!), you may well remember the first episode of "Sesame Street," which premiered in 1969. This behind-the-scenes photo is from the first season (you can tell because Oscar, the Grouch is still orange, and not the familiar green from the second season on).

In the first episode, Gordon introduces Sally, who has just moved to Sesame Street, to her new neighbors. Susan and Sally watch a film about a dairy farm and learn where milk comes from. Puppets Bert and Ernie introduce a lesson about washing. Sally also meets Big Bird, Kermit and Oscar the Grouch. Live, puppet, and animated sequences teach about the numbers 2 and 3 and the letters E, S and W. A clip of children playing follow-the-leader teaches the concepts of going over, under, and around. One of our favorite sequences has Gordon putting together some puppets who then sing "Consider Yourself" (from the 1968 film musical "Oliver!").

"Sesame Street" was launched as an experiment to determine whether the techniques proven successful in commercial television can be used effectively in teaching preschool children. Its producers won a 1969 Peabody Award.

The program was made accessible for online viewing through an Major Initiatives grant to the University of Georgia to support a partnership with the American Archive of Public Broadcasting to digitize and make available online 3,477 (approximately 4,000 hours) of public radio and television programs (1941-1999) submitted for Peabody Awards by 230 stations across the country. The Peabody Awards honor the most powerful and enlightening stories in television, radio, and online. Archivists at the University of Georgia’s Brown Media Archives also collaborated with the American Archive of Public Broadcasting Library, which is a partnership of the Library of Congress and WGBH Education Foundation. Documenting local, state, and national history, the collection ranges from children’s programming to documentary to news series.

To find out more about, see our a Major Collaborative Archival Initiative grant announcement.

Time to finish up your shopping. How about a good game?

"(A good game) should be easy to learn yet have infinite strategic possibilities, give you the chance to make choices, create interaction among players and take a maximum of one and a half hours to play." -- Sid Sackson

Sid would know. Over the course of his career, he created more than 500 games; about 50 were marketed. Among his most notable were Acquire, Can’t Stop, Sleuth, Focus (Domination), Bazaar, Metropolis, Monad, Take Five, and Venture. Over the course of his career, Sid and his wife Bernice collected over 15,000 games eventually filling three rooms and the basement of his house, with games stacked from floor to ceiling. 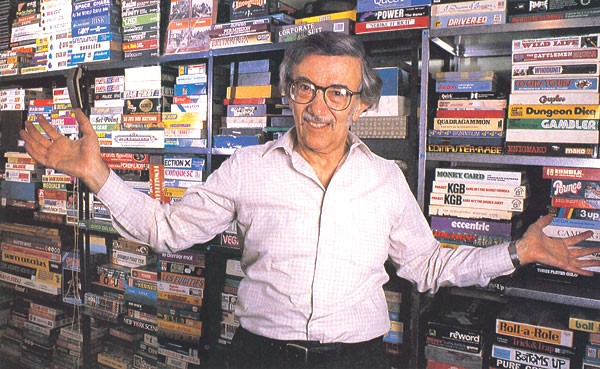 Courtesy The Strong Museum of Play

The Sid Sackson collection, held in the Brian Sutton-Smith Library & Archives of Play at The Strong, is a compilation of diaries, correspondence, notes, game descriptions, and publications created or used by Sackson during his lengthy career in the toy and game industry. Sackson meticulously documented his daily activities related to game design, development, and collecting in his diaries; he recorded details about the games he played and designed, people with whom he spoke or corresponded in the game industry, and the articles and books he read. Sackson also indexed many of the diaries, creating a high level of access rarely found in personal papers. These handwritten diaries represent a comprehensive picture of the American board game industry in the latter half of the 20th century.

With support from the NHPRC, the Sid Sackson Portal at The Strong National Museum of Play, allows game enthusiasts and researchers alike to dive into 35 years of diaries created by legendary game designer Sid Sackson. Have some fun at Sid Sackson Portal. 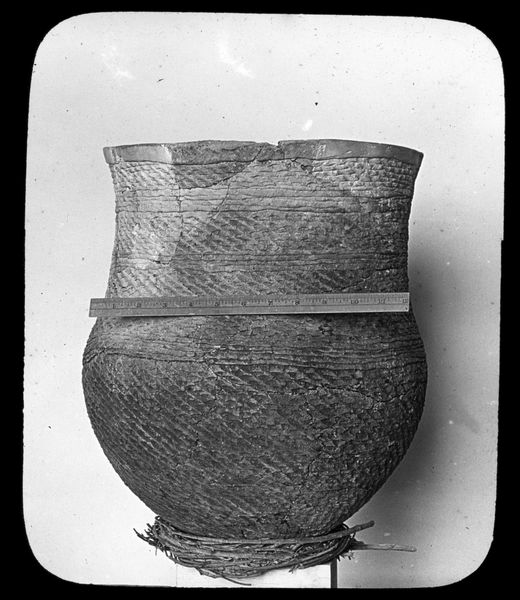 This photograph of a beautiful coiled ware olla is from the Earl Morris Papers at the University of Colorado Museum of Natural History.

Earl Halstead Morris, 1889-1956, was an American archaeologist active in Mesoamerica and the United States southwest, Morris led excavations in the field from 1916-1940 for the University of Colorado (CU), American Museum of Natural History (AMNH), the Carnegie Institution of Washington, and the School of American Archaeology (SAA). These excavations lead to the production of 69 publications in the period of 1911-1956 and to the accumulation of extensive museum collections of pottery, stone implements, baskets, sandals, and human remains at the institutions for which he worked. Morris corresponded and collaborated with influential archaeologists across the country.

The Earl H. Morris personal papers at the University of Colorado Museum of Natural History consist of materials created by Earl Morris and his associates in the course of his work as an archaeologist in the southwestern United States and Mesoamerica. The collection is a record of archaeological field methods in first half of the 20th century as well as the growth of southwest archaeology as an academic discipline. 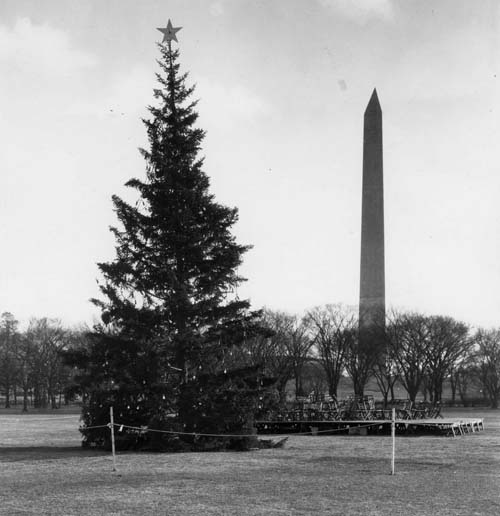 We would be remiss without wishing you Happy Holidays from Washington, DC. 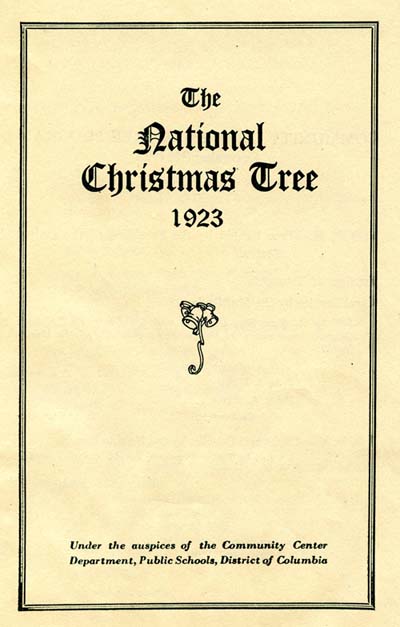 Grown in Vermont, the first National Community Christmas Tree was presented to President Calvin Coolidge by Middlebury College President Dr. Paul D. Moody in 1923. The tree traveled from Coolidge’s home state via a special train car to Washington, D.C. The tree was erected on the Ellipse south of the White House grounds, where a crowd of 3,000 watched the President and Mrs. Coolidge at the lighting on Christmas Eve.

A grant from the NHPRC to the Forest History Society’s Archives helped process a collection documenting the first three decades of the lighting ceremony. The National Community Christmas Tree Records includes programs, photographs, correspondence, guest lists, invitations, news clippings, and more related to the planning of the event between 1923 and 1954. You can read more about it at https://foresthistory.org/looking-back-at-the-national-christmas-tree-tradition/

This does our heart good. There is perhaps no more poignant project the NHPRC supports than the "Last Seen: Finding Families After Slavery." 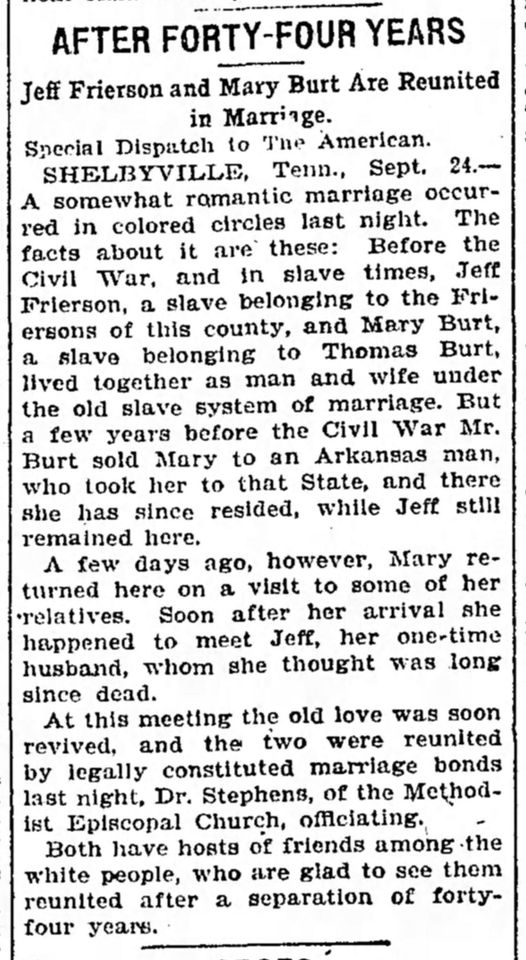 For decades after emancipation, formerly enslaved people and their relatives placed advertisements in newspapers hoping to reconnect with family and loved ones for decades following emancipation. The ads serve as testaments to their enduring hope and determination to regain what was taken from them. Sometimes the stories had a happy ending.

Last Seen: Finding Family After Slavery aims to identify, digitize, transcribe, and publish ads placed in newspapers across the United States (and beyond) by formerly enslaved people searching for family members and loved ones after emancipation. These newspaper ads began appearing in the 1830s (their earliest ad appeared in The Liberator in 1832) and greatly increased in frequency in the years immediately following the Civil War and continued well into the 20th century.

These ads not only document the extensive separation of Black families through the domestic slave trade but also attest to the persistent efforts thousands of people made to reunite with those from whom they had been separated. In the ads, mothers search for children separated through sale, daughters and sons seek parents, men and women inquire about partners and spouses, and siblings search for one another—they include names, describe events, and recall last seen locations. All this information, crucial to genealogists and scholars alike, is published in this open-access collection.

Launched in 2017, Last Seen now includes over 3,500 ads spanning eight decades from 275 newspapers. In addition to publishing these ads, making them available to genealogists and researchers alike, Last Seen includes lesson plans and resources for teachers to use in their classrooms (at all grade levels) to help teach the hard history of slavery.