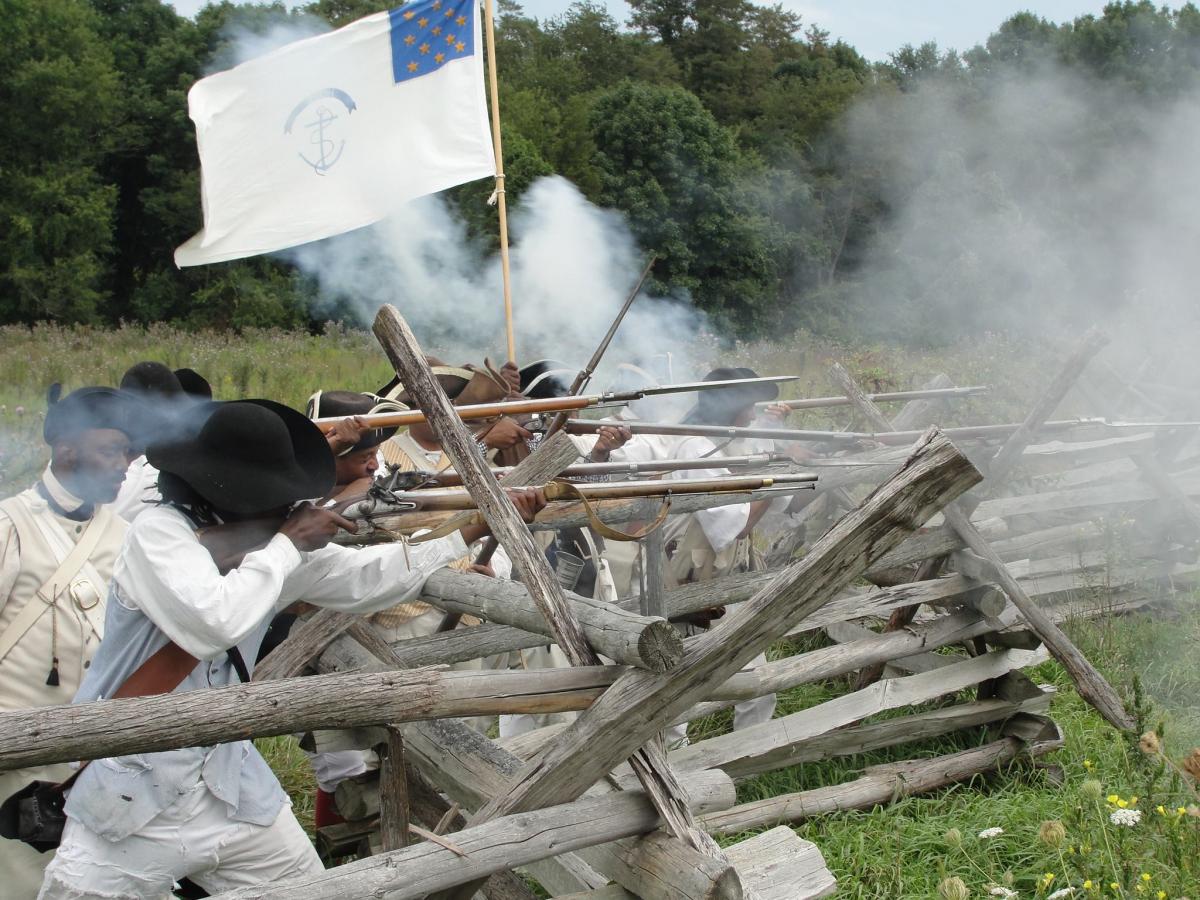 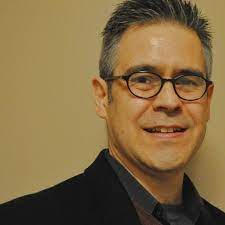 Darrell Meadows was named Acting Deputy Executive Director in August, 2021. He replaces retired staff member Lucy Barber. Dr. Meadows joined the NHPRC as Director for the Publishing Program in December, 2014. He had previously been with the Kentucky Historical Society, where he started the online publication, the Civil War Governors of Kentucky Digital Edition. Prior to his work at the Society, he was research consultant for the National Science Foundation and served as historian for an international collaborative digital library at the Library of Congress. Dr. Meadows holds a Ph.D. in history from Carnegie Mellon University. 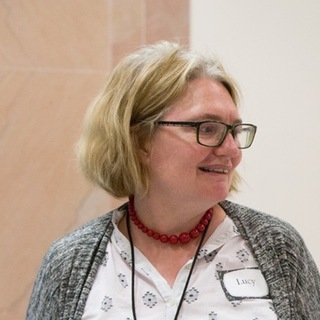 Dr. Lucy Barber joined the NHPRC in 2006 as Director for Technology Initiatives and was named Deputy Executive Director in 2008. A graduate of  Haverford College with a Ph.D. in history from Brown University, Dr. Barber served the agency with distinction for 15 years.

Commission to Meet on November 16

The National Historical Publications and Records Commission will meet on Tuesday, November 16, 2021 via teleconference to consider grant applications and review policy.  The public is welcome to send written comments to be shared with the Commission members by email to nhprc@nara.gov by November 10, 2020.

Strike up the band!

This past summer Recollections Wisconsin facilitated four Digital Readiness Fairs where local history practitioners and invited guest experts shared their experiences working with digital projects including their challenges and successes, “best practices” and a few lessons learned along the way. Content from all four Digital Readiness Fairs is accessible at https://recollectionwisconsin.org/cop/digital-readiness-fairs

Their fifth and final event will be held in conjunction with the 15th annual Wisconsin Local History and Historic Preservation Conference. This virtual event on October 20-22 features workshops and presentations from local history practitioners across the state and beyond. Find out more at https://www.wisconsinhistory.org/Records/Article/CS3325

One of the fun aspects of Benjamin Franklin's Poor Richard's Almanac were his explanations of astrology. In this image, Franklin points to the ruling constellations and their influence on anatomy.

In the 1754 edition, he explains the connection between the astrology signs and the seasons of the year. As we turn the page to Autumn, let us salute Franklin's easy wisdom:

"Thus, as the Year of the Ancients began most naturally with the Spring, Aries and Taurus, that is, the Ram and the Bull, represented the successive Addition to their Flocks of Sheep and Kine, by their Produce in that Season, Lambs and Calves. Gemini were originally the Kids, but called the Twins, as Goats more commonly bring forth two than one: These follow’d the Calves. Cancer, the Crab, came next, when that Kind of Fish were in Season. Then follow’d Leo, the Lion, and Virgo, the Wench, to mark the Summer Months, and Dog-days, when those Creatures were most mischievous. In Autumn comes first Libra, the Ballance, to point out the Time for weighing and selling the Summer’s Produce; or rather, a Time of Leisure for holding Courts of Justice in which they might plague themselves and Neighbours; I know some suppose this Sign to signify the equal Poise, at that Time, of Day and Night; but the other Signification is the truer, as plainly appears by the following Sign Scorpio, or the Scorpion, with the Sting in his Tail, which certainly denotes the Paying of Costs. Then follows Sagittary, the Archer, to show the Season of Hunting; for now the Leaves being off the Trees and Bushes, the Game might be more easily seen and struck with their Arrows. The Goat accompanies the short Days and long Nights of Winter, to shew the Season of Mirth, Feasting and Jollity; for what can Capricorn mean, but Dancing or Cutting of Capers? At length comes Aquarius, or the Water-bearer, to show the Season of Snows, Rains and Floods; and lastly Pisces, or the two Shads, to denote the approaching Return of those Fish up the Rivers: Make your Wears, hawl your Seins; Catch ’em and pickle ’em, my Friends; they are excellent Relishers of old Cyder. But if you can’t get Shad, Mackrell may do better."

You can read more colonial astrology on the NHPRC-supported Founders Online at: https://founders.archives.gov/docume…/Franklin/01-05-02-0051

Between 1912 and 1929, more than 11,000 silent films were made in the United States. Cinemas regularly used live music designed to amplify emotions in those flicks. Until the 1930s, the industry employed more than half of the professional musicians in the United States and provided professional opportunities to women composers and Black composers that the nation’s concert halls and opera houses did not. 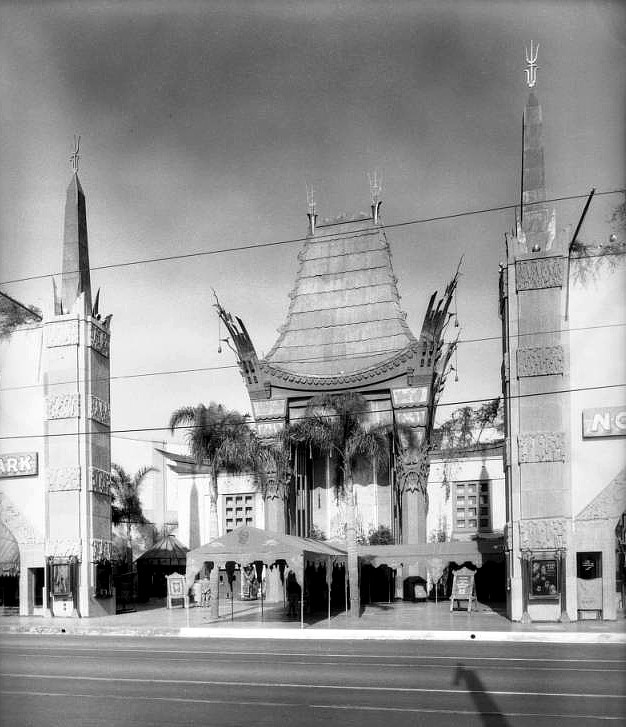 Los Angeles began asserting itself as the center of filmmaking in the United States, and Sid Grauman built three “movie palaces” in the City of Angels: Grauman’s Million Dollar Theatre, the Chinese Theatre, and the Egyptian Theatre.

At the American Music Research Center at the University of Colorado, the Grauman’s Theatres Silent Film Scores Collection (120 linear feet) contains 3,854 pieces of music used by those musicians. AMRC acquired the collection in 2019, and an item-level finding aid is available. The collection includes complete sets of photoplay music and performance parts for full orchestra with performers’ and theater managers’ markings and indicia that provide further information about the way this body of music was used. Silent film scores were not unchanging works, and the Grauman’s Theatres scores collection contains individual works and parts of larger compositions that were combined and arranged to accompany films screened at Grauman’s picture palaces. Scattered among the commercially published works, there are 175 “manuscript” orchestrations that appear to have been created in-house for the theater’s orchestra.

An NHPRC grant to the University of Colorado will support a project to digitize approximately 192,700 pages of the silent film scores from Grauman’s Theatres. You can read more about it at https://www.colorado.edu/coloradan/…/10/01/sound-silent-film 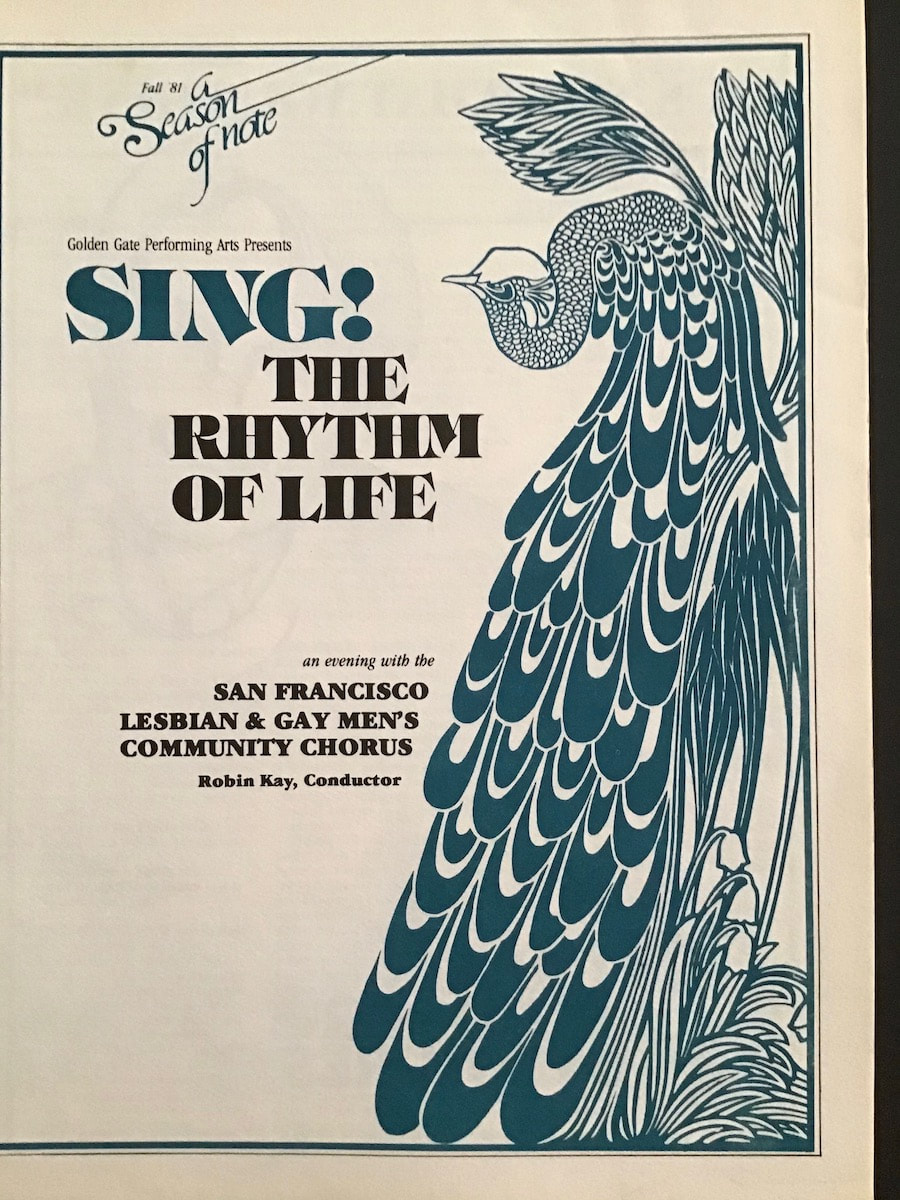 An NHPRC grant to the GLBT Historical Society in San Francisco is supporting "Sing Out: Processing and Digitizing LGBTQ+ Music and Theater Collections," a project to process 10 archival collections, totaling 124.25 linear feet, which include correspondence, ephemera,costumes, audiovisual material, and photographs, spanning over 70 years documenting the contributions of LGBTQ+ people to history, art, and culture.

Among the collections are the San Francisco Gay Men's Chorus Records (45 linear feet, 1978-2014): The chorus was founded by gay-music pioneer Jon Reed Sims (1947-1984). It is the world's first openly gay-identified choral organization and is the world's largest. The chorus is widely known affectionately as the “grandfather” of the LGBT choral movement. This collection documents the history and influence of the chorus and its impact on the lives of members, audiences, and LGBT people around the world. The collection is arranged by topic, including administrative records; Board of Directors materials; correspondence; financial records; donations and grants; awards; media coverage; member information; publicity materials; recordings; materials related to concert production, such as guest stars, concert themes, programs, and posters; information on the genesis and impact of the landmark 1981 National Tour and formation of the Gay and Lesbian Association of Choruses; materials related to the effects of and response to AIDS, including fundraising, memorial services, and obituaries; commissioned works; photographs; and chorus and audience surveys.

Known as the "Black Regiment" because of a large number of African American soldiers in its ranks, the 1st Rhode Island Regiment served with distinction in the Continental Army during the American Revolutionary War (1775–83), one of the few units to serve through the entire war. 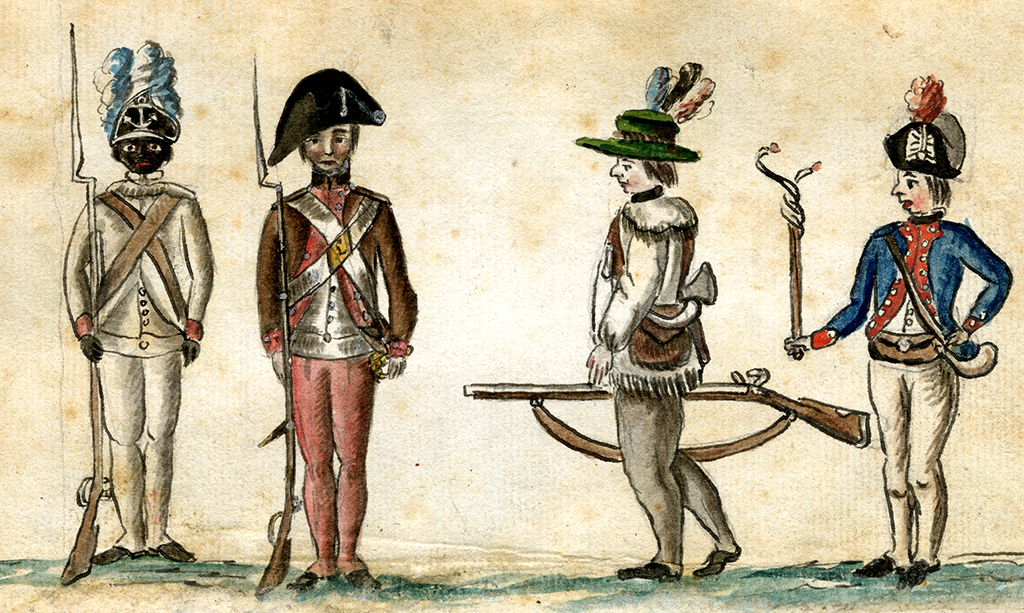 An NHPRC grant to the Rhode Island Historical Society will support "Brave, Enterprising Spirits: Documenting Rhode Island Soldiers in the American Revolution," which will digitize and make available approximately 6,400 pages of Revolutionary War regimental and Providence Hospital records from 1775 to 1783.

You can see the Rhode Island Historical Society's manuscript collections at https://www.rihs.org/catalog/manuscript-archives/

The Haunting of Hull House

Our friends at the Jane Addams Papers tell a tale best heard in October and Halloween. 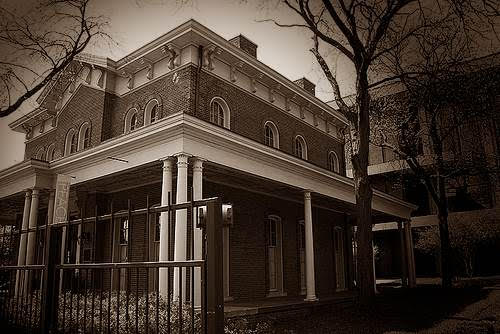 Hull House was built by Charles Hull in 1856 in a fashionable area of Chicago. After the Great Fire of 1871, the wealthy of the area moved to other areas, leaving the West Side to the poorest of the poor, and Hull House served as a store room and offices for a factory. Social reformers Jane Addams and Elizabeth Gates Starr came upon it whilst searching for a suitable home for their settlement house to serve the poor. They arranged to rent the house, only to later discover that it was haunted by Charles Hull’s late wife.

Jane Addams slept originally in the room in which Mrs. Hull had died, and while she determined that the ghost meant no harm, such cold logic was not enough to convince her to stay in the room. Some of the unfortunate guests who later spent the night in the spare room claimed they saw Mrs. Hull’s spirit. Today, the house is included on Ghost Tours in Chicago and has a reputation as one of the most haunted places in Chicago.

In 1913 another supernatural phenomenon visited Hull House. One day that year, three Italian women showed up at the door demanding to be shown the Devil Baby that was being raised in the attic. “No amount of denial convinced them he was not there,” Addams wrote, “for they knew exactly what he as like, with his cloven hoofs, his pointed ears and diminutive tail; moveover, the Devil Baby had been able to speak as soon as he was born and was most shockingly profane.”

Over the next several weeks, streams of visitors poured in day and night, demanding to be shown the Devil Baby. While a few versions of the origin story arose, in the Italian version, the child was the result of a pious mother married to an atheist, who said he “would quite as soon have a devil in the house” as a holy picture. According to the story, “As soon as he was born, the Devil Baby  ran about the table shaking his finger in deep reproach to the father.” The baby is caught and taken to Hull House, where the residents “wishing to save his soul, took him to church for baptism, [where]...the Devil Baby, falling from the holy water, ran lightly over the backs of the pews.”

Though Jane Addams continually denied the existence of such a disfigured child hidden away in the attic, the legend persisted and even grew before it eventually died down, though it never vanished completely.  In a 1916 piece for The Atlantic, Addams explored not only the legend of the demon child, but why that story held the minds of the poor women that she served. The Devil Baby became a kind of proxy for their own bewildered suffering at the hands of their spouses and children, a manifestation of the mysterious sorrows life visits upon the unfortunate. 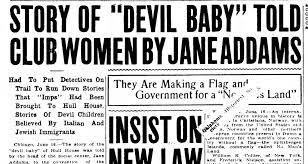 “...[D]uring the weeks when the Devil  Baby seemed to occupy every room in Hull House, one was conscious that all human vicissitudes are in the end melted down into reminiscence, and that a metaphorical statement of those profound experiences which are implicit in human nature itself, however crude in form the story may be, has a singular power of healing the distracted spirit.” -- Jane Addams, The Atlantic, October 1916