What Are Some Important Characteristics of Audio Formats?

Magnetic audio tape consists of a base layer, a binding layer, and sometimes a back coat.

The base layer is either paper, PVC, acetate, or polyester. It functions as a substrate to support the recording as it travels through the playback equipment. Most are either acetate or polyester.

The binding layer supports the magnetic particles used for recording. Manufacturers experimented with various formulations of these binding elements and sometimes consider detailed information about the exact components to be trade secrets. Often it is the binder which breaks down or changes over time and causes a tape to degrade or become sticky and difficult to play (see Condition Assessment) for additional information.

The back coat layer, if present, is carbon based and is meant to reduce friction and static electricity.

The magnetic audio you may encounter will either be mono (single source of audio) or stereo (pairs of tracks).

Another important technical characteristic of magnetic audio is track layout. To achieve optimum sound reproduction upon playback, it is important to try to match the reproduce head on your playback deck to the recorded track layout of the tape (if this important step is omitted, you may run the risk of a tape transfer with poorer signal to noise ratios, thus achieving an overall poor master transfer). Potential track configurations include: full track, half track, quarter track, and four track for ¼-inch audio. 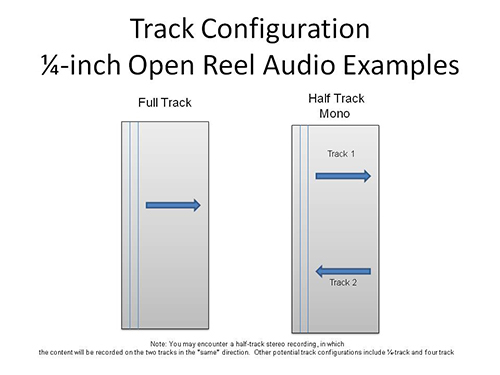 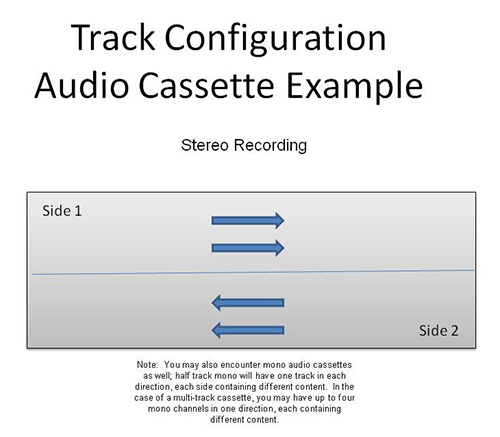 DAT has a base and magnetic layer and is primarily polyester based. DAT tapes have proven to be fairly unstable over time, exhibiting data dropouts and compatibility errors between machines. In addition, the format is deemed obsolete making it difficult to find support and parts from manufacturers and service providers.

Grooved recordings consist of different chemical make-ups depending on when they were produced. Cellulous acetate and nitrate bases cause most preservation issues. When oxidation reacts with the acids (acetic or nitric), discs run the risk of becoming very brittle. In acetate discs, the loss of castor oil plasticizer over time causes shrinkage and in turn peeling of the coating. The lacquer coating may start to crack, bubble, or flake off the disk as well. This is known as delamination.

Discs that have glass substrates are extremely fragile and prone to breakage. Depending on the chemical makeup of the grooved recordings collections, there are many other factors you may encounter at home or in a professional environment.

The technical characteristics of an optical disc depend on whether it is pressed or burned. Pressed discs make use of pits and lands in order to store data so that the thin metal recording layer is physically altered by pressing in a manufacturing process. Burned (recordable CD-Rs, DVD-R) discs make use of an organic dye layer in order to record data and are typically less reliable because this dye is more susceptible to degradation over time. Recordable CDs and DVDs have proven to be fairly unstable over time, and are deemed a bad choice for long-term preservation.

There is a second distinction regarding optical discs and the technical characteristics of the data they contain: if the disc is used simply as a Data CD (without being formatted as a common audio CD-DA) then you may find any type of audio file is present. A small MP3 file to a larger uncompressed broadcast wave file may be stored on the disc. CDs usually allow for 700 megabytes of data which correlate to about 74-80 minutes of content. The only restriction with data DVDs is that the file(s) must be smaller than 4.7 gigabytes which is the storage limit for a typical DVD. If the disc has been burned and authored, then the files cannot be copied from the disc.