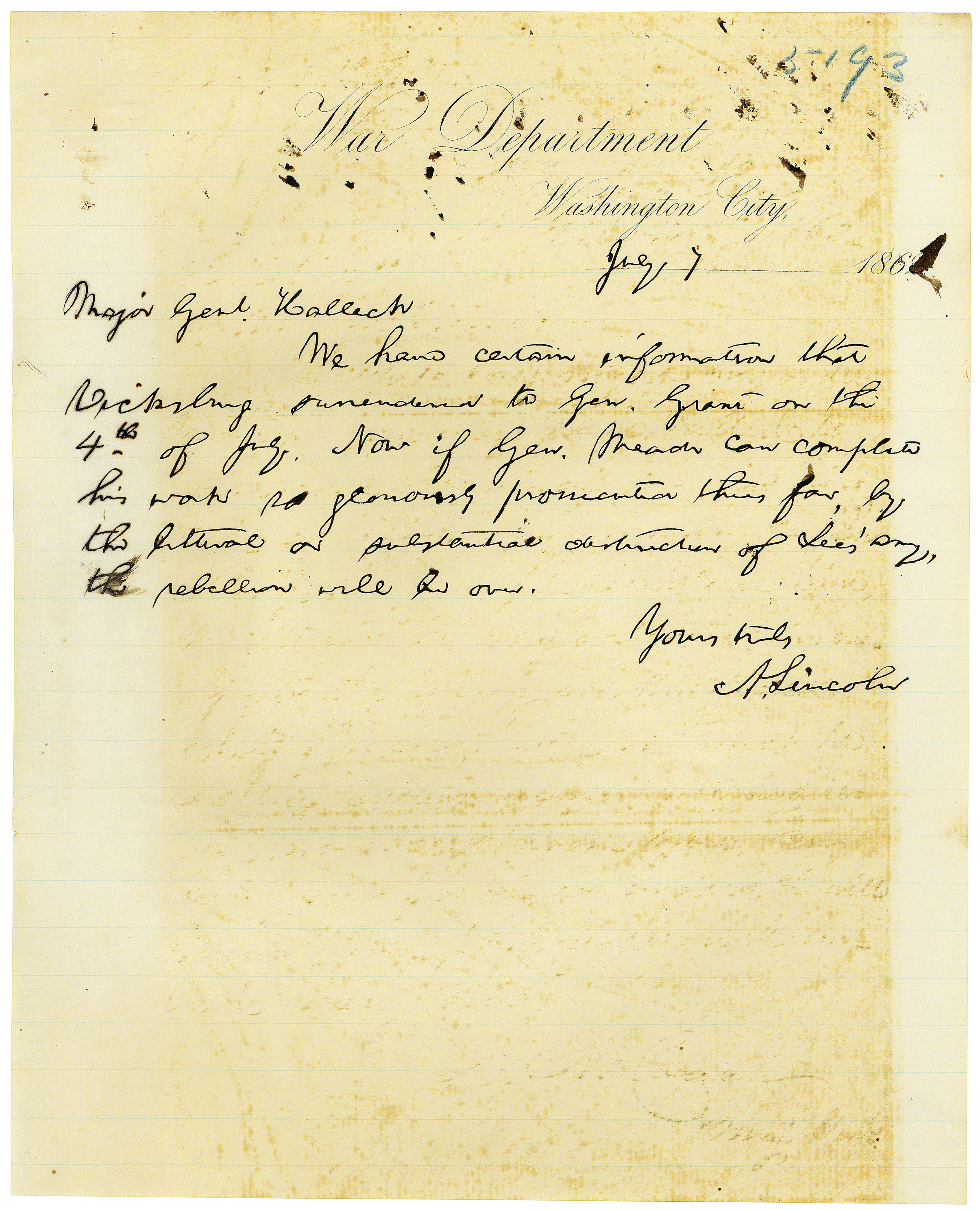 Washington, DC…Today, the National Archives announced the discovery of a new Abraham Lincoln message written in President Lincoln’s own hand to Major General Henry Halleck. The message, which was found among the Adjutant General’s Records in the stacks at the National Archives Building, is dated July 7, 1863. It is part of a collection of “Generals’ Papers” which includes miscellaneous documents relating to Halleck.

After General Halleck received the note from the President, he quoted the information verbatim in a telegram to General Meade on the same day. The telegram, but not the note, was first published in 1889 as part of The War of the Rebellion: A Compilation of the Official Records of the Union and Confederate Armies. Subsequent histories and collections have cited the telegram, but President Lincoln’s original note itself remained elusive and has never been cited by historians. At the press conference, the original note was shown for the first time.

Archivist of the United States Allen Weinstein hailed this discovery as a "significant find." He added that "it shows us that there are still exciting discoveries to be made at the National Archives. History is never a closed book. The document displayed today contributes to our understanding of some of the major figures of the Civil War."

Trevor Plante, a specialist in Civil War records at the National Archives, discovered the message in the National Archives files while looking for some materials in response to a reference request. In commenting on the discovery, Plante said that “this message was one of the missing pieces of the puzzle. Its discovery shows us the urgency and the importance that General Halleck attached to Lincoln’s note. More importantly, we are not left to rely on a telegram quoting Lincoln, we now have the original document. Halleck’s telegram to Meade, which we now know was sent the same day as Lincoln’s note, quotes the President’s message exactly.”

The note expresses Lincoln’s optimism that if General Meade could destroy Confederate General Lee’s army, the war would be over. For several days after Meade’s victory at Gettysburg, Pennsylvania, both Halleck and Lincoln implored Meade to fight Lee’s army before it crossed the Potomac River. The President feared that once Lee crossed the river Meade’s golden opportunity to strike the wounded army would be lost.

Lincoln’s message said:
Major Genl Halleck
We have certain information that Vicksburg surrendered to General Grant on the 4th of July. Now, if Gen. Meade can complete his work so gloriously prosecuted thus far, by the litteral(sic) or substantial destruction of Lee's army, the rebellion will be over.
Yours truly,
A. LINCOLN

Lincoln’s fears became reality on July 14 when Lee’s army escaped Meade’s clutches and crossed the Potomac at Williamsport, Maryland, into Virginia. Upon hearing the news a dispirited Lincoln sat down and wrote “… my dear general, I do not believe you appreciate the magnitude of the misfortune involved in Lee's escape. He was within your easy grasp, and to have closed upon him would, in connection with our other late successes, have ended the war. As it is, the war will be prolonged indefinitely…Your golden opportunity is gone, and I am distressed immeasureably(sic) because of it.” Lincoln did not send this message to Meade, instead the President wrote on the envelope “To Gen. Meade, never sent, or signed.” And so the Civil War raged on until the spring of 1865.

Among the vast holdings of the National Archives are millions of Civil War–related records, including battle reports, correspondence, telegrams, service records, pension files, maps, and photographs from the Union Army and also records from the Confederate government, which were captured by Federal forces or given to the War and Treasury Departments after the Civil War.

For more press information or to request an image of the document, contact the National Archives Public Affairs Staff at 202-357-5300.