The following is a document alert -- part of a program sponsored by the National Archives to notify the media of documents and images in the National Archives holdings that are relevant to national holidays, anniversaries or current events. This program, which is based on original records from the National Archives, its 13 Presidential libraries and 14 regional archives, is designed to offer the media an historical perspective on events that occur periodically and to highlight historical antecedents to current political or diplomatic initiatives.

On October 26, 1864, James W. Nye, Governor of the Territory of Nevada, began sending a telegram to President Abraham Lincoln. This message, transmitted in Morse code, contains the entire text of the Nevada State Constitution. Sending such a long telegram at the height of the Civil War was a challenge -- with no direct link from Carson City to Washington, DC, telegrapher James H. Guild worked seven hours to transmit the message to Salt Lake City, where it was resent to Chicago, then Philadelphia, and finally to the War Department’s telegraph Office in Washington, DC, two days later, where a 175-page transcription was made. The final page shows the total word count (16,543) and cost ($4313.27—or $59,229 in today’s dollars) of the transmission.

Frustrated that certified copies of the Nevada Constitution, sent earlier by overland mail and by sea, had failed to arrive in Washington, DC, by October 24, Governor Nye of the Nevada Territory ordered that the State Constitution be sent by wire. Three days after receiving this telegram—just eight days before the Presidential election—Lincoln proclaimed, in accordance with an Act of Congress, that Nevada was admitted into the Union, thus hoping to ensure his own re-election, as well as the election of like-minded Republicans in Congress.

This 175-page transcription of the longest telegram in the holdings of the National Archives is on display in an exhibition entitled BIG!, celebrating the 75th anniversary of the National Archives,” features big records, big events, and big ideas – and includes this 1864 telegram. The exhibition runs through January 3, 2010 in Washington, DC, before being prepared for national touring.

This page was last reviewed on March 18, 2019.
Contact us with questions or comments. 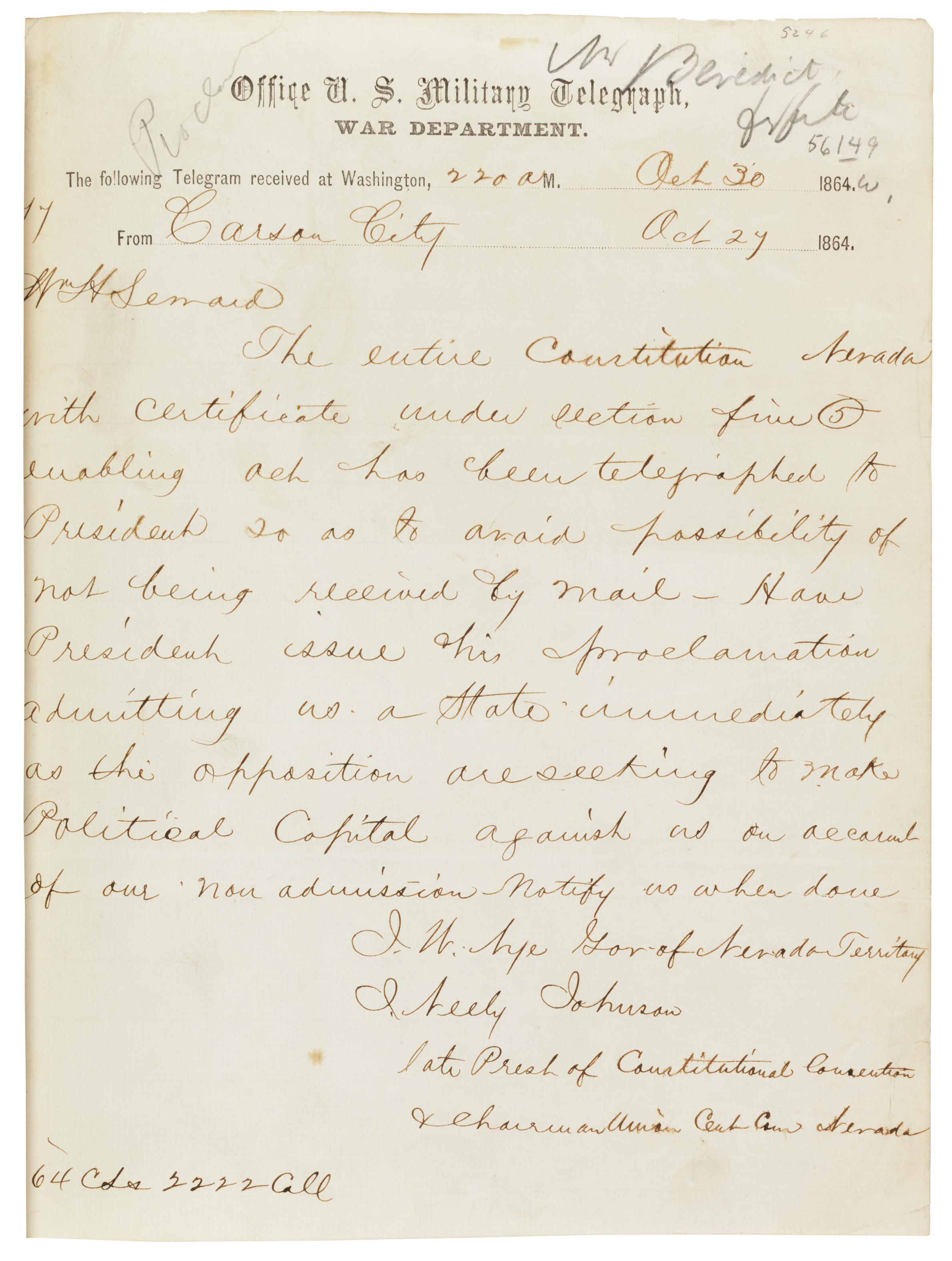 EnlargeDownload Link
Page 1 of the Nevada Constitution National Archives, General Records of the Department of State 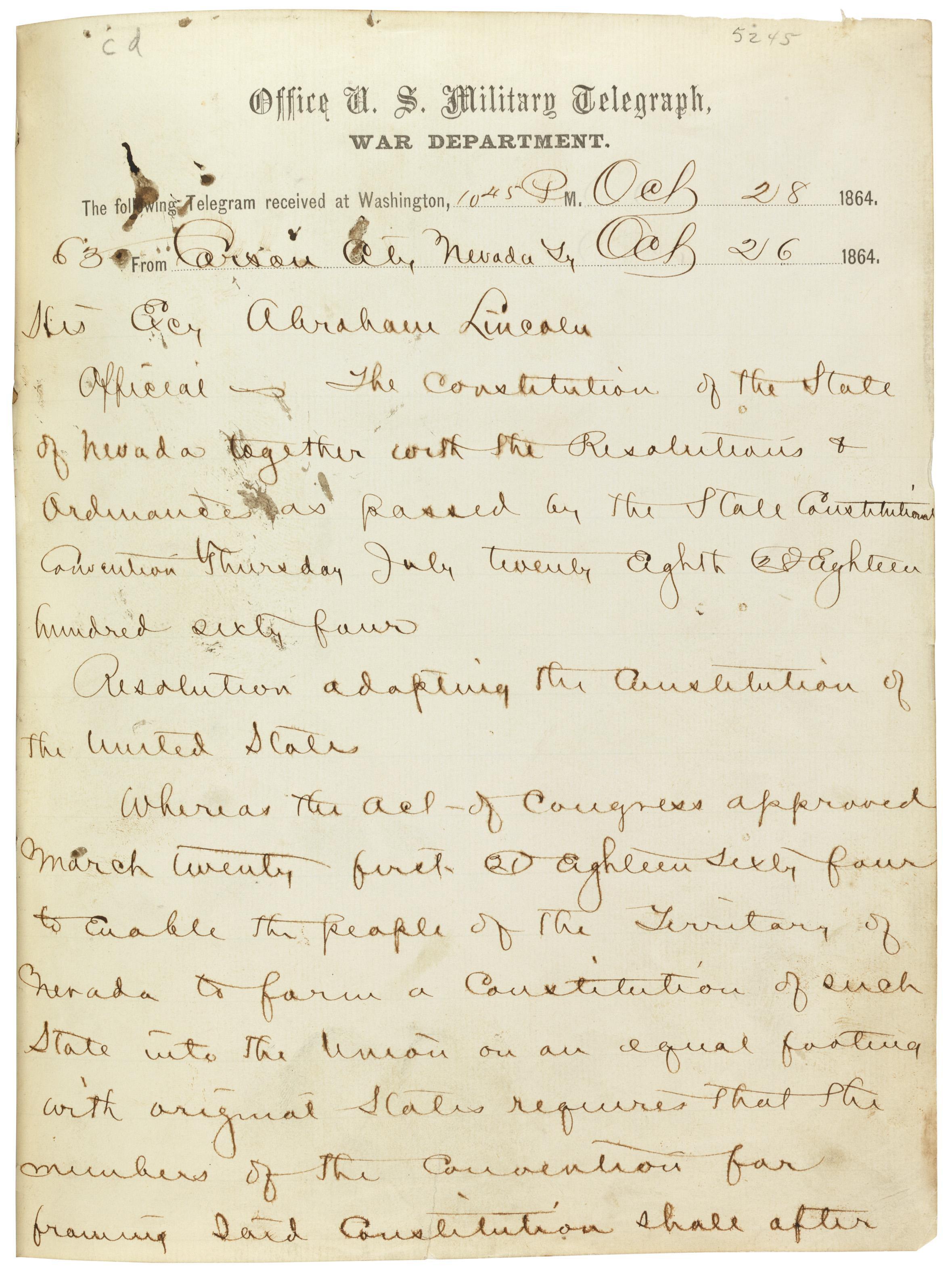 EnlargeDownload Link
Page 2 of the Nevada Constitution National Archives, General Records of the Department of State 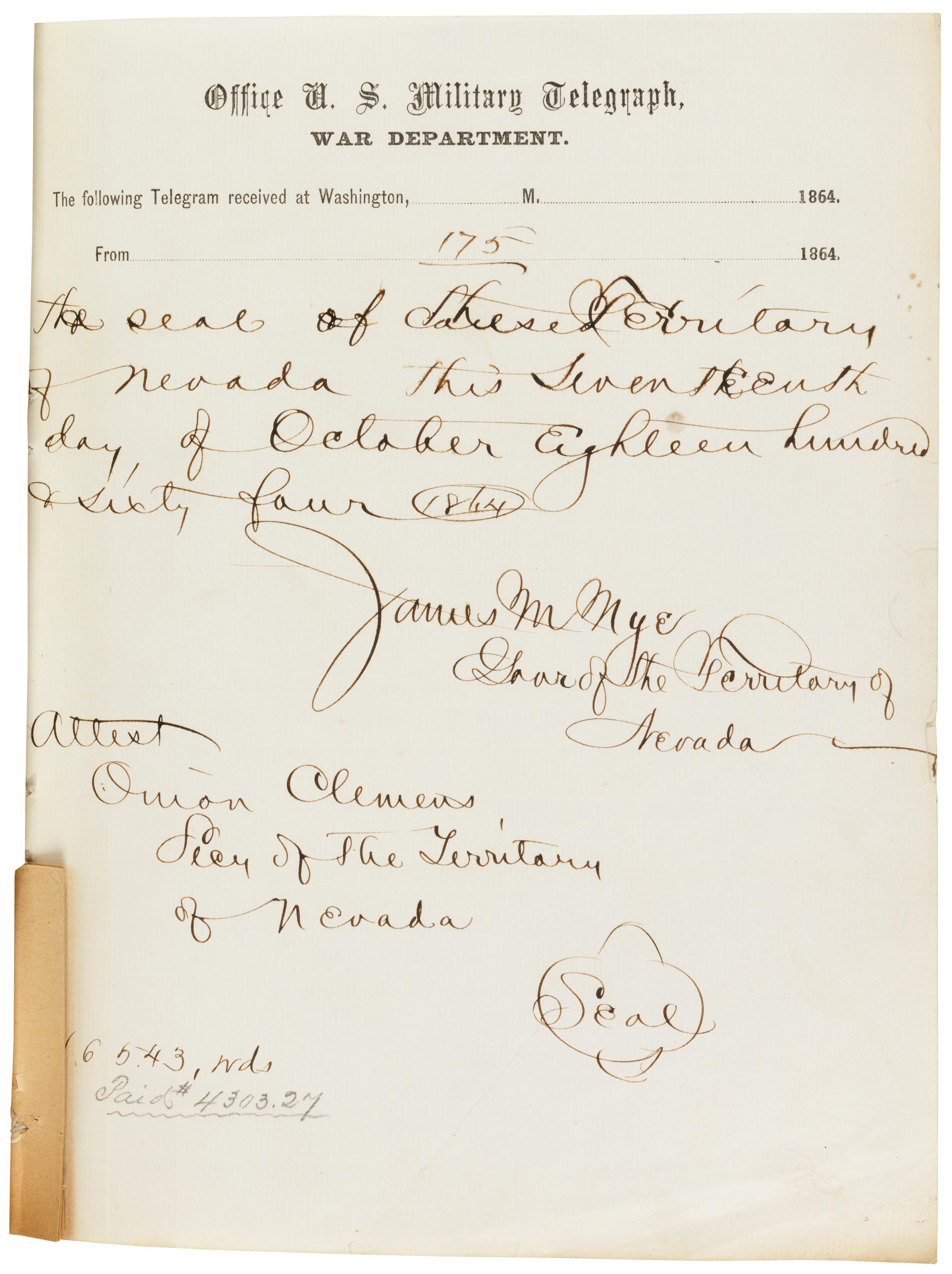