A manuscript letter in the hand of Abraham Lincoln to Treasury Secretary Salmon P. Chase, dated November 14, 1863, was brought to the Document Conservation Laboratory for examination on May 7, 2009. The objective of examination was to look for physical evidence whether or not this letter had originally been half of a folio, formerly tipped onto page five of Volume 91, Record Group 56, “Letters Received from the Executive Officers (“AB”), 1831-1869.” At present, on page five is a half folio with a torn edge at the left side. The letter to be examined also has a torn edge at the left side. Official Executive Mansion letterhead stationery of the time was a single folio, that is, a single sheet with a fold at the left side to create four pages and with the letterhead at the top of the first page of the folio. The letter and the half folio in the RG 56 Letters Received volume were examined with normal and transmitted light, ultraviolet lamp and stereo-binocular microscope. The letter and half folio are identical in visual appearance. They are on soft tan, medium-weight, smooth machine-made wove paper of even and identical formation. Both letter and half folio were measured with a micrometer and have the identical thickness of .012 millimeters. The one physical difference noted is the unevenly trimmed bottom edge of the letter. It appears approximately ⅛” to ¼” of the sheet is missing; otherwise the overall dimensions (5” x 8”) are identical.

When the folio was torn along its fold, small portions of the upper most layers of the paper support were torn from page three, leaving behind matching indentations commonly referred to as “beveled” or “shelved” areas. The small portions of the support that remain attached along the folio fold (pages one and two) exactly match the shelved areas on the remaining folio half (pages three and four) adhered in the RG 56 volume. They would fit together exactly if reattached. Please refer to the accompanying photographic evidence that illustrates this point. 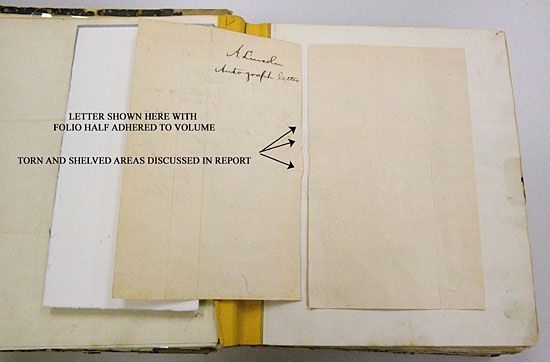 In addition, there are exactly matching creases near the right edge of page one and the right of page three that were created by repeated folding to access the notations on page four of the folio when the intact folio was adhered to the volume. The identical visual characteristics of the letter and folio half, as well as the corresponding physical damages confirm that the letter and the half folio were originally one folio. They at one time comprised a single folio of official Executive Mansion stationery, adhered into the RG 56 Letters Received Volume 91 on page five.

This page was last reviewed on March 25, 2019.
Contact us with questions or comments.