The following is a document alert -- part of a program sponsored by the National Archives to notify the media of documents in the National Archives holdings that are relevant to national holidays, anniversaries or current events. This program which is based on original records from the National Archives, its 13 Presidential libraries and 14 regional archives, is designed to offer the media an historical perspective on events that occur periodically and to highlight historical antecedents to current political or diplomatic initiatives.

These historic records can be found in the records of the Social Security Administration. Many of these records are preserved by The Franklin D. Roosevelt Presidential Library and Museum, one of 13 presidential libraries administered by the National Archives.

“If, as our Constitution tells us, our Federal Government was established . . . ‘to promote the general welfare,’ it is our plain duty to provide for that security upon which welfare depends.” — President Franklin D. Roosevelt (FDR), June 8, 1934

“We put those payroll contributions there so as to give the contributors a legal, moral, and political right to collect their pensions and their unemployment benefits. With those taxes in there, no damn politician can ever scrap my social security program.” — FDR recalling why Social Security was based on payroll contributions, 1941

On August 14, 2010 Americans will mark the 75th birthday of the most far-reaching social program in this nation’s history — Social Security. The crown jewel of FDR’s New Deal, Social Security is one of his greatest legacies to the nation. Historians concur on its singular importance. “No other New Deal measure proved more lastingly consequential or more emblematic of the very meaning of the New Deal,” notes Stanford historian David M. Kennedy. Roosevelt would have agreed. “He always regarded the Social Security Act as the cornerstone of his administration,” Secretary of Labor Frances Perkins recalled, “and . . . took greater satisfaction from it than from anything else he achieved on the domestic front.”

On August 14, 1935, the Social Security Act established a system of old-age benefits for workers, benefits for victims of industrial accidents, unemployment insurance, aid for dependent mothers and children, the blind, and the physically handicapped.

Before the 1930s, support for the elderly was a matter of local, state and family rather than a Federal concern (except for veterans’ pensions). However, widespread suffering caused by the Great Depression brought support for numerous proposals for a national old-age insurance system. On January 17, 1935, President Roosevelt sent a message to Congress asking for "social security" legislation. The same day, Senator Robert Wagner of New York and Representative David Lewis of Maryland introduced bills reflecting the administration’s views. The resulting Senate and House bills encountered opposition from those who considered it a governmental invasion of the private sphere and from those who sought exemption from payroll taxes for employers who adopted government-approved pension plans. Eventually the bill passed both houses, and on August 15, 1935, President Roosevelt signed the Social Security Act into law.

The act created a uniquely American solution to the problem of old-age pensions. Unlike many European nations, U.S. social security "insurance" was supported from "contributions" in the form of taxes on individuals’ wages and employers’ payrolls rather than directly from Government funds. The act also provided funds to assist children, the blind, and the unemployed; to institute vocational training programs; and provide family health programs. As a result, enactment of Social Security brought into existence complex administrative challenges. The Social Security Act authorized the Social Security Board to register citizens for benefits, to administer the contributions received by the Federal Government, and to send payments to recipients. Prior to Social Security, the elderly routinely faced the prospect of poverty upon retirement.

To mark this anniversary, the FDR Library and Museum, in collaboration with the Social Security Administration, will present the exhibition “Our Plain Duty”: FDR and America’s Social Security. The exhibit opens Sunday, August 15, 2010, and runs through July 2011.

Following the passage of the Social Security Act of 1935, a visiting nurse visits a rural family Franklin D. Roosevelt Presidential Library and Museum

This page was last reviewed on February 12, 2019.
Contact us with questions or comments. 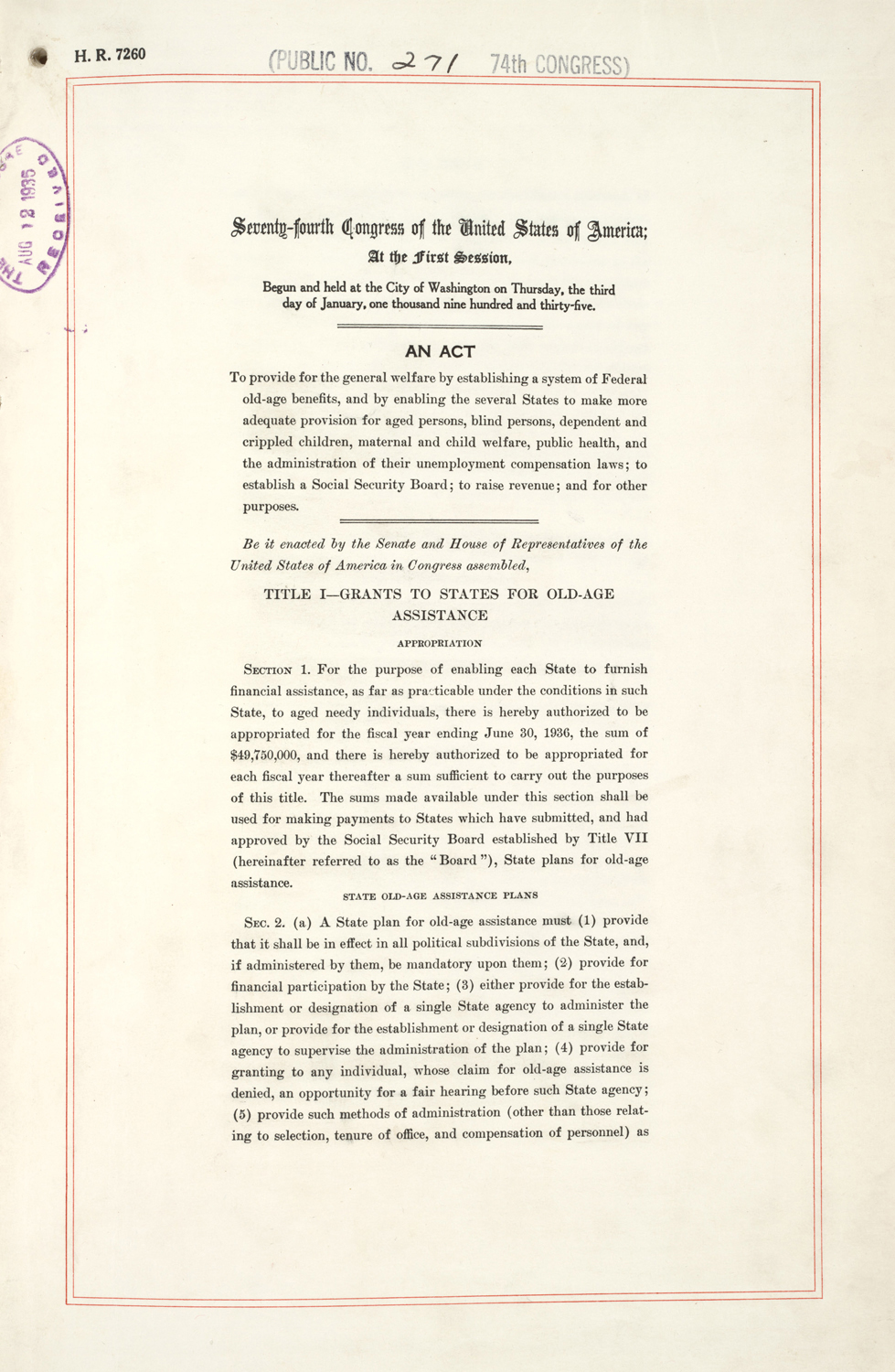