Washington, DC…The National Archives announces the release of “FBI/CIA Films: Declassified,” produced in partnership with Topics Entertainment. Featuring more than 29 hours of historical footage selected by archivists from the National Archives’ vast motion picture holdings, this collection of gripping films takes you inside the minds of some of America’s most notorious criminals and into the files of covert operations and criminal investigations.

The 17-DVD set is comprised of seven sections:

The boxed set sells for the suggested retail price of $89.99 and is available at Sam’s Club, Costco, Amazon, and other major retailers nationwide, as well as at selected NARA museum shops.

Founded in 1990, TOPICS Entertainment is the largest, privately owned multimedia publishing company in the United States. TOPICS offers more than 300 consumer language‑learning, education, and entertainment multimedia products, and is the exclusive software publisher/distributor for National Geographic, Rand McNally, World Book, Kaplan, Scholastic, and several others. An active supporter of the environment and education, TOPICS donates 5 percent of pre‑tax profits to a variety of conservation and environmental education organizations. Visit its web site at www.topics‑ent.com.

This page was last reviewed on January 7, 2013.
Contact us with questions or comments. 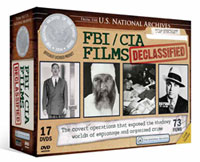 “This selection of historic documentary films from the CIA, FBI, and OSS takes you inside the shadowy and violent worlds of espionage and crime. Their images reveal the real betrayals and heroics, the sophisticated spy craft, and the covert operations that win wars, inform foreign policy, and bring criminals to justice.” – Marcia Kolko, lead project archives specialist