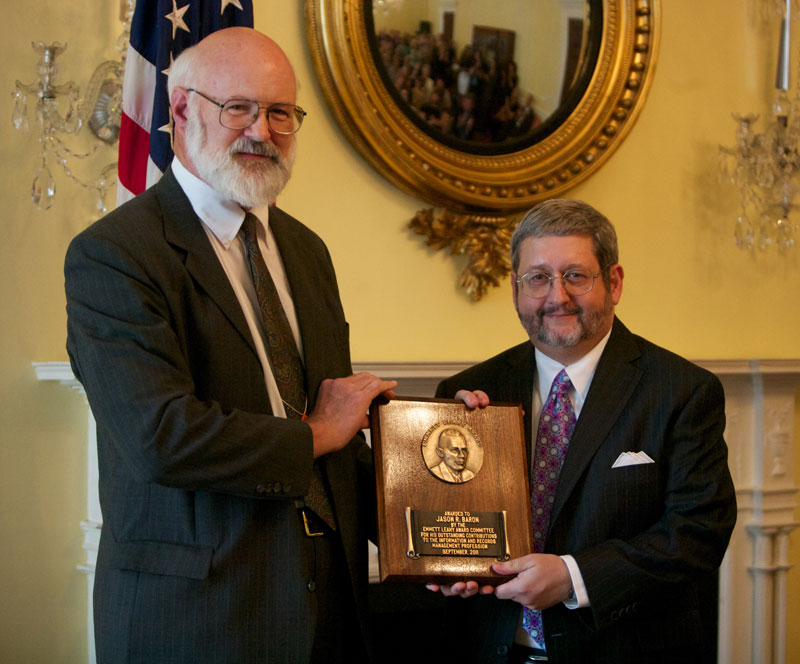 The award was presented to Mr. Baron based on his outstanding achievements, including:

At the ceremony Judge Facciola said, “Jason Baron has made an invaluable contribution to the way our society considers how to find what we need from an ever expanding source of information. No one has confronted that question with more creativity and imagination.”

Archivist of the United States David S. Ferriero also praised Mr. Baron saying, “In his time at the Department of Justice and the National Archives, he has become what many people regard as the “go to” lawyer in the government on issues involving preservation of electronic records under the Federal Records Act.” Mr. Ferriero went on to say, “Jason has been a thought leader in pushing the federal government to adopt smarter forms of electronic archiving, and in finding better ways to search through large volumes of the government’s electronically stored record information.”

While a lawyer at the Justice Department in 1995, Mr. Baron’s early contributions in the field of records management were acknowledged when the National Archives presented him with an Achievement Award for his work on National Archives email regulations. In addition to many other awards received during his time in public service, his advocacy for e-discovery was recognized with a Fed 100 Award in 2008. As an internationally-known expert, Mr. Baron has published numerous scholarly articles and has been invited to lecture world-wide on the subjects of record-keeping and e-discovery.

In accepting the award, Mr. Baron stated as part of his remarks that being Director of Litigation at the National Archives has been his “dream job.” He added, “It has been such a great privilege to be able to work on important issues involving electronic records during my time as a lawyer at this agency.” He challenged records managers, archivists, and lawyers to find smarter ways to leverage automated technologies to eliminate wasted time and effort in performing recordkeeping functions.