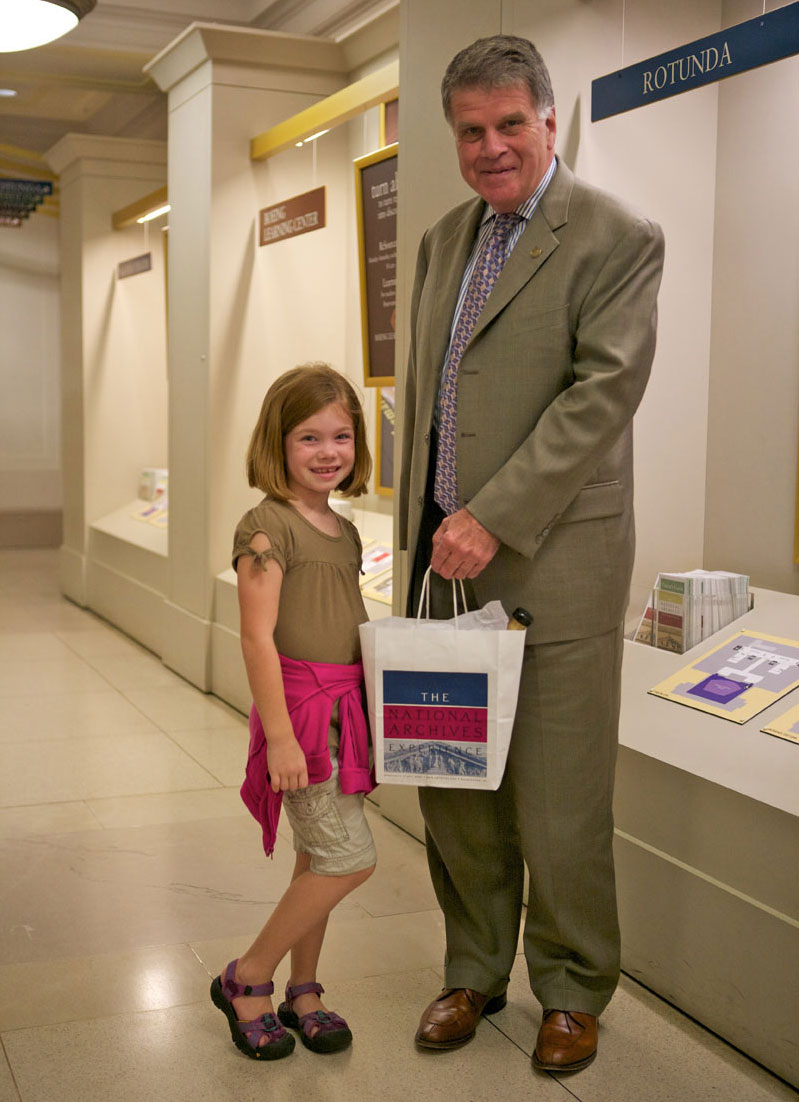 Washington, DC…The National Archives welcomed its millionth visitor for Fiscal Year 2011 on Wednesday, September 21, 2011. Second grader Brooklyn Robbins, from Cordova, Tennessee, was warmly greeted by Archivist David S. Ferriero. Expressing surprise as the person reaching this milestone, Brooklyn beamed with pride and said this was a visit she would always remember. This was Brooklyn’s first visit to the National Archives.

Large numbers of visitors come to the National Archives each year to see the Rotunda for the Charters of Freedom, the Public Vaults exhibition, programs and films in the William G. McGowan Theater, and changing exhibits in the Lawrence F. O’Brien Gallery.

“The Charters of Freedom: Our Nation’s Founding Documents” exhibit takes a fresh look at the Declaration of Independence, the Constitution, and the Bill of Rights and uses facsimiles of historical documents from the holdings of the National Archives to answer two key questions about each Charter --“How did it happen?” and “Why is it important?” The new exhibit is an attempt to answer questions visitors often ask when see the Charters.

Surrounding the Rotunda for the Charters of Freedom’s centerpiece cases holding the Declaration of Independence, Constitution, and Bill of Rights, highlights of the new exhibition include “Secrets of the Documents” and special quotes from the Founding Fathers.

The Public Vaults exhibition brings visitors beyond the Rotunda and creates the feeling of entering the stacks and vaults of the National Archives. Containing over 1,100 records and 22 state-of-the-art interactive stations, the exhibition shows the raw materials from which history is made, while also relaying compelling personal stories of both our nation’s leaders and “ordinary” Americans.

The elegant William G. McGowan Theater is a centerpiece of the National Archives Experience. By day the McGowan Theater continuously shows the 11-minute introductory film “Democracy Starts Here.” By night, this theater has become one of the nation’s leading centers for documentary film and a forum for programs that explore American history, democracy and government.

The Lawrence F. O’Brien Gallery is a 3,000 square-foot gallery for special and traveling exhibitions at the National Archives. Exhibitions in the Lawrence F. O’Brien Gallery explore newsworthy and timely themes, issues, events, and turning points in our nation’s history. The current exhibition, What’s Cooking, Uncle Sam?, explores the Government’s effect on the American diet. Visitors can unearth the stories and personalities behind the increasingly complex programs and legislation that affect what Americans eat. There are over 100 original records in the exhibit—including folk songs, war posters, educational films, and even seed packets. The exhibition, which is free and open to the public, runs through January 3, 2012, in the Lawrence F. O’Brien Gallery of the National Archives Building. For information on “What’s Cooking, Uncle Sam?” [www.archives.gov/exhibits/whats-cooking]. What's Cooking, Uncle Sam? is made possible in part by the Foundation for the National Archives with support from Mars Incorporated and Mars Food.

Visitors have one last important stop to make before they leave – a special shop where they can purchase some treasures of their own. Archives Shop sales have far exceeded initial projections. By far, the most popular items are reproductions of the Charters of Freedom.

The National Archives Experience is free and open to the public. The National Archives building is located between 7th and 9th Streets, NW on Constitution Avenue. Metro stop: Archives/Navy Memorial. For information on individual and group tours [www.archives.gov/national-archives-experience/visit/visit_groups.html]. Exhibit hours are 10 a.m. to 5:30 p.m. through March 14 (closed Thanksgiving and December 25). For up-to-date information on events and programs, visit www.archives.gov