Hollywood Goes to War! from the National Archives

Hollywood Goes to War! sells for the suggested retail price of $54.99.

Other DVDs newly released by the National Archives and TOPICS include:

Products are available at Costco, Sam’s Club, and other major retailers nationwide, as well as at selected National Archives Museum Shops.

Founded in 1990, TOPICS is the largest privately owned multimedia publishing company in the United States. TOPICS publishes the number one best-selling software lines Instant Immersion (language learning) and Success (education). In addition to the National Archives, the company partners with quality brands such as National Geographic, PBS, Scholastic, and Kaplan. An active supporter of the environment and education, TOPICS donates 5 percent of profits to a variety of conservation and environmental education organizations. Visit its web site at www.topics-ent.com. 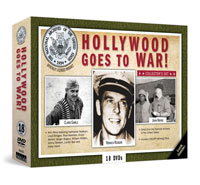 ”This collection of star-lit and Academy Award®–winning documentaries assembled by motion picture specialists from the National Archives is evidence of moviemaking at its best. Iconic Hollywood directors and leading actors combined their talents to create films that not only stoked the fires of patriotism during war, but also addressed social and political challenges that were to define the decades ahead. The U.S. now had a new weapon in its arsenal that proved to be as potent as its air power or sea power…star power.” – Marcia Kolko, lead project Archives Specialist