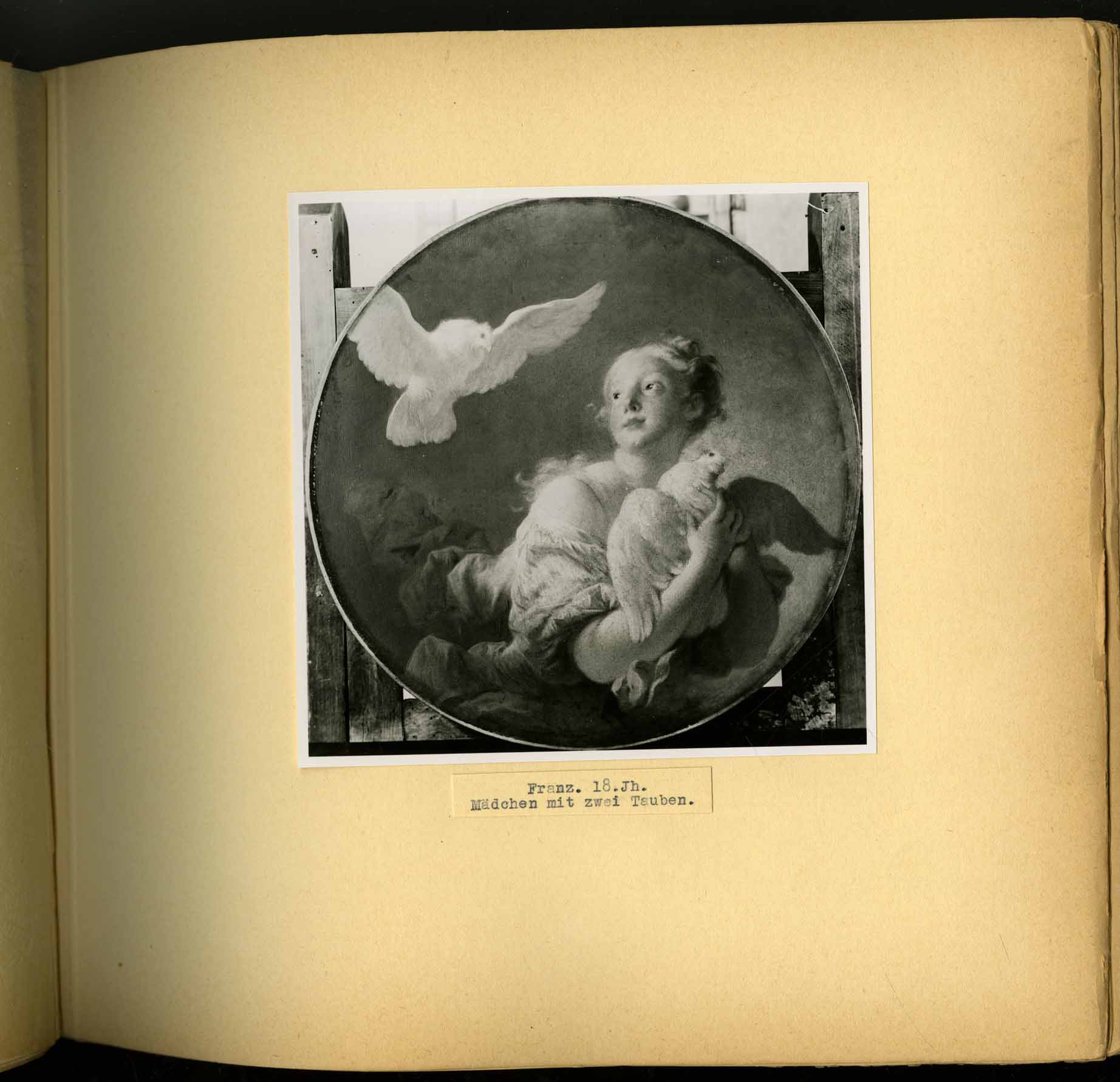 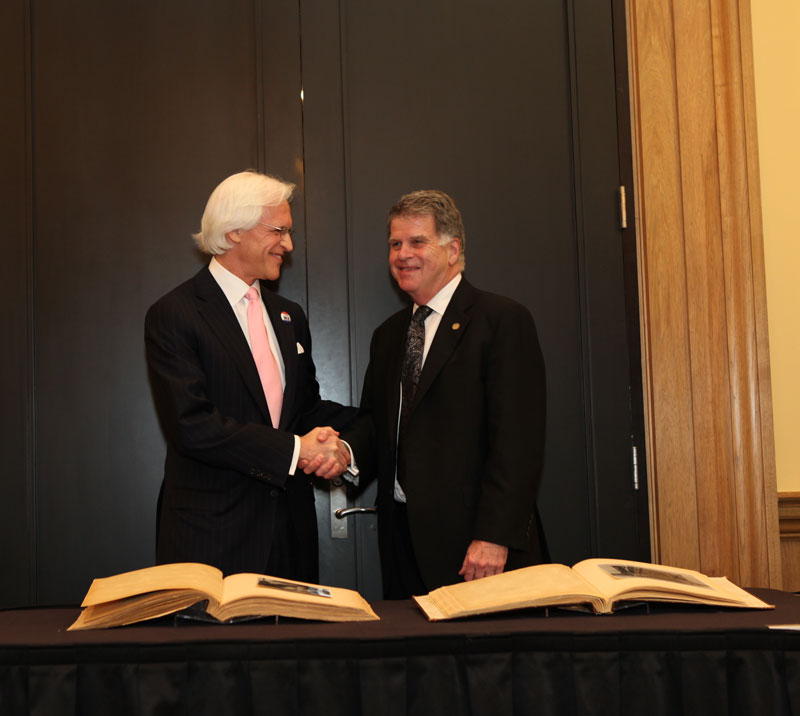 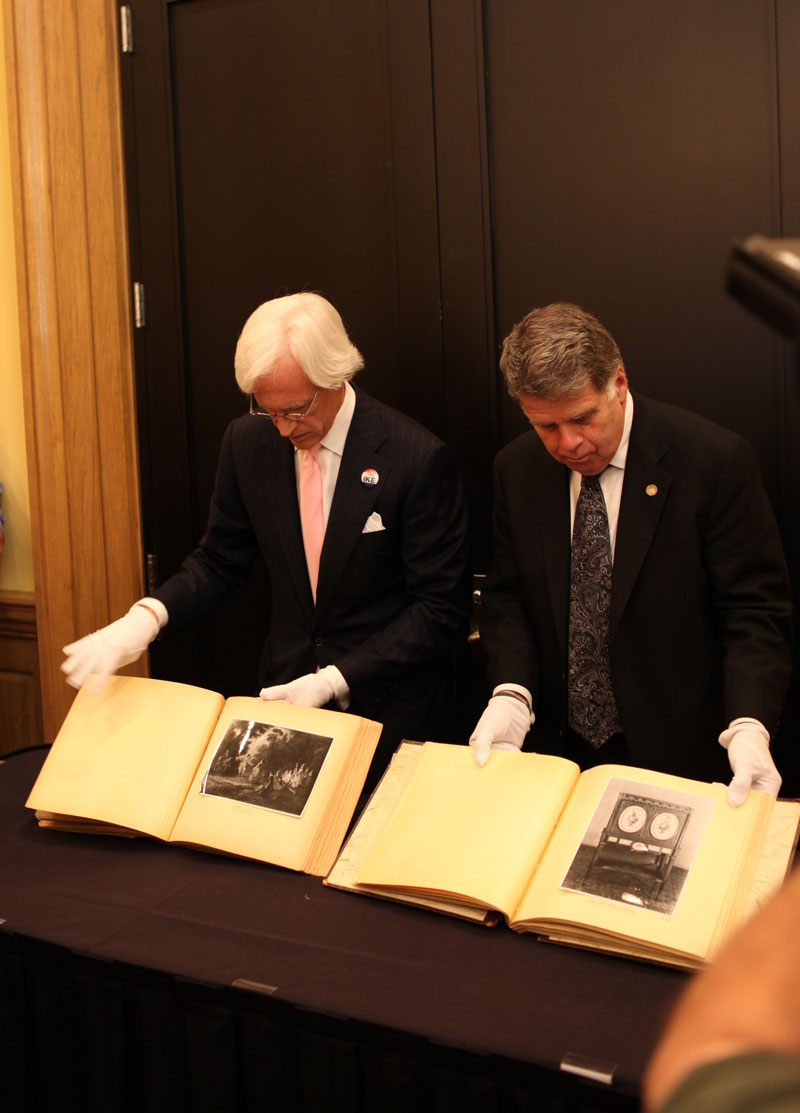 These albums, created by the staff of a special Nazi task force, the Einsatzstab Reichsleiter Rosenberg, or ERR, document the unprecedented and systematic looting of Europe by Adolf Hitler and the Nazis. The ERR was the main Nazi agency engaged in the theft of cultural treasures in Nazi-occupied countries. As the ERR staff looted, photographed and catalogued the French collections, they created leather bound albums, including the two being donated today. Each page of the album contained a photograph of one stolen item.

The Archivist hailed this discovery as "one of the most significant finds related to Hitler and the Nazi’s theft of art and other cultural treasures to be found since the Monuments Men Foundation’s previous discovery of Albums 6 and 8. It is exciting to know that original documents are shedding light on this important aspect of World War II. Documents such as these may play a role in helping victims recover their treasures. The National Archives is grateful to Mr. Edsel and the Monuments Men Foundation for today’s donation of Albums 7 and 15, which will allow scholars and historians immediate use of these materials.”

“The Foundation often receives calls from veterans and their heirs, who don’t know the importance of items they may have picked up during their service, or aren’t aware that anyone is looking for the items,” Foundation President Robert M. Edsel stated. “These albums are just the tip of the iceberg for hundreds of thousands of cultural items still missing since World War II. The role of the Monuments Men in preserving cultural treasures during conflict was without precedent. We honor their legacy by completing their mission.”

In the closing days of World War II, U.S. soldiers entered Adolf Hitler’s home in the Bavarian Alps. Many picked up trinkets as souvenirs as proof that they had been inside. Cpl. Albert Lorenzetti and Private First Class Yerke Zane Larson each took one leather bound album. Neither man knew the significance of the albums, other than being a memento of their war service. Heirs to both men contacted the Monuments Men Foundation for the Preservation of Art, a not-for-profit organization that received the 2007 National Humanities Medal, after reading media stories about the Foundation’s work involving the restitution of other valuable World War II documents.

Yerke Zane Larson proudly served in the 501st Battalion of the 101st Airborne Division, “the Screaming Eagles.” His daughter Sandra Runde stated: “If my father was still living, I know he would be pleased to serve as an example for other veterans and their families of the importance of returning cultural treasures, just as the Monuments Men set the standard for protection of culture during armed conflict.” In the final days of the World War II, Larson picked up Album 15 as a souvenir while in Hitler’s home, known as the Berghof.

Cpl. Albert Lorenzetti, who served in the 989th Field Artillery Battalion, removed Album 7 from the Berghof the same week as Larson as proof he’d been in Hitler’s home. His niece, Jane Gonzalez, commented: “My uncle was from a generation that grew up making sacrifices and putting others before themselves,” said Ms. Gonzalez. “I believe that donating this album to the National Archives and thereby assuring its preservation and availability to the public honors his legacy and is a testament to his personal character and patriotism.”

In the albums, a letter representing the family from which the item was stolen and an inventory number is noted beneath each image; for example in Album 7, “R2951” would be the 2951st object stolen from the Rothschild family. The albums were specifically intended for Hitler in an effort to keep him apprised of the ERR’s progress in France. According to noted historian Dr. Birgit Schwarz, once Hitler received the first set of albums on his birthday in April 1943, he issued a directive that incorporated the confiscated items into “Special Commission Linz.” This organization oversaw building the collection for the Führermuseum, an unrealized museum complex Hitler planned to build in his hometown of Linz, Austria, as well as distribution of art to regional museums throughout the Reich. As the director, Hitler decided which items would be placed in certain museums.

ERR Albums 7 and 15 are significant discoveries. Album 7 includes images of sixty-nine paintings which represented very early thefts, some as early as 1940 and early inventory numbers such as EW4 (the fourth item stolen from Elizabeth Wildenstein). Images of two important paintings by Jean-Honoré Fragonard are featured in Album 7. Girl with Two Doves, or Mädchen mit zwei Tauben (inventory code: R38) sold at auction in 2000 for over $5 million after having been properly repatriated by the Monuments Men in 1946. Album 7 also includes The Dance Outdoors, or Tanz im Freien, (inventory code: R67) attributed to the painter Jean-Antoine Watteau, which was intended for Hitler’s Führermuseum.

Although the majority of the paintings featured in Album 7 appear to have been properly restituted after the war, four paintings are listed on the ERR Database as not having been restituted. Album 15 contains photos of forty-one pieces of furniture, primarily from the Rothschild family. Three of those pieces, inventory codes R917, R943, and R944, were prominently featured in one of the exhibits staged at the Jeu de Paume Museum in Paris for Reichsmarschall Hermann Göring to select items for his own collection.

In May 1945, thirty-nine original ERR albums were discovered at Neuschwanstein by the Monuments Men. They had been stored there by the Germans along with records that documented their confiscations and thousands of looted items. These albums were subsequently taken to the Munich Central Collecting Point where they were used by the Monuments Men to assist in the restitution process. In late 1945 these albums were used as evidence at the Nuremberg trials to document the massive Nazi art looting operations.

Today the National Archives has custody of the original 39 albums, as well as two additional albums, 6 and 8, discovered by the Monuments Men Foundation and donated to the National Archives in 2007. Like Album 7, Albums 6 and 8 were picked up by a member of the 989th Field Artillery Battalion who was stationed in the Berchtesgaden area in the closing days of the war. Mr. Edsel stated about this occurrence: “I hope discoveries such as these will encourage other members of the 989th Battalion and their families, as well as all veterans, to look in their attics and basements for any lost wartime items as they may hold the clues to unravel this unsolved mystery.”

This page was last reviewed on March 21, 2019.
Contact us with questions or comments.