Special programs and display of the original Japanese Instrument of Surrender*

To mark the 70th Anniversary of the end of World War II, the National Archives will host special programs and display the original Japanese Instrument of Surrender * that officially ended the war. This display is free and open to the public at the National Archives Museum, located on the National Mall on Constitution Avenue at 9th Street, NW. Metro accessible on Yellow or Green lines, Archives/Navy Memorial station. Museum hours are 10 a.m. to 5:30 p.m., daily. Additional information on exhibits and programs can be found online. Program attendees should use the Special Events entrance on Constitution Avenue at 7th Street, NW.

FEATURED DOCUMENT EXHIBIT: “Seventy Years Ago: The End of World War II”
National Archives East Rotunda Gallery, August 27 – October 28, 2015
On September 2, 1945, in a formal ceremony aboard the USS Missouri in Tokyo Bay, Japan, representatives of the Japanese government signed this Instrument of Surrender, officially ending World War II. The formal ceremony took less than 30 minutes. Prepared by the U.S. War Department and approved by President Harry S. Truman, this document set out in eight short paragraphs the complete capitulation of Japan. The short second paragraph went straight to the heart of the matter: “We hereby proclaim the unconditional surrender to the Allied Powers of the Japanese Imperial General Headquarters and of all Japanese armed forces and all armed forces under Japanese control wherever situated.”

Chief of the Army General Staff General Douglas MacArthur, Commander in the Southwest Pacific, signed for the United States and accepted the surrender in his capacity as the Supreme Commander for the Allied Powers. Fleet Admiral Chester Nimitz also signed for the United States. Then representatives from eight other Allied nations signed, including the Republic of China, the United Kingdom, and the Soviet Union. After the Instrument of Surrender was presented to President Harry S. Truman at the White House on September 7, 1945, this document, in its original leather case, was exhibited at the National Archives and formally accessioned into its holdings. 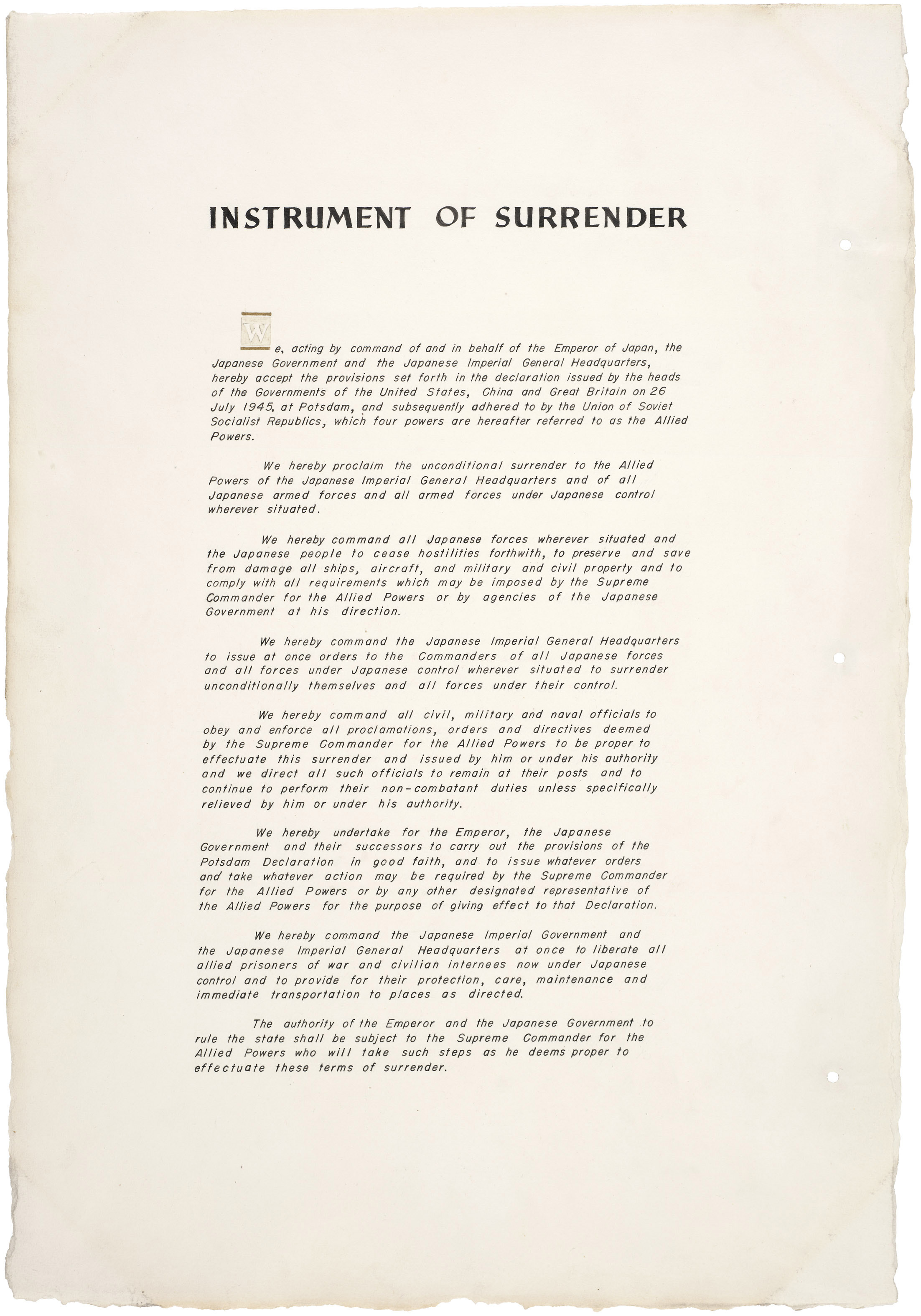 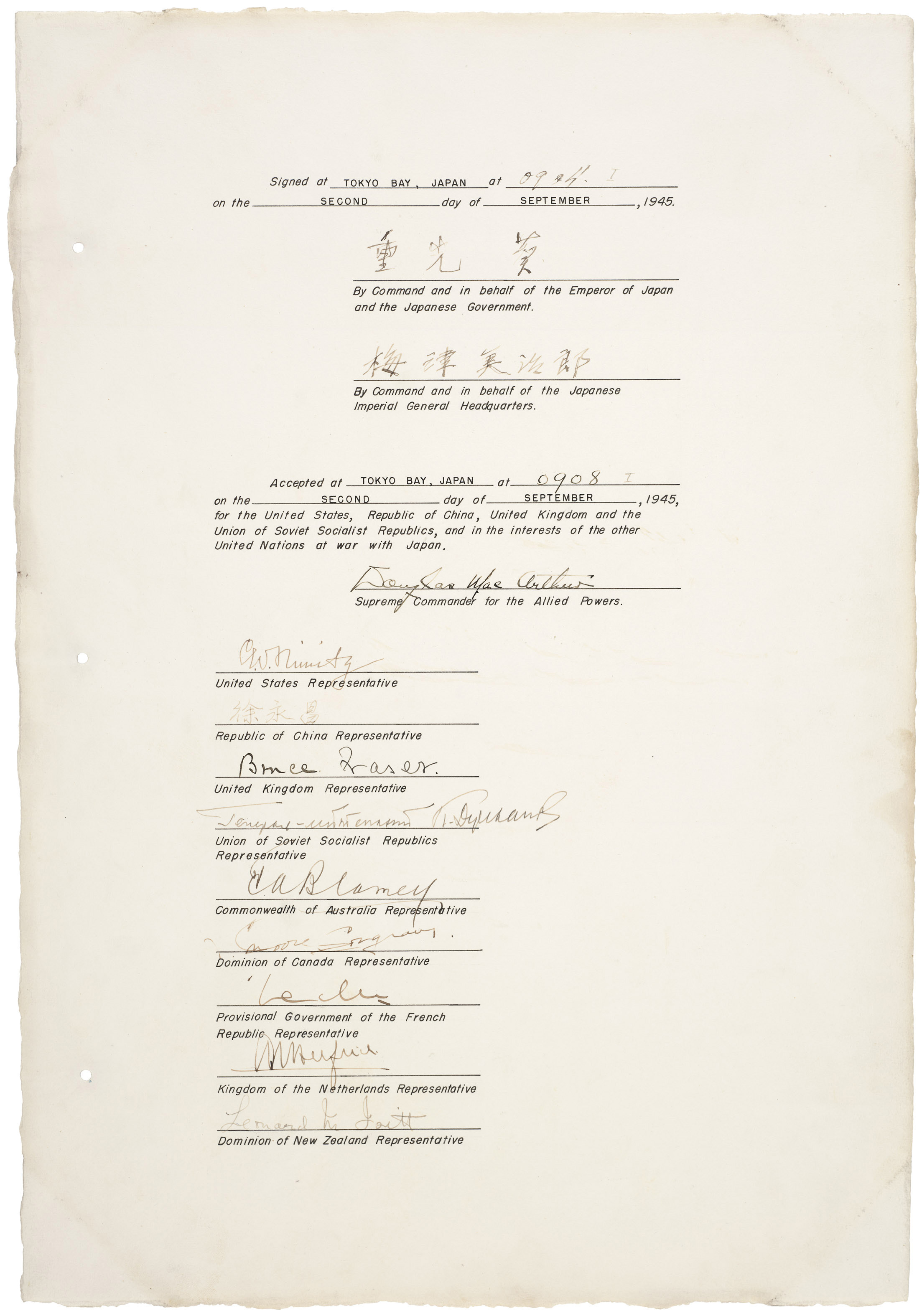 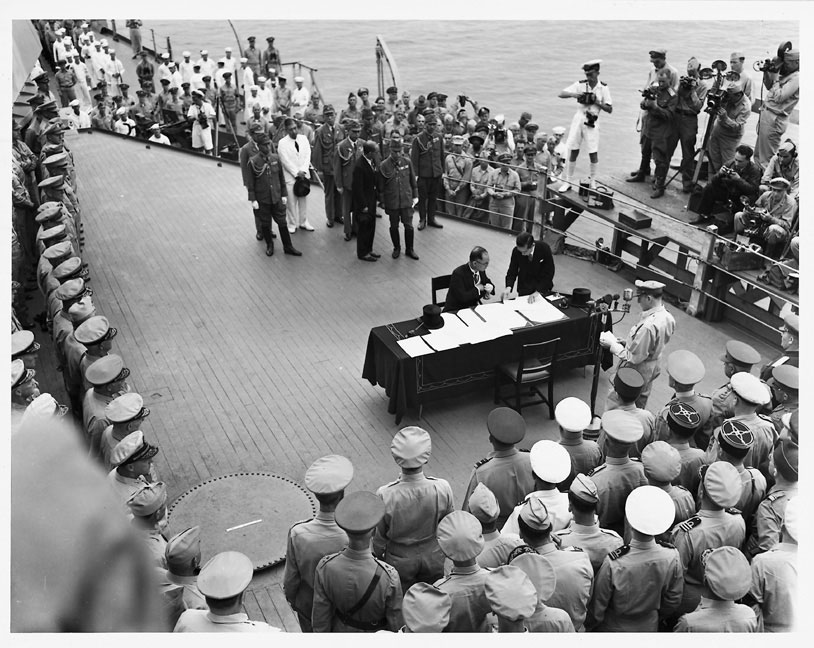 Enlarge
Signing the Instrument of Surrender, September 2, 1945
Signing the Instrument of Surrender September 2, 1945 – Japanese Foreign Minister Mamoru Shigemitsu signs the surrender document as delegation members and troops on the battleship USS Missouri witness. U.S. General Douglas MacArthur stands at the microphone at the far right. National Archives, General Records of the Department of the Navy 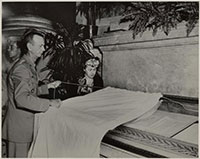 This page was last reviewed on November 6, 2018.
Contact us with questions or comments.