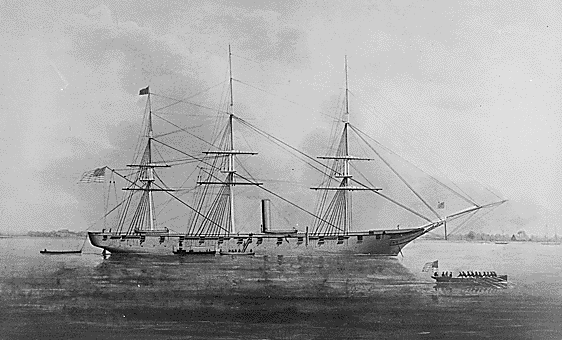 Among the vessels that have documents scheduled for digitization under the project is the U.S.S. Hartford, which has long, more than 100 years, and storied history including its participation in the Battle of Mobile Bay. Read more about the some of the sailors who served aboard the Hartford at Prologue.

Log entries handwritten by U.S. Navy seamen nearly 140 years ago remain relevant even in the technological era. A grant recently awarded to the University of Washington, will allow the digitization of National Archives holdings including logbooks, muster rolls and related materials from U.S. naval vessels focusing on the period from 1861 to 1879.

Project funding was awarded to the university by the Council on Library and Information Resources, which is supported by funding from The Andrew W. Mellon Foundation. The grant award, totaling $482,000 lists the University of Washington, the National Archives and Records Administration, and the National Archives Foundation as institutional partners.

The project, titled “Seas of Knowledge: Digitization and Retrospective Analysis of the Historical Logbooks of the United States Navy,” will digitize muster rolls of the names of all the enlisted sailors on board. When combined with log books that list the names of officers, historians and family researchers will have unprecedented access to the day-to-day details of life during this period in history.

“As a Navy man, I find these deck logs of great interest. They are a treasure-trove of information not only for scientists, but for historians, genealogists, and the public," said David S. Ferriero, Archivist of the United States.  "We are honored to be part of the Seas of Knowledge project, and are grateful to Council on Library and Information Resources and the Andrew W. Mellon Foundation for helping us make these historic records more widely available.”

After making digital images of the log books held by the National Archives, the project will recover ships’ positions, weather records, oceanographic data and other historical information through the Old Weather citizen-science program that trains volunteers to transcribe the logs’ handwritten entries. So far volunteers have transcribed more than 3 million weather records, and more than 1 million of those have been quality-checked and added into global climate databases.

In addition to the logs, the project will digitize Navy Muster Rolls held by the National Archives dating from 1861-1879. Musters are the crew list of enlisted men and sometimes contrabands (runaway slaves seeking refuge/safety by making way to navy ships). A limited number of Revenue Cutter and Coast and Geo Survey vessels records will also be included.

This is the third group of projects that supports the creation of digital representations of unique content of high scholarly significance that will be discoverable and usable as elements of a coherent national collection. The program is supported through funding from the Andrew W. Mellon Foundation. The Council on Library and Information Resources, which awarded the grant, is an independent, nonprofit organization that forges strategies to enhance research, teaching, and learning environments in collaboration with libraries, cultural institutions, and communities of higher learning.

This page was last reviewed on January 29, 2018.
Contact us with questions or comments.