New Life for the Charters of Freedom

The Story So Far 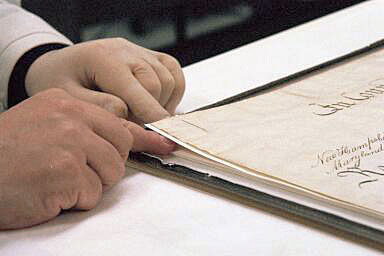 Within its 1950-era encasement, the Transmittal Page rested on 12 sheets of high-quality paper that were custom-made by the National Bureau of Standards. (NARA, Photo by Earl McDonald)

The Constitution of the United States is getting the best word-by-word, letter-by-letter inspection it has had since it was signed at the Constitutional Convention in Philadelphia in 1787.

Experienced document conservation experts—for the first time in nearly fifty years—are opening, one by one, the encased pages of the Constitution, the Declaration of Independence, and the Bill of Rights.

It is part of a multiyear project to re-enclose these documents—known collectively as the Charters of Freedom—in state-of-the-art encasements and return them to their permanent home in the Rotunda of the National Archives Building in Washington. Along the way, the documents are getting any necessary conservation treatment.

The overall Charters project, funded by both congressional appropriations and private donations, includes renovations to the Rotunda and the surrounding public exhibit areas of the National Archives Building. Work has already begun on the Charters, and these photographs, taken by Earl McDonald of NARA's staff, show what's happening to these important documents in the process. The parchments are being inspected and tested. Dirt and other foreign substances are being removed. The ink is being inspected and analyzed, and steps are being taken to prevent further deterioration. And all of it occurs in up-to-date labs under expert supervision.

Meanwhile, at the National Institute of Standards and Technology in Rockville, Maryland, work continues on the new encasements, with NARA experts always available to offer guidance or advice. The new titanium and aluminum encasements incorporate all the scientific advances possible and will include only materials that are not harmful to the important parchments they will contain. The new encasements will hold a wide array of space-age equipment to monitor the inside environment. For example, a light beam will bounce off three mirrors inside the base, picking up data that would alert conservators to any leak of the argon gas.

The first seal on a current 1952 encasement was broken last fall when the Transmittal Page to the Constitution, which is rarely displayed, was removed. It was the first to get conservation treatment and be placed in a prototype version of the new encasement, where it has been carefully monitored. Next to be opened was page 2 of the Constitution, which contains part of Article I and the beginning of Article II. Pages 2 and 3 are also rarely displayed.

An exhibit called "Preserving the Charters," on display September 15, 2000–July 4, 2001, tells the story of NARA's efforts to design and build the new encasements. Further information about the Charters project can be found on its new web site.

Page 3 will be opened next, and when pages 1 and 4 of the Constitution, the Declaration of Independence, and the Bill of Rights are taken off display on July 5, 2001, they too will be opened and get the same treatment. All four pages of the Constitution, the Declaration, and the Bill of Rights will be returned to permanent display in the renovated Rotunda.