More than six decades after it began, World War II continues to be an abiding interest for Americans— not just those who fought it or had family members in uniform, but also archivists, historians, and journalists. Moreover, new books, popular movies, and special events of all kinds commemorate the milestones of "the war" for those born long after this central event of the twentieth century.

And with all this interest comes continued demand for information to fill in many of the missing details of World War II and the cold war that followed.

Although a huge body of information has become available, including wartime and postwar military and diplomatic records and captured records of the German Third Reich, much information held by U.S. intelligence agencies that could shed new light on events of the war and the cold war has remained classified.

For the past few years, it has been one of the special concerns of the National Archives and Records Administration (NARA) to work with other federal agencies to meet the demand for more information about Nazi war crimes and those who committed them. This has been done through NARA's chairmanship of the Nazi War Crimes and Japanese Imperial Government Records Interagency Working Group (IWG).

The IWG's mandate is simple: Declassify as much as possible the remaining classified U.S. government records about war criminals and crimes committed by the Nazis and their allies, specifically including the Japanese, during World War II.

The authority for the IWG is derived from two acts of Congress: the Nazi War Crimes Disclosure Act of 1998 and the Japanese Imperial Government Disclosure Act of 2000, which extended the life of the IWG another two years and confirmed that declassification of documents pertaining to Japanese war crimes is among IWG's responsibilities.

The IWG is made up of a group of private citizens and representatives of various government agencies. (See the list on page 211, and visit the IWG web site at www.archives.gov/iwg.)

So far, the IWG has overseen the declassification of about 2.7 million pages, mostly from the U.S. Army's Counter Intelligence Corps, the Central Intelligence Agency (and its predecessor organization, the Office of Strategic Services), the State Department, and the Federal Bureau of Investigation. An estimated three to five million more pages remain to be examined for declassification.

The actual declassification is done principally by the agencies that hold the records, except in the case of army records that have already been accessioned by NARA—for which the agency has declassification authority.

Not all classified material will be made public, because the legislation establishing the IWG in spelling out its mission also provided some exceptions. Generally, those exceptions allow material to remain classified if its release would impair U.S. national security and would compromise U.S. intelligence efforts by revealing human sources or intelligence methods. Other exceptions include material whose release would harm U.S. relations with other countries or would be a "clearly unwarranted invasion of personal privacy." Most of the records, however, are being released.

The IWG's biggest release to date was in June 2000, when it opened about 400,000 pages of classified documents from the OSS that had been previously withheld by the CIA. This release made headlines around the world because, among much new information, it provided documentation that British intelligence had intercepted and decoded German messages relating to plans to round up Italian Jews and ship them to Germany for liquidation. The information was shared with U.S. intelligence at the time, and its discovery sheds some light on the concerns of historians about what Allied governments knew about the Holocaust as it was being perpetrated. 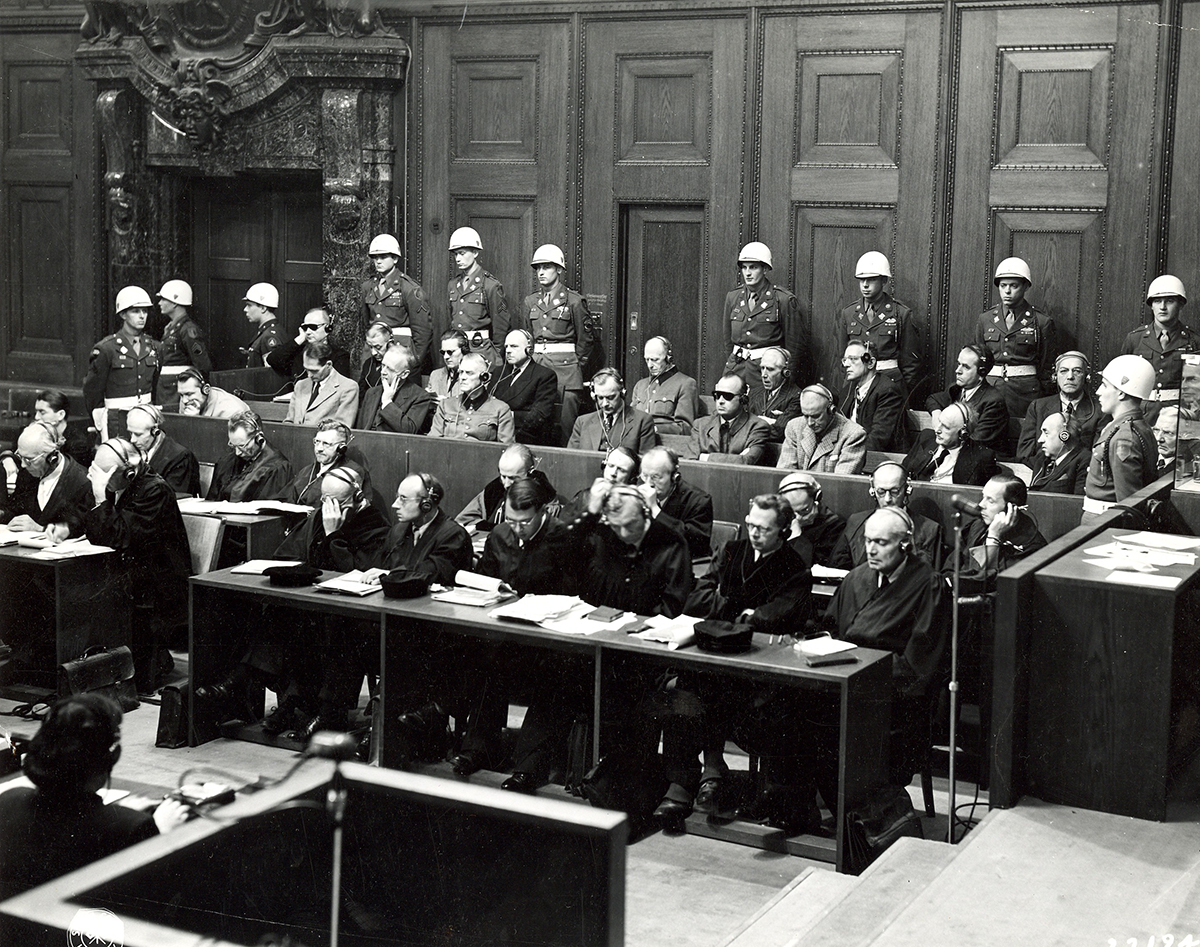 Hermann Göring, Rudolf Hess, Joachim von Ribbentrop, and other defendants sit in the courtroom of the German war crimes trials in Nuremburg, 1945.

In April of this year, IWG added to the trove of new information by releasing Central Intelligence Agency "name files" of top Nazi officials. The CIA rarely releases these "name files," and few exceptions, such as that of Lee Harvey Oswald, are made. These files, too, will fill in more details about individuals ranging from Adolf Hitler and his top aides to obscure officials of the Third Reich. Among those individuals in the "name files" are Klaus Barbie, Adolf Eichmann, Josef Mengele, Heinrich Mueller, and Kurt Waldheim.

At the same time, the IWG released files on other individuals with Nazi pasts who were used as resources by intelligence officials of the United States, Great Britain, the Soviet Union, and other nations in the post–World War II era, the cold war. These files add to the understanding of U.S. intelligence during the cold war and show how the United States used former Third Reich officials to gather information for it on the Soviet Union.

In July the IWG released additional documents that provide more information on how much American and British officials knew early in the war about Hitler's plans for the Jews. A key document that provided the clue is a translated copy of a despatch filed by a Chilean diplomat in Prague in November 1941, which discusses the Nazi plan to eradicate European Jewry. It was intercepted by British intelligence and passed on to U.S. intelligence officials, but there is no indication of how many others in the U.S. government saw the document or knew about its contents.

The Chilean's despatch said, in part: "The German triumph [in the war] will leave Europe freed of Semites. Those [Jews] who escape with their lives from this trial will certainly be deported to Siberia, where they will not have much opportunity to make use of their financial capabilities. In proportion to the U.S.A. increasing its attacks on the Reich, Germany will expedite the destruction of Semitism, as she accuses international Judaism of all the calamities which have befallen the world."

As they are declassified and released, these new records add new details to and continue to fuel the debate about how much the United States and its Western allies knew about the Holocaust at the time.

The IWG, in its third year of operation, now has new leadership. Dr. Michael Kurtz, who had been NARA chair since the beginning, stepped down early this year to focus on his work as Assistant Archivist for Records Services–Washington, D.C. He has been succeeded by Steven Garfinkel, who is director of the Information Security Oversight Office within NARA. See the list of members.

The work of the IWG is far from over, and there are millions of pages of classified material left to examine.

The legislation in the fall of 2000 extended its life until December of 2003. It also explicitly added to the list of records to be examined and declassified those related to war crimes of the Japanese Imperial Government. These records are not expected to be as voluminous as the Nazi records.

However, as always with archives, officials suspect there could be some surprises among records that have not been looked at closely since they were created. In any event, the records are surely expected to add to the knowledge and understanding of some of the darkest moments of the twentieth century.