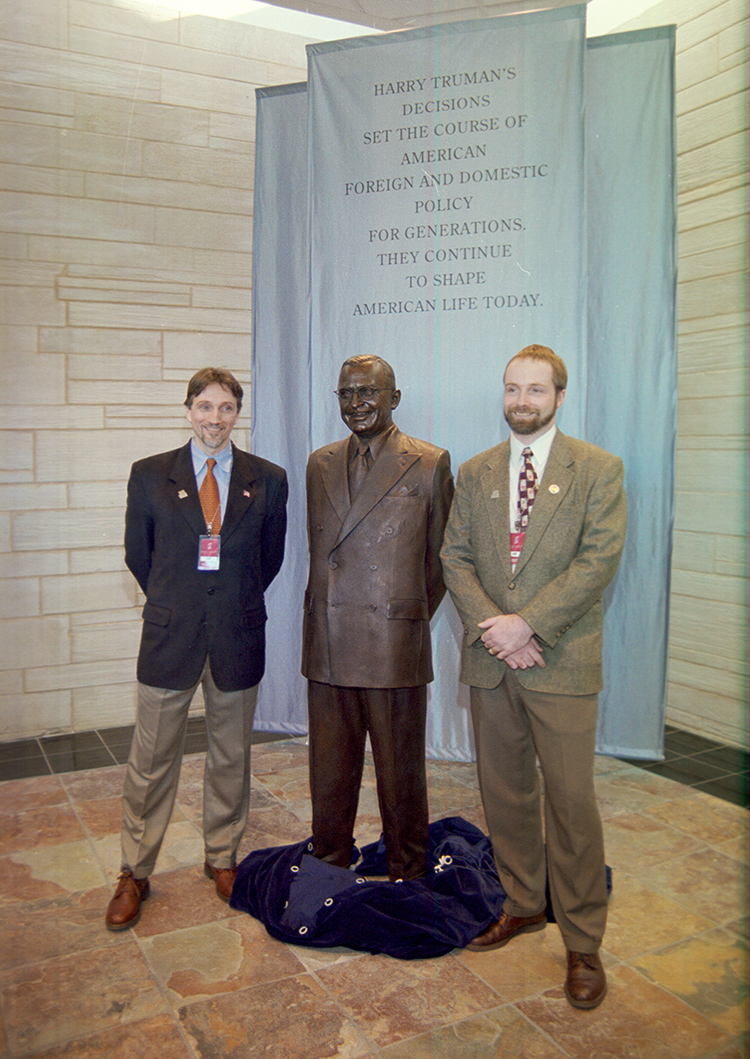 The former President, whose home was just down the street, spent a lot of time at his library in the late 1950s and 1960s nurturing his library— greeting visitors, leading tours, meeting with student groups, receiving important guests, or tending to daily business in his office. He even started the volunteers program, which now numbers 118. And it is said that if you called the library early enough in the morning, Truman himself, a noted early bird, might answer the phone.

Today, the Truman Library does not have the nation's thirty-third President. However, it can point with pride to the results of a $22.5-million renovation that not only has provided much-needed structural repairs and upgrades to the building but also expands the library's exhibit and educational space and breaks new ground in its efforts to make Truman and his times come alive for new generations of Americans.

New components to the library provide technology-rich, interactive exhibits highlighting the Truman presidency and an experienced-based program in which high school students learn how decisions were made in the Truman White House. Another exhibit, detailing Truman's life before and after his years as President, will open in 2003.

"These new features at the library help us do a much better job of recreating the Truman presidency for generations who are unfamiliar with it and to show how many of the important decisions President Truman made still guide our nation today," said Michael Devine, director of the library.

As the nation's second-oldest presidential library, the Truman Library has been for years a destination for millions of tourists, history buffs, students, and others who wanted to find out more about one of the most colorful and popular Presidents of the modern era.

After assuming the presidency in 1945 upon Franklin Roosevelt's death, Truman was elected in his own right in 1948 and served until 1953, when he retired to Independence. He died in 1972.

With most of the renovation completed, the Truman Library was re-dedicated December 9, 2001. At the ceremonies, David McCullough, author of the Pulitzer Prize - winning biography Truman, noted how Truman's rise to power and greatness often puzzled people. "People called him a simple, little man from Missouri," McCullough said. "But he wasn't simple and he wasn't little. Giants come in all sizes."

Truman's eldest grandson, Clifton Truman Daniel, also spoke, noting that his grandfather had spent a lot of time in developing the library in its early years. Now, he said, it is time to bring Truman's story to a twenty-first-century audience. "There are a whole bunch of young people and new immigrants who haven't heard of him," he said.

The eighteen-month renovation project at the library, which opened in 1957, is the most extensive renovation to date of any of the nation's ten presidential libraries, which are administered by the National Archives and Records Administration.