Construction Projects Now Under Way Will Protect Records of the Past . . . And of the Future 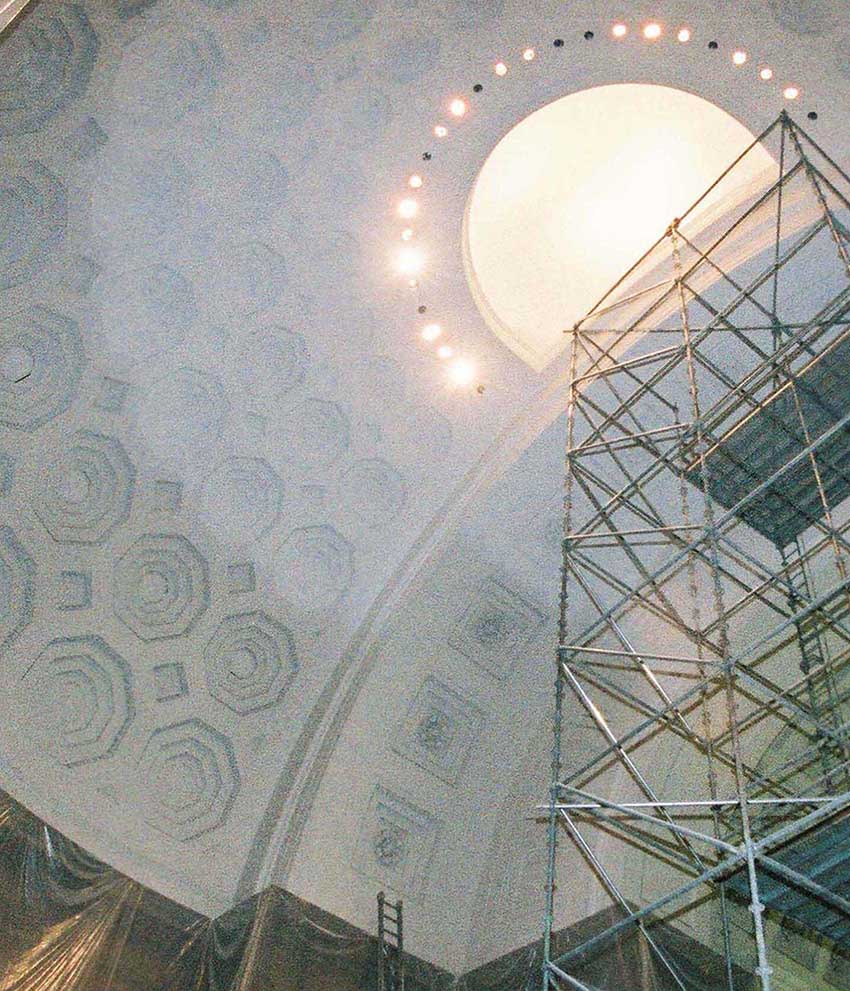 A vital part of preserving the record of our nation and providing "ready access to essential evidence," as stated in our Strategic Plan, is having modern, appropriately equipped facilities for maintaining those records and making them available to the public.

In order to fulfill this mission, the National Archives and Records Administration has construction projects under way around the country to upgrade our facilities. The improved buildings will help ensure that records in our care are maintained in proper environmental conditions to prolong their existence. And of course, our customers are best served by providing them the best possible facilities.

Our biggest construction project is the renovation of the historic National Archives Building in Washington, D.C., funded through a public-private partnership between the government and the Foundation for the National Archives. The sixty-eight-year-old building is being renewed for the twenty-first century with expanded and updated research facilities and the addition of a major new attraction—the National Archives Experience.

The Rotunda is being readied for the return in September 2003 of the Charters of Freedom—the Declaration of Independence, the Constitution, and the Bill of Rights—which are now undergoing conservation work before being placed in new state-of-the-art encasements.

Surrounding the Rotunda will be something new—the Public Vaults, a permanent, interactive exhibit that takes visitors "inside" NARA. The spine of the exhibit is the Record of America, containing dozens of original records—from George Washington's letters to Congress to the first presidential web site. The exhibit is being designed to simulate the look and feel of walking though the stacks of the Archives.

Individual vaults, drawing their themes from the Preamble to the Constitution, branch off of the Record of America. For example, in We the People, you can turn the panels to find out why NARA may have records of your family. In To Form a More Perfect Union, you can hear a congressional debate and cast your vote. In Provide for the Common Defense, you might use records to recreate a mini-documentary on D-day 1944.

And the Public Vaults are just the beginning.

We are also building a new 275-seat theater. By day, the theater will repeat a film on the relationship of records to democracy, through the stories of real people found in our holdings. By night, it will show documentary films—many from our vast film archives—and host debates on public policy. A Special Exhibition Gallery will feature document-based exhibits on timely topics or visiting exhibitions from presidential libraries and other sources. A Learning Center will help students, as well as their parents and teachers, use our rich resources either through on-site workshops or distance learning. A new Research Center will meet the needs of modern-day researchers.

The National Archives at College Park, Maryland, is being equipped with a new security-screening area and a redesigned lobby to accommodate it. This work is part of our effort nationwide to improve security for our holdings, our customers, and our staff.

Many of our presidential libraries are now involved in extensive renovation projects designed to update and expand exhibit programs, create exciting new learning centers and educational opportunities, and better care for our historical collections of presidential materials and artifacts. To accomplish these goals, we work in close partnership with each library's private foundation. Funds raised by foundations provide new exhibits and educational programming in the libraries.

At the Roosevelt Library in Hyde Park, New York, we will dedicate a new visitors' center in November that will house orientation exhibits and a welcoming film. Building the Henry A. Wallace Visitors' Center has been a three-way partnership between NARA, the Franklin and Eleanor Roosevelt Institute (FERI), and the National Park Service. Future plans include renovation of the library in partnership with FERI to create a new three-thousand-square-foot special gallery for exhibits on the Roosevelts and the Presidency and to exhibit more of the library's historical collections.

Working closely with the Gerald R. Ford Foundation, we will soon complete an expansion and renovation project at the Ford Museum in Grand Rapids, Michigan, that will add eight thousand square feet, including a new and improved temporary exhibition space, an education center, an interactive replica of the cabinet room, and expanded storage for our museum collections. The lower level of the addition will provide new office space for the museum staff.

At the Eisenhower Library in Abilene, Kansas, we have completed space for a new presidential gallery in the museum, and we have installed a new cold storage vault for the protection of historical film. The Eisenhower Foundation contributed significantly to this project by raising funds for the new gallery exhibit.

In Boston at the Kennedy Library, we recently eliminated major leakage problems in the library by replacing the front entry plaza and several adjacent roofs. We have also completed a space study that addresses many of the collections' storage problems at the library.

An expansion at the Truman Library in Independence, Missouri, was recently completed, adding new permanent and temporary exhibit galleries, rooms for the new White House Decision Center for students, a new video theater, an expanded gift shop, a model auditorium, and expanded public meeting rooms. The Harry S. Truman Library Institute raised twenty-three million dollars in support of these projects, including two million dollars from the State of Missouri, and continues to provide support and raise money for operating the White House Decision Center.

Near Atlanta, a new Southeast Regional Archives is being built next to the campus of Clayton College and State University on a site that will also be home to the new Georgia State Archives. Once completed, the Southeast Regional Archives will move from its current quarters in East Point, Georgia. Here researchers will be able to find both state and federal records of regional interest in one location.

The mortar and bricks of these projects do not just form new buildings or major improvements to current facilities; they also form part of the foundation of our democratic republic. For these buildings safeguard the records that document individual rights, ensure accountability and credibility of our national institutions, and document our national experience.

There's a lot going on at NARA facilities all across the country, and I invite you to come visit us in Washington, D.C., or at a regional archives or presidential library.