Researchers posing these questions have tapped into one of the little-known resources of the National Archives and Records Administration (NARA): ALIC, the Archives Library Information Center. ALIC exists to provide contextual information to both the archivists arranging and describing the records and the researchers using those records.

Although most researchers have done their secondary source research before they come to NARA, ALIC provides the materials to allow them to follow up on leads from the records; identify names, dates, and functions within the governmental records; and otherwise have support in furthering their research. 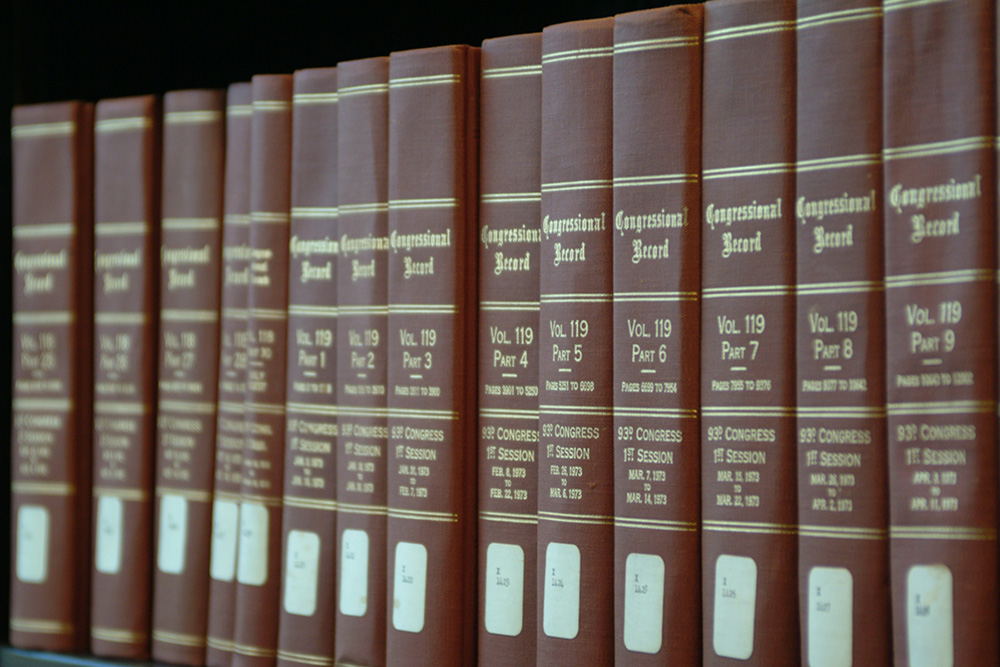 Researchers must remember, however, that ALIC does not have any records in its collections. As a library, its focus is on printed and electronic materials, many of which can be found in other libraries. The collections exist to supplement the archival records, which are the permanently valuable records of the United States government. ALIC's strengths lie in having the materials close at hand to the records, as well as in some of the special collections within the holdings.

"Librarians are more necessary today than ever before," said Lida Churchville, chief librarian, "in searching for the gems of truth throughout the world's ever-increasing mass of electronic information." She quoted Stephen Abram, the incoming president of the Canadian Library Association, who recently remarked, "Librarians are the light at the beginning of the tunnel."

These services include traditional print sources as well as electronic resources. Throughout its sixty-plus years, the library staff has collected commercially published and Government Printing Office documents with the aim of providing information about who was doing what in the government, when they were doing it, how they were doing it, and why. The print collection now numbers more than 150,000 items. The main subjects include U.S. and world history; naval, political, and military science; and archival science. ALIC has more than three hundred periodical subscriptions, including most of the state historical society journals and many other related journals and newsletters. ALIC continues to obtain materials that are or will be useful to staff and researchers as events such as the new homeland security initiatives drive collection development.

Since the opening of the National Archives at College Park in 1994, ALIC has been operating two libraries and has necessarily had to split the collections. Remaining at the Washington facility are U.S. and world history materials prior to World War I, and state, local history, and genealogical materials. All other materials, including periodicals, rare books, and government publications, are at the College Park facility.

The print holdings in the two libraries include some rare items as well as some special collections, part of which can be found in both buildings. In College Park, first and foremost is the collection of books, articles, journals, and pamphlets on archival practices throughout the country and around the world. The monographic part of the collection is searchable through ALIC's online public access catalog. The journal articles, however, are identified in an in-house database composed of more than thirty-five thousand citations. The database is updated on a daily basis as more materials arrive.

Several of the collections are named for current or former staff members and are spread among the collections in both buildings. One such group of materials is the John Taylor collection on the Office of Strategic Services (OSS) and intelligence. Taylor is a long-time NARA archivist with the modern military records unit whose specialty is OSS and intelligence records. This collection began as materials were provided to Taylor over the years and has grown to more than 650 items.

Another collection is the Mary Jane Dowd collection. The late Ms. Dowd was an archivist with NARA whose research interests covered Alexander Hamilton and the early federal period, and upon her death her family donated her collection to ALIC. Other materials include the single volumes donated in memory of staff or other loved ones. Among the newer collections to arrive are the Oliver Wendell Holmes collection (named for a one-time NARA archivist, not the Supreme Court justice), and materials from the historical collection of the United States Information Agency.

Among the rare items are several volumes donated by the United Daughters of the Confederacy containing typescript descriptions and copies of the inscriptions of Confederate monuments and grave markers in Arkansas. The volumes include black-and-white photographs tipped in among the pages. ALIC also has a set of negative photocopies of manuscript materials from St. Augustine, Florida. These records predate the U.S. government and are available for researchers. Another set of copied records are those from the Cuban archives relating to the United States; these are also negative copies, which are sometimes hard to read, but valuable to researchers interested in the topic.

ALIC has also benefited from the largesse of researchers. While many researchers donate a copy of their published work to ALIC, some of the most intriguing are the regimental histories that have been prepared. Often including personal recollections within the framework of the official records, these publications tend to be rare, self-published, and difficult to locate and obtain. ALIC continues to pursue such materials and welcomes these donations, making the materials available to staff and researchers for years to come.

ALIC also commits significant resources to purchasing subscriptions to commercial databases and making them available to all NARA staff and researchers on-site. These include ProQuest (journal articles available in full-text); ArchivesUSA (citations to archival and manuscript materials); Biography and Genealogy Master Index (citations to biographical sources); Biography Resource Center (full text of Who's Who, Contemporary Authors, and other biographical sources); and History Resource Center (historical documents and journal articles). The latest additions to these have been the genealogical sources of GaleNet's AncestryPlus and ProQuest's HeritageQuest. Both offer digitized images of the federal censuses, including new indexes, and other databases of genealogical information.

All of these electronic resources—including the National Archives Catalog and a locator for all NARA's microfilm publications—are available at all of the NARA facilities through the publicly accessible personal computers stationed in the research rooms. Although organizationally part of the office that oversees materials in the Washington, D.C., area, ALIC is committed to providing as many services to NARA staff and researchers throughout the country as possible.

ALIC provides personalized reference service to staff and researchers. The contacts can be in person or via the telephone, fax, or email. More and more of this reference work is being done in non-traditional means, primarily via email. Ten years ago ALIC answered two hundred letters a year; today the librarians answer close to three hundred emails a month. Recognizing that not everyone can have access to its physical holdings, ALIC does as much of its work as possible electronically, through its web pages, online catalog, and commercial online databases.

Reference contacts are also enhanced by ALIC's participation among the network of federal libraries. ALIC can tap into resources and refer questions to other agencies and generally rely on this network to provide the proper outlet and referral to a researcher. Many people do not know where to turn for their answer, and even if ALIC is not the correct place, the librarians work hard to refer researchers to the appropriate agency.

Whenever ALIC receives a number of questions on the same topic, such as the 2000 election, or when a need can be anticipated, such as terrorism or the anniversary of a watershed event, ALIC takes a proactive approach. Web pages, including bibliographies or links to other sites, are added to the site as necessary. The "Reference At Your Desk" site began as an attempt to weed the web and select the best and most appropriate sites for staff and researchers. ALIC staff identified relevant subject areas and continues to review and edit the pages to provide the best links on a given topic.

ALIC's resources are varied. Whether in paper, electronic, or human form, they stand ready to help researchers as they work their way through the records and information maintained by NARA.

Answers to questions at beginning of article:
John Langdon of NH
No, it was Abu Nidal
Congressman Samuel McMillan
Yes

Reference at Your Desk

Jeffery Hartley is the senior reference/systems librarian for ALIC. A graduate of Dickinson College and the University of Maryland's College of Library and Information Services, he joined the National Archives and Records Administration in 1990.