FDR, His Library, and the National Archives 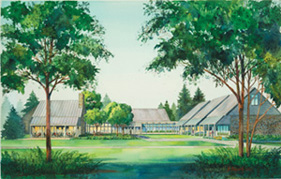 Here at the National Archives Building in Washington, D.C., we are happy to once again be welcoming visitors to see our nation's founding documents, the Declaration of Independence, the Constitution, and the Bill of Rights—known collectively as the Charters of Freedom.

But what is happening in Washington D.C.—a stronger outreach to our customers, the nation's citizens—is also happening in NARA facilities across the country, and I would like to take this opportunity to tell you of a new addition to one of the presidential libraries administered by NARA.

In November, I was pleased to cut the ribbon at the new Henry A. Wallace Visitor and Education Center at the Franklin D. Roosevelt Library and Museum in Hyde Park, New York. Wallace served as FDR's secretary of agriculture from 1933 to 1940 and vice president from 1941 to 1945.

Located on the site of the Roosevelt family estate, the FDR Library is our nation's first Presidential library, and President Roosevelt was deeply involved in its design and construction. The library and museum are located next to the Home of FDR National Historic Site, operated by the National Park Service, which includes the Roosevelt family home as well as FDR's Top Cottage. Another site, the Eleanor Roosevelt National Historic Site, includes her cottage, Val-Kill.

The Roosevelt Library is also important because it began what became a presidential library system, operated by NARA, and established the precedent for the ten presidential libraries that have followed. After it opened in 1941, FDR himself used it as a place to work when he retreated to Hyde Park, and he remains the only President to have used his presidential library while still in office.

Now the grounds of the Roosevelt library and home have received the first addition since the library was built more than sixty years ago—additions that are designed to make the library more customer-friendly so that more of its holdings are more accessible for more visitors.

Before visitors set forth to see the Roosevelt estate, they now get a thorough orientation in the visitors' center. Document and photograph-based exhibits explain the various attractions, and a new orientation video, A Rendezvous with History: The Roosevelts of Hyde Park, shows continuously in the new 140-seat theater. The library's museum store, the New Deal Store, has moved to new, expanded quarters, and there is a café there as well.

Attached to the visitors' center is a conference and education center, which includes three classrooms that can be combined into one 350-seat multipurpose room, all equipped with the latest in technological resources. This provides the library with greater space for important document-based education programs involving students and teachers. The space can also be used for conferences and community gatherings.

Now, as visitors set off on their tour of the Roosevelt estate, they are armed with a better understanding and appreciation of the importance of each attraction as it related to the Roosevelts and to American history.

The first thing visitors see as they leave the Wallace Center is a new life-size bronze sculpture of Franklin and Eleanor Roosevelt that is based on a 1933 photograph of them sitting on the south lawn of their home, overlooking the Hudson River.

In addition to the Wallace Center, parts of the original library building have also been renovated to create a new 3,000-square-foot special exhibit gallery, named for William J. vanden Heuvel, the long-time president and chairman of the Franklin and Eleanor Roosevelt Institute, which plays in important role in the activities of the library.

The first exhibit in this new space tells the story of the library itself. President Roosevelt took a keen interest in it and was actively involved in its design and construction, even as the nation struggled to climb out of the Great Depression and war clouds gathered in Europe and the Pacific in the late 1930s.

This Wallace Center is important in another respect as well. It is another example of public-private partnerships that we foster throughout NARA.

As the new facilities in Hyde Park take their place alongside those whose construction was overseen by President Roosevelt himself, it is important to note that the National Archives Building itself, which is receiving its first-ever top-to-bottom renovation, also captured FDR's attention.

Although construction on the building began before Roosevelt took office, FDR took an active interest in it. And he proposed the National Archives Act of 1934, which gave the National Archives its mission. Over the years, Roosevelt also took a keen interest in the operations of the new agency, even, at one point, the allocation of stack space. In fact, the only monument in Washington that he envisioned for himself is the modest stone that to this day stands outside the Archives he helped create.

There was a bit of archivist and historian in FDR, and it came out in his remarks when he dedicated the FDR Library in June of 1941. He called the library opening "an act of faith." He said:

Now, as we open a new era at NARA—with the return of the Charters and the launch of the National Archives Experience as our "acts of faith"—we renew our commitment to our role as steward of our nation's records and historic documents, as Franklin D. Roosevelt envisioned, and to bringing that story to our citizens.