In the historic Rotunda of the National Archives Building in Washington, where the nation's most important documents reside, new history was made on September 17, 2003, the 216th anniversary of the adoption of the Constitution.

On that day, Constitution Day, the leaders of all three branches of the federal government gathered to rededicate the renovated Rotunda and unveil the newly re-encased Declaration of Independence, Constitution, and Bill of Rights—known collectively as the Charters of Freedom.

"In this Rotunda are the most cherished material possessions of a great and good nation," said President George W. Bush. "By this rededication, we show our deep respect for the first principles of our republic, and our lasting gratitude to those first citizens of the United States of America."

The President also noted that the principles embodied in the Charters are not America's alone: "America owns the Declaration of Independence and the Constitution, but the ideals they proclaim belong to all mankind."

The next day, September 18, the Rotunda was reopened to the public. Back on permanent display were the Declaration, the Bill of Rights, and, for the first time, all four pages of the Constitution. This reopening also marked the debut of the National Archives Experience, a new multimedia interactive exhibit that will be opening in stages over the next year. And it marked the beginning of a long weekend of special activities at the Archives, only briefly interrupted by Hurricane Isabel.

The Charters were enshrined in the Rotunda in 1952, when the National Archives took custody of the Declaration and the Constitution from the Library of Congress; the Bill of Rights had been at the Archives since 1938. They were removed on July 5, 2001, for the renovation of the National Archives Building. While off display, they received expert conservation treatment in NARA's Document Conservation Lab, then were placed in new, state-of-the-art encasements. 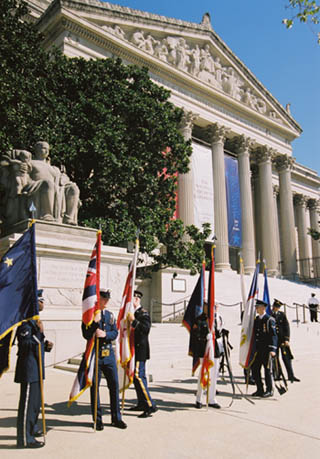 The President praised the work of the conservators. "The work of handling the fragile parchment and preparing it for the new encasements had to be difficult—and must have been pretty nerve-wracking," he said. "I don't know how you practice for a job like that. But I do know there's little margin for error."

During the rededication ceremony, President and Mrs. Bush, along with Archivist of the United States John W. Carlin, watched as members of the U.S. military carefully unveiled each of the three encased documents in the Rotunda before a gathering of about two hundred people, including leaders of Congress and the Supreme Court, governors, distinguished guests, and others.

"Every day we celebrate the freedom first declared in the Declaration of Independence," he said. "Every day our government is an example to the world of democratic Government laid out in the Constitution. And every day our people exercise the liberties set down in the Bill of Rights."

Before the President spoke, leaders of the legislative and judicial branches of the federal government offered reflections on the day and on the Charters of Freedom.

"A major reason the Constitution has kept the ship of state afloat is the existence of an independent judiciary as a co-equal branch of our federal government," said Chief Justice of the United States William Rehnquist. He added that the Constitution's creation of an independent judiciary was "probably the most significant single contribution the United States has made to the art of government."

House Speaker Dennis Hastert, a former high school teacher, said it was important to teach students about the Charters. "If we don't teach them why they need to vote, why they need to participate in our democracy, we risk losing all that we have gained in the last two hundred and sixteen years," he said.

House Democratic Leader Nancy Pelosi said the Constitution "has been a beacon of liberty throughout the world, encouraging people to fight for freedom and drawing newcomers to our shores."

House Majority Leader Tom DeLay echoed 1862 comments of President Abraham Lincoln in saying that despite the many changes in the country over two centuries, the legacy of the Charters has endured as "the last, best hope of Earth."

Senate Democratic Leader Thomas Daschle, noting that the U.S. motto is e pluribus unum (out of many, one), said "it is our shared faith in the ideals expressed in these documents that makes us one. . . . Today, on the anniversary of our Constitution, let us recommit ourselves to the noble principles that bind us together as one."

Senate Majority Leader William Frist said that in the Charters, "the Founding Fathers poured wisdom and knowledge and experience gained from centuries of progress. And from these documents our progress—and indeed the progress of all humankind—has emanated since."

Frist added: "This is the epicenter of American ideas." 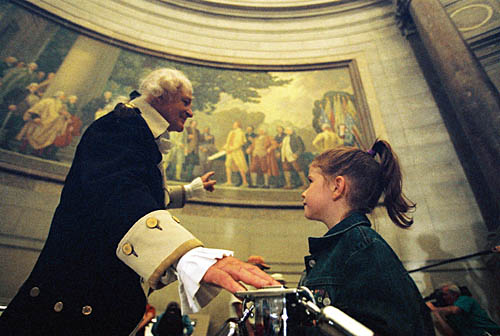 An actor portraying George Washington points out to a young visitor the restored Barry Faulkner mural The Declaration of Independence. (National Archives photo by Earl McDonald)

As the ceremony closed, Carlin reminded guests of another major NARA project. He announced The People's Vote, the second phase of the Our Documents project. This program gives Americans of all ages and educational backgrounds the opportunity to cast their vote for the ten documents they think have had the biggest impact on our country out of the one hundred "milestone documents," selected mostly from NARA holdings.

The voting, which was done in partnership with U.S. News & World Report, ended December 1, and the results were announced on Bill of Rights Day, December 15. They are available at www.usnews.com/vote. Despite the approach of Hurricane Isabel, the Rotunda reopened to the public as scheduled on September 18, although only for a few hours.

The first visitors were admitted to the building at 10 a.m. to witness Carlin cut the ribbon across the gated entrance to the Rotunda. With him were the "Time Travelers," actors who portray Benjamin Franklin, George Washington, and Thomas Jefferson.

Along with the Charters, the Rotunda features a new exhibit, "A New World is at Hand." In display cases to the left of the Charters, the exhibit includes original documents that reflect the force of the ideas that gave birth to the nation. They include the oath of secrecy signed by members of the Second Continental Congress in 1775; the engrossed Articles of Confederation from 1781; and George Washington's working copy of a draft of the Constitution.

To the right of the Charters, cases hold original documents that mark milestones in American history over the past two centuries, including the Louisiana Purchase treaty; the proclamation announcing the ratification of the Thirteenth Amendment, which outlawed slavery; and Susan B. Anthony's testimony in her trial for "illegal voting" in 1872. 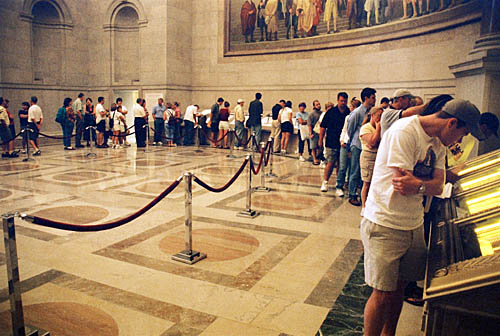 A long line of visitors looking at the Charters of Freedom was a familiar sight during the long weekend of celebratory activities. (National Archives photo by Christopher McClary)

The next day, after Hurricane Isabel had passed, the Archives opened for a weekend of activities that featured live musical performances; children's activities, including a book fair; actor portrayals of noteworthy historical figures from the eighteenth, nineteenth, and twentieth centuries; and evening sound and light shows. NARA staff also held a teacher workshop in which they showed participants how to use documents to teach American history.

The reopening launched the new National Archives Experience. The Archives Shop, located off the visitor's entrance to the Rotunda, also opened September 18. Other components of the Experience, including the William G. McGowan Theater, the Public Vaults, the Learning Center, and the Special Exhibition Gallery, will open over the next year.

Over the weekend of September 18–21, more than 5,700 people from around the country and overseas visited the National Archives to see the original documents that shaped the nation's ideals, spelled out the foundations of our democracy, and guaranteed our individual rights.

"I am pleased that the Rotunda is once again filled with visitors," said Carlin. "And I'm pleased that we have begun our roll-out of the National Archives Experience. It is an exciting time here at the Archives."

The Charters of Freedom, the Archivist added, remain the centerpiece of NARA's displays and its holdings.

"Our Declaration of Independence, our Constitution, and our Bill of Rights belong to the people," Carlin said, "and once again they are there for anyone to come in and read—read the very parchments that our Founding Fathers signed in giving birth to our democracy."