The Revolution in the South 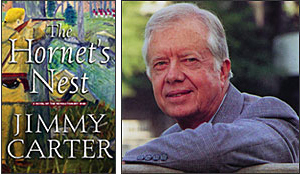 (Courtesy of Simon and Schuster)

Most Americans know very little about the Revolutionary War in the Deep South, even though much of the conflict was fought there. In his historical novel The Hornet's Nest, former President Jimmy Carter brings that time and place to life, offering a detailed and accurate account of the events and complex interrelationships that led to the war's outbreak and ultimate conclusion. The Hornet's Nest is the first work of fiction ever published by a President of the United States.

President Carter chatted with Prologue from his home in Plains, Georgia. The Jimmy Carter Library, which is part of NARA's presidential library system, is in Atlanta.

You've written numerous works of nonfiction, including memoirs and books about spirituality, conflict resolution, and the Middle East. What prompted you to write a novel—and in particular a novel about the Revolutionary War?

Having also written a book of poems, I was ready to move on to a new literary experience.

Since I was somewhat familiar with my ancestors' participation in the Revolutionary War, this was a subject that was fascinating to me. As I began to do preliminary research, I was surprised to discover how few books had been written about what was arguably our most important war, and how distorted were the few accounts. Even my fellow university professors knew very little except that some early skirmishes occurred around Boston and Canada, Paul Revere rode a horse at night, George Washington and his troops crossed the Delaware River in a storm and survived a terrible winter at Valley Forge, and Cornwallis surrendered at Yorktown.

The facts were that the conflict lasted more than eight years and was more vicious than others. And most of the defining military activity occurred in the South, from Saint Augustine through Georgia, the Carolinas, and southern Virginia.

How did the conflict reach the South?

The British sought to end a long stalemate in the North by launching their major strategic thrust into Savannah. The troops came from St. Augustine by land and from New York by sea. Once they took Savannah (the most costly of all Revolutionary battles), they moved to secure Charles Town, where almost five thousand American troops surrendered. From Charles Town, General Cornwallis launched his move northward, which was costly but with few lost battles. The heavy involvement of the French navy off the coast at Yorktown and French soldiers by land is what saved Americans from defeat.

To what does the title The Hornet's Nest refer?

The Hornet's Nest is an area of impassable creeks, swamps, and hills in Northeast Georgia that was used as a refuge by the small group of revolutionaries even during the times when British troops occupied all other parts of the Deep South.

Why is the history of the Revolutionary War in the South so little known?

Even in Southern schools, almost all textbooks present superficial accounts of the Revolution, perhaps because most of the defining historians were from the northeastern states.

We have a tendency to exalt a few dramatic heroes and to conceal the sharp but subtle divisions that shaped the conflicting convictions of American Whigs and Tories, the failure of George Washington ever to win a definitive battle, and the fact that it was the French military forces at sea and on land that made it possible for Americans to prevail over the British. Also, it is uncomfortable to acknowledge that there were villains and heroes on both sides.

What aspects of the Revolutionary War do you find most interesting?

This was the only American war in which there was no geographical division between the military forces. The Mason-Dixon line was the general separation between Yankees and Confederates during the Civil War, but during the Revolution the antagonists habitually came from within families.

All "Americans" were actually British citizens, who had taken oaths before God to be loyal to the king. There had to be strong motivations for them to violate these lifetime commitments, especially for those who were blessed with a benevolent and honest royal governor. One son would become convinced to take up arms against the crown and would soon be fighting against his own father and brothers. At King's Mountain, North Carolina, for instance, all Redcoats except the commanding officer were actually American settlers, fighting against their kinsmen and neighbors.

Hatred became intense, resulting in "no quarter" being granted at the conclusion of battles, with the summary execution of all the defeated enemy who surrendered or were severely wounded.

The novel is brimming with details about everything from colonial politics and military engagements to how people dressed, lived, and behaved in environments ranging from city to frontier farm. How did you approach the research for the novel?

I studied more than fifty books about lifestyles, agricultural practices, handicrafts, the life of Indians, biographies of privates and generals who served on both sides, and the intricate details of crucial battles. The book is historically accurate, with a mixture of actual and fictional characters that bring it to life.

What were some of the most surprising things you learned while doing the research for the novel?

I was surprised at how long the conflict lasted, the degree of personal hatred that evolved, the preponderance of substantive battles that occurred in the South, the strong role of irregular troops, and the direct effect of the worldwide conflict among Britain, France, and Spain on the outcome of our Revolution. The importance of slaves and Native Americans was also a revelation to me.

You've mentioned that some of the characters in the novel are based on your own ancestors. Which characters? What aspects of your ancestors' experience are reflected in the novel?

My dominant fictional character was Ethan Pratt, whose life closely parallels those of my ancestors who first immigrated to New Jersey and Pennsylvania, moved to North Carolina, and then came down to Georgia with a group of Quakers. They lived in the village of Wrightsborough and shared many other actual experiences.

It is not clear to what extent my ancestors participated in the Revolutionary War. However, one of them received a small pension for life, and our family also earned special rights to own large holdings of land as rewards for Revolutionary War service.

What did you enjoy most about writing a novel? What was the biggest challenge?

I really enjoyed devising the plot, evolving characters, and observing how surprisingly they changed as they interrelated with each other and with historical events.

For example, Ethan Pratt started out as something of a pacifist who wanted only to be left alone to operate his farm and take care of his family. But he changed into a fierce fighter who abandoned his farm and separated from his wife. I never expected him to be disloyal to her. Thomas Brown began as a timid and fearful tenderfoot, but after being tarred and feathered he experienced an epiphany and evolved into one of the most ferocious and successful guerrilla fighters.

It was a real challenge to let the characters evolve without deviating from the historical accuracy of my description of the Revolutionary War.

What do you hope readers bring away from The Hornet's Nest?

My hope is that readers will find The Hornet's Nest to be enjoyable, will learn more about this crucial period in our nation's history, and will realize that the causes and ultimate results of conflicts are often shaped by relatively minor factors, avoidable mistakes of leaders, and subtle nuances of fact and opinion. In almost every case, there is a peaceful alternative to war.

Obviously, it was time for us to act with the Declaration of Independence, but even at that time a wise British parliament could have acted to prevent Americans from pursuing the military option.

Will your background papers for this book be in the Carter Library?

The background papers and early versions of all my books will be in the Carter Library.