A History of the U.S. Railway Mail Service, Part 2 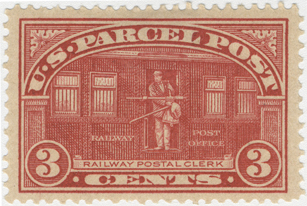 In the aftermath of the Lloyd-LaFollette Act, unionism in the Railway Mail Service was fostered by four organizations that were national in scope and officially recognized by the railway mail as craft-service organizations.

The final organization, the National Alliance of Postal Employees, was started in 1913 by Negro railway postal clerks who were denied membership in the Railway Mail Association because of race. They organized primarily to protect themselves against instances of alleged racial discrimination in the appointment, promotion, and removal process. The National Alliance of Postal Employees was also instrumental in securing an executive order that eliminated the photograph as a means of identification in appointments and amending civil service rule # 4 to add the word "race" to the regulation that required appointing officers to exercise discretion solely on the basis of merit—without regard to "political or religious affiliation," "marital status," or "race."

The year 1912 also witnessed the Post Office Department's first attempt to standardize the construction of railway postal cars. Three basic car lengths were agreed upon—15-foot, 30-foot, and 60-foot cars—with standard features including letter cases and racks for pouches. Standardization made cars interchangeable so they might be used on any trip assignment.

When the Parcel Post Act became effective January 1, 1913, the Railway Mail Service initiated a new class of service that handled and transported packages. The act increased the weight limit for a single package, reduced postage rates, and adapted a zone system with charges based on the length of the haul. The growth and increase sparked by parcel post business forced the Railway Mail Service to initiate Terminal Post Offices, which were essentially large rooms located in railroad stations in which mail, particularly parcel post and heavy bulk matter was distributed. Eventually, the service moved parcel post mail between large commercial cities in carloads via passenger trains.

On July 28, 1916, Congress passed an act that brought a solution to the long-festering problem of compensating the railroads for carrying the mail. Under the old system, compensation was based on weight, a plan that had proved unsatisfactory. Under the new plan, compensation was based on the amount of space required in cars for handling the mail. Railroads made nationwide tests every two years to determine how many sacks of mail could be placed in three linear feet of car space.

As 1920 drew to a close, additional railway post office service was established and reinforced on several important name trains that provided overnight and faster service to major mail markets throughout the country. The "Federal Express" from Boston to New York made connections that moved mail from New England to cities in the south and west. From east to west between New York and Chicago and New York and St. Louis, crack trains of the Pennsylvania Railroad, the "Broadway Limited" and the "St. Louisian," carried railway post office cars that targeted the distribution of letter mail exclusively.

The years between 1920 and 1946 for the Railway Mail Service were characterized by steady measured growth that manifested itself in increases in the number of employees, growth of infrastructure, and slow but sustained efforts to improve working conditions. From July 1, 1920, to June 30, 1946, the number of railway mail clerks rose from 20, 407 to 22, 546, and their salaries increased from $2,067 a year to $3,550.

For the postmaster general and management, these years were a period of transition in which autocratic approaches toward supervising and working with people slowly changed. Confronted with adjusting to the aftermath of World War I, the Great Depression, the onset of unionism, and the tremendous demands of World War II, postal management eventually realized that their greatest strength was embodied in the average postal employee, who wanted a more involved and participatory role in improving the workplace and the lot of the employee.

During the 1920–1946 period, the Railway Mail Service adapted to increasing demands upon it by implementing a number of improvements. The service added RPO trains to handle the distribution of letter mail to cities, resulting in earlier delivery to customers. The placement of star route service (mail delivery routes between postal stations, given on contract to a private carrier) under the supervision of the Railway Mail Service resulted in saving money and improving service. 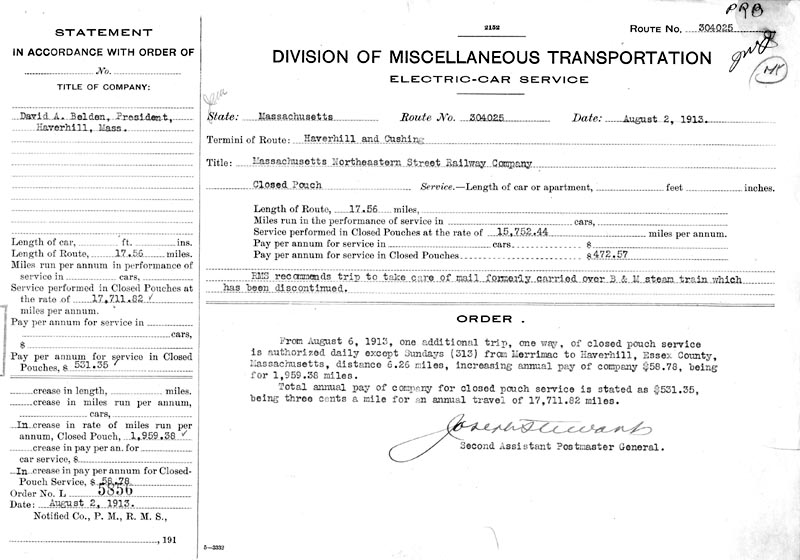 Enlarge
The Railway Mail Service continually evaluated and changed routes. This order of August 12, 1913, authorized an additional trip from Merrimac to Haverhill, Massachusetts. (Records of the Post Office Department, RG 28)

Other significant improvements included negotiations with railroad carriers concerning the establishment of through train connections that expedited the dispatch of mails nationwide; the use of terminal railway post offices in major cities such as Los Angeles and St. Louis; the establishment of streamlined train service on some of the larger railroad lines; and the shortening of schedules on other lines. The highway post office service began on February 10, 1941, in specially constructed motor vehicles with postal clerks to augment and support the Railway Mail Service.

The Railway Mail Service entered its final years between 1955 and 1977, when the Post Office Department shifted away from reliance on railroads as the key element in its mail distribution system. Instead, the department encouraged the use of different modes, such as trucks, trailers, airplanes, and highway post office vans. As far back as 1951, the department, confronted with additional anticipated rail cost increases, announced that its long-term goal was to make the fullest use of every form of transportation to move the mails.

Emphasis was placed on obtaining the fullest coordination of rail, air, and highway service; the elimination of excessive, duplicative, or wasteful transportation service; and better scheduling of mail routings over various types of carriers.

This three-pronged approach to mail delivery initiated an internal struggle and competition among the various elements that went on for years and focused on the lucrative prize of government mail contract subsidies. The railroads touted their investment in moving the mails, which they said totaled $950,000,000 in facilities for handling and transporting the mail. Assets included 2,600 RPO cars and 11,500 baggage express and freight cars, along with terminal facilities, tracks, and platforms. The railroads also argued that their capabilities were a known and proven entity.

The Post Office Department required railroads not only to carry the mail, but build, operate, and maintain all RPO cars to rigid Post Office specifications. In addition, the railroads had to provide all manpower or mechanical equipment necessary to handle the mail between Post Office vehicles and the trains. Moreover, they were required to absorb without special remuneration all charges associated with placing RPO cars at stations in advance of the train departure time to suit the Post Office's convenience.

Truck mail contractors made the case that they could provide the Post Office with quick turnaround service, primarily for bulk mail on short-haul inner city routes. In most instances, the proposed truck contracts were based on mileage to be traveled and the cubic capacity of the truck to be used. Most contractors looked to the Post Office Department to pay for or provide the trucking contractors with terminal facilities.

Air mail contractors heralded their ability to move the mail with speed and serve communities where surface mail had long been impeded. But many railroad and trucking competitors viewed them as having been given an unfair advantage in the amount of money they were paid for their services, which on many occasions were below standards in terms of on-time capability and responsiveness to the needs of the paying postal public.

It is easy to understand why the railroads viewed the competition as taking place on an unfair playing field.

Multiple factors contributed to the demise of the Railway Mail Service, including political and legislative decisions, the decline of rail passenger service, the subsequent loss of mail contracts, the growth of the interstate highway system, automation, and even increased ownership of private automobiles.

However, during its lifetime, the Railway Mail Service bound the nation together by rail and precipitated the growth of commerce through the speed and dependability of its service. Business and commercial activity were pushed along in an environment where fast service, reliability, and a can-do attitude prevailed. The Railway Mail Service had all of these attributes, combined with dedicated people, with a tremendous work ethic and esprit de corps that gave America a mail service that was the envy of the world.

A Typical Day as Train No. 8 Speeds Eastward

Fred J. Romanski is an archivist with the Civilian Records Branch, Textual Archives Services Division at the National Archives and Records Administration, College Park, MD. He specializes in law enforcement records of the Department of Justice and has an interest in U.S. railroad history. The writer's father is a retired railway mail clerk.

The writer would like to thank the following NARA colleagues and family for their advice and encouragement in the preparation of this article: Aloha South, William Creech, Ann Cummings, Nick Natanson, Benjamin Guterman, Mary Ryan, James Worsham, Frederick and Mildred Romanski, Sr., and Deloris Romanski.

This article is based on Records of the Post Office Department, Record Group 28, at the National Archives, Washington, D.C., especially these records in the series "Historical and Reference Materials of the Railway Mail Service," 1893–1968: