Getting the Message Out

The images and the messages on these government-produced posters, by some of the nation' s most famous artists, are as powerful today as they were 60 years ago.

There is Norman Rockwell's unequaled Four Freedoms—a series of paintings depicting the four freedoms that Franklin D. Roosevelt outlined as our reasons for supporting the Allied cause in World War II: freedom of speech, freedom of worship, freedom from want, and freedom from fear.

J. Howard Miller's famous We Can Do It poster, sometimes known as "Rosie the Riveter," provided the message that even with so many men in uniform, America's plants and factories would keep on producing war materials, with women filling many of those vital jobs.

Thomas Hart Benton's The Sowers depicts grotesque images of German soldiers sowing skulls as seeds in a barren field, telling Americans that the German war machine was sowing death in every country they conquered. And Ben Shahn created a poster with the message: We French workers warn you . . . defeat means slavery, starvation, death. 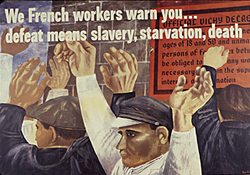 Ben Shahn's poster of French workers urged Americans to keep up the fight against tyranny. (44-PA-246)

These were just a few of the thousands of posters produced and distributed by the Office of War Information (OWI) during World War II to persuade the American people to support the war effort, to conserve the nation's vital resources, to buy saving bonds, and to not reveal possible national secrets.

To get these messages out, however, the federal government turned not to its own employees or to its military. The government mobilized the Boy Scouts of America.

The massive distribution of posters across the United States during World War II was a challenge. The OWI realized that posters had to be placed in street-level windows of every store, office, restaurant, and "service establishment of every kind" in the United States in order to reach the greatest number of people.

The President had cause for concern. When conflicting reports about the loss of naval vessels and the number of lives lost at Pearl Harbor surfaced, the American public began to doubt the official reports from the U.S. Government. To reestablish the trust of the people, President Roosevelt created the OWI and directed it to develop information programs to foster an informed and intelligent understanding, at home and abroad, of the status and progress of the war effort and of the government's war policies, activities, and aims.

OWI's goal was ambitious: to place posters in every city and town across the United States. The agency's plan called for an ongoing system of distribution; posters would be exchanged for new ones every two weeks. To accomplish its goal, the OWI formed a National Retail Committee, with local chapters in cities and towns across the United States. Each local committee would establish the necessary distribution outlets. For the plan to work, enthusiastic involvement of citizens was crucial. Each committee solicited the help of local store owners, executives of the Boy Scouts of America, and whenever possible a member of the local Victory Display Committee.

Collectively these local groups had some impact on the subject matter of the posters they would receive. The National Retail Committee sent local committees and the Boy Scouts sketches for their approval.

Women were essential to the war effort as workers and consumers. When the OWI decided to design a series of posters on how to save the fat in food, it targeted its poster campaign to women, especially female factory workers, nurses, and homemakers—all of whom were rationing food. OWI found a willing advocate for this poster's distribution at a national publication. Mrs. Louise Sloane, promotion director of Woman's Day magazine, coordinated the "Join Up" campaign by mailing posters to the YWCA, the New York Federation of Women's Clubs, the American Red Cross, and the American Legion Auxiliary. Owners of beauty parlors were also encouraged to display the posters, especially those relating to rumors, rationing, and the recruitment of nurses.

The OAAA organized an Outdoor Advertising Advising Committee, which encouraged members to be responsible for the distribution of 250,000 one-sheet posters a month. The committee gave outdoor advertising businesses exact directions on how to display the posters. Each outdoor billboard held 24 different sheets pasted together to form a single image. The OAAA decided to place the one-sheet OWI poster, which measured 1/24 of the total area of all the combined sheets, in the lower right-hand corner of each billboard. The larger picture was therefore unbroken save for where the OWI poster was prominently displayed.

Getting the Message Out, Part 2