Getting the Message Out 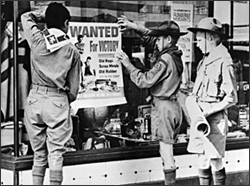 The Boy Scouts distributed this poster urging people to recycle scraps of metal, rubber, and rags to be used in military supplies. (National Scouting Museum)

The Boy Scouts of America was the main workforce for OWI's poster distribution system. Thousands of young men were responsible for the delivery of OWI's posters to shops all across the United States.

Founded in the United States in 1910, the Boy Scouts of America was a well-established organization when World War II began. In 1942, at the start of the OWI's ambitious poster distribution program, Edward Dodd, chief of the Division of Production and Distribution at OWI, asked the scouts to help: "Officials in Washington do not know of any other way by which they can meet this emergency except through the help of the Boy Scouts of America."

As soon as war was declared, the leaders of the Boy Scouts realized that they could be of service. Walter W. Head, president of the Boy Scouts of America, and James E. West, Chief Scout Executive, telegraphed President Roosevelt on December 8, 1941, the day Congress declared war, offering "the full and whole-hearted co-operation of our organization."

The scouts were a popular choice for jobs that needed to be done. In 1941 some scouts already operated a messenger service for the Office of Civilian Defense (OCD), collected aluminum and books, planted trees, and, possibly, did every job some local official could imagine. Boy Scouts were a natural choice for work at the grassroots level in the United States. In 1942, there were 1,600,000 members, and almost every village, town, and city had a scout troop. They also had complete knowledge of their neighborhoods. In addition, being clean-cut children and young adults, they could approach individual homes and businesses and be readily welcomed. The OWI's Dodd thought it would "be a great mistake not to take advantage of the eagerness of this organization to serve in this capacity."

The scouts received their first assignment in October 1942, when they distributed a poster that was based on the theme of Columbus Day. The poster, which was produced by the Office of Inter-American Affairs, commemorated the 450th anniversary of Columbus's first voyage. The artist was Howard Chandler Christy, who had painted many of the posters produced during World War I. Even on their first assignment, the Boy Scouts proved that they could distribute the posters with great speed. With only 24 hours' notice, the Boy Scouts of America was able to enlist the help of 544 of its local council offices. Thus the scouts proved they could deliver posters efficiently within a short amount of time.

In every community of more than 2,500 people, the scouts would distribute posters to stores located on the street level every two weeks. Approximately 2,300 communities participated in the program. The OWI shipped posters to a central distributing outlet in a community, such as a large department store. The Boy Scouts then would pick up their posters and distribute them to the smaller stores. Each adult scout leader in his community was responsible for making sure the scouts distributed the posters correctly.

The Boy Scouts of America wanted to be officially and formally recognized by President Roosevelt as America's main distributor of government information. On February 16, 1943, President Roosevelt signed a letter asking the scouts "to take an important commission as Government Dispatch Bearers for the Office of War Information." The Boy Scouts of America would become the "Official Dispatch Bearers" for the OWI; each scout would receive "a certificate commission for him to carry to the people of the community vital information prepared by the Government." Through this program, the federal government kept 1,600,000 young people working to spread its messages to civilians all across the country. 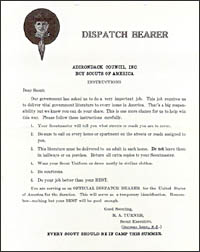 The Boy Scouts Adirondack Council of New York issued instructions to their scouts concerning their responsibilities as "Official Dispatch Bearers." (Records of the Office of War Information, RG 208) [larger image]

Because Boy Scouts could not deliver posters to bars and taverns, the OWI turned to other groups to distribute "Don't Spread Rumors" posters in places where liquor might encourage loose talk. The National Conference of State Liquor Administrators reached out to bars and taverns. Baltimore's liquor licensing commissioner, Mr. C. Delano Ames, persuaded more than 2,800 liquor licensees to put the Don't Talk. The Enemy Is Listening poster in their establishments. In Baltimore and Providence, Rhode Island, the police departments delivered the posters. Later, brewers and distilleries distributed the posters through their salesmen and delivery trucks. Seagrams was one of the first distillers to distribute posters warning against loose talk. In addition, they also distributed table tents and menus with warnings against loose talk and other security themes. DunLany was so impressed that he wrote, "we would like to say to all distillers using similar point-of-sale material . . . Go thou and do likewise."

The OWI also ran into difficulty over gas rationing. The Boy Scouts of America wanted adults working with the scouts to distribute posters to be eligible for supplemental rations. On August 25, Richard C. Harrison, chief of the Gasoline Branch of the Office of Price Administration (OPA), denied the Boy Scouts' request. Harrison acknowledged that "distribution of Government posters is undoubtedly highly useful to the OWI but that this work is not so important as to justify a grant of preferred mileage." On September 20, 1943, Elkert K. Fretwell, chief Boy Scout executive, again asked OWI for extra gasoline for his leaders. Fretwell remarked, "Right or wrong, they have come to expect OWI to help them in this particular direction."

The Boy Scouts were not to be put off so easily and claimed that the OWI had offered them gasoline on five occasions in the past and then had not followed through on its promises. In a letter to Harrison, the Boy Scouts stated that their "only hope is to go to the highest possible authority and try to influence an authoritative voice to direct the rationing officials."

On December 6, 1943, the leaders of the Boy Scouts warned that if "professional scouters did not receive additional gasoline rations . . . our OWI Dispatch Bearer program . . . would be endangered." DunLany concluded the matter by declaring: "In order to make the policy of this office clear . . . this office [OWI] is not going to make further overtures to the OPA for additional gasoline rations."

Tension between leaders of the OWI and the Boy Scouts increased for other reasons. When DunLany traveled Fifth Avenue in New York from 34th to 57th Street on January 19, 1944, he wrote that he had found "NOT ONE SINGLE POSTER. . . . [A]ny distribution system that fails completely to achieve even a token showing on the nation's number one thoroughfare must have something very wrong with it." But perhaps there was more to this story. William H. Howard, executive vice president of R.H. Macy and Company, Inc., replied to DunLany's criticism:

You should spend a little more time acquainting yourself with the procedures set up for the distribution of OWI posters before . . . implicat[ing] their distribution system has something very wrong. . . . In your files you will discover that the Boy Scouts undertook to break a very embarrassing log jam for OWI who was finding it impossible to get its posters distributed to retail stores at all.

In fact, if OWI had shown even a fraction of the organizational ability, efficiency, and eagerness to do the job that the Boy Scouts of America had shown from the day they undertook their assignment, the problem would have been satisfactorily handled much earlier.

By 1944, however, perhaps DunLany's criticism of the BSA was justified. In fact, the secretary of the treasury, traveling on the Fourth War Loan Bond tour, reported that he and his entourage did not see one of the war loan posters the scouts were responsible for in the cities of Cleveland, Indianapolis, and Bridgeport. OWI media analyst David Martin felt that the Treasury Department would not use the Boy Scouts of America for further bond drives.

There may in fact be a reason why some posters might not have been hung. At one time, for example, members of the Business Men's War Committee of Peckville, Pennsylvania, complained that the larger chains received posters before they did. Some posters were reportedly too large for some of the windows in retail stores. For example, Norman's Rockwell's Four Freedoms posters measured 30" x 56". In addition the OWI was so efficient at churning out new posters every two weeks and grocers were receiving so many posters, that they had no room for their own advertising.

The Office of War Information was no longer necessary when World War II came to a close. The agency was officially disbanded by President Truman in 1945. With its closing, the distribution of posters across the United States also came to an end. In all, thousands of posters had been distributed. While it might be impossible to measure the impact that the OWI's message had on the millions of people who saw the posters, one could argue that the process of their distribution had mobilized an army of citizens at home. The individual scouts of the Boy Scouts America must be given much of the credit of distributing posters.

The information for this article was taken primarily from the following materials at the National Archives at College Park, Maryland: Record Group 208, Records of the Office of War Information, Records of the Bureau of Graphics, Entry 236, General Records of the Chief, 1942–45, Folder Boy Scouts; and Entry 238, Letters Sent, 1943–44. Reference has also been made to Allen M. Winkler, The Politics of Propaganda: the Office of War Information, 1942–1945 (New Haven, CT: Yale University Press, 1978), and to John Hope Franklin, From Slavery to Freedom: A History of Negro Americans (New York: Alfred A. Knopf, 1980.)

Getting the Message Out, Part 1