Pulitzer Prize—winning author David McCullough spoke to a capacity audience at the William G. McGowan Theater in 2005 about his new book, 1776. (Photo by Darryl Herring)

As visitors enter the National Archives Building along Constitution Avenue in Washington, D.C., they are encouraged to make their first stop a 1930s-style theater that recalls the grandeur of classic movie houses as well as the architecture of the building itself.

It is here, in the William G. McGowan Theater, that they can see one of two films that introduce them to the National Archives and Records Administration (NARA) and its role as the nation's recordkeeper.

Emerging from the theater, however, the average daytime tourist has only seen the tip of the iceberg.

The theater has become the premier showcase in Washington for the National Archives' vast holdings of historical films that help tell America's story and for new documentaries that draw on those holdings, such as those nominated each year for Oscars.

In addition, the theater has become an important venue for lectures, symposia, and forums that have featured Supreme Court justices, noted authors, and leading public figures in and out of government for discussions of history and various public policy issues.

Allen Weinstein, a historian who became Archivist of the United States in early 2005, was a participant in National Archives programs long before taking office, onstage in an old fifth-floor auditorium. Now, as Archivist, he has taken full advantage of the high-tech platform of the new McGowan Theater, creating and hosting the "American Conversations" series begun late last year.

"These conversations with thoughtful Americans across a range of experiences reflect my stress on the importance of civil as well as civic dialogue," Weinstein said. "Each participant has some link to records in the National Archives, and each plays a meaningful role in our country's ongoing public life."

The first four guests in "American Conversations" were author and scholar Lynne Cheney, wife of the Vice President of the United States; Lonnie Bunch, founding director of the new National Museum of African American History and Culture in Washington; political analyst Norman Ornstein, resident scholar at the American Enterprise Institute; and filmmaker Ken Burns. These programs have not only enriched the audiences inside the theater, but the high profile events have been carried to a national audience via C-SPAN.

The McGowan Theater, designed by architect Warren Cox and opened in September 2004, is one of the major elements of the National Archives Experience—a set of seven interconnected components that provide a variety of ways of exploring America's records and uncovering the stories they contain.

As the theater was conceptualized, NARA received advice from the late Charles Guggenheim, the Oscar-winning documentary filmmaker and a former president of the Foundation, regarding projection equipment and the movable screen that is a feature of the theater. He died in 2002.

Today, the 290-seat theater is equipped with a state-of-the-art projection system that has the capability to present 16mm and 35mm motion picture film in a variety of image widths and audio formats. Lectures, conferences, and symposia are supported by a versatile public address audio system. The theater is also equipped with an assistive listening system for the hearing-impaired.

In addition to its many special programs, the theater has a daily role to play for the hundreds of thousands of visitors who come to the National Archives to view the Charters of Freedom and other records that contain the story of America.

"The McGowan Theater is not just a new venue, it marks a new approach to programming," said Maria Carosa Stanwich, who as operations and public programs manager has responsibility for the film and lecture programs. "We are now concentrating our energies on annual series like 'American Conversations' and monthly themes like the 'Road to Freedom' program."

The "Road to Freedom," which ran in early 2006, combined exhibit, film, and lecture programs to offer a portrait of the civil rights struggle from Emancipation through the 1950s. A celebration of Benjamin Franklin's 300th birthday in late February 2006 followed the same pattern, this time adding a family day with great activities for children as well as lectures, films, and panel discussions about the most prominent American of his time.

Today, the McGowan Theater boasts a full schedule of some of the 360,000 films from the vaults of the Archives as well as special showings of new documentaries that draw on these holdings, including those nominated for Oscars.

Under these auspices, the theater has shown a wide variety of films, including a series that chronicled the nation's response to challenges of the 20th century as seen through the eyes of a camera. During the opening month, these included such noted films as The Plow That Broke the Plains (1936), The River (1937), Prelude to War (1942), Answer to Stalin (1948), The Road to the Wall (1962), The March (1963), and Nine from Little Rock (1964).

For two years, the McGowan Theater has hosted one of two East Coast screenings of the annual Academy Award nominees for documentary feature, documentary short subject, live action short film, and animated short film. This was done in a special partnership with the Academy.

Two other programs were hosted in partnership with the Academy. One was a celebration of the 100th birthday of famed director and World War II veteran George Stevens, during which four of his feature films as well as documentaries on his life and work were shown. And another, "Oscar's Docs," showcased the Oscar-winning documentaries from 1941 to 1946, the first six years that awards were given for documentaries; it was jointly sponsored by the Academy, the Foundation, and the Guggenheim Center.

The McGowan Theater also offered a special showing of the movie National Treasure, from Walt Disney Pictures, which brought more attention to the National Archives. The reproduction of the Rotunda, complete with copies of the Charters of Freedom, was amazingly accurate, while the plot and search for a treasure map on the back of the Declaration of Independence made for a fun fictional adventure.

In conjunction with the Foundation, the National Archives has also partnered with the Guggenheim Center to advance the cause of documentary films for which Charles Guggenheim was famous.

As part of the 2005 Environmental Film Festival in the Nation's Capital, several of Guggenheim's films on national park sites were shown: Monument to the Dream (1964), Island of Hope, Island of Tears (1989), and A Place in the Land (1998).

In April 2005, filmmakers Dave Steinke and Steve Dunsky were on hand to introduce and discuss their 2004 feature documentary The Greatest Good: A Forest Service Centennial Film. The filmmakers researched hundreds of hours of NARA archival film.

To mark the opening of the inaugural exhibit in the Lawrence F. O'Brien Gallery, "Americans in Paris," the theater screened a newly restored print of the classic 1951 musical starring Gene Kelly, An American in Paris.

In conjunction with the Smithsonian exhibit, "Close Up in Black: African American Film Posters," the National Archives hosted screenings of The Negro Soldier (1944), Hallelujah (1929), and Carmen Jones (1954).

In January 2006 the Guggenheim Center and the National Archives Experience presented a series of films and programs titled "The Road to Freedom." The events were to mark the completion of the first phase of the microfilming and indexing of the records of the Freedmen's Bureau.

In addition to serving as a venue for documentary films, the McGowan Theater also hosts discussions and lectures by noted figures in and out of government, presented by the National Archives Experience.

Last year, in conjunction with the National Constitution Center and the Aspen Institute, the Archives hosted a "Constitutional Conversation" with three Supreme Court justices, Sandra Day O'Connor, Antonin Scalia, and Stephen Breyer. It was moderated by Tim Russert of NBC News.

Pulitzer Prize–winning historian David McCullough spoke to a summer audience about his new book, 1776, which chronicles in human terms the journey of George Washington and his troops in that pivotal year. News analyst and political commentator Cokie Roberts discussed her book, Founding Mothers, which looked at the personalities of the women who were the behind-the-scenes influences to some of the most powerful men in U.S. history.

Historian Michael Beschloss moderated a discussion with two leaders from the House of Representatives—Republican whip Roy Blunt of Missouri and Democratic whip Steny Hoyer of Maryland—on the impact of technology on constitutional principles. It was the annual McGowan Forum on Communications and Technology.

Author Adam Gopnik discussed the new anthology Americans in Paris, a volume he edited that is devoted to the writing of Americans who influenced and were influenced by French politics and society.

The McGowan Theater also hosted National Public Radio's Justice Talking debate on "Free Speech in the Digital Age." The program was simultaneously broadcast live via satellite and as a webcast to an audience comprised entirely of high school and middle school students. 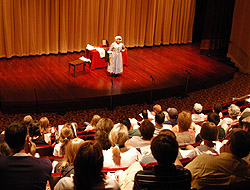 One of the many Fourth of July programs was presented to large audiences in the McGowan Theater in 2005. (Darryl Herring photo)

The McGowan Theater is also used by the National Archives for its own programs.

Last year, as the agency observed the 20th anniversary of its status as an independent agency, the McGowan Theater was the site of a daylong program devoted to discussions of NARA's independence and its future.

The theater is also used for professional purposes, such as the agency's annual preservation conference and a forum on the role of the presidential libraries, which are part of NARA.

During the McGowan Theater's first year, NARA inaugurated a series of programs specifically targeted to families, all of which involve theater in some way. They included the Seuss and Sousa Family Weekend, the Real National Treasures Family Weekend, and Declaration Days, the annual Fourth of July observance at the Archives.

In October 2005, NARA sponsored a family event called "Coming to America," featuring activity stations throughout the building where children and their families could trace their roots to America using NARA records.

In just a year and a half, the McGowan Theater has established itself as an important part of not only the National Archives but also as an integral part of the cultural fabric of the Nation's Capital, serving as an outlet for documentary films past and present and thoughtful discussions of history and current public policy.

To see's what playing now in the McGowan Theater, check the Calendar of Events for Washington, DC.