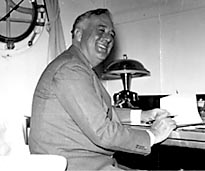 Franklin Delano Roosevelt was known by many names, some flattering, some not—from the reverential "Mr. Roosevelt" to the antagonistic "That man in the White House." To most, he was simply FDR.

When he died in April 1945, with victory in World War II in sight, the grief was widespread, even among his political enemies, for many Americans had known no other President.

Many of them believed, and still do, that he had saved America and democracy, first from the abyss of the Great Depression by his trial-and-error New Deal programs, then from the totalitarian threats posed by Germany and Japan in World War II by unleashing the nation's vast military and industrial power.

The nation and the world that FDR left when he died on April 12, 1945, were vastly different from what he inherited on March 4, 1933, when he urged his countrymen, with his stirring speeches and fireside chats, to not let fear take hold of them, even in such a dark hour.

The Roosevelt years, 1933 to 1945, mark the transformative years of the 20th century—nothing after 1945 was much like what it was before 1933. FDR had, with the New Deal and in World War II, changed the nation's social, economic, and political landscape and made the United States the most powerful nation on Earth.

Through the New Deal and World War II, the United States had undergone, in a manner of speaking, a second American revolution, with Franklin D. Roosevelt presiding.

And the seeds were sown for even greater changes long after FDR was gone.

Executive orders banning discrimination in war production plants set the stage for the civil rights movement in the 1950s and 1960s. The need for men in combat drew women into the work force, where they showed they could do the jobs just as well, a theme echoed by the women's rights movements of later decades. The GI Bill put a college education within reach of the middle- and lower-income classes for the first time. 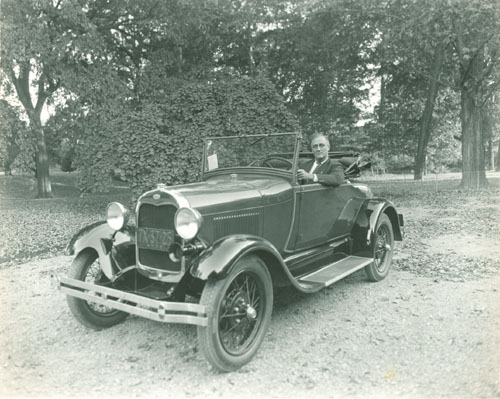 Putting America's industrial might into the business of making war materiel brought changes that would prove vital in postwar America: inexpensive ways to quickly mass produce war materiel, then consumer goods. Significant advances in technology to improve our weapons, then to improve our daily lives. Scientific breakthroughs in medicine, first to save lives in battle, then to improve the general health of Americans.

And FDR increased Washington's reach into the everyday lives of Americans, whether they lived in densely populated cities or on farms on faraway prairies. His "put people to work" programs brought federal buildings, bridges, dams, and new roads to all regions. His farm programs put the federal government into every county. His favorite New Deal program, the Civilian Conservation Corps, planted billions of trees where none had stood before. His financial watchdogs provided deposit insurance for big-city and small-town banks. His call to arms after Pearl Harbor would touch nearly every block of every city and town as the nation's young went off to war. And in government buildings and humble living rooms everywhere, a picture of "Mr. Roosevelt" hung proudly.

All the Presidents who have followed FDR have, to one extent or another, been compared to him. The author of the popular In the Shadow of FDR, William E. Leuchtenburg, noted that FDR was simply a tough act to follow for the 11 men who have succeeded him in the presidency:

"The shadow cast by FDR has created an imposing set of challenges with far-reaching consequences," Leuchtenburg wrote.

"The efforts of Roosevelt's successors. . . to prove their fidelity to FDR while distancing themselves from him," he added, "has done much to shape the course of events from the spring of 1945 to the present."

In observance of the 125th anniversary of FDR's birth on January 30, 1882, Prologue devotes much of this issue to an examination of the nation's thirty-second President. The articles on the following pages examine FDR's place in history, his leadership, his impact on the nation, and his legacy.

Celebrating FDR at 125: Events at the Roosevelt Library in 2007