Digging Deep at the National Archives

When Ken Burns and his documentary film company embarked on a major project on World War II, one of the first places they visited for original material was the National Archives.

Pictures—still and moving—provided the stark images that Burns and his associates needed to bring home the grim realities of war and the effects not only on American soldiers, sailors, and airmen at the front, but also on their families, friends, and neighbors back home in America's cities and towns.

As a result, the final product, The War, the 15-hour series that ran on the Public Broadcasting Service this fall, bears not only the familiar style of Ken Burns and his associates but also the marks of the National Archives, the source of so much of the still photography and footage that are integral to the story. "This film is really brought to life because of what's there in the Archives," said Sarah Botstein, producer for the series.

The National Archives has been for many years an essential stop for authors, television and movie producers, and others interested in World War II. In addition to the still photographs and film footage that the Burns team researched, the Archives holds millions of pages of paper records from World War II, in many cases files of individual military units. And the personnel records of all those who served in uniform, from the early 20th century forward, are preserved at the National Personnel Records Center in St. Louis, which handles thousands of requests from veterans for documents from their files every year.

"World War II was the pivotal event of the 20th century, and it cannot be fully realized and understood without spending time with the records of the war at the National Archives," said Michael Kurtz, assistant archivist for records services in Washington, D.C., who oversees the holdings that include World War II records.

Decades after its end, Kurtz said, World War II and its aftermath remain topics of intense public interest and ongoing research activity at the National Archives. Records made available by the National Archives and the presidential libraries—textual materials, still photographs, and film footage—provide the raw material for a continuing flow of books, documentaries, and films that attest to the powerful impact of the war on American society.

"Even today, more than 60 years later," he added, "a lot of our files on the war have yet to be fully mined for information."

The 15-hour documentary that Burns and his associates produced isn't the first one on World War II, but it takes a different approach, in the unique style of Burns's organization, Florentine Films.

The War explores not only the war on the frontlines of combat, in both Europe and the Pacific, drawing on still photographs and film footage from the National Archives and other sources, but also on the home front, and in doing so concentrates on four U.S. communities: Sacramento, California; Mobile, Alabama; Waterbury, Connecticut; and the small farm town of Luverne, Minnesota.

The series follows young men from these towns during their service in either Europe or the Pacific while it meshes these stories with the remembrances of their friends and relatives back home—as well as recollections today of some of the surviving soldiers themselves.

From the battlefield, the series depicts the horrors of death, whether the victims are civilians caught up in the war or the soldiers themselves, dead, dying, or killed as the camera captures the scene. From the home front, the series records the uncertainty and the anxiety that Americans faced, knowing little about the fate of their sons, fathers, brothers, husbands, or neighbors from day to day, hoping that a telegram from the War Department never arrives at their house.

The series makes use of photographs and footage rarely if ever seen, a fact noted by some of the generally favorable reviews the series got when it ran in September 2007.

"What's jaw-dropping (there's no other word for it) is combat footage we've never seen before that Burns and his team uncovered during five years of digging in the National Archives and other repositories around the world," wrote Sam Allis in the Boston Globe.

Co-producer/director Lynn Novick said that film research was mostly done by Botstein and co-producer Peter Miller. Having six years to work on finding footage from archives all over the world, she said, allowed them to uncover some that hadn't been seen much.

"Most of the footage, however, comes from the National Archives of the United States, which has an extraordinary collection," she told questioners in an online chat on the Washington Post web site. "And Sarah and Peter were able to find original camera rolls and material that really hadn't seen the light of day in the vaults of the National Archives." In the end, Botstein said, The War used more than a thousand clips of NARA footage.

Novick said that although some of the footage may have been seen before in other films, editors of The War used the film "in such a way that it makes you feel like you are actually there, rather than being 'wallpaper' or background filler."

World War II footage makes up almost one-fifth of the National Archives' approximately 360,000 reels of film, which are part of the extensive holdings of audiovisual materials that are preserved and made accessible at the National Archives—and used widely for movies and television documentaries, according to Les Waffen, head of the Motion Picture Branch. In the later years of the war, especially in the Pacific, color film was used, now accounting for about 10,000 reels.

Besides the film footage, the National Archives film holdings include 275,000 sound recordings and 110,000 videotapes. Included are collections from U.S. Government agencies, such as both black-and-white and color footage from the Army Signal Corps, the Navy Department, the Air Force, the Marine Corps, and the Office of War Information.

Within these holdings are some truly unique films and film collections, such as donated collections of newsreels and television and radio newscasts. They include Universal Newsreels from 1929 to 1967, Paramount Newsreels from 1941 to 1957, and Fox-Movietone News from 1957 to 1963. A collection of ABC Radio News dates from 1943 to 1972.

For years, NARA's rich audiovisual resources have been researched for movies and documentaries. Each year, thousands of researchers screen NARA holdings for documentary productions on cable television, such as the History Channel, the A&E network, TLC, and the Discovery Channel—as well as for programming on the Public Broadcasting Service. Documentary filmmakers Charles Guggenheim and Burns have drawn from the collections for their award-winning films and television series.

For The War, Botstein spent about three years going back and forth from New York to College Park doing research in the films pertaining to the war in Europe and the home front. Miller did film research on the war in the Pacific. "It's very hands-on at the Archives, and we were able to do a lot of the research ourselves, rather than just looking at card catalogs and ordering materials," Botstein said. 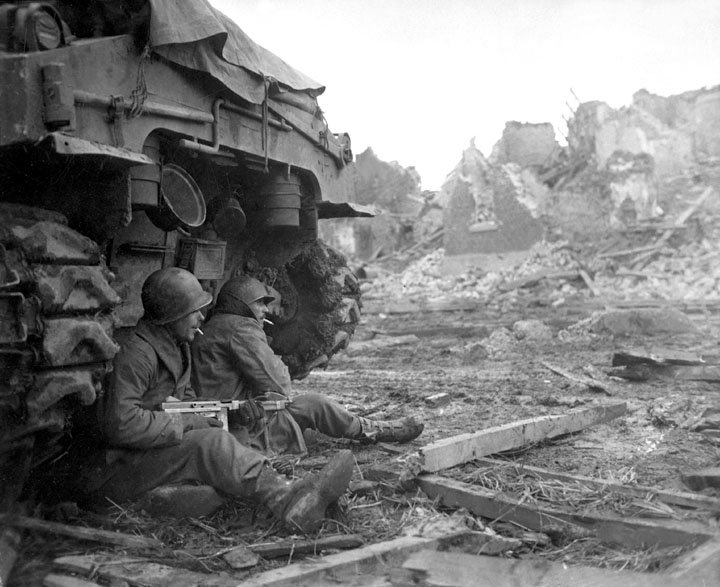 But The War, like other productions from Ken Burns, also made extensive use of black-and-white still photographs.

Ed McCarter, head of the Still Pictures Branch at the National Archives at College Park, said that the National Archives has between 9 million and 9.5 million still photographs, and about 1.5 million of them involve World War II. They come from all branches of the service: the Army, the Navy, the Army Air Corps, the Marines, and the Coast Guard. A small number of them are in color.

"The World War II stuff has always been active," he said. "There's a pretty constant flow of requests." For example, of the 10 most requested photographs from the National Archives that Prologue featured in its Winter 2004 issue, seven were World War II related.

Holly Reed, an archivist in the Still Pictures Branch, said that one of Burns's researchers, co-producer David McMahon, spent weeks at a time over several years researching photographs at the National Archives in College Park. And, she added, he was looking for something different.

"They [Burns's team] did try to get the iconic type images that everybody knows about," Reed said, "but they were also looking for that good image that isn't known."

While most researchers do not want to go through box after box and settle for the ones frequently seen, according to Reed, that wasn't the case with Burns's team. They tackled the boxes and came up with many still images that have been seen only rarely or not at all over the years.

Eventually, Botstein said, The War used about 330 still photographs from the National Archives.

That Burns and his associates would spend so much time and draw so much of their material from the National Archives is no surprise. Much of the documentation about World War II, like other important chapters in the history of America, is available and accessible at the National Archives or on its web site, www.archives.gov.

"It's the free public archives of our country, and one of the huge privileges of being an American," Botstein said. "It's a wonderful place to visit in Washington."

The National Archives web site, Archives.gov, has a wealth of information about World War II for everyone from historians to veterans.

Here are some specific web pages pertaining to World War II on Archives.gov that may be of particular interest: