The Forgotten Federal Census of 1885 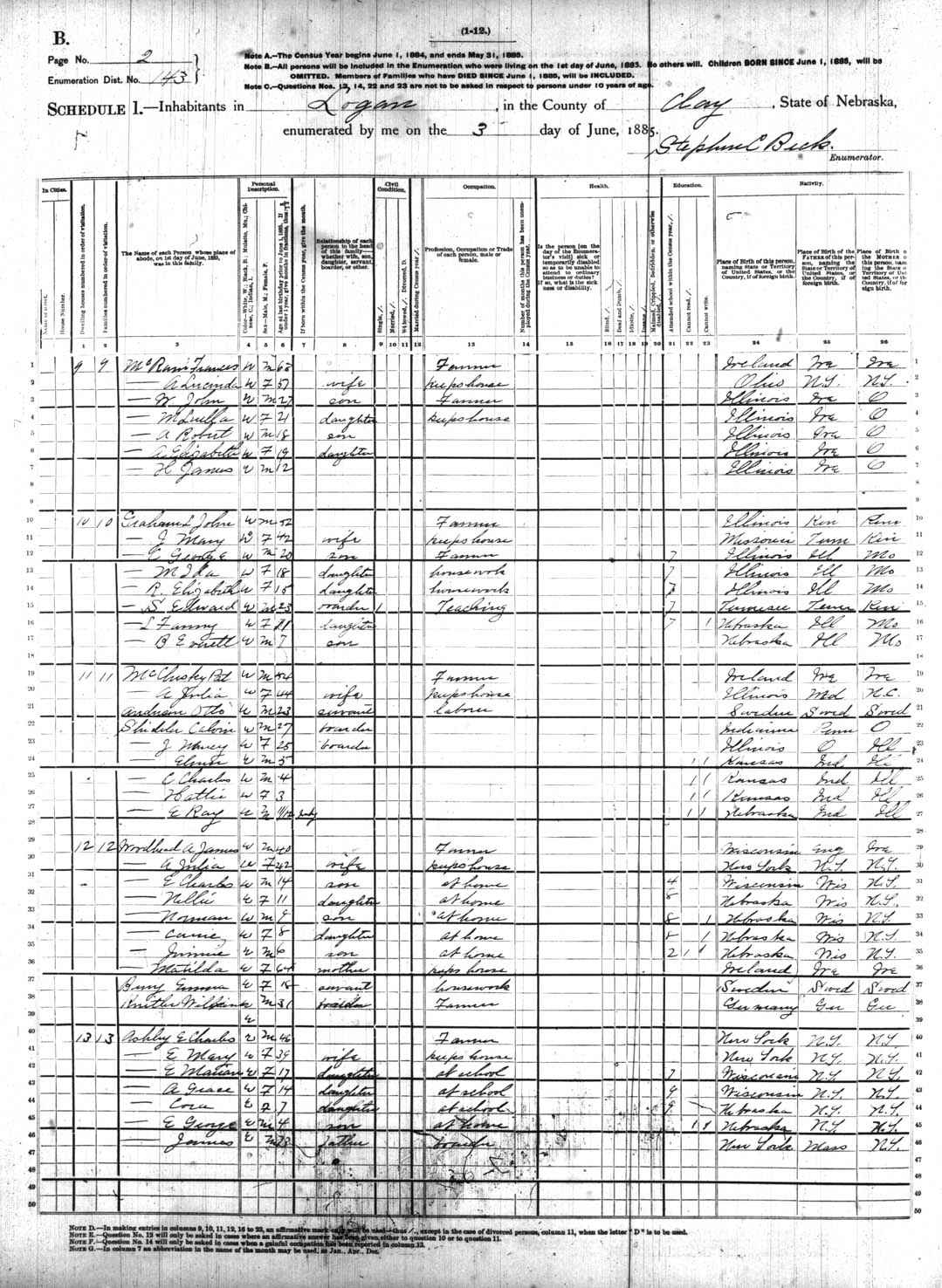 Enlarge
The 1885 federal semicentennial census for Logan Township, Clay County, Nebraska, provides much information on the farmer A. James Woodhead. (Records of the Bureau of the Census, RG 29)

A. James Woodhead of Logan Township, Clay County, Nebraska, was a 40-year-old farmer who was born in Wisconsin.1 He was a first-generation native-born citizen; his father had been born in England, and his mother, in Ireland.

He was married with five living children, three boys and two girls. Also living in the household was his mother, Matilda, who assisted his wife, Julia, with the housework. All of his children, except for the oldest, were born in Nebraska. His oldest son, Charles, age 14, was born in his father's home state of Wisconsin.

Despite Mr. Woodhead's apparent material wealth, his life was not perfect. His wife, Julia, who had been a resident of Clay County for about 13 years, died in September 1884, at the age of 42. She had been stricken with cholera.3 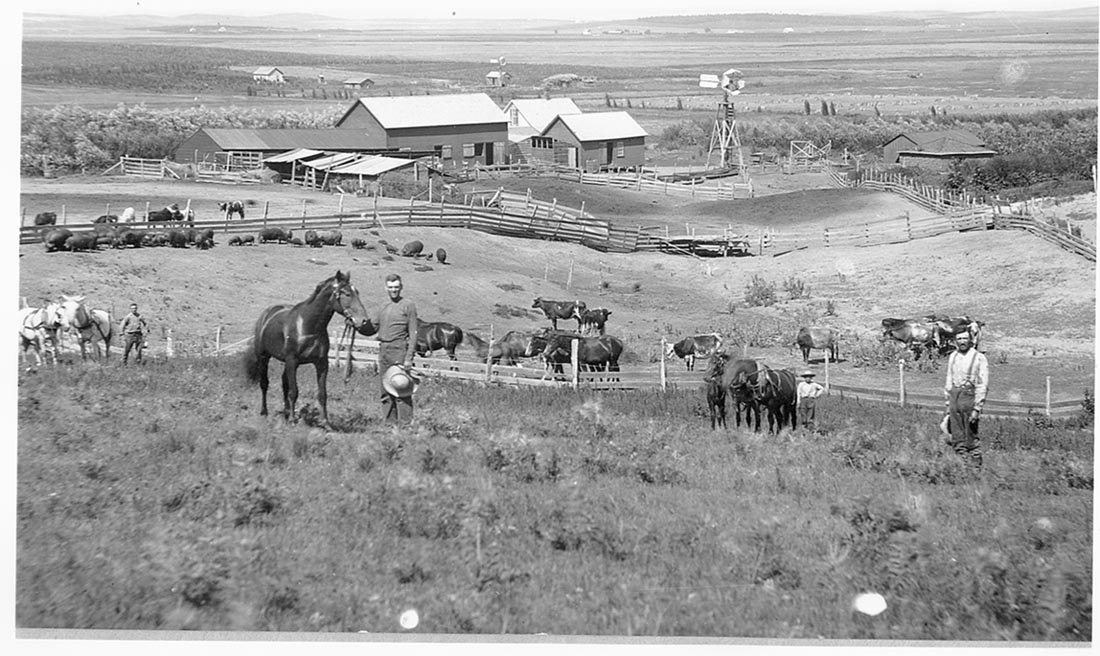 How can someone find such detailed information about a family living in the mid-1880s? By using the 1885 federal semidecennial census schedules.

The act of March 3, 1879, which regulated the 1880 census and subsequent censuses, also requested that states and territories take a semidecennial census. This census was to be taken "during the two months beginning on the first Monday in June of the year." Each state or territory that complied with this request was to receive, from the federal treasury, 50 percent of the amount paid to all supervisors and actual enumerators within that state or territory.4

In accordance with this act, censuses were taken in 1885 in the states of Florida, Nebraska, Colorado, and in the territories of New Mexico and Dakota. With the exception of the 1885 Dakota Territory census, all copies were transferred to the National Archives in 1944. 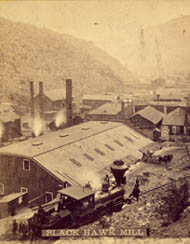 The 1885 census included four general schedules: population, agriculture, manufactures, and mortality. These schedules are organized alphabetically by county and thereunder by the number assigned to each type of schedule. Within each type of schedule the records are arranged by enumeration district.

The 1885 population schedule resembles a typical census schedule and can provide valuable information that can be used to fill the gap caused by the loss of the 1890 federal census in the 1921 Department of Commerce fire.

The first two columns provide the street name and the house number. The next two give the visitation number and the family number. As with all post-1840 census schedules, all members of the household are listed. Also listed is the relationship of each person to the head of household, their age, sex, color, and their birth month if born in the census year. Included along with each individual's personal description is information on their "civil condition"—single, married, widowed/divorced—along with a notation if the individual married during the census year.

The second half of the population schedule gives the occupation of each individual over the age of 10 and asks for the number of months he or she had been unemployed during the census year. The next section records information about the person's health. Question 15 asks, "Is the person sick or temporarily disabled? If so, what is the sickness or disability?" In questions 16 to 20, the enumerator recorded if the individual was blind, deaf and dumb, idiotic, insane, maimed, crippled, bedridden, or otherwise disabled. Questions about an individual's education are found next. The last section of the population schedule will give the birthplace of the individual and his or her parents. 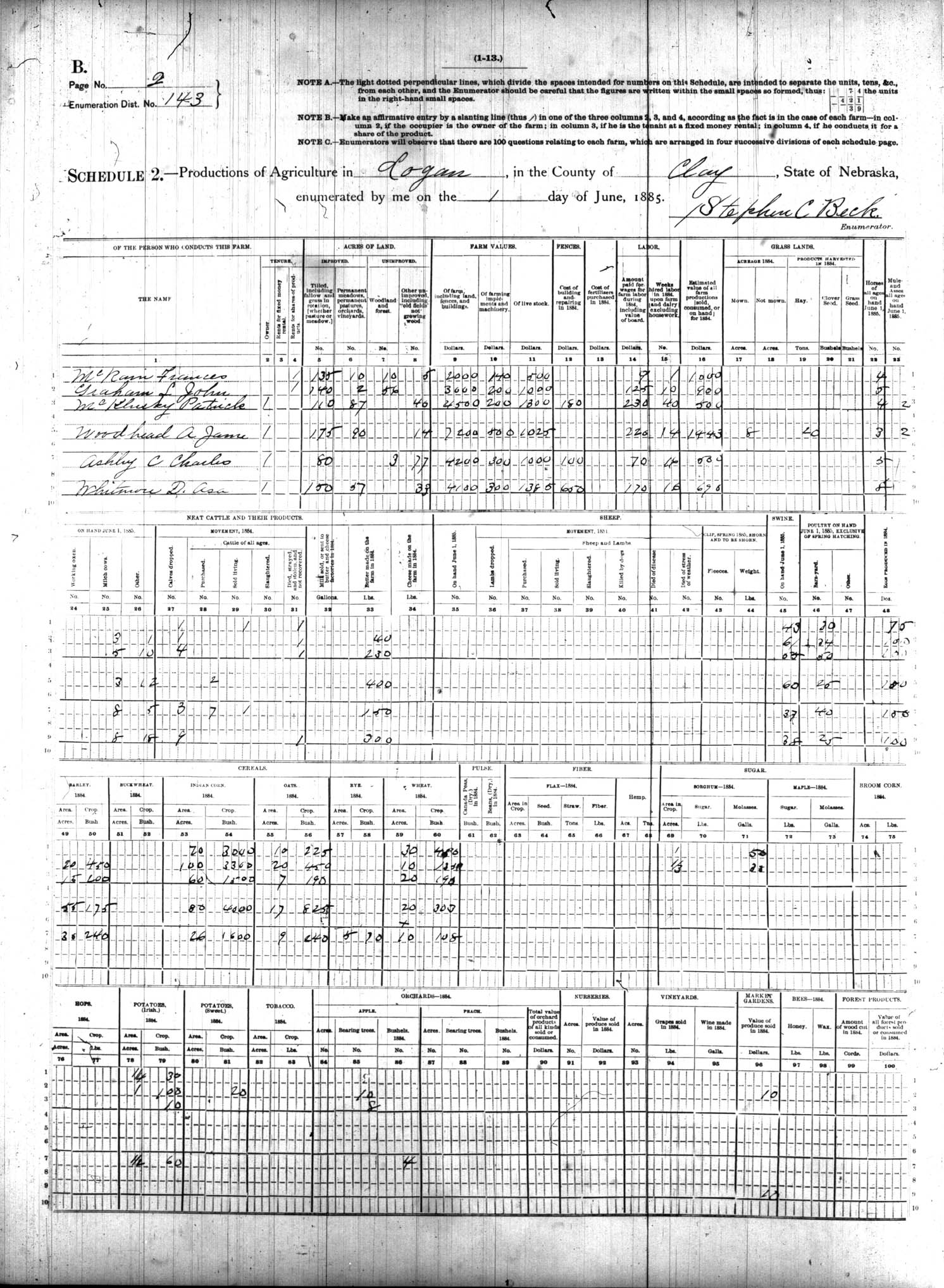 Enlarge
The 1885 agricultural schedule recorded extensive data on farm and ranch activities. A. James Woodhead is the fourth person listed on the schedule. (Records of the Bureau of the Census, RG 29)

If you are looking for someone who was a farmer or otherwise involved in agriculture, look to the 1885 agricultural schedules. These schedules provide unparalleled information about what types of goods were produced and give insight into the amounts that were produced in the year prior to the census. The enumerator asked 100 questions pertaining to each farm. The first column indicates the name of the person who worked the farm. This person then was required to state his tenure—owner, rents for money, or rents for shares of products. Information about the land included the number of acres used or not used for farming and the value of the farm and buildings, any machinery, and livestock. The next set of questions refer to the amount of money spent on building or repairing fences, on purchasing fertilizer, spent on labor, and the number of weeks when hired labor worked daily. The rest of the schedule pertain to the amounts and type of livestock the farm had on hand and asks questions about the goods produced—cereals, grain, tobacco, and potatoes, to name a few. 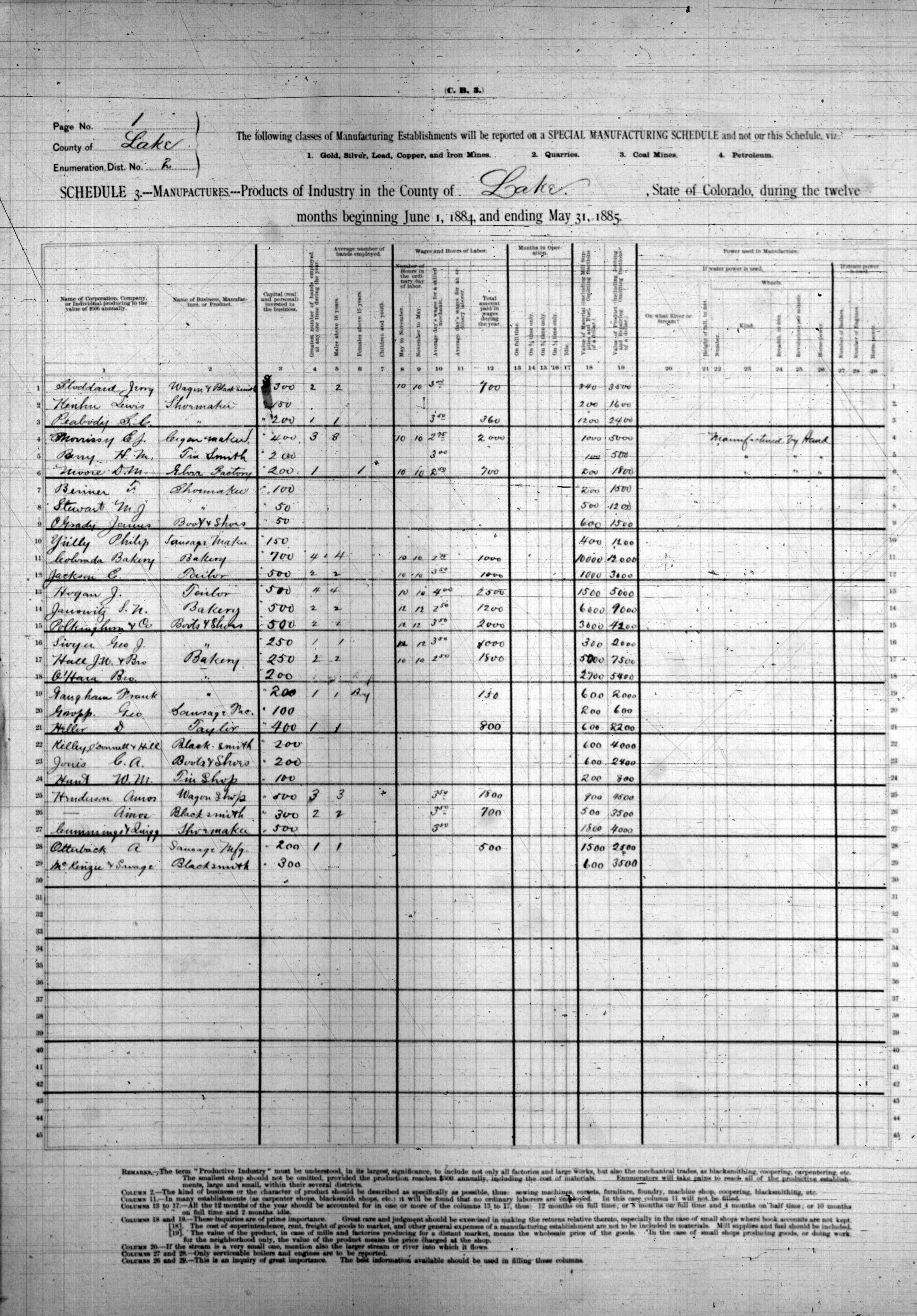 Enlarge
The 1885 manufactures schedule provide the name of the corporation, company, or individual; type of business or product; capital invested; number of persons employed and hours required for skilled versus ordinary laborers; and number of months the company was in full-time or part-time operation. (Records of the Bureau of the Census, RG 29)

The 1885 manufactures schedule was specifically for corporations, companies, or individuals producing at least $500 annually. The schedules provide information on the number of people employed by the company, the wages provided and the hours required for skilled mechanics versus ordinary laborers. The form also asks for the total amount paid in wages during the prior year, the value of materials and products produced by the company, and the number of months the company was in full-time or part-time operation. The final section of this schedule gives information on the types of power being used by the company—water power versus steam power.

These schedules include the name of the deceased, a personal description (age, sex, and color), marital status, birthplace as well as parents' birthplaces, profession, the month in which the person died, the cause of death, the length of their residency in the county, the place where disease was contracted, and the name of the attending physician.

A second smaller schedule found with the above schedule provides more information about the deceased. The first section of this schedule pertains to individuals who died within the enumeration district but who had families who resided outside the district. In this case the town, county, and state are listed for the deceased's family. 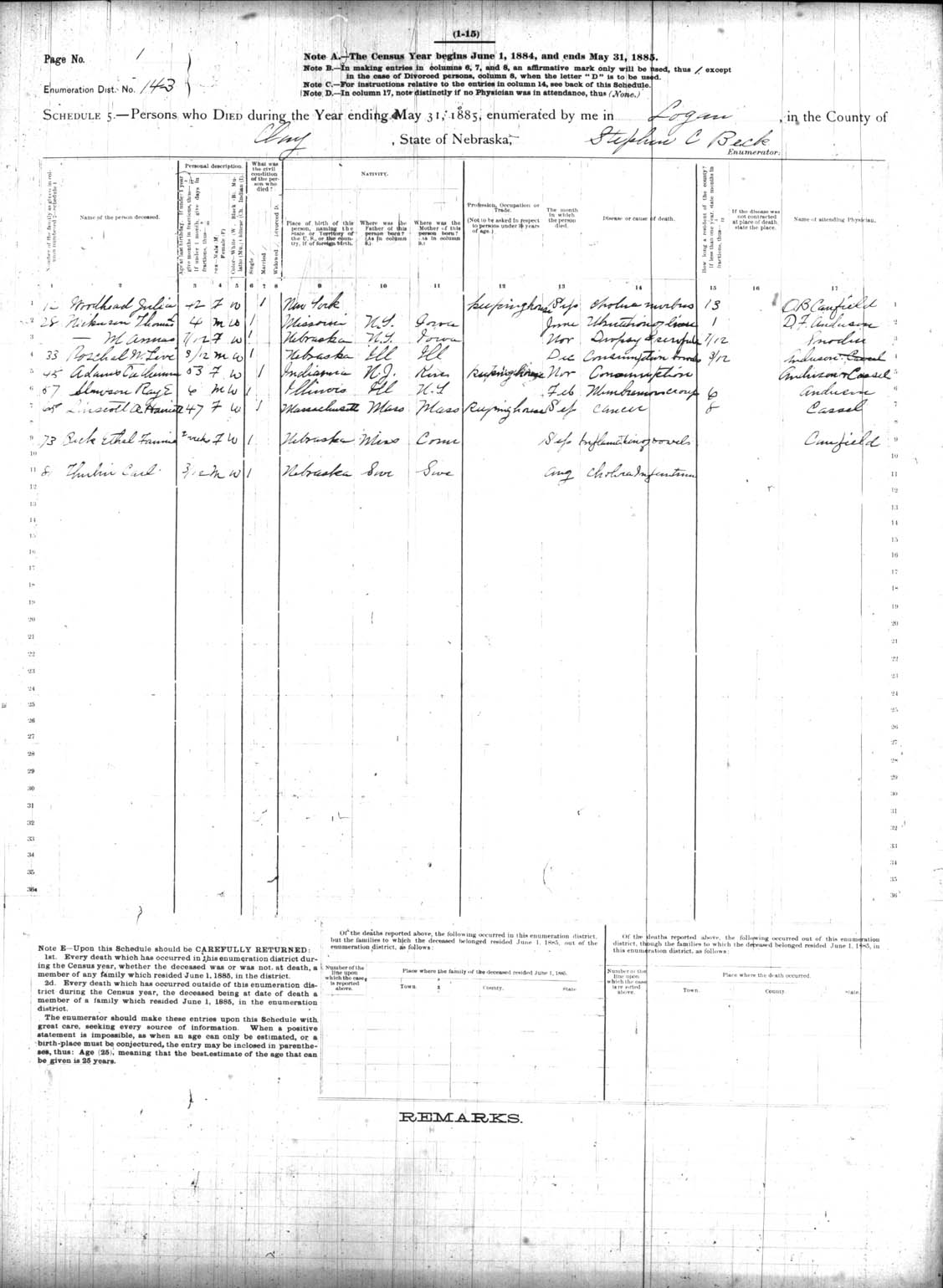 Enlarge
The 1885 Nebraska mortality schedule for Logan Township records that Julia Woodhead died of cholera at the age of 42 in September 1884, and that she had lived in the county for 13 years. (Records of the Bureau of the Census, RG 29)

The third and final section of the 1885 mortality schedule provides a statement from the attending physician. This statement would list the primary and immediate causes of death along with a signature of the attending physician. At the bottom of each page a space was left for physician's remarks. This space was to be used if any particular malady or strange disease caused a significant number of deaths in the enumeration district, or if an unusual amount of deaths were recorded due to violence or an accident. It was also stated that all enumerators should ask the physicians in the area to examine all entries and verify or restate the information given about their patients.

Despite the limited participation in the 1885 federal semidecennial census, those who are researching individuals in Florida, Nebraska, Colorado, or in the territories of New Mexico and Dakota have a chance to find information that may be very significant and may not be found anywhere else.

Rebecca Crawford is an archives specialist with the Research Support Branch of the National Archives and Records Administration. She oversees the operation of the Microfilm Research Room in Washington, D.C.