The First Time Around

Book Chronicles the British-American Coalition Force in World War I 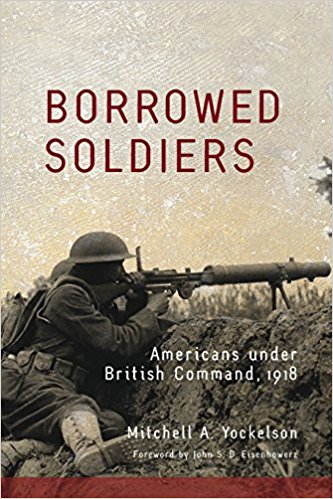 Many a doctoral student has been so enthralled with his or her subject matter that they later revise a dissertation into a book. Count Mitch Yockelson, an archivist at the National Archives, among them.

Yockelson wrote his dissertation on the U.S. Army II Corps during World War I and became intrigued by the fact that its two divisions had spent their entire service in Belgium and France with the British Expeditionary Force.

“The story of these two American divisions, the 27th and 30th, is unique and hadn’t really been told before,” he said. “The fact that they trained and fought in Belgium and France with the British Army is a little-known story of World War I. NARA's holdings include a number of collections that document this experience.”

The result was Borrowed Soldiers, the story of the 27th and 30th divisions, and their British and Australian co-belligerents.

The foreword to the book is written by John S.D. Eisenhower, a respected military historian himself and son of the man who would lead another British-American allied force to victory against Nazi Germany in World War II, Dwight D. Eisenhower.

From what vantage point did you approach the research for this book?

As historians we are trained to look objectively at a subject and approach it from all angles , then let the research guide the story. For instance , I wanted to know how these unique American soldiers viewed their relationship with the British and Australian troops. So I concentrated on locating sources that offered a broad picture of the experience.

What were those sources?

I researched official U.S., Australian, and British Army records, as well as personal papers, diaries, and letters in repositories throughout the United States, England, Scotland, and Australia. But ultimately I relied upon Record Group 120 (Records of the American Expeditionary Forces) at the National Archives. Among the treasures found in this record group are documents created by the officers and men of the 27th and 30th Divisions. They provide a glimpse of how training was conducted in the United States and in Belgium and France, and then combat alongside the British forces on the Western Front in 1918.

What sort of description of Army life in the United States during World War I emerges from these records?

The records tell what it was like for a young soldier to have trained in an Army camp during the 1917–1918 period. Conditions were spartan, and the enlisted men slept in tents while officers had more permanent structures. Training started early in the morning and lasted through most of the day. It consisted of marching, physical fitness, weapons firing, and the rudiments of being a soldier. Leave was permitted only on weekends, and soldiers could visit a nearby city and get a hot meal, a hot bath, perhaps watch a play or relax at a YMCA hostess house.

How does research in archives outside the United States compare with doing research in the National Archives?

During the course of my research I visited the National Archives of the United Kingdom, the Australian War Memorial in Canberra, the National Library of Scotland, and other lesser known overseas repositories. All of them were a pleasure to work in, but research at the National Archives is much easier. For one thing, we have subject area specialists who can advise researchers on not only what records to access but also the latest historiography on a subject.

Generally speaking, records filed in the repositories overseas do not have the luxury of agency-created finding aids like many U.S. Government-created records. Descriptions of the records are sparse, and you really don’t know what to expect when making a request.

What was your biggest challenge in confronting the records here at the National Archives as well as those in other archives?

By far the biggest challenge in conducting research at any repository is the sheer volume records you confront and having to weed through them and figure out what is important. But then the opposite can happen when you plan a major research trip, and within the first couple of days you find nothing and go into complete panic. This happened when I went to Canberra. My first two days were frustrating, and I thought I had just traveled a great distance only to waste my time. But I persevered and eventually hit gold and actually ran out of time at the end.

What did the diaries of American, British, and Australian soldiers tell you that you could not find in official documents?

The diaries written by soldiers during the First World War are extremely valuable because they give a personal touch to the war that you wouldn't find in operations reports and after-action reports. The diaries tell what an individual soldier felt at the time and his opinions on officers and life in the Army. Diaries are more useful than letters since the letters were censored, and any mention of battles or places were deleted.

Do any of them stand out in your mind as being particularly valuable or revealing?

None of the diaries were particularly revealing, but the letters of the Australian Corps commander, Gen. Sir John Monash, were. He was a very meticulous officer, and his correspondence reveals his thought process as he considered every detail when planning an operation. He researched the weather forecast; the position of the moon, since most operations commenced before sunset; and the time it should take a unit to reach a particular position.

Just how crucial to the war effort was the work of this combined force?

The combined Allied coalition of American, British, and Australian soldiers attacked the strongest section of the German Hindenburg Line in the Somme Valley, north of Paris. Here the Germans occupied farms and villages and constructed concrete bunkers and machine-gun posts that were largely impregnable. On September 29, 1918, the Americans spearheaded the attack and, although they took significant casualties, were able to crack the line and send the Germans on a slow retreat toward Germany and eventually an armistice. The British and Australians supported the attack, but the Americans did the brunt of the fighting.

Can you compare/contrast the different command structures of the British, Americans, and Australians and how this helped or hurt their effectiveness?

The Americans were the least experienced of the Allies, and their commanders had little idea how to conduct a modern war such as the one being fought on the Western Front. So the American officers relied on the British and Australians to teach them how to lead men in combat against entrenched positions while facing machine guns, gas, and heavy artillery fire. In the United States, officers were trained in tactics of open warfare where men charged positions; the British and Australian officers fought from the trenches, and only during the last few weeks of the war was the fighting more mobile.

How did the Americans get along with the British? And the Australians?

For the most part, the Americans got along fine with the British soldiers and even better with the Australians. But with the former, there was some animosity on the part of the British who wanted the American troops to amalgamate with their own Army—in other words, fight under British commanders. The commander of the AEF, Gen. John J. Pershing, would have no part in this. He wanted his men to fight independently, and even though the two divisions that I write about were attached to the British, they served under their own officers. One thing that did annoy the British was that the American doughboys bragged how they were much better soldiers and they would tell the British, who had been at war since 1914, how to fight. There was a machismo and arrogance on the part of the Americans that struck a raw nerve with the British. The Australians, on the other hand, were similar to the Americans and appreciated them much more and they got along fine.