The NHPRC: Extending the Archives’ Reach

NHPRC support went to preserve, arrange, and describe the records of the National Council of Negro Women from 1938 to 1959 and more. The council is photographed here in 1940. (NHPRC photo)

Just as the origins of the National Archives and Records Administration can be traced to the 19th century, and men like John Franklin Jameson, so too can the roots of the agency’s grant-making arm, the National Historical Publications and Records Commission (NHPRC).

As professional groups of historians and others waged what would be a decades-long campaign for a national archives, Jameson in 1891 made the first call for something more than just an archives, more than a repository of federal records. He called for a commission with the "power to edit and publish not only materials in possession of the government but also those which are in private existence."

Historians knew that the full story of America could not be told with only records held by the federal government; important records in private hands—especially the personal papers of historically significant Americans—also had to be preserved. For example, early attempts to collect complete editions of the papers of our founders were flawed because they ignored documents hidden in private collections or those outside of federal stewardship.

Jameson made his proposal for this commission in a paper published in the annual report of the American Historical Association (AHA), which had been spearheading the movement to establish a national archives as well as a federal commission to focus on records and publications. By 1909, the AHA’s "Keep Commission," named for its head, Charles Keep, issued a report on interdepartmental concerns about records preservation that warned of a risk of "an unscientific course, substituting criteria dependent on the accidents of deposit or ownership."

World War I slowed progress on the campaign for a national archives, but in the 1920s, planning for an archives building got under way, and ground was broken in early 1931. By the time President Franklin D. Roosevelt signed legislation in 1934 creating the National Archives itself, it also included an entity called the "National Historical Publications Commission," which was to "make plans, estimates, and recommendations for such historical works and collections of sources as seems appropriate for publication and/or otherwise recording at public expense."

For years the Commission made recommendations for the publication of the records of the nation’s founders, including such men as Benjamin Franklin, Thomas Jefferson, John Adams, George Washington, Alexander Hamilton, and others, but had no means to carry out its recommendations. Finally, in 1964, the Commission received funding to make grants, at the recommendation of President John F. Kennedy, who had written in response to a 1963 report, "If the commission is to plan a balanced national program of editing and publication, it must have resources on which it can depend."

With its first grant money, the Commission funded 23 projects, including one for The Documentary History of the Ratification of the Constitution, which had been proposed in 1936. 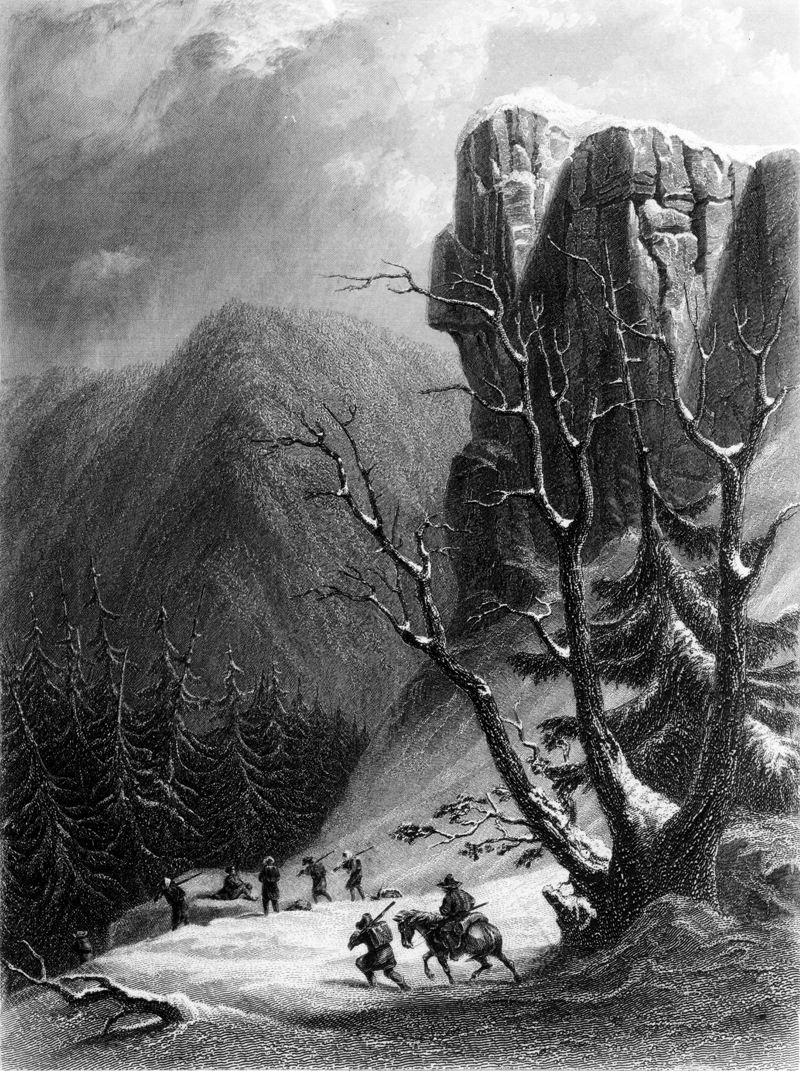 Over the passing decades, the Commission, now called the National Historical Publications and Records Commission, has funded 4,500 projects, investing $185 million across the country—projects that have produced literally hundreds of thousands of linear feet of archival material that has led to untold discoveries by genealogists, archivists, and historians.

Today, the NHPRC’s mission has much expanded. It now incorporates a grants program that emphasizes both preservation of, and access to, historical records of national significance, wherever located. The NHPRC complements the National Archives’ mission by providing assistance to state and local governments, colleges and universities, and nonprofit institutions that maintain and make accessible a vast network of historical records. In fact, the NHPRC is the sole grant-making organization in the nation whose exclusive focus is preservation of, and increased access to, the nation’s archives. Through its grants program, the NHPRC currently supports four basic types of projects: publishing, records preservation and access, professional development, and state and national archival partnership grants.

The NHPRC’s program to publish historical records of national significance is largely given over to historical documentary editions—multivolume collections of select annotated documents. The projects cover the full length of American history, and among the many noteworthy figures are Martin Luther King, Jr., Abraham Lincoln, Thomas Edison, and Eleanor Roosevelt. These primary source materials are invaluable to historians, students, and others in creating contemporary histories, and the projects tend to have an impact far beyond their final products. Take, for example, the longstanding support for the Papers of John Adams. These formed the backbone of historian David McCullough’s Pulitzer Prize–winning biography, which in turn, led to the creation of an HBO miniseries, through which tens of millions of people got to see and hear the words of John and Abigail Adams come to life.

A special subset of the publishing program is the Founding Era of the United States—the papers of John Adams, Benjamin Franklin, Thomas Jefferson, James Madison, George Washington, and Alexander Hamilton (completed) and records that document the first Supreme Court (completed), the ratification of the Constitution, and the First Federal Congress. Historical editing fellowships allow publications projects to train scholars in the field’s best practices. 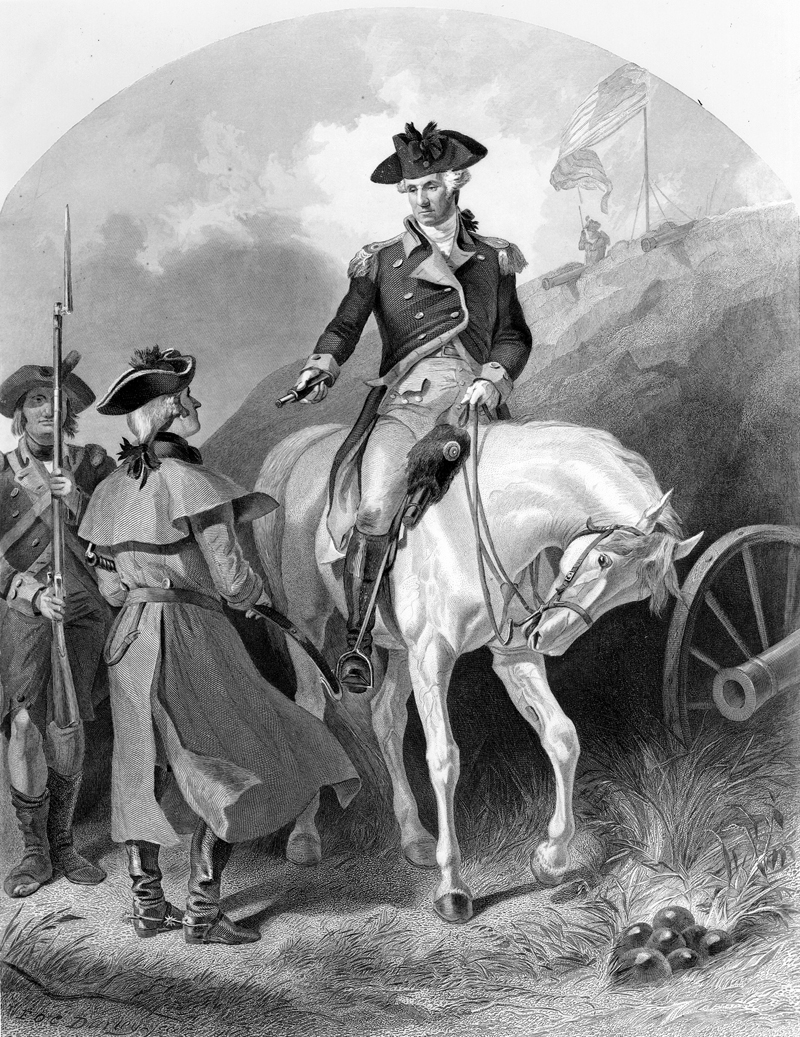 George Washington at the outposts of Valley Forge. The University of Virginia is publishing a comprehensive edition of the papers writen by or to the first President. (NHPRC image)

Since 1974, when the Commission expanded to include grants for records and archives, the NHPRC has funded projects in every state and territory designed to preserve and increase use of historical records. This funding stream supports basic archival projects to reveal "hidden collections" by processing backlogs and to help institutions plan for, and begin, their own archives or records management programs. Detailed processing projects allow archives to provide the public with in-depth information about historical collections of national significance using state-of-the-art guides and finding aids to such materials. Other funded projects have supported the preservation of illuminating photographs, film, blueprints, and audio and videotape.

Natural disasters have spurred support for projects that help archives plan to mitigate damage and to recover when hurricanes or floods hit. Moreover, the NHPRC is regarded as the federal funder of choice by small archives and historical societies, first-time applicants for federal assistance, and those who would address the imminent risk to the documentary heritage of African Americans, Native Americans, Asian Americans, women, and other ethnic and religious groups long in need of support. In the past two years, the Commission has expanded its focus to include a Digitizing Historical Records grant program to support free online access to historical documents via the Internet.

For more than 15 years, the NHPRC has led the way in supporting basic and applied research to ensure the long-term preservation and easy access to authentic electronic records at the state and local levels. Just as the National Archives has recognized the building of an Electronic Records Archives (ERA) as the most critical effort to ensure the preservation of and access to government records, the NHPRC has supported research and development in this field. It funded the participation of American scientists and archivists in a major international collaboration, the International Research on Permanent Authentic Records in Electronic Systems (InterPARES) project, to define the scope of the problem of digital preservation and access. Every year, state governments, universities, and other nonprofit institutions turn to the NHPRC for help in finding the best ways to handle the deluge of electronic records with which they are grappling. 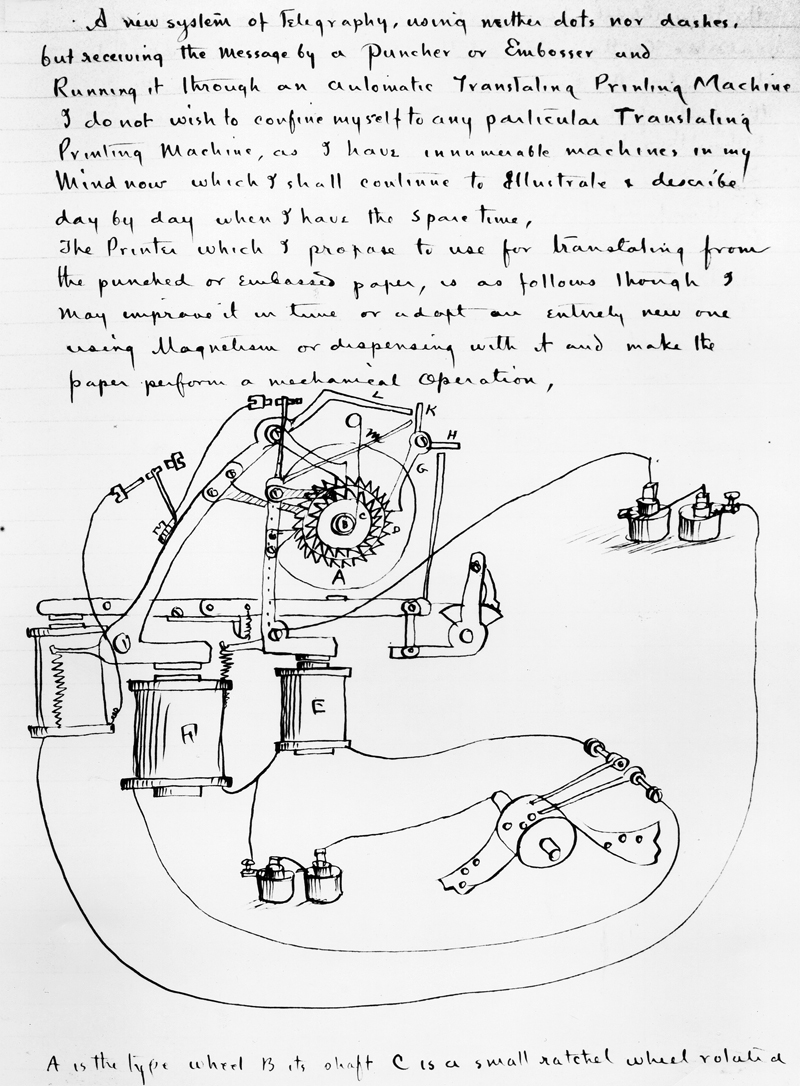 Professional development grants are given to improve the training and education of professionals in the archival and historical publishing communities. The Institute for Editing Historical Documents, an annual one-week professional development session for junior and mid-level editors, is now in its 38th year. The Archives Leadership Institute, designed to provide archivists with leadership skills and training, was inaugurated last year at the University of Wisconsin-Madison, cosponsored by the Wisconsin Historical Society.

The NHPRC collaborates with state archives through the State Historical Records Advisory Boards (SHRABs) to plan and carry out jointly funded programs to strengthen the nation's archival infrastructure and expand the range of records that are protected and accessible. The Council of State Archivists and the state boards have worked with the NHPRC to create a new funding program—the State and National Archival Partnership—that provides modest federal support to enhance public access to local historical materials that document citizenship, trace family histories, and capture the national experience in communities across the land.

Through its broad array of programming, the NHPRC fulfills J. Franklin Jameson’s vision for a multifaceted agency that preserves the most vital documents of the federal government, publishes or otherwise makes available to the general citizenry a selection of historical documents, and helps state, local, and nongovernmental organizations preserve and make accessible the rich documentary heritage that is our common birthright.

As Thomas Jefferson wrote in 1791 upon receiving the first two volumes of an early record of our legislative history, "let us save what remains; not by vaults and locks which fence them from the public eye and use . . . but by such a multiplication of copies, as shall place them beyond the reach of accident." Jefferson and Jameson both understood that original primary sources serve as first hand testimony to history and, as such, they must be preserved and made broadly available. As we celebrate our 75th anniversary, the NHPRC eagerly looks forward to continuing this tradition of public access to American history. 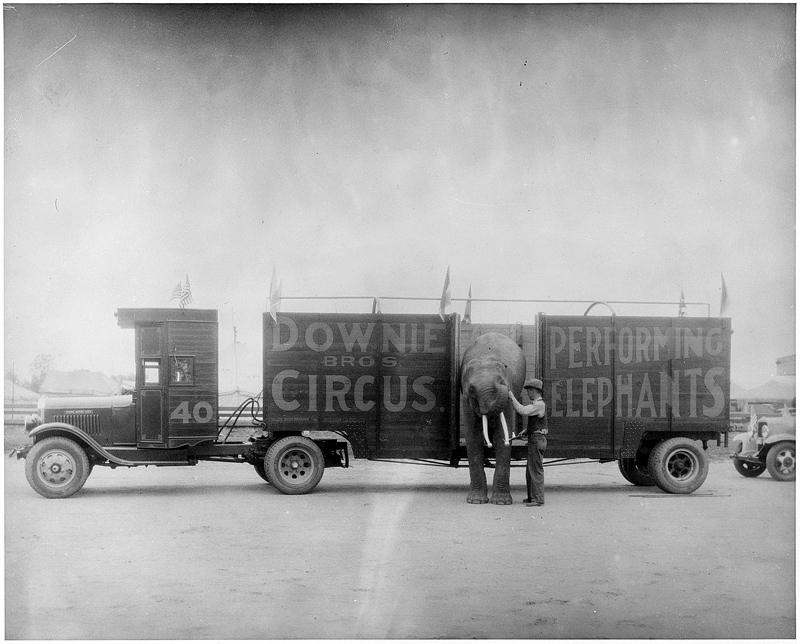 The Downie Brothers Circus comes to town in 1931, part of the North Carolina Division of Archives and History Photographic Collection of Albert Barden. Preservation of this extensive collection is made possible by an NHPRC grant. (NHPRC photo) 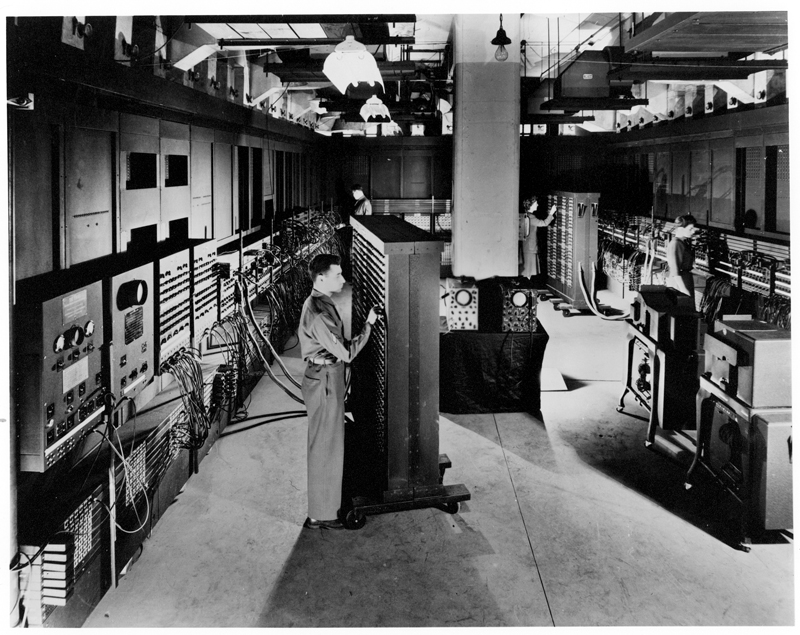 NHPRC funds to the University of Pennsylvania enabled preservation of records on the development of the Electronic Numerical Integrator and Computer, the world's first digital computer. (NHPRC photo)

The National Historical Publications and Records Commission makes a profound impact on the nation’s archives, providing researchers, scholars, and ordinary citizens with direct access to the primary sources of history. Since 1964, the NHPRC has funded 4,500 projects, investing $185 million across the country. These projects have produced literally hundreds of thousands of linear feet of archival material that has led to untold discoveries by genealogists, archivists, and historians.