In population censuses each person is to be enumerated at his or her "usual place of abode," the place where the person lives and sleeps most of the time. The usual place of abode can be a home, hotel, apartment building, train, car, closet, or even a cardboard shed. This assumes that the person is living in a state, territory, or possession of the United States. But what about people living overseas either in the military or working as federal civilian employees?1

The 1830 and 1840 censuses published separate population counts for people living overseas, which were limited to the crews of naval vessels at sea. No documentation, however, has been found that explains how the counts were obtained.2 The few number of citizens living abroad for an extended time and the difficulty of communications back and forth made taking an overseas census impractical.3

The 1850 census is the first time the instructions to the enumerators had rules pertaining to people abroad or at sea:

The assistants in all seaports will apply at the proper office for lists of all persons on a voyage at sea, and register all citizens of the United States who have not been registered as belonging to some family.4

An 1850 census report stated that "American residents abroad should be ascertained through the State Department" but did not indicate whether any overseas counts were made or include in any tabulations.5

The 1860 census appears not to have included information of Americans living abroad or on ships at sea. Instructions to assistant marshals in 1870 and enumerators in 1880, however, indicated that "seafaring men are to be reported at their land homes, no matter how long they may have been absent, if they are supposed to be still alive."6

Americans abroad or at sea were enumerated on Schedule 1, Population, Military and Naval Population.

Civilians, Residents of the United States at Military or Naval Stations 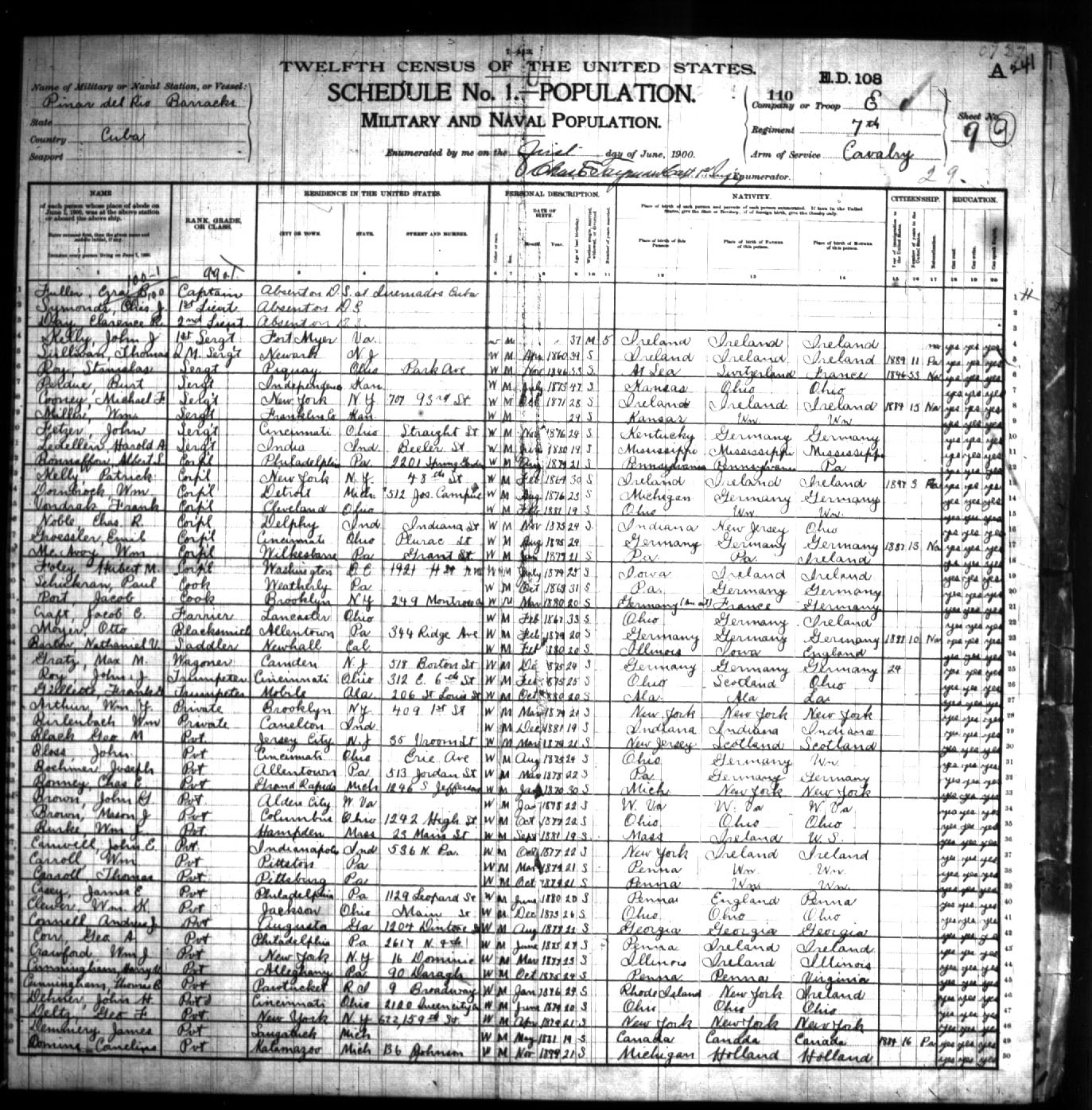 The 1900 census schedule for Troop E, Seventh U.S. Cavalry, is arranged by troop, then by rank, and then alphabetically by last name. The captain and first and second lieutenants note only that they are absent on D.S. [duty station] at Iuemados [or Inemados] Cuba; however, they do not appear to be noted anywhere else on the census. (Records of the Bureau of the Census, RG 29) 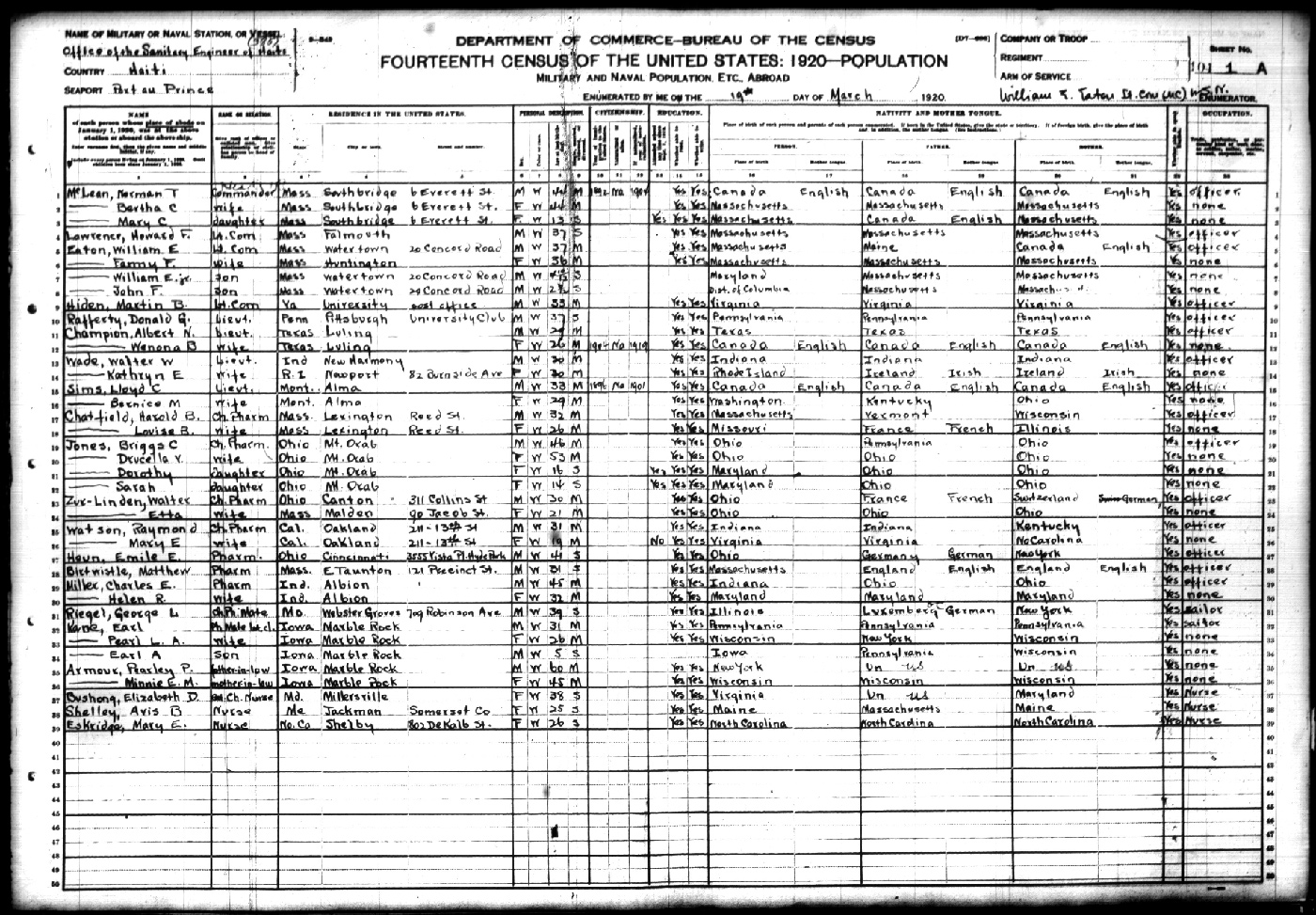 The 1920 census for Military and Naval Populations, Etc., Abroad enumerates the Office of the Sanitary Engineer for Haiti at Port au Prince. In this census the men listed as officers appear with their families and do not appear to be listed elsewhere. (Records of the Bureau of the Census, RG 29)

In 1910 the War and Navy Departments cooperated with the Census Bureau in enumerating Americans living abroad. "Living abroad" was defined in the 1910 census reports as living "beyond the limits of the United States proper and outside the outlying possessions including Puerto Rico and the Alaskan and Hawaiian territories."9

The 1920 census was the first to use a form specifically for citizens living abroad, which included U.S. military personnel at military and naval stations abroad and their dependents living with them; U.S. naval personnel on naval vessels abroad or in American waters, but not on fixed stations; and people living abroad in the service of the American Red Cross or in the U.S. consular service and their dependents, including servants, living with them. (Red Cross workers included people working overseas at the end of World War I.) This form added a column for rank and the U.S. address of each person enumerated. No records that describe how the forms were distributed, collected, or processed have been found.

The 1920 instructions to the enumerators defined a "citizen abroad" as any citizen of the United States who is a member of a family living . . . abroad temporarily at the time of the enumeration. . . . It does not matter how long the absence abroad is continued, provided the person intends to return to the United States.10

The 1930 census reported 89,453 citizens living abroad. These included U.S. military personnel at military and naval stations abroad and their dependents living with them; U.S. naval personnel on naval vessels abroad or in American waters, but not on fixed stations; and people abroad in the service of the American Red Cross or in the U.S. consular service and their dependents living with them.

The Census Bureau had a separate form for the crews of merchant vessels. Special provisions were made for "the crews of vessels in foreign . . . trade and . . . crews of sea-going private vessels of all kinds, except yachts, under the American flag, even though these crews have homes on shore."11 The officers, however, were to be enumerated at their homes on land. 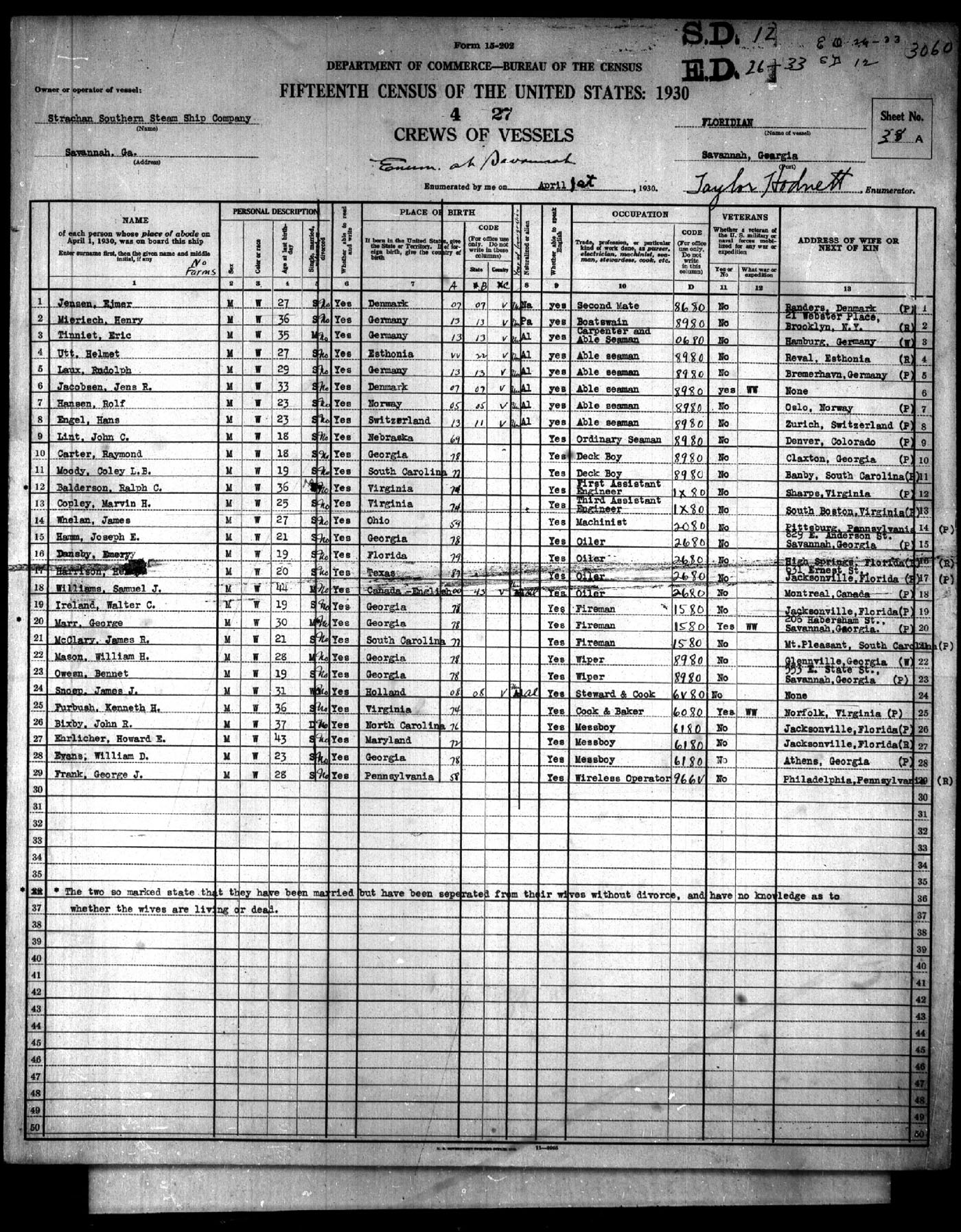 The Floridian, out of Savannah, Georgia, was owned by the Strachan Southern Steamship Company. A note at the bottom of this page from the 1930 census indicates that Ralph C. Balderson and George Marr state they have been married but have been separated from their wives without divorce, and have no knowledge as to whether the wives are living or dead. (Records of the Bureau of the Census, RG 29) 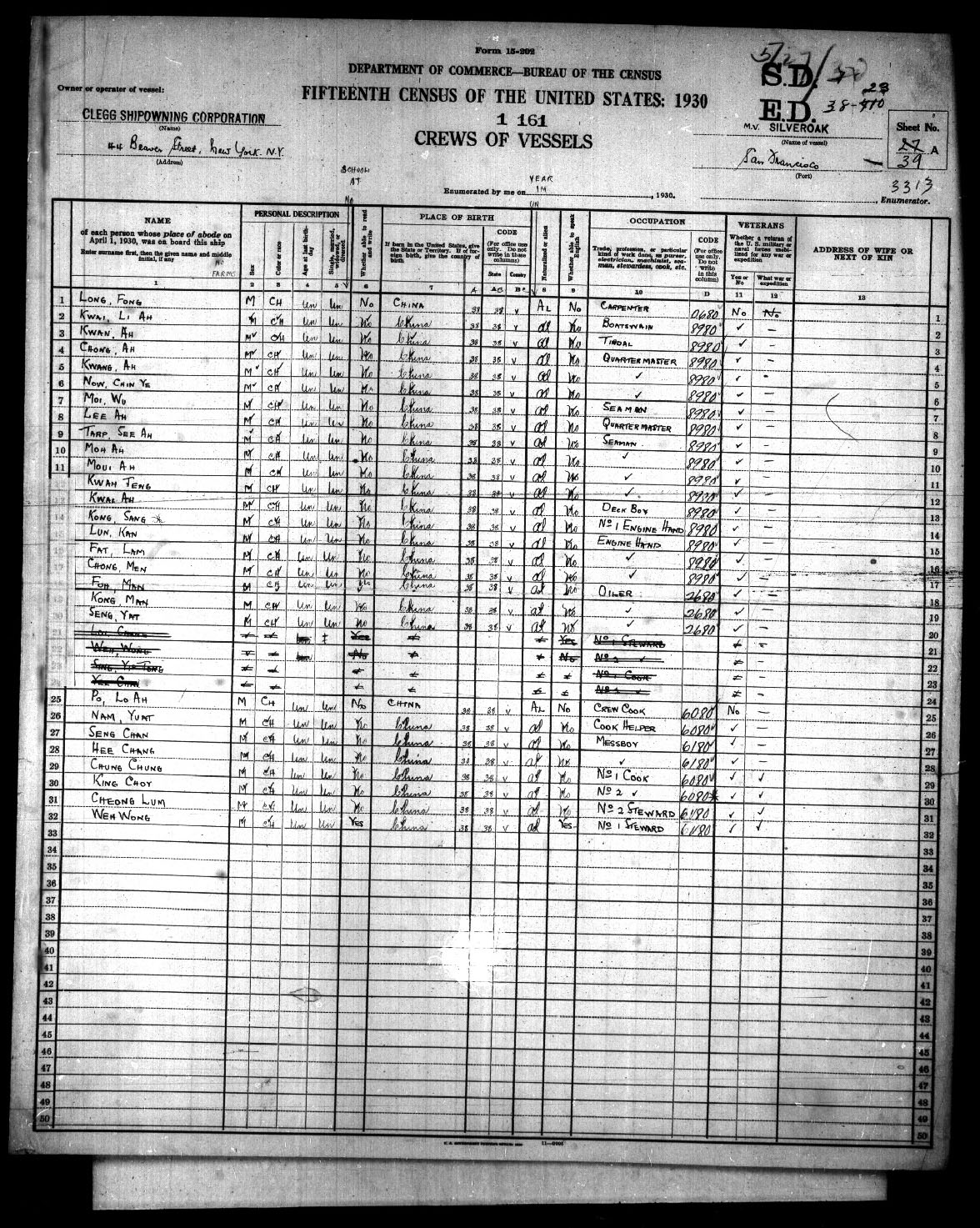 The crew members of the M.V. Silveroak were all from China and all aliens. Because of the Chinese Exclusion Act, these men could not become United States citizens until the repeal of the act in 1943. The Clegg Shipowning Company at 44 Beaver Street, New York, owned the ship in 1930. (Records of the Bureau of the Census, RG 29)

Documentation of Americans living overseas is scant, and frequently all that remains is statistical information found in the census reports. It is important to remember that the records of that census may not have survived.

Note that people counted as living abroad were working for the federal government either in a civilian or military capacity, with the exception of American Red Cross staff in Europe in the 1920 and 1930 censuses. Although people living overseas were counted in the census, they were not used for apportionment. There is always the chance that an American overseas was counted twice; once in the overseas count and again at his or her home in the United States.

1 This article is based on Americans Overseas in U.S. Censuses (Bureau of Census Technical Paper 62, 1993) by Karen M. Mills. This article follows the general outline of the paper but also includes information from census population schedules.