"I must have cried a bowl full of tears."
—Chinese immigrant Lee Puey You, recalling her 20 months detained on Angel Island.

"I would also find it impossible to live in a country where all my family have been killed."
—Richard Arvay, a refugee from Austria, describing why he did not want to return there after World War II.

One came with plenty of money; another carried only a handful of belongings. One was a visitor; another was a citizen returning home. One had her papers in order; another brought false documents hoping to find a new life.

All of these men, women, and children left likenesses and traces of their journeys to America's entryways. Entering, leaving, or staying in America—their stories were captured in documents and photographs that were attached to government forms. 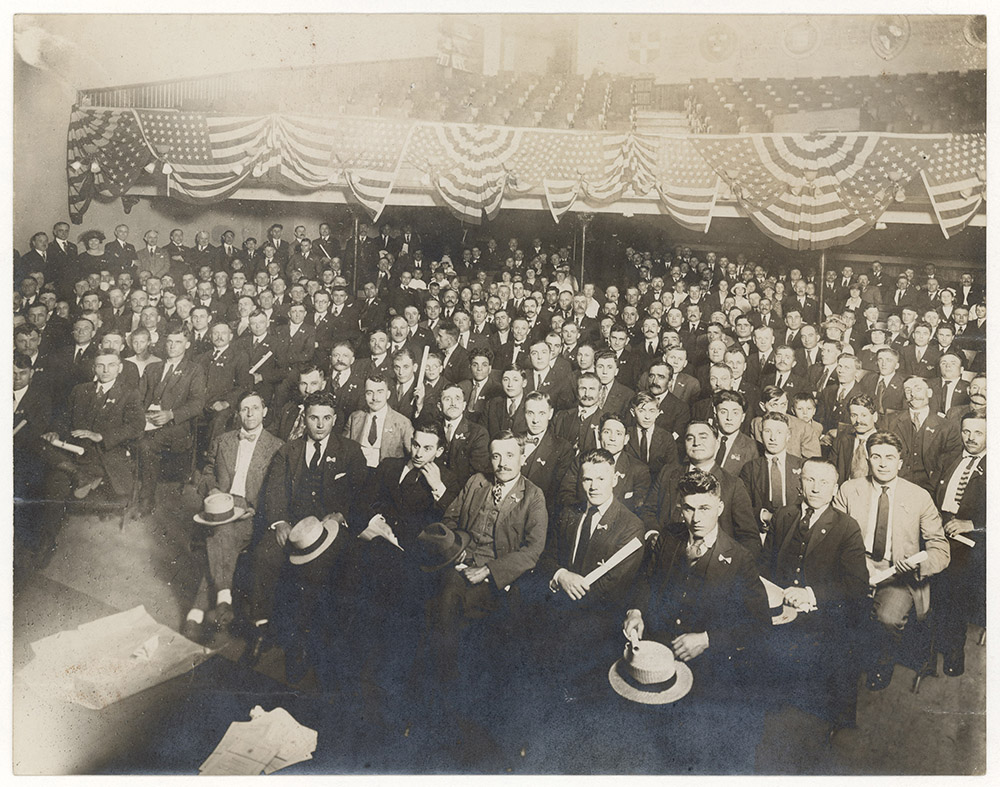 Enlarge
Recent graduates from an Americanization class in Trenton, New Jersey, display their diplomas in 1921. Such classes were one way immigrants sought to assimilate into American life. (Records of the Immigration and Naturalization Service, RG 85)

A new National Archives exhibition in Washington, D.C., "Attachments: Faces and Stories from America's Gates," draws from the millions of immigration case files in the Archives to tell a few of these stories from the 1880s through World War II. It also explores the attachment of immigrants to family and community and the attachment of government organizations to immigration laws that reflected certain beliefs about immigrants and citizenship. These are dramatic tales of joy and disappointment, opportunity and discrimination, deceit and honesty.

Attachments is organized into three sections: "Entering," "Leaving," and "Staying." As visitors enter the exhibition, they will walk by a large (8 feet by 26 feet) photomural of Angel Island, the main processing station on the West Coast, especially for Asian immigrants. They then pass through large gates embedded with photographs and documents from the exhibition. Each case will feature a large photograph of the individual whose story is told.

Entering America meant being able to join a spouse or parent; it meant a chance to marry, start a business, pursue an education, and bring family members to the United States. For U.S.-born Asian Americans returning to their birthplace, it was a test of their citizenship. For those escaping religious or political persecution, the outcome of their immigration application could mean life or death. The records in "Attachments" reveal that the answer to the question of who could pass through America's gates and be allowed to join our national community often depended on such factors as where a person was from, race and gender, and when and where the person tried to enter. 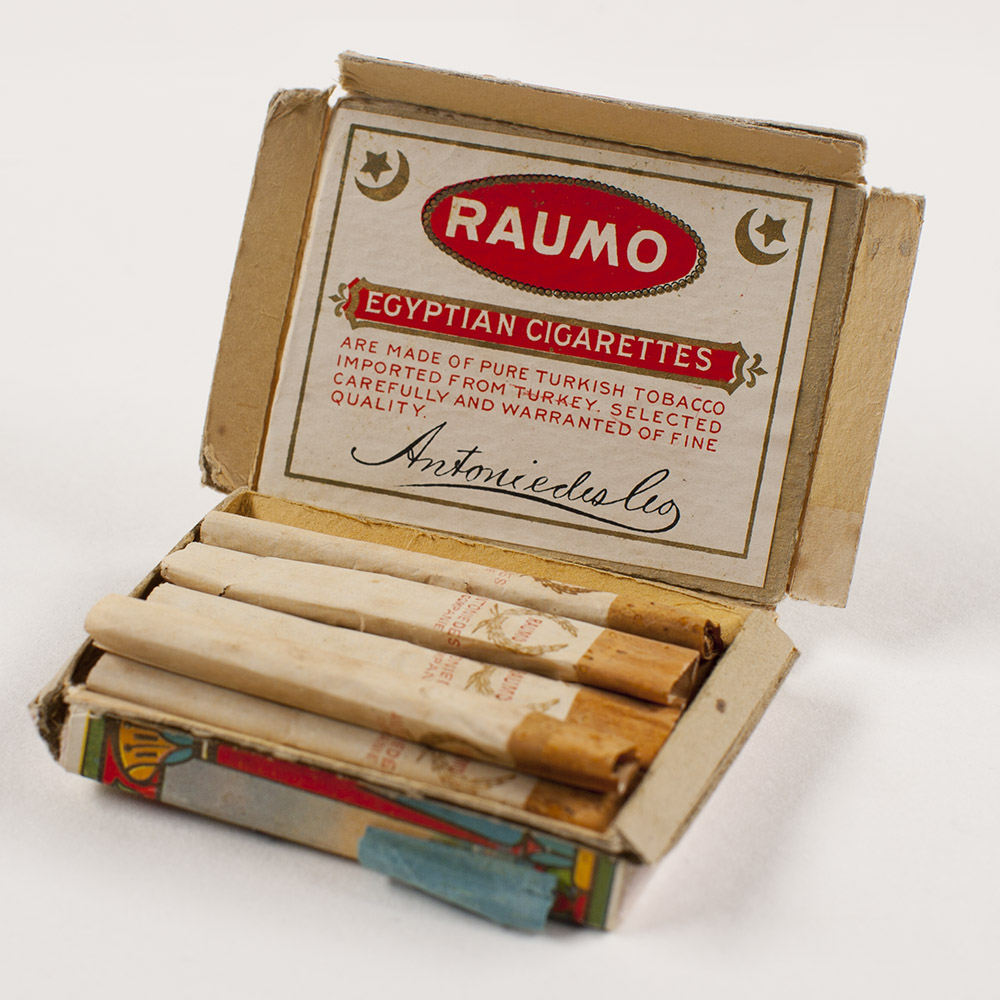 Enlarge
This package of Raumo Egyptian cigarettes from about 1914 contained a coaching note in Chinese. Such notes were sometimes smuggled to Chinese immigrants held on Angel Island so that their interview answers would match those of their friends and family. (Records of the Immigration and Nauturalization Service, RG 85)

For example, when Chun Sik On arrived in San Francisco in 1883, he had to bring a certificate proving that he was a "trader" and therefore not covered by the general ban on Chinese entering the country under the recently passed Chinese Exclusion Act. In 1927, Wong Lan Fong and her new husband, Yee Shew Ning, fashioned strategies that permitted them to enter the United States despite the commonly held belief that most Asian women were trying to enter the United States for immoral purposes. Richard Arvay, a Jewish refugee from Austria, benefited from a brief relaxation in immigration regulations that allowed him to come to the United States during World War II. When faced with the possibility of having to go back to Austria after the war, he wrote, "I would also find it impossible to live in a country where all my family have been killed."

Americans see their country as "a nation of immigrants"—a place to get a fresh start and a chance to make a new home. Millions who came here found freedom and opportunity, if not for themselves, then for their descendants. 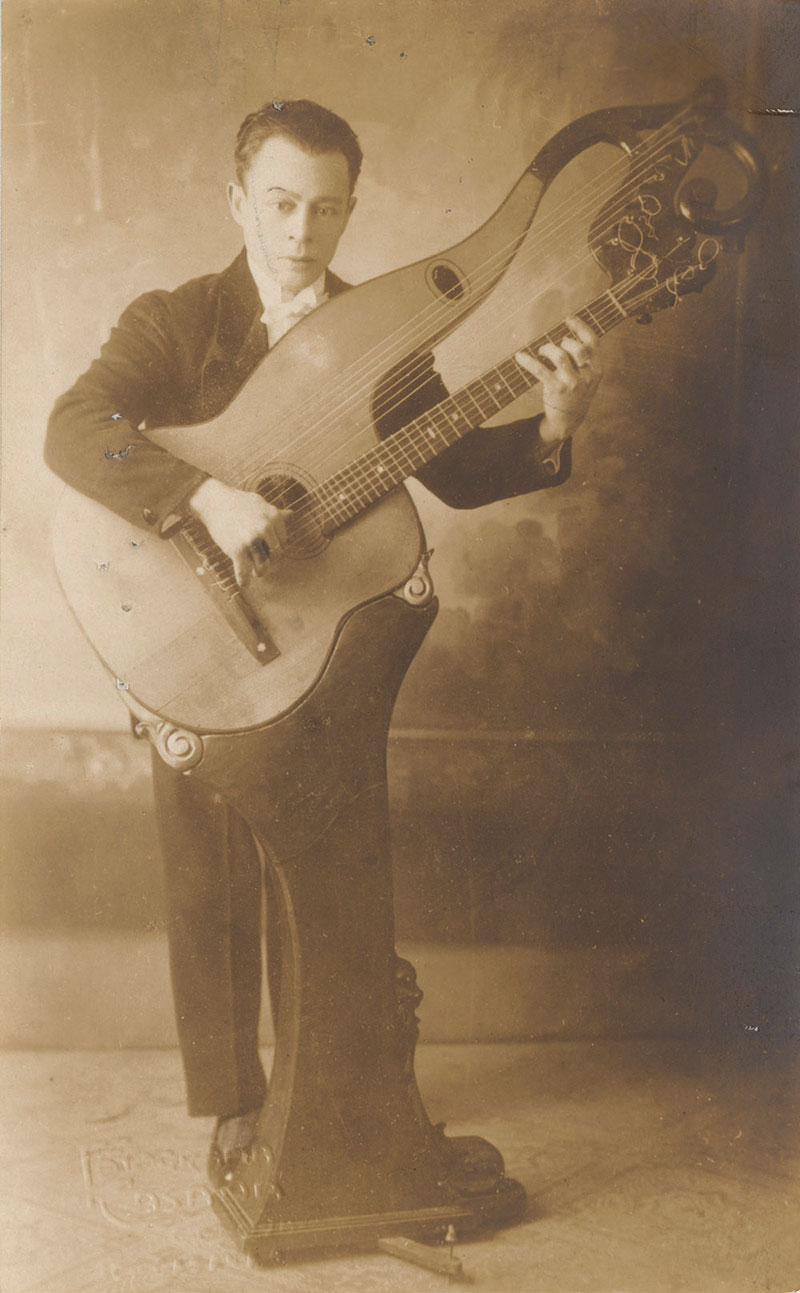 Enlarge
Pasquale Tarrafo, a noted harp guitarist, visited the United States three times in the 1920s and 1930s. He was critically acclaimed as the Paganini of the guitar â€”a reference to the legendary Italian violinist NiccolÃ² Paganini. (Records of the Immigration and Nauturalization Service, RG 85)

But others who came to America's gates could not enter, and some who entered later decided to return or were sent home. For some, leaving was part of their original plan—to make money on a temporary sojourn or to simply visit the United States. For others, tragedy, a criminal past, or injustice drove them away. Immigrants who wanted to enter but failed to qualify because of laws or regulations were cut off from their dreams. Even those who crossed America's threshold were subject to government control and deportation if, as aliens, they committed a crime, supported an unpopular political cause, or violated a regulation.

Mary Yee, a white woman born in Michigan, "became" Chinese in the eyes of the law when she married Yee Shing. As the couple prepared to leave the United States in 1922 to educate their children in China, they had to certify her right to return to the United States using a form designed for a "lawfully domiciled Chinese Laborer."

Lee Puey You, a Chinese woman, came to America in 1939 posing as the daughter of a man already admitted. She spent 20 months on Angel Island before being deported and remembered her time in detention bitterly, saying that she "must have cried a bowlful of tears," there.

Kim Ok Yun, a Korean nationalist, fled from the Japanese occupying her homeland. She spent a few years in college in the United States during the 1930s but then returned to Korea and resumed her political activities until she was arrested and probably executed. 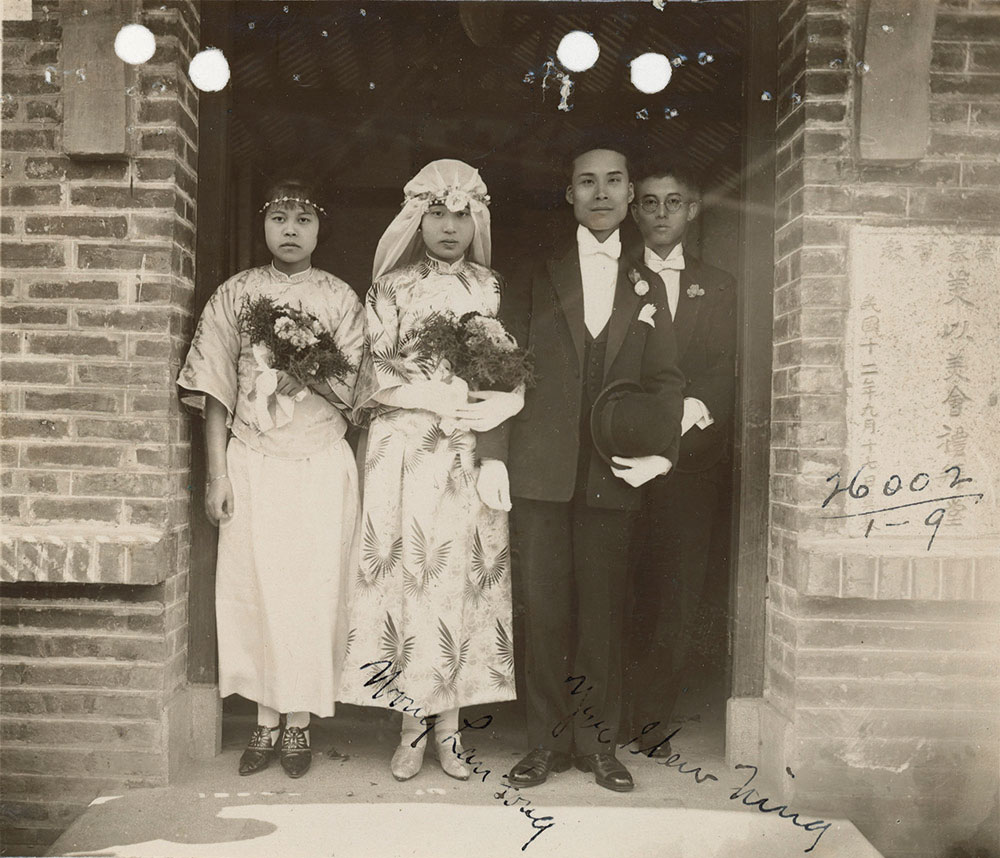 Enlarge
A 1926 wedding photograph of Wong Lan Fong and Yee Shew Ning is part of Wong s immigration file held at the National Archives at San Francisco. The file also contains a letter from the minister who married the couple, attesting to their good character. (Records of the Immigration and Nauturalization Service, RG 85)

Coming to America meant leaving behind the familiar. And while not all immigrants chose to stay, those who did faced both opportunities and challenges in making a life in a new land. Feelings of loss and nostalgia over what was left behind mixed with the thrill of greater freedom and the chance to begin anew. The safety and comfort of associating with compatriots from "the old country" competed with a desire to demonstrate loyalty to new communities and a new nation. American ideals of inclusion, democracy, and individual rights faced off against the reality of prejudice, discrimination, and stereotyping.

Mary Louise Pashgian came to the United States fleeing persecution in Armenia. After Michael Pupa's parents were killed by the Nazis, he spent two years hiding in the Polish forests; he eventually came to the United States and was raised by a family in Cleveland, Ohio. Kaoro Shiibashi, who was born in Hawaii, was taken to Japan as a toddler. In the 1930s he decided, "I wanted to see my native land," and he returned to the United States. Despite his Hawaiian birth certificate, he was initially refused entry. Eventually admitted, he spent the rest of his life in the United States, including a stay at the Heart Mountain internment camp in Wyoming during World War II. 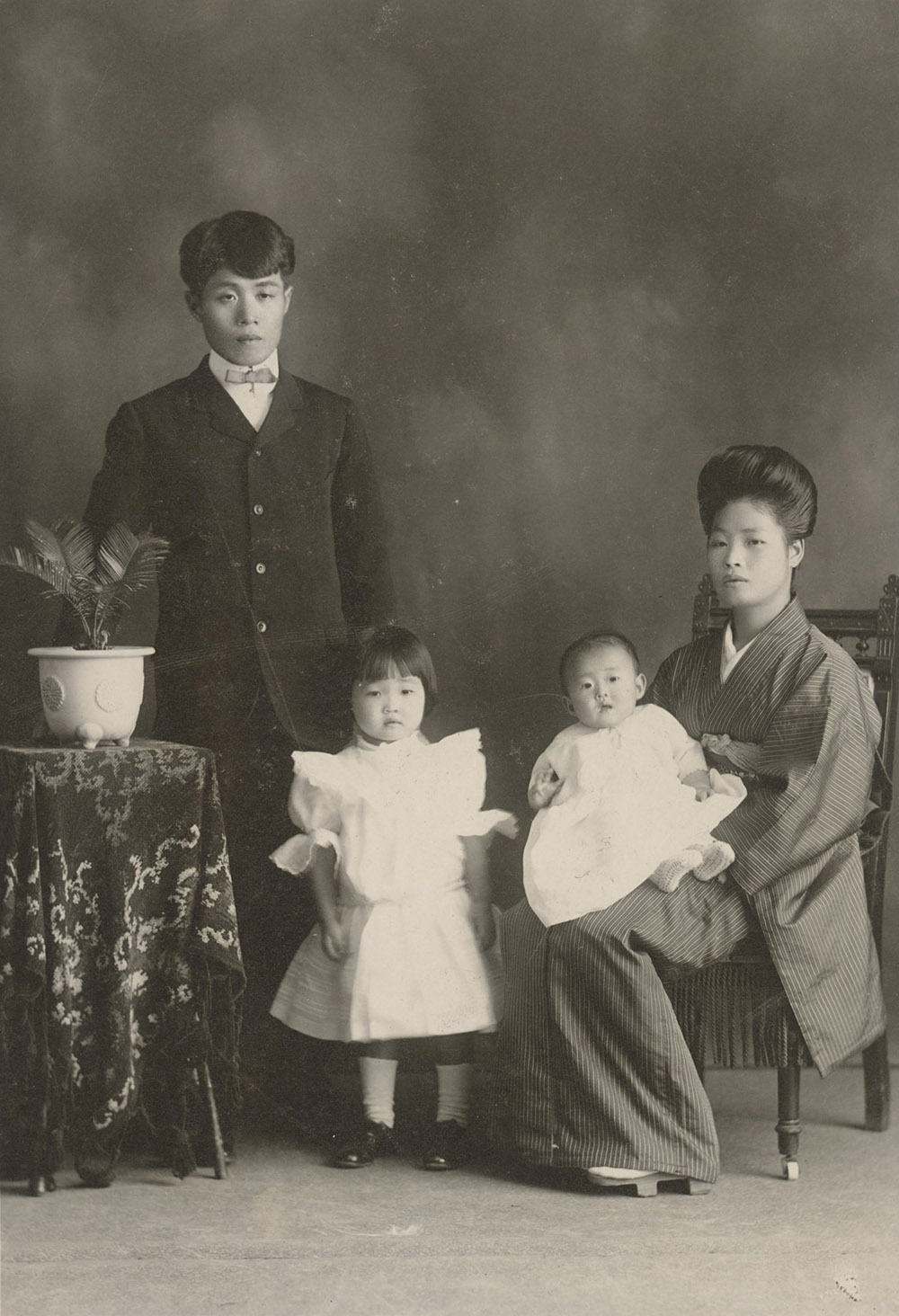 Enlarge
Kaoru Shiibashi submitted his family portrait showing him as an infant as well as his Hawaiian birth certificate as proof of his U.S. birth. Immigration inspectors initially refused to allow him to return to the United States from Japan, but he later won entry. (Records of the Immigration and Nauturalization Service, RG 85)

All these details—the inspiring and uplifting as well as the mundane and heartbreaking—are recorded in the documents presented in "Attachments." The documents themselves represent a kind of a gateway—a gateway to America's immigrant past and a gateway to understanding its complexity.

"Attachments: Faces and Stories from America's Gates" was in the Lawrence F. O'Brien Gallery at the National Archives Building in Washington, D.C., from June 15, to September 4, 2012. The Foundation for the National Archives published an illustrated catalog in association with D. Giles, Ltd. To order the catalog, call 202-357-5271 or write to nationalarchivesstore@nara.gov.