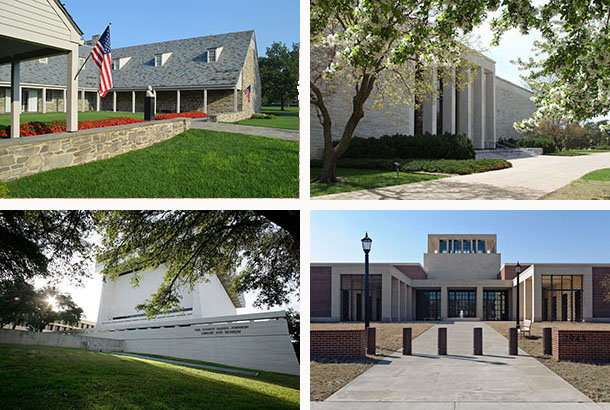 As the National Archives prepares to add its 14th presidential library, we can point with pride to 13 libraries that preserve and make available the Presidents' work and the history of their times.

President Barack Obama's library in Chicago will follow the George W. Bush Library in Dallas, but our Presidential libraries haven't always grown in the same order that the Presidents served in the Oval Office.

Before Franklin D. Roosevelt's presidency there was no law, or even guidance, governing presidential records. Presidents simply took their papers with them. Some were kept; others were destroyed. In 1938 Roosevelt proposed a presidential library, built with private funds, with all the records of his administration in one place, and run by the National Archives. Congress approved FDR's plan, and his library opened in 1941.

All of FDR's successors, as well as his predecessor, did similarly, but not in chronological order. Roosevelt's successor, Harry S. Truman, intended to follow suit, but there was no law in place for the transfer of the libraries to the U.S. Government—the 1939 legislation pertained only to FDR. As Truman moved ahead, the 1955 Presidential Libraries Act, which allowed presidential libraries, papers, and memorabilia to be transferred to the federal government, made its way through Congress.

Both the Truman and Dwight D. Eisenhower libraries came in under the act's provisions in 1957 and 1962 respectively. However, the fourth presidential library was not for Eisenhower's successor, John F. Kennedy, but for Herbert Hoover—FDR's predecessor. Hoover opened his library in 1962 at his birthplace in West Branch, Iowa.

In Boston and Cambridge, Massachusetts, the debate over the location of the Kennedy Library went on for years. Meanwhile, Lyndon Johnson opened his library at the University of Texas in Austin in 1971.

Then Watergate happened. Because the Presidential Libraries Act did not require a President to donate his papers, there was nothing stopping him from not doing so. After Richard Nixon resigned, he attempted to destroy some of his materials, most notably his extensive audio recordings. To prevent this, Congress passed legislation seizing Nixon's materials and mandating that the National Archives process them for public access.

Then in 2007, the private Nixon Foundation agreed to transfer to the U.S. Government the private Nixon Library it had opened in 1990 in Yorba Linda, California. Now, all the Nixon papers that had been housed at College Park, Maryland, have been transferred to this facility.

When the Obama Library opens in a few years, the presidential libraries will house a continuous record of the American presidency and life in America from 1929 to 2017.

You can find a list of all our locations inside the back cover of Prologue, or visit our website to find a National Archives near you: www.archives.gov/locations/.