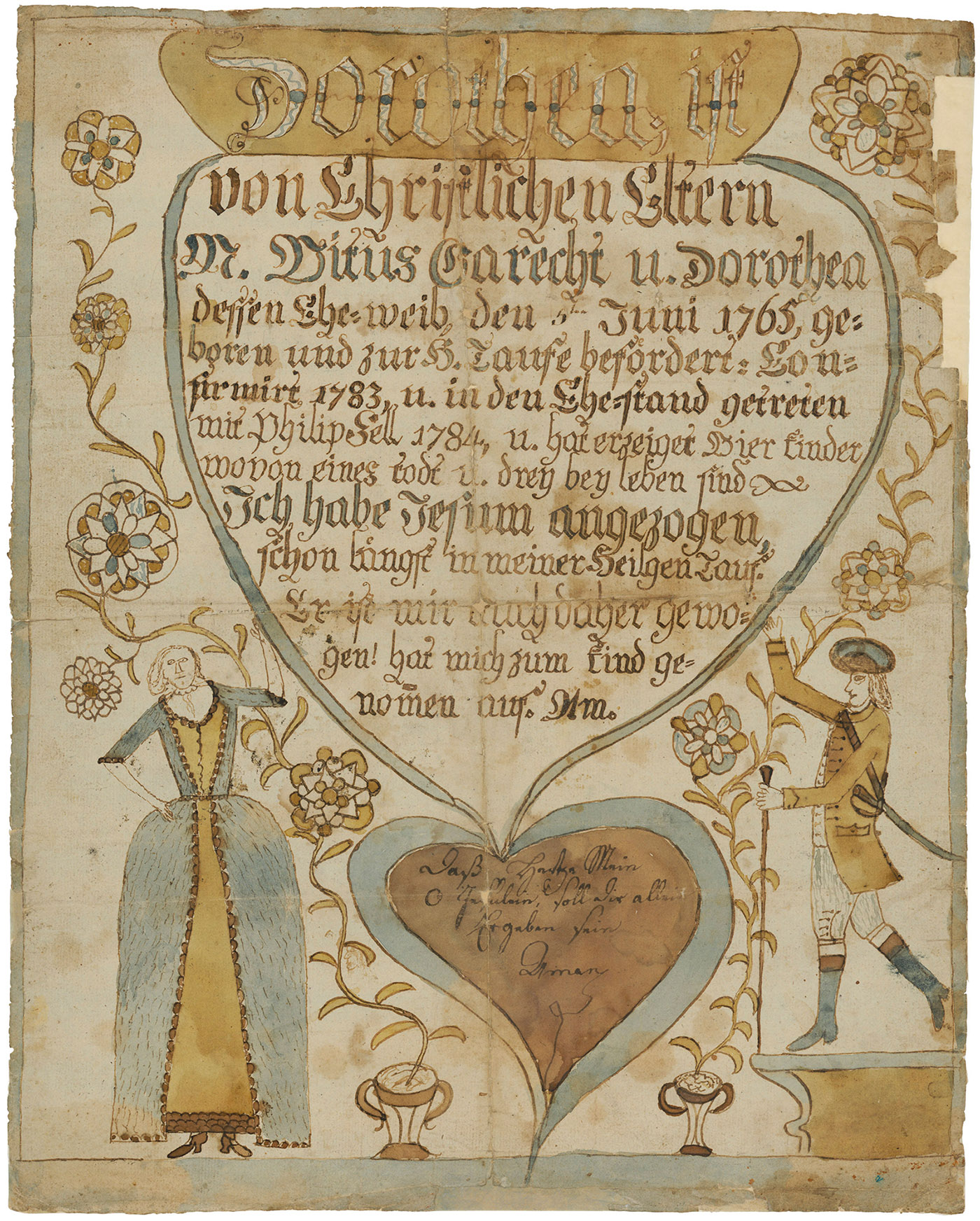 Revolutionary War pension files can be a gold mine of information for genealogists searching for ancestors from the era of the nation's birth.

Take, for example, Daniel Ide, a member of the prolific Ide family of Massachusetts.

Daniel Ide was born in Westminster, Vermont, in 1783.1 A published genealogy of the Ide family lists an Ichabod Ide who lived in Westminster, Vermont, in the mid-1700s. Ichabod had many sons who could have fathered Daniel, but there is no Daniel listed in any of the family groups for Ichabod's children.2 A search of the Vermont vital records microfilm also failed to find a Daniel Ide other than his death record and birth records of his children.

There are quite a few pension files for the Ide family of Massachusetts, and fortunately for our search for Daniel, there is one for Israel Ide, one of Ichabod’s sons. At first glance, a researcher might not consider this pension file because Israel served from Massachusetts. The pages within, however, show that Israel came from Westminster, Vermont, to Cambridge, Massachusetts, where he signed on with Captain Wood's Regiment. Israel's brother Ichabod and several cousins were already serving in Wood's regiment. Almost at the end of the file is an affidavit from one Daniel Ide, who stated:

I, Daniel Ide of Coventry in the County of Orleans and State of Vermont aged fifty six years depose and say that I am a Son to Israel and Martha Ide who formerly lived in Westminster in this State and afterwards lived in Coventry aforesaid—I further State my Father the said Israel Ide died on the 9th day of October 1822 since which my Mother the said Martha Ide has ever continued a Widow.3

Daniel swore to the affidavit on March 1, 1839. His age of 56 years at the time gives us a birth year of 1783, which matches the age listed on his death record. With the connection made between Daniel and Israel, it is now possible to trace the Ide family back to the original immigrant, Nicholas Ide, who was born about 1620 in Ide, England, and died in Rehoboth, Massachusetts, in 1690.4

Not every Revolutionary War soldier received a pension. And the pension and bounty-land warrant application files contain mostly the records of enlisted men, not officers. The first pension act, enacted on August 26, 1776, allowed pensions for soldiers and sailors who had been injured in the service of the colonies and were therefore incapable of earning a living.

Congress Offers Incentives to Stay in Until War's End

To encourage officers and enlisted men to serve for the duration of the conflict, the Continental Congress passed a resolution on May 15, 1778, allowing half-pay for all officers and a set gratuity of $80 to all enlisted men who remained in service to the end of the war. On August 24, 1780, the Continental Congress passed the first act offering pensions to widows and orphans of Revolutionary War soldiers.

During the war, pensions were used to encourage enlistment and acceptance of commissions and to prevent desertion and resignation. After the war, they became a form of reward for services rendered. States as well as the federal government offered and awarded pensions based on participation in the Revolutionary War. However, the Revolutionary War Pension and Bounty-Land Warrant Application Files in the National Archives (Microfilm Publication M804) contain only the records of pensions granted or paid by the U.S. federal government.

Not until 1818 did Congress pass a pension law granting pensions to Revolutionary War veterans who had not been disabled. These pensions, based on financial need, were granted for life. When a larger-than-anticipated number of applicants led to financial difficulties for the young nation, Congress amended the 1818 law in 1820 and again in 1822. The most liberal pension legislation, enacted in 1832, gave full pay for life to officers and enlisted men who had served for two or more years and partial pay for service of six months to two years.5

A fire in the War Department on November 8, 1800, apparently destroyed all Revolutionary War pension and bounty land warrant applications and related papers submitted before that date.6 The pension files now in the National Archives were filed after 1800 and contain either a 10-by-14-inch envelope (if the pension paperwork still exists) or a 10-by-14-inch card summarizing the information about a claimant (if the pension no longer exists). An envelope may contain from 1 to 200 (or more) pages of records. A typical file contains around 30 pages of records, consisting of an application or applications of one or more claimants (veteran [designated the survivor], widow, orphan, etc.); other documents submitted as evidence of identity and service; and papers showing actions taken by the government concerning the claim(s).7

Survivors' pension envelopes have headings containing the name of the state or organization in which the veteran served, his name, other names he was known by, and the letter S (for survivor) followed by a file number.

The file may contain affidavits testifying to the veteran's service or claimed disability; documentary evidence of service submitted by the applicant, such as a commission or discharge certificate; printed briefs summarizing the claimed service; property schedules; certified copies from state officials verifying the applicant's service record; letters from attorneys, congressmen, and other interested parties relating to the progress of the application; and letters from genealogists and researchers seeking information with responses from the Pension Office, the Bureau of Pensions, or the Veterans Administration.8 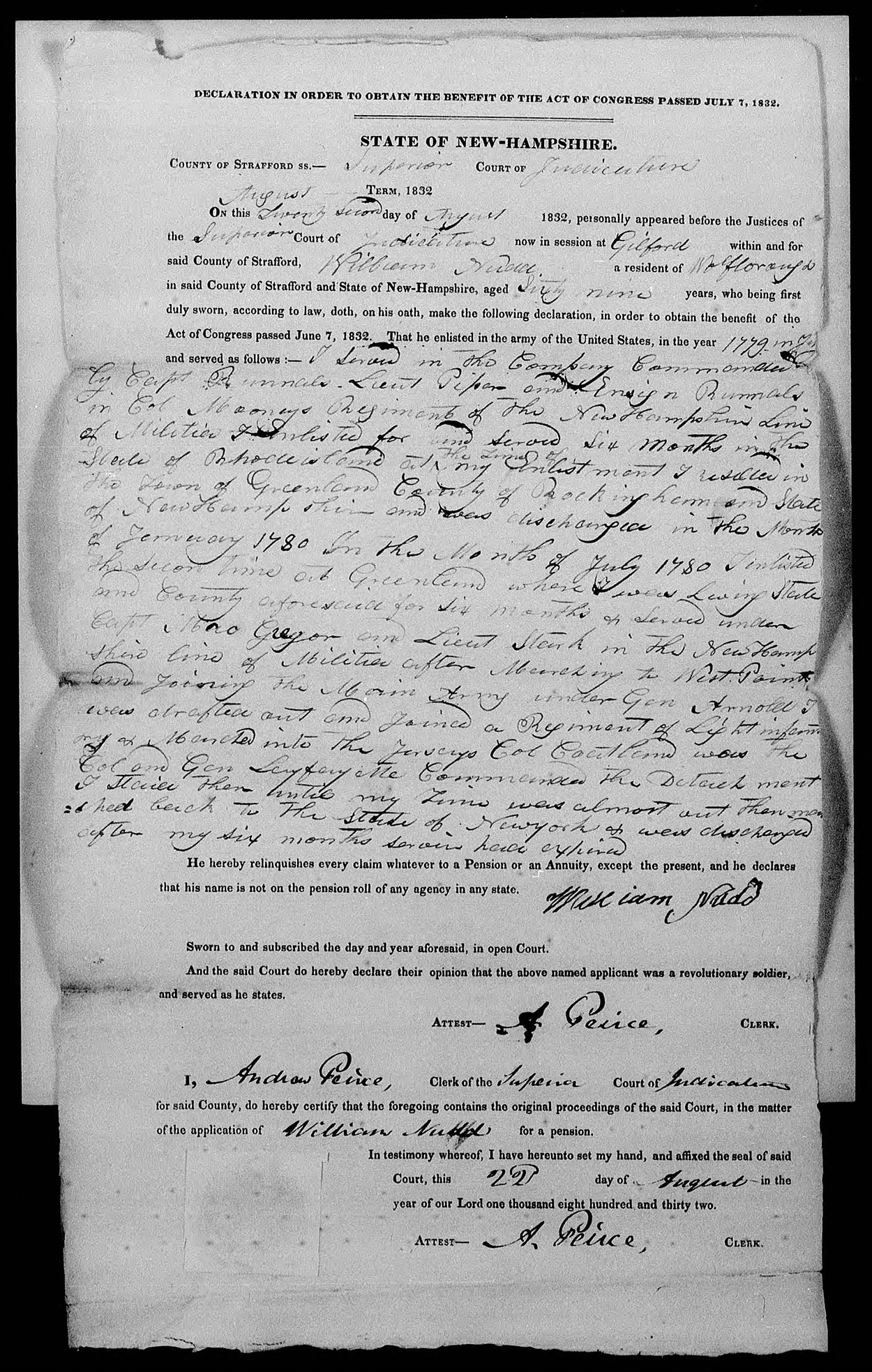 An example of a survivor’s pension is that of William Nudd, pension number S11151. His file contains a card that notes the pension roll where his pension was recorded and includes information on his service as a private in Colonel Mooney's Company, in the New Hampshire line. According to the card, he received a pension of $35.44 per annum, and his certificate of pension was issued on November 12, 1832, and sent to S. I. Tibbets, of Ossipee, Strafford County, New Hampshire. The file also includes a Declaration in Order to Obtain the Benefit of the Act of Congress passed July 7, 1832, which lists William's age as 69, and specific information on his Revolutionary War service: enlistment at Greenland, New Hampshire, and several six-month enlistments and stations in Rhode Island, New Jersey, and New York. The file also contains a preprinted form, "Brief in the Case of, " which asks questions about the veteran's age and in what battles he was engaged. Affidavits from William's long-time acquaintances giving support for his case are also present. By pension standards, his file, at around a dozen pages, is quite a small one.9

Widows' pension application files envelopes have headings for the state or organizations in which the veteran served; his name and his widow's name; and the letter W (for widow) followed by the file number. Only the widow's given name will appear on the envelope unless she remarried, in which case her new surname will be included with the notation "Former Widow." The file may contain records normally found in the survivor's file, especially if the file consolidates both the survivor's application and the widow’s application.

A veteran's pension application normally gives his age or date of birth, his residence, and sometimes his birthplace. Property schedules often give names and ages of a veteran’s wife and children. The application of a widow seeking a pension or a bounty-land warrant may give her age, residence, maiden name, date and place of marriage, and the date and place of her husband's death. In some widows' pension application files is a copy of a marriage record from the town clerk, a clergyman, or a justice of the peace as proof of marriage. Sometimes family-record pages from Bibles and other books were also submitted by a widow as proof of marriage.10

Revolutionary War Files Among Easiest to Use

Rosilla Hill, widow of Jonathan Hill, filed for a pension (application number W16291) based on her husband's service. While his service was from Massachusetts, Rosilla filed for a pension in Winchester, New Hampshire. The file includes a card listing the state roll where Rosilla was recorded with the annual payment of $99.55. 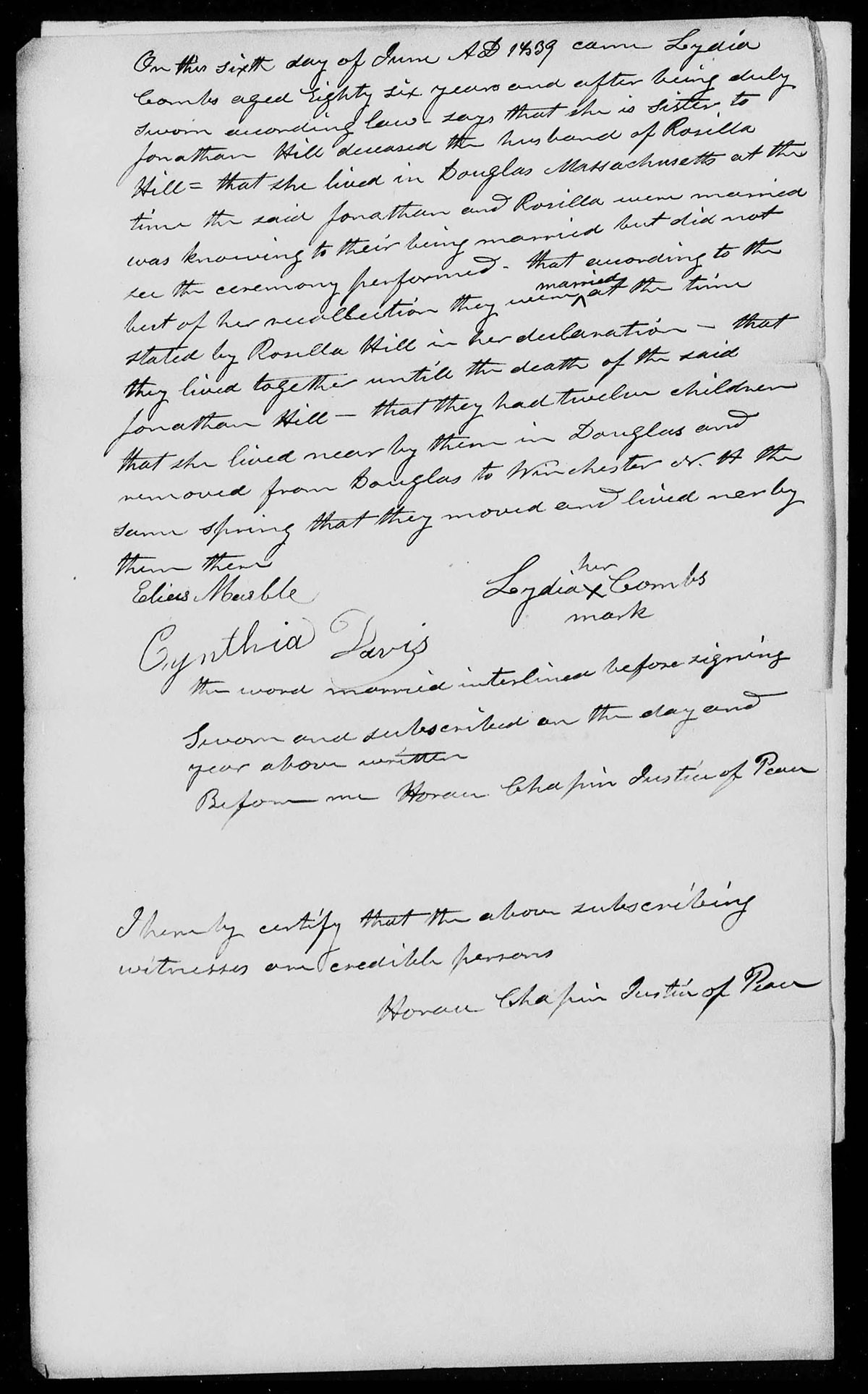 Lydia Coombs's affidavit provides information about her brother, Jonathan Hill, stating that he was married to Rosilla and that they had 12 children. (National Archives Identifier 54876474)

Affidavits in the folder include one from Lydia Coombs, who stated that she was the sister of Jonathan Hill; that she lived in Douglas, Massachusetts, at the same time Jonathan and Rosilla were married, although she did not attend the ceremony; that Rosilla and Jonathan had lived together until his death; and that they had 12 children. Rosilla's declaration states that she is a resident of Winchester, New Hampshire; that Jonathan was a soldier in the first eight months of 1775; that they were married in May 1775 at Douglas, Massachusetts, by Elder Adam Stracter; that Jonathan was a substitute for Benjamin Robbins of Douglas and a one-month substitute for George Brown of Colcester, Rhode Island; and lastly that Jonathan died in Winchester, New Hampshire, on November 26, 1830.

An affidavit from William Dudley, town clerk of Douglas, Massachusetts, states that he was unable to locate in the town records any evidence of a marriage between Jonathan Hill and Rosillah Combs. However, he did find the intention of marriage for them published in Douglas on July 15, 1776. There are several letters of inquiry in the file and responses from the War Department. The file also states that Rosilla was 80 years old when she received her pension in 1839 and that Jonathan received a Bounty Land Warrant #4339, issued February 23, 1797, and given to William Blanchard.11

The Revolutionary War pension and bounty-land warrant application files contain many 18th-century documents such as commissions, discharges, deeds, wills, diaries, journals, muster rolls, newspaper clippings, letters, marriage certificates, and family bible pages. These documents are too numerous for the National Archives to inventory and describe them all. Approximately 70 journals, diaries, and account books in the records have been inventoried, however, and a detailed descriptive list was compiled and printed in the descriptive pamphlet for Microfilm Publication M804.12

Most of the inventoried items were written by the veteran, but some were written by fathers, wives, daughters, or sons of veterans. The time span of these items is from as early as 1685 and as late as 1853, but most items date from 1774 to 1781. The value of these items is more for the soldiers' perspectives than for genealogical information. The veterans included in this inventory are from 10 states:

Revolutionary War pension application files have much to offer genealogists. If you have lost track of a family around the Revolutionary War, like the Ide family in Vermont, these records might connect your line as it connected Daniel and Israel. The Hill file also connected Jonathan Hill and Rosilla Coombs to Douglas, Massachusetts, and provided the information needed to find their parents. The amount of material in each file varies, but if you are lucky, you can find valuable insights into the veteran's life and his family.

Jean Nudd is an archivist with the National Archives. She is an avid genealogist and lectures frequently on using federal records and doing genealogy. She has given presentations to the Federation of Genealogical Societies in Boston, New England Regional Genealogical Conferences, and the Ohio Genealogical Society's annual conference, among many others.