The National Archives’ Role in Amending the Constitution 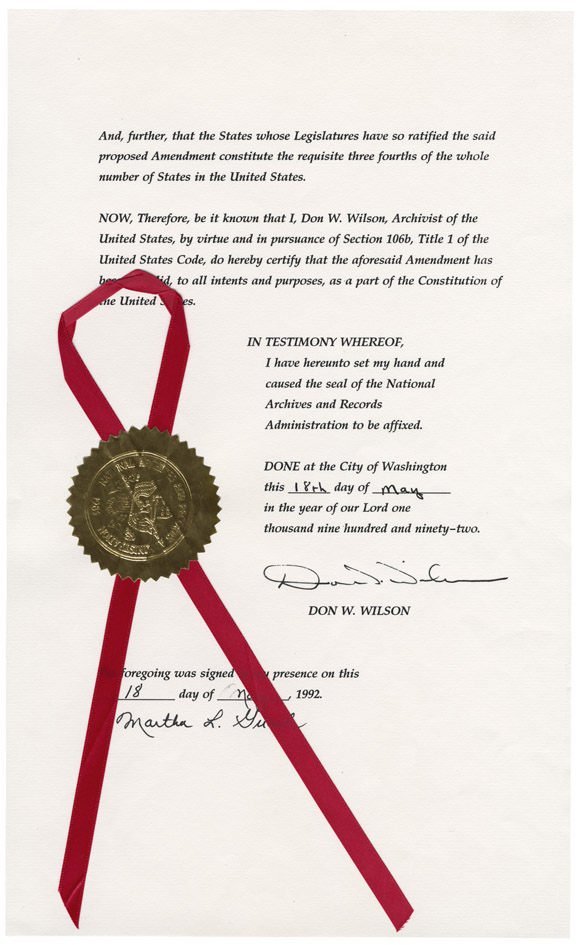 The 27th Amendment, first proposed in in 1789 and ratified in 1992, is the only constitutional amendment to be certified by the Archivist of the United States. (National Archives, RG 11)

Twenty-five years ago in a small ceremony in his office, Archivist of the United States Don W. Wilson became the first and so far only Archivist to certify a constitutional amendment.

As one of his many responsibilities, the Archivist manages the constitutional amending process.

This process includes submitting amendments that Congress has proposed to the states for ratification, collecting state ratifications, and certifying amendments as part of the Constitution once three-fourths of the states ratify them. The Office of the Federal Register assists the Archivist with this task.

When Wilson certified the 27th Amendment to the Constitution, which limits Congress’s ability to change its pay until the next term, his actions were somewhat controversial—given the length of time between the amendment’s proposal and its ratification. It was first proposed on September 25, 1789, as part of the original slate of amendments that eventually became the Bill of Rights.

Six states initially ratified it—not enough to reach the three-fourths bar. The amendment was then largely forgotten until 1982, when a college student, Gregory Watson, started a campaign to have it ratified. By May 7, 1992, enough states had passed the amendment to make it part of the Constitution.

Some members of Congress expressed concern about the legality of an amendment that had been proposed over 200 years ago and thought the Archivist should seek congressional approval before signing. Wilson’s response was that it was unnecessary because the votes by three-fourths of the states—not his signature—added the amendment to the Constitution. Congress subsequently, and unnecessarily, passed resolutions validating the amendment.

You can see Wilson’s certification of the 27th Amendment in the “Amending America” exhibit at the National Archives Museum in Washington, D.C., until September 4, 2017.