Anne Kerny wailed and moaned as the Garrick sailed to America during the worst winter of Ireland’s Great Famine. Somewhere in the Atlantic, before the ship reached New York City on January 20, 1848, the cries of the baby she delivered also filled the steerage compartment.

Bridget Kerny was not the only newborn of the 40-day journey from Liverpool.1 The Garrick was nearly a nursery, with 33 children born at sea among the 478 aboard, according to the Famine Irish Passenger Record Data File held at the National Archives and Records Administration (NARA). Two of the babies died before the ship nudged the dock.

[Read about how to access online Passenger Arrival Data Records]

The online database shows 8,075 births at sea among more than 410,000 Irish passengers to arrive in New York from January 1846 through December 1851, the teeth of the Famine years. Of these newborns, 452 died, among 2,883 total reported fatalities. That’s a nearly three-to-one ratio of births-to-deaths, and an extra 7,623 passengers who did not embark from Irish or English ports.

Up to two million Irish sailed to North America during the Famine. An estimated 5,000 ships made the crossings, which could last up to two months. Many were cargo vessels hastily outfitted with makeshift passenger accommodations. Tens of thousands of starving, disease-weakened immigrants died in the dark holds of what came to be known as “coffin ships.”2 Among those who survived the journey, more died at dockside quarantine stations, most notoriously at Grosse Île, Québec, Canada.

In April 1847—“Black ’47”—Anglo-Irish Member of Parliament and immigrant advocate Stephen De Vere voluntarily traveled to Quebec in steerage to observe the typical conditions. This passage of his report is frequently quoted by historians, and it notes the presence of newborns: “Hundreds of poor people, men, women and children, of all ages from the drivelling idiot of 90 to the babe just born, huddled together without light, without air, wallowing in filth, and breathing a foetid atmosphere, sick in body, dispirited in heart.”3

The nearly 8,100 children born at sea outnumber the 5,507 infants age one month up to one year old in the database. This group includes 160 one-month-old passengers; 231 age two months; and 399 at three months. Perhaps the born-at-sea designation included some newborns smuggled aboard ships by their desperate mothers.

Two well-known 19th-century writers observed Irish women and their infants as they waited to board ships on the crowded Liverpool waterfront. Herman Melville in 1849 wrote of “puny mothers holding up puny babies.” Nathaniel Hawthorne in 1853 described “ragged, pale . . . women nursing their babies on dirty bosoms.”4

As for the most elderly immigrants, the NARA database yields eight passengers age 90 (Johanna Walsh aboard Home in January 1851) to 98 (Michael Callaghan on the Isaac Wright in July 1850). The database lists 1,683 Irish passengers of unknown age.

By far most of the babies born at sea arrived into the world as steerage passengers rather than in the more comfortable cabin class, based on the one-third of the newborn records that include compartment details. The database contains numerous examples of a ship crossing with a dozen or more births. The peak year was 1849, with nearly 2,300 total births.

“There being no physician onboard, the kind-hearted captain assumed the duties of that important functionary, assisted by two of his female passengers,” is how one New York newspaper described the shipboard birth of twin boys.5 It seems doubtful, based on De Vere’s accounts, that all deliveries were so well attended.

In Ireland, an estimated one million people died during the Famine. That so many women in the final weeks or days of their pregnancy boarded ships for the long, harrowing journey to North America only reinforces their desperate situation. 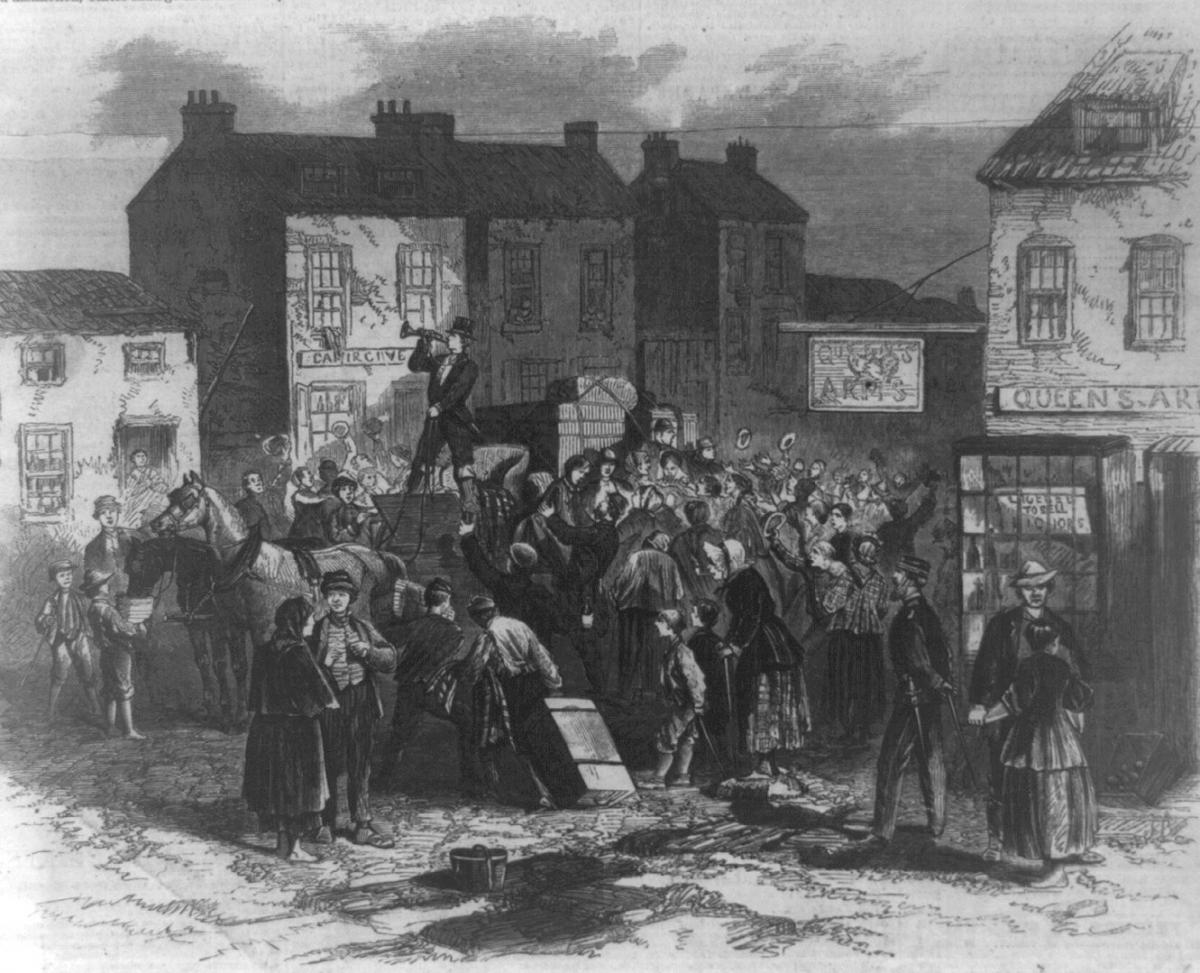 An 1866 illustration shows Irish emigrants leaving their home for America. (Library of Congress)

To be sure, births at sea were common in the 19th century, especially given the extended sailing time to North America and the maritime culture of small islands such as Great Britain and Ireland. The 1851 census for Great Britain tallied 3,198 people born at sea among a population of 21 million, but that further underscores the high number of shipboard births in the NARA database.6

Other immigrant groups also experienced shipboard births in the 19th century. In 1900, the St. Louis Post-Dispatch profiled nine adult city residents who belonged to a “Born at Sea Club.” Their mothers traveled to America from Africa, Canada, and Germany. (No Irish Famine refugees were included in the write-up.) Several told the newspaper that they never learned the name of the ship or from what port it had sailed.7

Today, the North African–European refugee crisis in the Mediterranean has put children born at sea in the news once again. Both the welfare and citizenship of these babies are among many thorny issues facing the receiving nations, if the immigrants survive the journey on vessels often of dubious seaworthiness.8

Not all of the Famine fleet were “coffin ships.” British ships sailing to Canada during the Famine typically offered cheaper fares but harsher conditions than more regulated U.S. vessels. An estimated one-third of Canada-bound passengers died on the way or shortly after arrival, compared to just 10 percent on U.S. ships.9 The NARA passenger database, with its high births and low deaths, may represent some of the healthier crossings of the period. But it probably does not account for all passengers who died—and were buried—at sea. Crews were discouraged from interring bodies overboard as ships approached the coast.

The 410,000 documented arrivals from Ireland in the database represent about one-third to one-quarter of the up to 1.5 million Irish who arrived in the United States during the broader Famine period of 1845–1855, including some who walked into the country after landing in Canada.

​Deaths of Mother and Child “Born at Sea”

Catherine Gavin was born aboard the ship Elizabeth Denison as it sailed from famine-stricken Ireland. But the baby and her mother, Margarette, 34, each died before the ship reached New York City on November 5, 1847.

Among the many hardships faced by Famine immigrants, the image of a mother and newborn baby dying together at sea is among the harshest.

The Gavins are one of the few instances in the NARA Famine Irish Passenger Record Data File with a clearly designated mother-child relationship. Other examples are based on shared surname and the same ship crossing, but the database field for “family relation” is blank. The adult women could be a relation to the baby other than the mother.

Below is a list of mothers and childen born at sea who died, with ship and arrival date. A second woman of childbearing age with the same surname is shown in one case. “U” means the name is unknown.

*Database shows the surname as “Havannah,” with an H, among several passengers named Cavannah.

The Center for Immigration Research at the Balch Institute, now merged with the Historical Society of Pennsylvania, created the Irish Famine database between 1977 and 1989. The details were extracted from ship passenger lists in the records of the U.S. Customs Service (Record Group 36). The work resulted in a set of books titled Famine Irish Collection.  In 1989 the Center for Immigration Research donated the database containing the extracted records to the National Archives.

The database is likely to contain some errors. This could have resulted from the confusion or indifference of maritime officials who recorded the passengers in the original manifests, or subsequent transfers of the information to other formats. For example, born at sea passengers aboard the same ship with the same surname but unknown first name may be either twins or duplicate entries. Some surname spellings appear to contain typos.

The number of births at sea does not diminish the horrible death toll among Irish Famine immigrants. Instead, it is a reminder of the tenacity of the living, a tribute to the care these newborns received from their mothers, other passengers and crew under the most difficult circumstances.

Mark Holan writes about Irish history and contemporary issues at www.markholan.org. His articles about Ireland have appeared in www.theirishstory.com, History Magazine, Pittsburgh Post-Gazette, and other publications.

6. The Census of Great Britain in 1851, Reprinted, in Condensed Form, From the Official Reports and Tables (Longman, Brown, Green and Longmans, London, 1854), pp. 73 and 159, via online HathiTrust Digital Library.