The Reel Story of the Great War 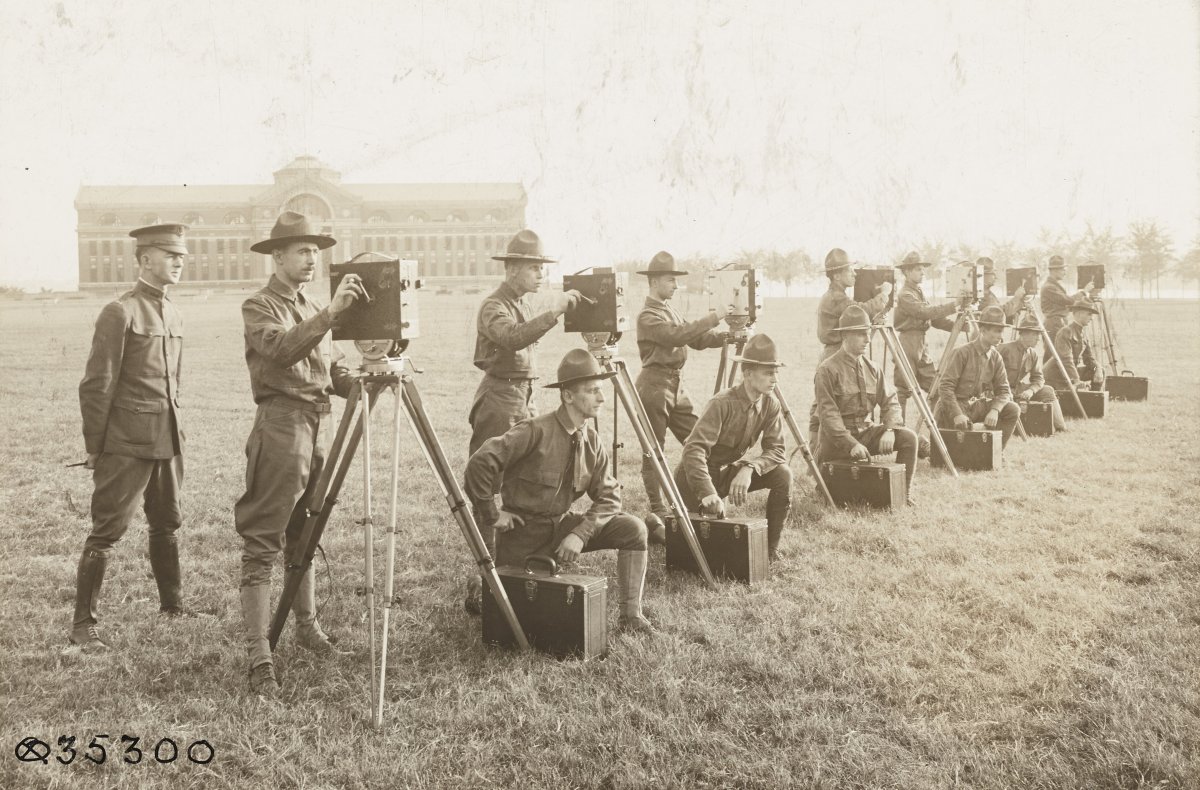 America is in the middle of the 100th anniversary of its involvement in World War I.

The National Archives has put considerable time and effort into making a variety of historical records about “The Great War” available to the public, and one of these projects was digitizing motion pictures that documented the war.

Due to the vast volume of available films, the U.S. Army Signal Corps Historical Collection, Record Group (RG) 111-H, was selected as the main focus of this multiyear effort. The Motion Picture Preservation Lab did a superb job ensuring high-quality transfers. You may read all about it in Criss Kovac’s informative article “Saving the Moving Images of World War I” (Prologue, Fall 2014). 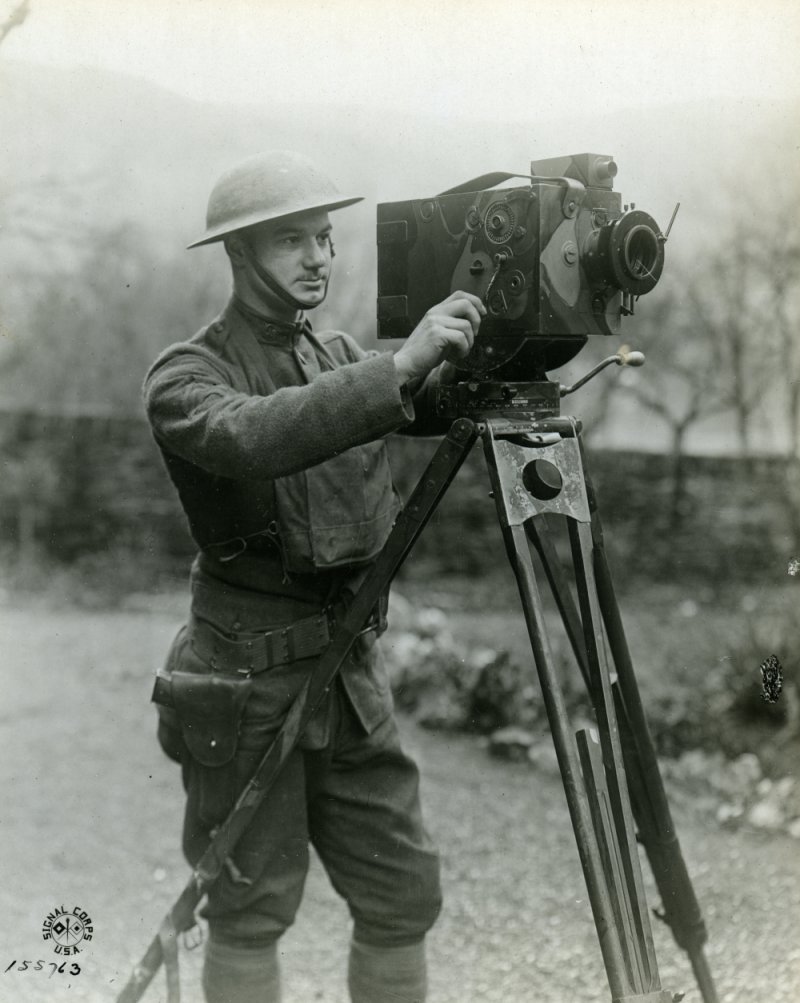 Because of their dedication, you may now view more than 200 titles (and that number is growing) posted at the National Archives YouTube channel (www.youtube.com/USNationalArchives). I also recommend Audrey Amidon’s article “Shooting World War I: The History of the Army Signal Corps Cameramen, 1917–1918,” which was posted in the National Archives’ Unwritten Record blog (unwritten-record.blogs.archives.gov).

As I noted some time ago in my Prologue article “Battlefilm: Motion Pictures of the Great War” (Summer 2008), most—but not all—of the moving images of World War I held in the National Archives are cataloged under the “Historical” (RG 111-H) and “Miscellaneous” (RG 111-M) series (together 488 titles) produced by the Army Signal Corps. Well, I was mistaken. I should have used the term “many” not “most.” In fact, there are an additional 1,000 titles listed in the National Archives Catalog. So, let’s take a few minutes to investigate some other film collections that contain World War I–related footage.

This record group is also home to two films by the Committee on Public Information’s epic propaganda effort, Pershing’s Crusaders and America’s Answer. Of the 516 titles listed in the catalog for RG 111-M, I count 78 that relate to World War I. See catalog.archives.gov/id/35442 to explore these films. Now, moving right along.

The War According to CBS-TV

By far the largest grouping of World War I film titles is located in the CBS collection. It contains footage collected from numerous sources by CBS TV for its landmark 1964–1965 documentary series, World War One. This 26-part half-hour show was narrated by actor Robert Ryan and designed to commemorate the 50th anniversary of the start of the war. If you haven’t had a chance to view this superb series, I suggest you do. It is strongly written and well visualized through the use of both still and moving images.

Soon after completing production, CBS donated all the motion pictures it had collected, but not used for the documentary, to the National Archives. On April 9, 1965, all rights to the film were transferred. The Archives’ staff cataloged the reels into 702 items under “Motion Picture Newsreel Films Used for a Documentary Series on World War I, compiled ca. 1908–ca. 1930.” Today, the films are cataloged under “RG CBS-CBS-WWI.” The 141 miles of valuable 35mm historic footage were wound by CBS onto 747 1,000-foot reels.

Unfortunately for researchers and the public, individual scenes and sequences were not arranged in subjective or chronological order. As a result, unrelated subjects, time periods, and events were combined on the same reel. Also, some of the scene descriptions are a bit cryptic and at times incomplete, as written by CBS some 52 years ago.

One of the interesting aspects of the CBS collection is the considerable number of film depositories from which they secured footage. Assuming my arithmetic is correct, 26 film libraries were sourced from Canada, England, Hungary, Italy, Netherlands, Poland, Sweden, Turkey, and of course, the United States. The scope of this collection is extraordinary. Much of the footage is of unedited scenes showing people, places, and things related to the war’s many battlefronts. Fortunately, more than 85 percent of the collection has now been digitized and is posted, along with both examples noted above, in the National Archives Catalog for your review at catalog.archives.gov/id/89117.

The Ford Motor Company at War 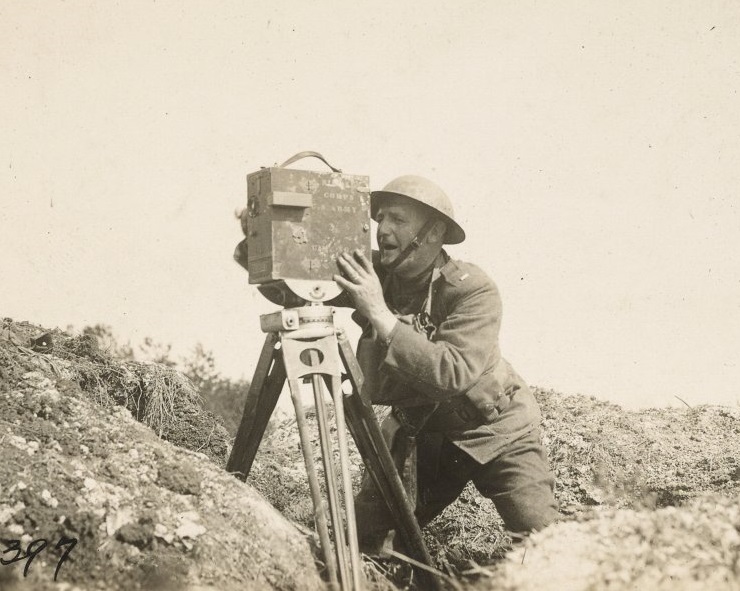 The production tempo of the Ford Motion Picture Laboratories increased considerably soon after America entered World War I in April 1917. In addition to their usual tasks in support of two weekly educational film series and plant operation documentation, camera crews were assigned to film local and regional wartime events. A small sample of these projects included documenting the training of recruits at the U.S. Naval Training Station, Great Lakes, Illinois, which resulted in the 12-part “Making of a Man-O-Warsman” series (1917); 29 titles regarding the building of a fleet of Ford-designed Navy submarine chasers, the Eagle Boat class, at the River Rouge plant (1918–1919); a series of eight films about the making and testing of the Liberty airplane motor (1917–1918); and nine reels that show the testing of the Ford-designed M-1918 three-ton Army tank (1918). Overall, these efforts added 136 World War I–related titles to the Laboratories’ film archive, which is cataloged under RG FC-FC. You may check out the entire Ford film collection in the National Archives Catalog at catalog.archives.gov/id/90439.

On, Above, and Below the Surface

During the war, the U.S. Navy documented some of their own wartime activities. Contained within the 15,093 films listed in the catalog under RG 428-NPC, Moving Images Relating to Military Activities, ca. 1947–1980 at catalog.archives.gov/id/75284, are 15 titles related to the war. Most are duplicates of the Ford-produced “Making of a Man-O-Warsman” series. However, there are a few rarely seen gems listed. “Naval Recruiting Picture, World War 1” (428-NPC-16030) documents the transport of Army troops to France aboard the Navy crewed USS Leviathan. Another title is “U.S. Naval Railway Batteries at Verdun, France” (428-NPC-16026), which shows the operation of these massive and powerful rail-cannons.

At catalog.archives.gov/id/5901 you will find RG 24, “Records of the Bureau of Naval Personnel, 1798–2007” with its 39 titles. Most of these films cover the World War I era with titles like “U.S. Navy mine laying in the North Sea” (24.34); “Naval Aviation Photography,” which shows the taking of photos of Miami from a Navy seaplane (24.4); and “Submarines” (24.9). Of particular interest is a rare 1918 film, “The Virgin Islands of the United States” (24.15), which documents the geography and people of this newly purchased U.S. territory. 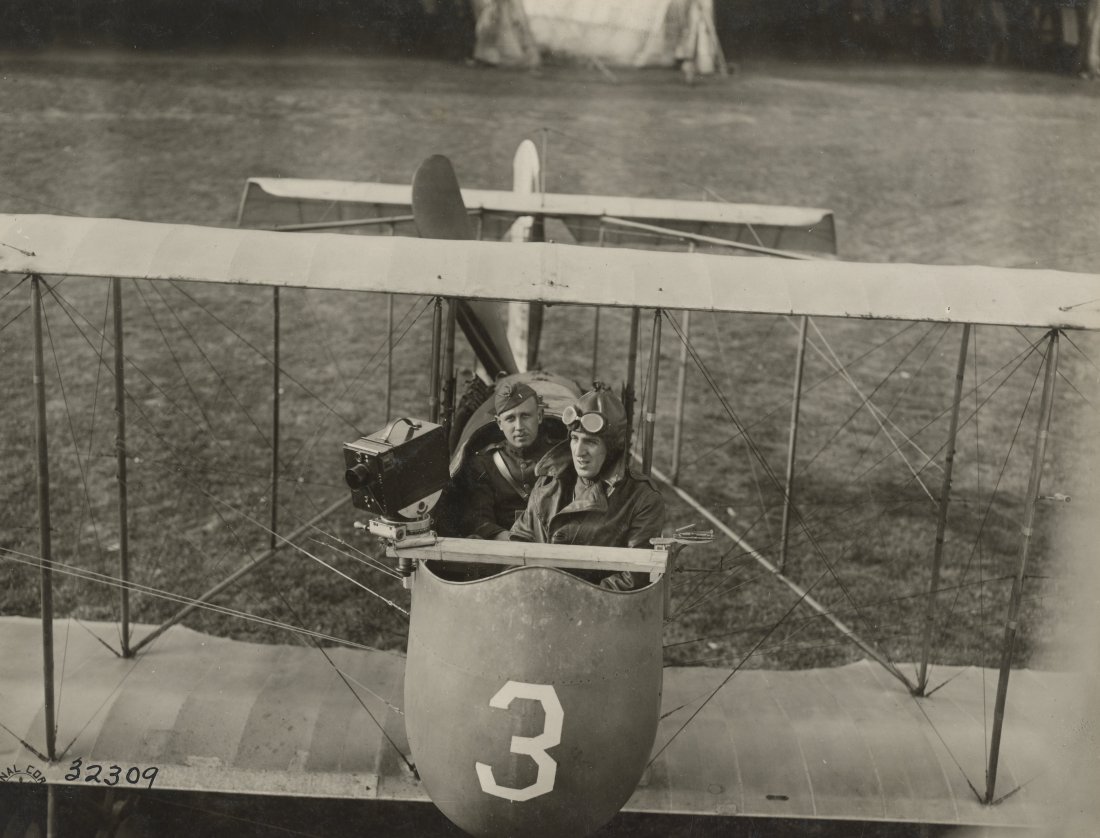 Today’s Air Force didn’t exist during the Great War; it was a small part of the Army. At the beginning of America’s involvement, aviation units were part of the Aviation Section, Signal Corps. After May 1918, they were the Air Service, United States Army. Therefore, almost all flying-related films were managed by the Army, which ultimately became part of the RG 111-H collection when transferred to the National Archives. Once the Air Force was born in 1947, as a parting gift, the Army transferred a large number of duplicate titles, which now make up many of the films in RG 342-USAF, “Moving Images Relating to Military Aviation Activities, 1947–1984.” You may investigate these films at catalog.archives.gov/id/64437. Out of the 8,366 titles listed in the catalog, only 23 have World War I relevancy. Two representative aviation examples contained within this collection are “The Manufacture of Military Airplanes” (342-USAF-20067) and “Activities of the 94th Aero Squadron” (342-USAF-20438).

A collection that contains a few reels of original German footage is “Motion Picture Films from G-2 Army Military Intelligence Division, 1918–ca. 1947,” RG 242-MID, at catalog.archives.gov/id/43649. Of the 849 titles listed, six relate to World War I. “See Krieg, 1914–1918” (242-MID-2987) consists of two subjects: the operational use of the Friedrichshafen FF 33 floatplane and high-seas action of the commerce raider Mowe. Also included in this collection is the British-made film “Baron Von Richthofen’s Funeral Services” (242-MID-3468).

Trolling, as I sometimes do through National Archives Catalog, I came upon the “University of Colorado Medical School Collection, 1918–1919” (RG COLO-COLORADO). This small, 14-title collection includes films such as: “The U.S. Navy Torpedo Boats” (COLO-COLORADO-29); “Our Part in the War,” which focuses on the various artillery, bomb, and torpedo fuses produced by the American Multigraph Co. of Cleveland, OH (COLO-.

Another unexpected find was in RG 4, Records of the U.S. Food Administration, 1917–1920, located at catalog.archives.gov/id/1218. One of the two listed films is titled “Food Conservation” (4.2), and it uses cartoon characters to dramatize the need to conserve food on the home front. You can view this title at www.youtube.com/watch?v=OcMucQj8pMc. 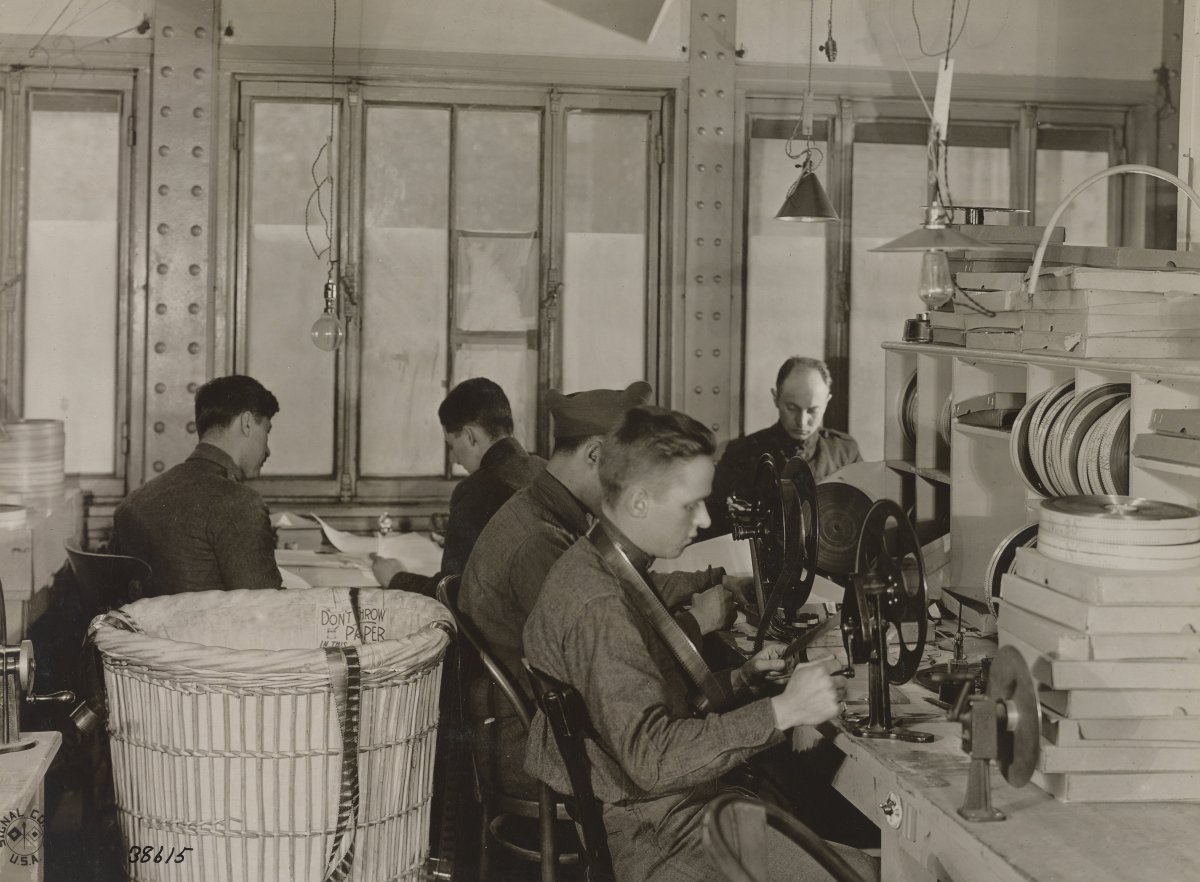 In Vincennes, France, the assembling and editing department prepared motion picture scenes produced by the Signal Corps. Reels of motion pictures are arranged in chronological order, fully edited and captioned, and shipped to the War Plans Division at the Army War College in Washington, D.C. (Sergeant Brooke, 111-SC-38615, RG 111)

As you can probably tell by the photographs that accompany this article, I’m paying tribute to the military and civilian “Movie Men” of all nationalities who lensed World War I action in, above, and behind the trenches. Their determination to master bulky camera gear and get where they needed to be is legendary. Their tenacity to get “the shot,” sometimes at their own peril, set the standard for all military engagements that followed. Through their superb efforts, we have miles of quality moving images that now reside in film collections around the world that help to tell the tale of the “War to End All Wars.”

That brings this brief overview to a conclusion.

Overall, there are approximately 1,500 reels of significant World War I footage preserved in over 30 different collections in the film vaults of the National Archives.

There are scenes from before the war and wartime action before America’s involvement. There’s footage of the initial training of U.S. Army troops, getting them across the “pond,” advanced training in France, and Doughboys in combat. Coverage includes artillery, aviation, engineering, medical services, naval action, and the “Yanks” in Russia. Views of the home front include shots of Victory Loan Drives, patriotic parades and events, men and women building ships, planes, helmets, and gas masks. There’s even a film promoting life insurance.

After the armistice, movie cameras captured views of battle damage, cemeteries, enemy equipment, celebrations, occupation duty, troops returning home, and rehabilitation of the injured. It’s all there for you to explore in glorious black and white.

Phillip W. Stewart is an award-winning author and recipient of the Society of American Archivists Jameson Archival Advocacy Award for his work promoting motion picture film preservation and research at the National Archives. He is the author of 10 film-related books and a Prologue veteran, with four previous articles. One of his recent books is titled BATTLEFILM II: More Motion Pictures of the First World War Held in the U.S. National Archives. His website is www.pwstewart.com.