This article, the sixth of a series on NARA's seven affiliated archives, focuses on the newest one: the records of Brevet Major General John Frederick Hartranft (RG 393) at the Pennsylvania State Archives in Harrisburg. Affiliated archives, first authorized under the Federal Records Act of 1950, are non-NARA institutions that hold—by formal written agreement with NARA—records that are accessioned into the National Archives of the United States. Affiliated archives are established in special instances where the value of the records for the researcher is significantly enhanced by being deposited at a non-NARA facility. The Office of Regional Records Services is responsible for their oversight. Jerry L. Wallace serves as NARA's liaison with the affiliated archives.

In June 1995, the Pennsylvania State Archives was designated an affiliated archives of the National Archives and Records Administration. The State Archives, more formally known as the Division of Archives and Manuscripts, dates from 1903 and now operates as a unit of the Pennsylvania Historical and Museum Commission. Its primary function is to identify, acquire, preserve, and make available for study the permanently valuable public records of the Commonwealth. The State Archives' operation is housed in a twenty-one story records tower, located at the corner of Third and Forster Streets in Harrisburg.

As an affiliated archives, the State Archives maintains custody of the "Records of Brevet Major General John Frederick Hartranft as Special Provost Marshal for the Trial and Execution of the Assassins of President Lincoln." These records are part of the National Archives' Record Group 393, U.S. Army Continental Commands, 1821-1920. The materials consist of an Order Book and Letter Book and fifty-one unbound items including correspondence and orders from Hartranft and other military officers and high government officials relating to the operation of the Military Prison and the care of its inmates. The records cover the period from immediately after the assassination of the President on April 14, 1865, through the trial and eventual hanging of four of the assassins—Paine, Atzerodt, Herold, and Mrs. Surratt—on July 7th of that year.

John Frederick Hartranft was born on December 16, 1830, in Montgomery County, Pennsylvania. He attended Marshall College and later Union College, where he pursued training in civil engineering. He graduated in 1853 and began work as a railroad civil engineer. In 1854, he was appointed deputy sheriff of Montgomery County. Hartranft was admitted to the bar in 1860, and rose to the rank of colonel in the county militia. In April 1861, he raised and led a Montgomery County regiment of ninety-day enlistees to crush the rebellious South. However, their terms of service expired prior to the Battle of Bull Run, and the regiment was disbanded.

Hartranft, nevertheless, remained with the army and served bravely as a staff volunteer during the battle. For his valor on the field, he was awarded the Congressional Medal of Honor. Hartranft then returned to Montgomery County to raise a three-year regiment, the 51st Pennsylvania Volunteers, which he commanded until promoted to brigadier general in May 1864.

During the Civil War, Hartranft served with distinction in several major battles, including the Second Battle of Bull Run, Antietam, Fredericksburg, Vicksburg, Campbell's Station, and Knoxville. Hartranft served as brigadier general for about one year prior to the end of the war, commanding several brigades and divisions. Campaigns in which he participated included the Wilderness and Spotsylvania, as well as operations against Richmond and Petersburg. Hartranft was brevetted major general by General US Grant for having foiled, on March 25, 1865, General Robert E. Lee's last offensive at the battle of Fort Stedman.

Following Lincoln's assassination in April 1865, Hartranft was appointed Special Provost Marshal for Washington, D.C. As Special Provost Marshal, Hartranft was responsible for commanding the Military Prison at the Washington Arsenal, in which the accused conspirators were incarcerated during their trial and at which four were executed on July 7, 1865.

Upon leaving the army, Hartranft began a career in government service, as the Commonwealth's Auditor General from 1865 to 1872 and as Governor of Pennsylvania from 1872 to 1879. During his years as governor, economic depression and unemployment, following the industrial boom of the early 1870s, caused several serious civil disturbances, forcing Hartranft to call out the state militia and ask for assistance from Federal troops to maintain order. Among these were the railroad strikes of 1877 and Molly Maguire incidents in the anthracite coal regions. After peace was restored, Hartranft proposed recognition of labor unions and arbitration of claims. He was a strong advocate of education, municipal reform, regulation of banking, improved industry and commerce, and the reorganization of the National Guard. During his administration, the revision of the Commonwealth's constitution was completed and ratified as the Constitution of 1873. At the Republican Convention in June 1876, he was a contender for the nomination that went to Rutherford B. Hayes.

Hartranft returned to his home in Montgomery County in 1879, where he accepted the position of Postmaster. He was subsequently appointed Port Collector for Philadelphia. He was also reappointed to command the Pennsylvania National Guard, which he had worked to develop. Hartranft died on October 17, 1889.

Those interested in learning more about General Hartranft are referred to A. M. Gambone's Major-General John Frederick Hartranft: Citizen Soldier and Pennsylvania Statesman, published in 1995 by Butternut and Blue of Baltimore, Maryland.

In the 1960s, the records of General Hartranft as Special Provost Marshal relating to the trial and execution of the assassins of President Lincoln were loaned to Gettysburg College under a deposit agreement by Hartranft Stockham, a grandson of the General.

In early 1994, a dispute arose between the Stockham family and Gettysburg College over the legal and physical custody of these records. The discussion was broadened to include the National Archives and Records Administration. After careful review, the NARA determined that the records were federal in nature and rightfully belonged in the holdings of the National Archives of the United States. As a consideration to the Stockham family, an agreement was made to place the Hartranft records on permanent loan at the Pennsylvania State Archives. The transfer of these materials to the Pennsylvania State Archives took place on June 13, 1995.

Following up on its interest in Hartranft, the State Archives initiated discussions in the spring of 1996 with Ronald and Helen Shiremen regarding the existence of other documentary materials. Helen Shireman is the General's great-granddaughter. As a result of this initiative, the State Archives' staff has copied and made part of its holdings 93 photographs pertaining to Hartranft's life. These include photos from his college days and his military career, as well as formal portraits taken as Governor of the Commonwealth.

The Shiremans have also provided papers of Governor Hartranft for microfilming. The records, including 1.5 cubic feet pertaining to his governorship, 1873-1879, consist of correspondence, election records, legislation, commissions, and papers pertaining to the railroad strikes of 1877 and the Molly Maguires in the anthracite coal regions. These valuable records are now available on microfilm in the Archives' Search Room, and provide a wealth of information to researchers on these important years in Pennsylvania history. The National Archives has also provided the State Archives with reference copies of General Hartranft's personal military service records to supplement the other documentation available to researchers.

In addition to the above, there are other papers dealing with the years prior to and succeeding Hartranft's governorship that are being made available. These records consist of Civil War correspondence and reports, family correspondence, commissions, Auditor General records, invitations, and National Guard materials. The State Archives plans to microfilm these additional papers as part of its Manuscript Collections on microfilm.

Because of the trust placed by NARA in the Pennsylvania State Archives to safeguard the Hartranft papers and the generosity of the Shireman family, the people of Pennsylvania have become the recipients of an invaluable collection of materials providing a more complete view of the life and distinguished military and civilian service of John Frederick Hartranft.

Researchers are encouraged to submit their inquiries regarding the John Frederick Hartranft papers to the State Archives. Letters should be addressed to the Pennsylvania State Archives, Box 1026, Harrisburg, PA 17108-1026. The Archives may also be contacted by phone at 717-783-3281, or by fax at 717-787-4822.

Kris T. Althoff is an archivist on the staff of the Pennsylvania State Archives. 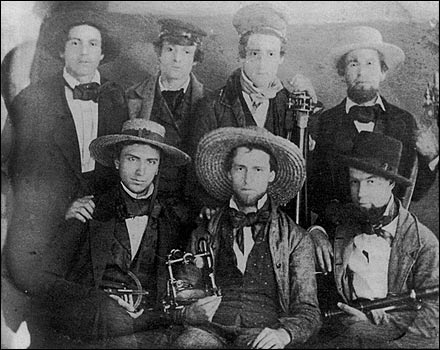