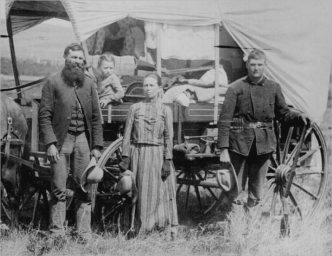 By 1848 the United States had acquired official title to the contiguous land stretching westward to the Pacific, south to the Rio Grande, and north to the 49th parallel. The West had long been explored and settled, however, the opportunity for legitimate land ownership along with other historic events caused a greater number of people to travel. The religious persecution of the Mormons had led them to begin their migration westward by this time. The discovery of gold would soon draw thousands more across the country.

While the records of Federal agencies continue to document changes on the face of western America and the efforts toward effecting some kind of progress, an arbitrary cutoff date of 1912 has been used. At that time Arizona, the last of the contiguous 48 United States, was admitted to the Union.

In addition, the listings are arranged by subject--such as transportation, Native American life, military life, and mining--and thereunder chronologically. An index appears at the end of the list. The index is arranged by State, the names of which usually are the same as their former territorial designations. Some entries appear under more than one State; others could not be indexed by State.

To inquire about images within this list, please see the contact information below for the Still Picture Branch. There are no known copyright restrictions for the photos listed here. Many photographs of the American West are not included in this list. Separate inquiries about them should be as specific as possible, including names, dates, places, and other details.

The research, selection, and arrangement in preparing this select list was done by Charlotte Palmer, who also wrote these introductory remarks in 1974. Additional updates to this introduction were made as recently as May 2021.

Interpreters of the Western Experience

Soldiering in the West

The Disinherited
The Law of the West

Life from the Land

Life by the Sea

Bonanzas from the Earth

The Scramble for Newly Opened Lands

Towns out of Dust and Rock

Celebration of the American Spirit

For further information about the photographs and graphic works held in the Still Picture Branch at College Park, contact:

If you would like to use an image from the Still Picture Branch holdings, please see our Copyright and Permissions page.