What You Can Do Next

Use our National Archives Catalog

See our National Archives Catalog's Search Tips to find out how to retrieve descriptions of textual, photographic, motion picture, and sound materials relating to for Japanese American Internment.

In our online catalog, find over 4,000 online images of items about Japanese American Internment, including:

Read the articles in Prologue magazine

"The Past Recaptured? The Photographic Record of the Internment of Japanese-Americans"
(4.49 MB)

See our materials for Teachers and Students

Documents and Photographs Related to Japanese Relocation During World War II
Includes background on the internment, and a collection of 16 photographs and 3 documents in NARA relating to the WWII relocation of Japanese in the United States. Also includes a lesson plan for educators.

Check the Aliens Topics page in our Genealogy section

The Aliens page includes links to other records related to enemy aliens and other WWII internment programs (such as INS detention centers), and name indexes to Alien Personal History and Statements

Learn about this NHPRC Project

Securing Our Legacy: Understanding Japanese American Resettlement in the Midwest 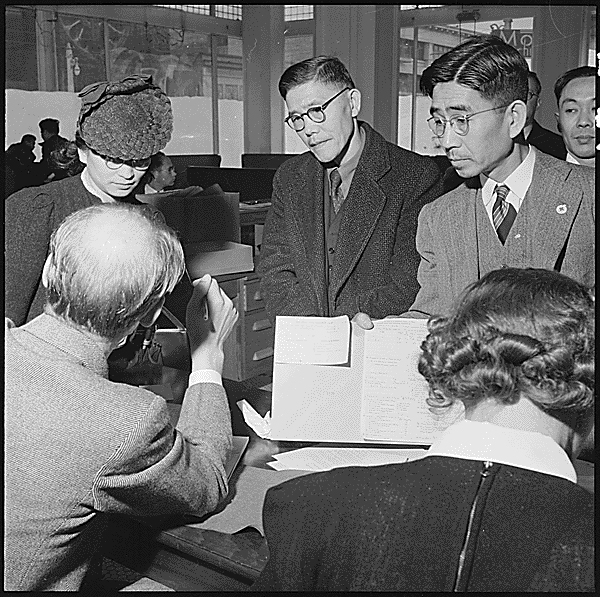 Executive Order 9066: Resulting in the Relocation of Japanese (1942), includes copy of the document and background to the situation. View transcript

Records of the U.S. House of Representatives, Committee on Military Affairs. Mentions protests received by the committee from citizens of California communities against the return of previously interned Japanese-Americans to their homes on the West Coast.

Records of the Senate Judiciary Committee, 1947-68. Mentions records on claims of Japanese-Americans evacuated under Executive Order 9066.

View the Collection from the Truman Presidential Museum & Library

Statistics and Statistical Materials in the Records of the War Relocation Authority, by James Paulauskas (1973), 6 pp.

Check the Guide to Federal Records 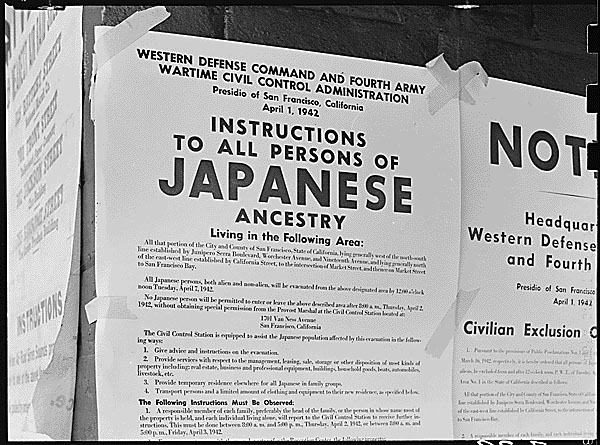 Enlarge
Exclusion Order posted at First and Front Streets directing removal of persons of Japanese ancestry from the first San Francisco section to be effected by the evacuation. National Archives Identifier: 536017

Japanese-American Records in NARA's Pacific Region from the Records for the Study of Ethnic History in the National Archives, Reference Information Paper.

Records for Study of Labor and Business in Pacific Region. See under Labor Supply, RG 83 and RG 96.

Information about Records of the District Courts of the United States (RG 21). See under references to Japanese-Americans in the Records Description under USDC

Records of the Immigration and Naturalization Service (RG 85)

Records from the Office of Foreign Assets Control, RG 265

See related records at the National Archives in Riverside

Records of the Bureau of Indian Affairs , RG 75

Holdings from the Commission on Wartime Relocation and Internment of Civilians

Holdings from the WWII Era

From the War Relocation Authority

Learn about the Sound Recordings available in the National Archives.

Reference to other WRA sound recordings in NARA

Resources on Other Web Sites

Asian GenWeb
Part of the WorldGenWeb, this site links to genealogical information sources in 26 Asian countries.

Department of Homeland Security
Information on how to request information from the USCIS (formerly INS) using the Freedom of Information Act (FOIA) form G-639.

Japan GenWeb
This web site contains links to Japanese genealogical web sites in English, Spanish and Japanese. Research on Japanese family heritage can also be done according to Japanese prefecture.

"Abundant dreams diverted"
Seattle Times article recapping the history of Japanese in Washington State in the early 1900's and their subsequent evacuation to relocation camps in the 1940's.

Report to the President, Japanese-American Internment Sites Preservation (U.S. Department of the Interior, 2001)

The Decision to Evacuate the Japanese from the Pacific Coast
Chapter from "The United States Army in World War II", volume entitled "Guarding the United States and its Outposts." An extensive and detailed army analysis by Stetson Conn of the circumstances surrounding the internment of Japanese-Americans.

Children of the Camps, the Documentary. Historical background provided, copies of documents, and a timeline. Also information about this PBS documentary and how to order.

Conscience and the Constitution

Return to the Valley

"Suffering Under a Great Injustice": Ansel Adams's Photographs of Japanese-American Internment at Manzanar
The Library of Congress presents side-by-side digital scans of both Adams's 242 original negatives and his 209 photographic prints.

Gallery of the Open Frontier, University of Nebraska Press

Japanese-American Archival Collection
From the California State University, Sacramento Library, Department of Special Collections and University Archives. A history of the Japanese experience in the San Joaquin Valley from 1900's to the 1940's. Collection comprises over 5,000 documents, photographs, artifacts and exhibits materials.

Institute of Museum and Library Services, Digital Collections and Content, University of Illinois

Internment of Japanese Americans of the Santa Clara Valley

The Virtual Museum of the City of San Francisco:

The Japanese-American Experience, The Balch Institute

Visit NARA in Washington, DC, or check with the 13 Regional Archives around the country. Many of these facilities have these records on microfilm for use in person. Microfilm can also be purchased.

Some of the available microfilm publications include:

For more information on microfilm, use our Microfilm Search.

If you have any questions or for more information, contact us: