As Eli Whitney left New England and headed South in 1792, he had no idea that he would patent a machine that would profoundly alter the course of American history. While in the South, Whitney quickly learned that Southern plantation owners were eager for a way to make cotton growing profitable. Whitney knew that if he could invent such a machine, he could apply to the federal government for a patent. Read more... 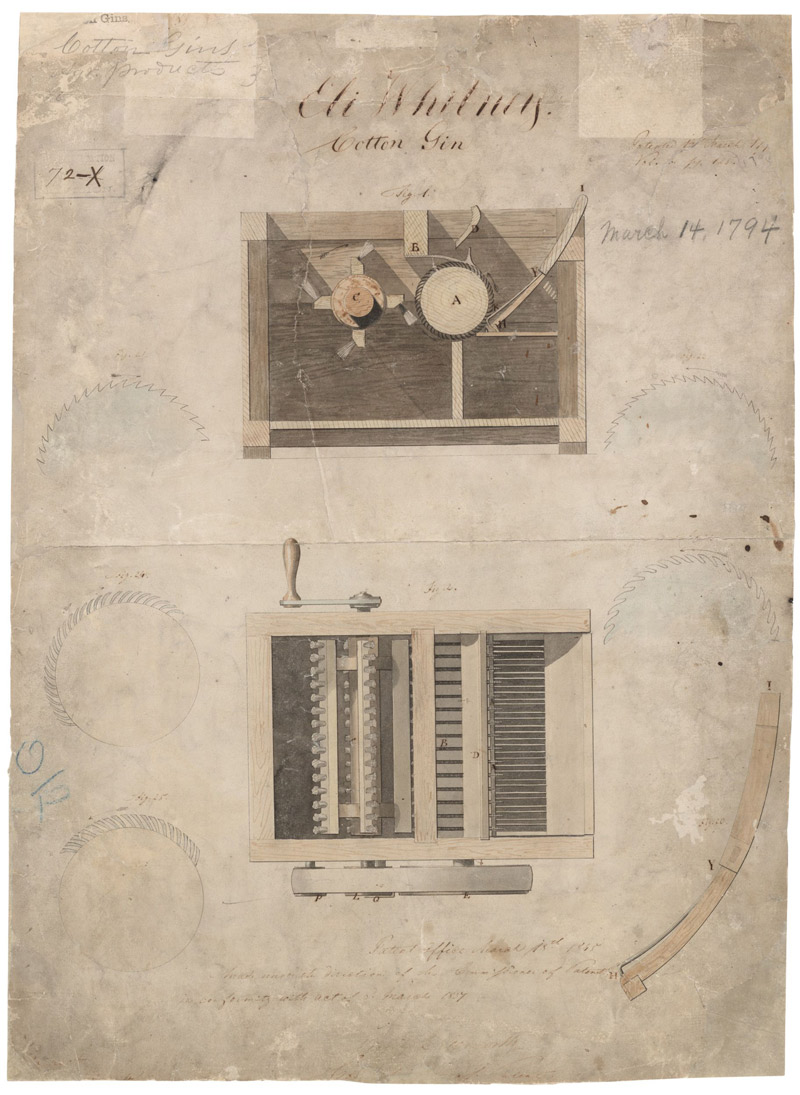 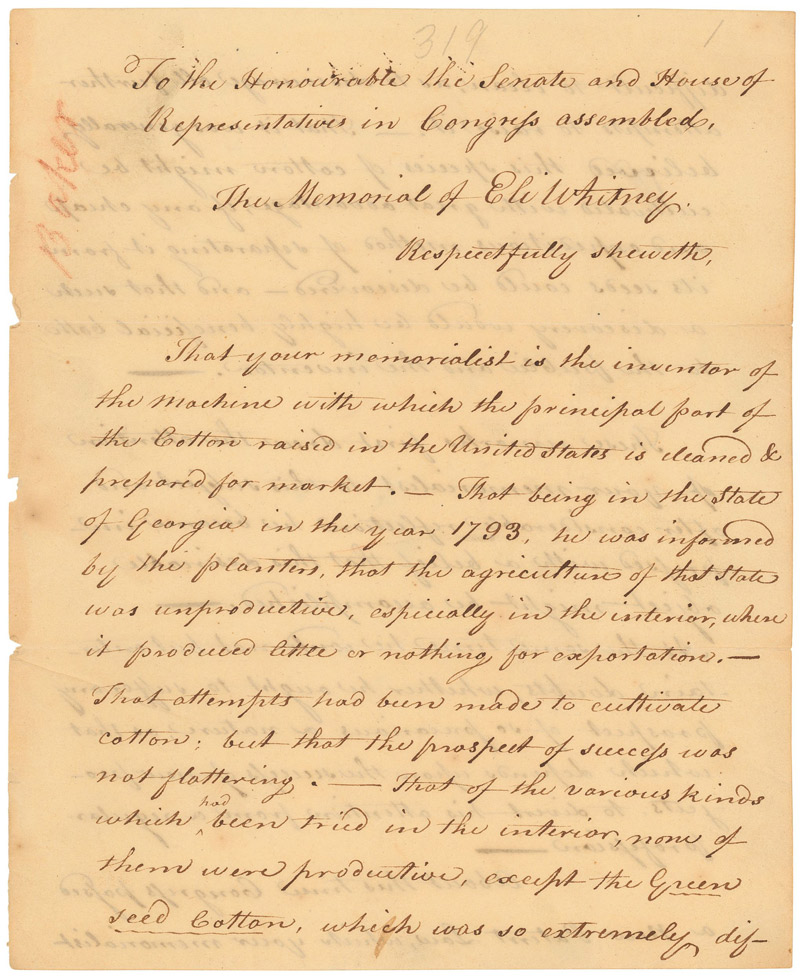 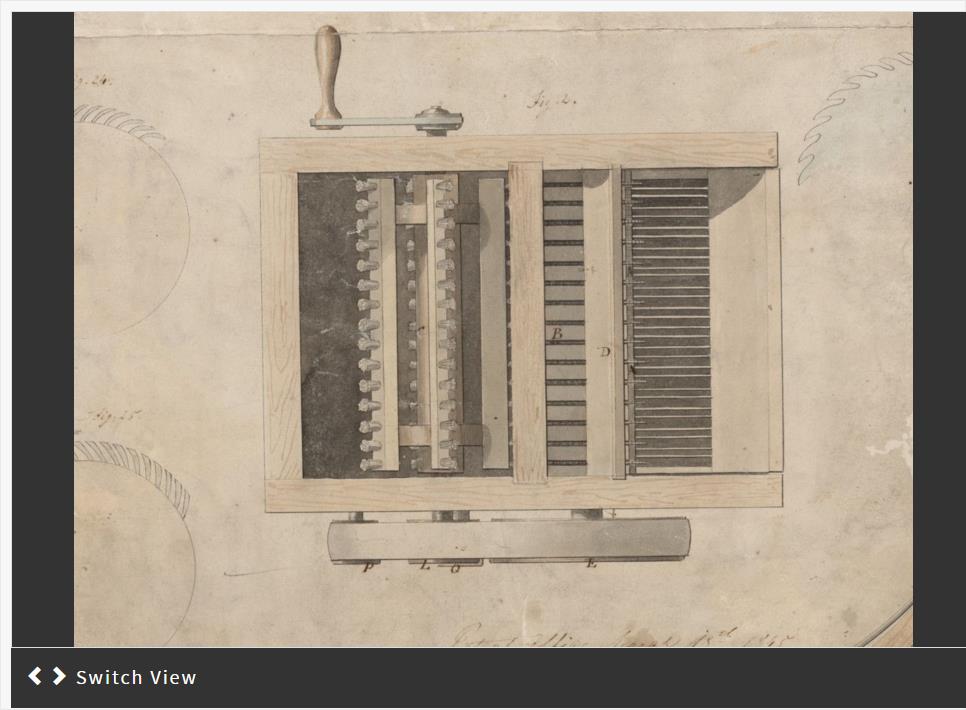 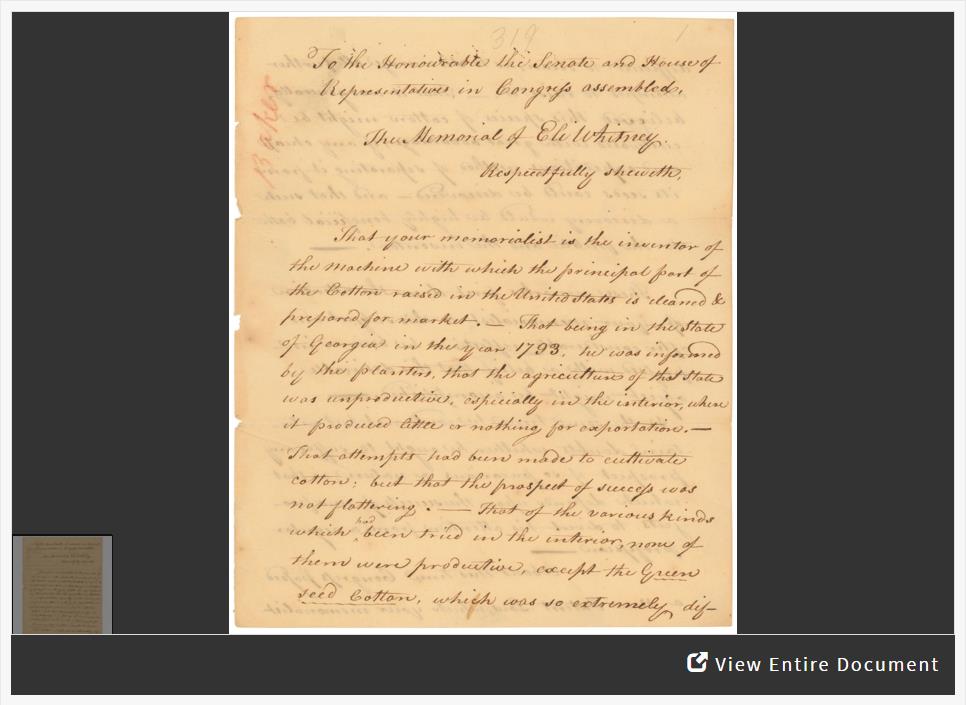 In A Petition for the Cotton Gin on DocsTeach, students will analyze the petition Eli Whitney filed with Congress to renew his patent on his infamous invention - the Cotton Gin. Due to a loophole in the 1793 patent law, competitors were able to make cotton gins without his permission. Though he pursued a solution to this patent infringement in the courts, he was not always successful. Whitney filed this petition with Congress because his patent was set to expire.

Eli Whitney and the Need for an Invention

A recent graduate of Yale, Eli Whitney had given some thought to becoming a lawyer. But, like many college graduates, he had debts to repay first and needed a job. Reluctantly, he left his native Massachusetts to assume the position of private tutor on a plantation in Georgia.

There Whitney quickly learned that Southern plantation owners were looking for a way to make cotton growing profitable at a time when tobacco was declining in profit due to over-supply and soil exhaustion. Long-staple cotton, which was easy to separate from its seeds, could be grown only along the coast. The one variety that grew inland had sticky green seeds that were time consuming to pick out of the fluffy white cotton bolls. Whitney was encouraged to find a solution to this problem by his employer, plantation owner Catherine Greene. Her financial support would be critical to his success.

Whitney knew that if he could invent such a machine, he could apply to the federal government for a patent. If granted, he would have exclusive rights to his invention for 14 years based on the Patent Act of 1790, and he could hope to reap a handsome profit from it.

The Constitution and Patent Law

The Constitution empowers Congress "To promote the progress of science and useful arts by securing for limited times to authors and inventors the exclusive right to their respective writings and discoveries" in Article I, Section 8, Clause 8. Patent law must carefully balance the rights of the inventor to profit from his or her invention (through the grant of a temporary monopoly) against the needs of society at large to benefit from new ideas.

The patent bill of 1790 enabled the government to patent "any useful art, manufacture, engine, machine, or device, or any instrument thereon not before known or used." The patent act of 1793 gave the secretary of state the power to issue a patent to anyone who presented working drawings, a written description, a model, and paid an application fee. Over time the requirements and procedures have changed. Today the U.S. Patent and Trademark Office is under the auspices of the Department of Commerce.

In hopes of making a patentable machine, Whitney put aside his plans to study law and instead tinkered throughout the winter and spring in a secret workshop provided by Catherine Greene. Whitney received a patent for his cotton gin in 1794 (his idea was based on earlier gins and also on ideas from other people, including Greene and enslaved laborers; some say that these were the rightful inventors of the cotton gin). Greene and her husband, Phineas Miller, financed Whitney and the legal battle that would ensue.

A small gin could be hand-cranked; larger versions could be harnessed to a horse or driven by water power. "One man and a horse will do more than fifty men with the old machines," wrote Whitney to his father, "Tis generally said by those who know anything about it, that I shall make a Fortune by it." But patenting an invention and making a profit from it are two different things.

Originally, Whitney opted to produce as many gins as possible, install them throughout Georgia and the South, and charge farmers a fee for doing the ginning for them. Their charge was two-fifths of the profit – paid to them in cotton itself. However, farmers and plantation owners throughout Georgia resented having to go to Whitney's gins where they had to pay what they regarded as an exorbitant tax. They began making their own versions of Whitney's gin and claiming they were "new" inventions. Greene and Miller brought costly suits against the owners of these pirated versions, but because of a loophole in the wording of the 1793 patent act, they were unable to win any suits until 1800, when the law was changed.

Struggling to make a profit and mired in legal battles, Whitney and his partners finally agreed to license gins at a reasonable price. In 1802, South Carolina agreed to purchase Whitney's patent right for $50,000 but delayed in paying it. The partners also arranged to sell the patent rights to North Carolina and Tennessee. By the time the Georgia courts recognized the lack of patent protection that Whitney received, only one year of his patent remained. In 1808, and again in 1812, he petitioned Congress for a renewal of his patent.

Effects of the Cotton Gin

After the invention of the cotton gin, the yield of raw cotton doubled each decade after 1800. Demand was fueled by other inventions of the Industrial Revolution, such as machines to spin and weave it, and the steamboat to transport it. By 1850, America was growing three-quarters of the world's supply of cotton, most of it sent to New England or exported to England where it was manufactured into cloth. During this time tobacco fell in value, rice exports at best stayed steady, and sugar began to thrive, but only in Louisiana. By the mid-19th century, the South provided three-fifths of America's exports – most of it in cotton.

The most significant effect of the cotton gin, however, was the growth of slavery. While it was true that the cotton gin reduced the labor of removing seeds, it did not reduce the need for enslaved labor to grow and pick the cotton. In fact, the opposite occurred. Cotton growing became so profitable for enslavers that it greatly increased their demand for both land and enslaved labor. In 1790, there were six "slave states"; in 1860 there were 15. From 1790 until Congress banned the slave trade from Africa in 1808, Southerners imported 80,000 Africans. By 1860, approximately one in three Southerners was an enslaved person.

Because of the cotton gin, enslaved people labored on ever-larger plantations where work was more regimented and relentless. As large plantations spread into the Southwest, the price of enslaved labor and land inhibited the growth of cities and industries. In the 1850s, seven-eighths of all immigrants settled in the North, where they found 72% of the nation's manufacturing capacity.

While Eli Whitney is best remembered as the inventor of the cotton gin, he was also the father of the mass production method. In 1798, he figured out how to manufacture muskets by machine so that the parts were interchangeable. It was as a manufacturer of muskets that Whitney finally became rich. He died in 1825.

This text was adapted from an article written by Joan Brodsky Schur, a teacher at Village Community School, in New York, NY.