Sixteen-year-old Laura Goodale, daughter of Chester and Asenath Goodale, stitched this family record with its strawberry and vine border around 1809. Her mother submitted the sampler with her widow’s pension application as proof of her marriage to Chester Goodale — a Revolutionary War veteran. For her husband’s service to his country, Asenath was awarded a pension of $50 a year. 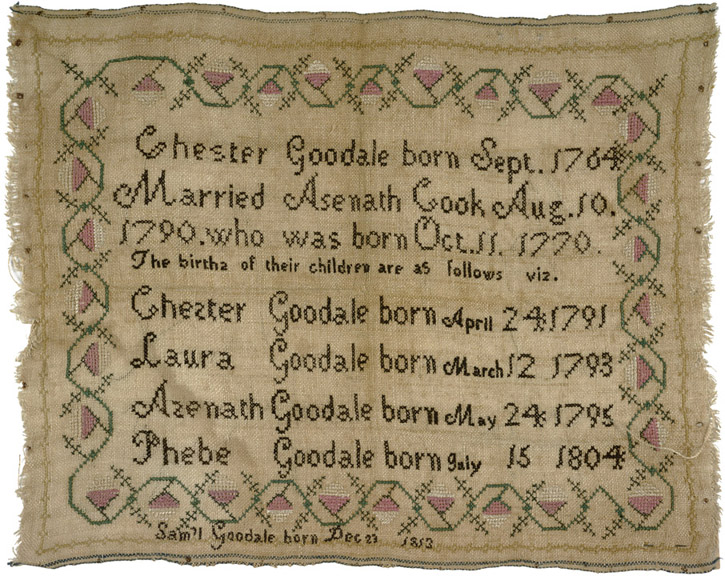 "I must be industrious and make myself fine with my own Hands, and who can blame me for spending some of my time in that manner when it is part of the virtuous Woman’s Character in the Bible."

"From the manner in which a woman draws her thread at every stitch of her needlework, any other woman can surmise her thoughts."

Needlework was an important part of a young woman's education in early America. Girls learned to sew early and often devoted many hours each day to mastering the craft. Many women turned to their sewing needles to express themselves both artistically and intellectually. They also created samplers — decorative pieces of needlework — to record information. Today, samplers serve as important historical documents that can teach us about the past from a woman's perspective.

We can learn more about the fascinating story of Laura and her sampler by analyzing historical documents kept at the National Archives.

On May 25th 1840, Laura [Goodale] Hadley was called before a Justice of the Peace to testify that the sampler she had created thirty years earlier was accurate to the best of her knowledge. This sampler was used to prove that Asenath and Chester Goodale were married—an important step before Asenath could receive her widow’s war pension. You can read Laura’s statement here:

R.F. Barnard, the Justice of the Peace who received the sampler, noted that before it could be taken into evidence it had to be cut from its frame, "a frame which appeared to have been long used with the family."

Asenath Goodale was entitled to a widow's pension because her husband Chester had fought for approximately two years in the Revolutionary War. Chester had originally applied for a soldier’s pension in 1832 at the age of 69. You can access the legal brief for his pension application below. Using the information in this document, can you figure out how old he was when he joined the army?

Because her daughter Laura's sampler was accepted as legal proof of her marriage, Asenath was awarded the sum of $50 per annum. You can view a receipt for one of her pension payments here:

In 1855 Asenath, then 85 years old, applied to receive the 160 acres of land under the Bounty-Land Act of 1855. A copy of Laura's sampler was attached to her application, proving once again that she was indeed married to Chester Goodale.

What information can you gather simply from looking at this piece of needlework? (Note: Laura uses the abbreviation "viz." for the Latin videlicet, meaning "namely")

Collect Needed Knowledge of the Time and Place

Standard 1: Family Life Now and in the Recent Past; Family Life in Various Places Long Ago
Standard 3: The People, Events, Problems, and Ideas that Created the History of Their State
Standard 6: Regional Folklore and Cultural Contributions That Helped to Form Our National Heritage