The landmark ruling in Mendez v. Westminster, in 1946, prohibited segregation in California’s public schools. The Mendez family joined with others in Orange County, California, to sue four school districts. The case underscored that the struggle for civil rights in America crossed regional, racial, and ethnic lines.

In the Fall of 1944, Gonzalo and Felicita Mendez tried to enroll their children in the Main Street School in Orange County, California, which Gonzola had attended as a child. However, the school district had redrawn boundary lines that excluded Mexican neighborhoods. (The school district also segregated Japanese American children. However, it passed a resolution in January 1945 allowing these children to attend the Main Street School.) The Mendez children were assigned to Hoover Elementary School, which was established for Mexican children.

Other Orange County Latino parents faced similar situations with their children. With the help of the United Latin American Citizens (LUCAC), they joined with the Mendez family and sued four local school districts – Westminster, Garden Grove, and El Modeno School Districts and the City of Santa Ana – for segregating their children and 5,000 others. The landmark case came to be known as Mendez v. Westminster School District.

The Petition in the case summarizes the complaint made by the parents. It charges that the schools were violating students' civil rights by segregating students of "Mexican and Latin" ancestry in separate schools. The Petition notes "That all children or persons of Mexican or Latin descent...are now excluded from attending, using, enjoying and receiving the benefits of the education, health and recreation facilities of certain Schools." The complaint further charged "that said children are now and have been segregated and required to and must attend and use certain Schools in said District and Systems, reserved for...children and persons of Mexican and Latin descent..."

During the U.S. District Court trial, Orange County superintendents used stereotypical imagery of Mexicans to explain the basis of school policy. One declared, "Mexicans are inferior in personal hygiene, ability, and in their economic outlook." He further stated that their lack of English prevented them from learning Mother Goose rhymes and that they had hygiene deficiencies, like lice, impetigo, tuberculosis, and generally dirty hands, neck, face and ears. These, he stated, warranted separation.

The attorney for Mendez, David Marcus, called in expert social scientists as witnesses to address the stereotypes. He had fourteen-year-old Carol Torres take the stand to counter claims that Mexican children did not speak English. Felicita Mendez also gave testimony about her family life: "We always tell our children they are Americans." Marcus also challenged the constitutionality of education segregation based on the 14th Amendment.

U.S. District Court Judge Paul J. McCormick concurred with the petitioners, issuing an injunction against the school districts' segregation policies. He stated that there was no justification in the laws of California to segregate Mexican children and that doing so was a "clear denial of the equal protection clause of the 14th Amendment."

The school districts filed an appeal, partly on the basis of a states' rights strategy. The U.S. Ninth Circuit Court upheld the District Court ruling in 1947, and the Orange County school districts dropped the case. The case resulted in the California legislature passing the Anderson bill, a measure that repealed all California school codes mandating segregation. The bill was signed by Governor Earl Warren (who would later become Chief Justice of the Supreme Court and author the opinion in Brown v. Board of Education).

Mendez v. Westminster School District landed an important blow to school segregation in California. It represents one of the growing efforts of Mexican Americans in the 20th Century to cast off systematic prejudice, confronting issues of race, class and citizenship. The Mendez case is also important because it underscored that the struggle for civil rights in America crossed regional, racial, and ethnic lines. Amicus curiae briefs were filed in this case by the National Association for the Advancement of Colored People (NAACP) (coauthored by Thurgood Marshall) and several other civil rights organizations, including the American Jewish Congress, the American Civil Liberties Union (ACLU), the Japanese American League, and the National Lawyers Guild. 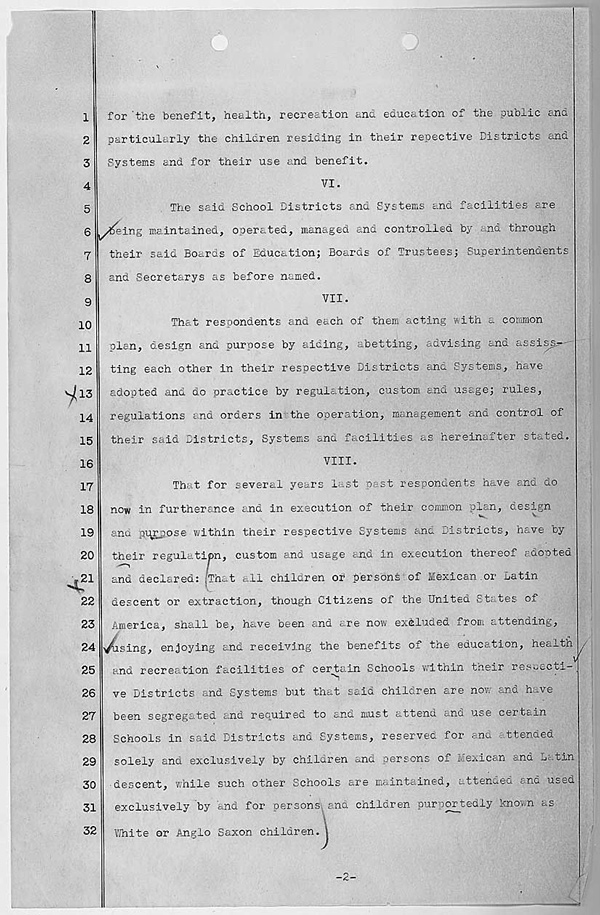 Petition Filed by the Parents of the Students 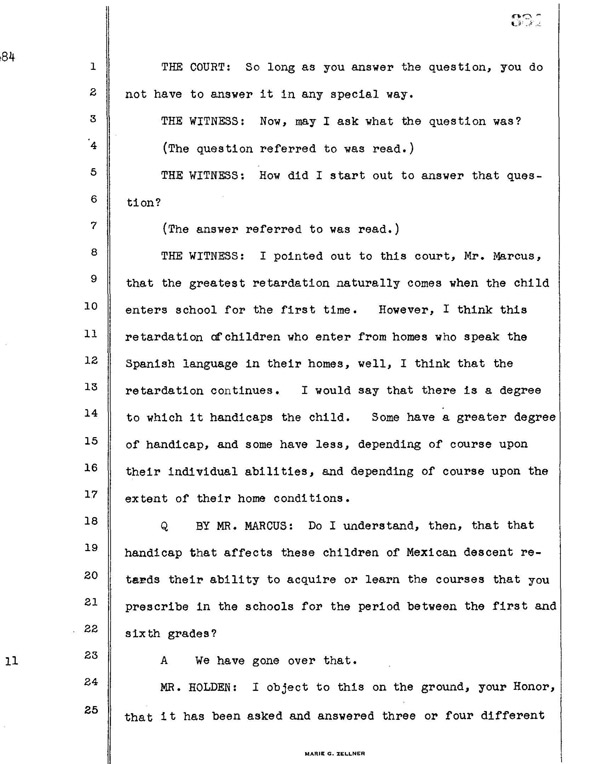 Witness Testimony from Westminster School District Superintendent Richard Harris, in Which He Explained the Reasoning Behind Segregating Children of Mexican Descent 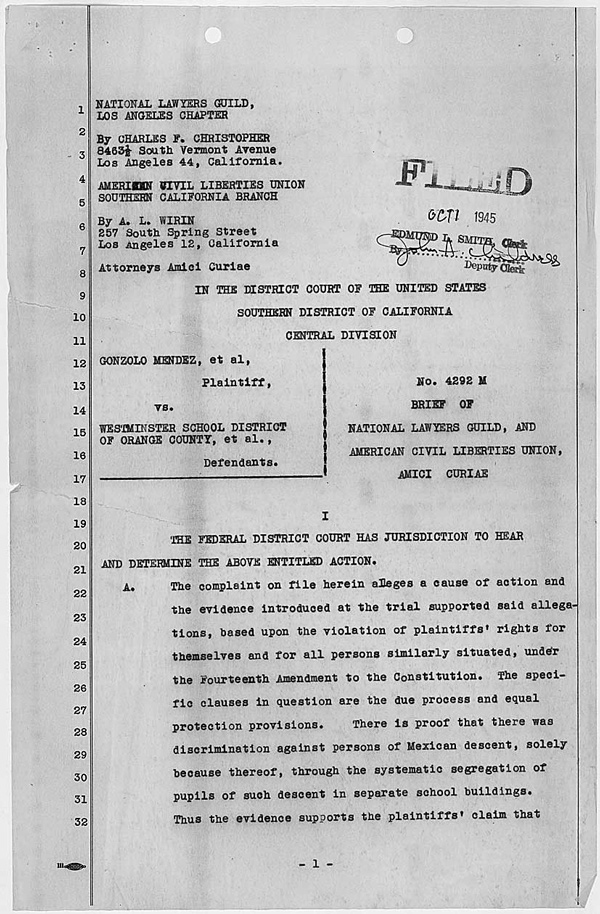 Amici Curiae Brief of the National Lawyers Guild and ACLU 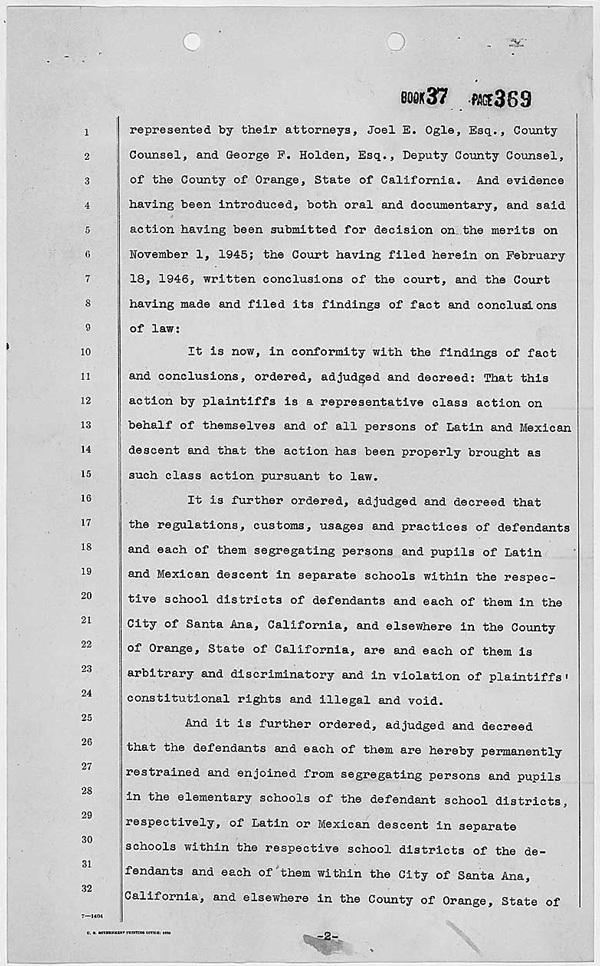 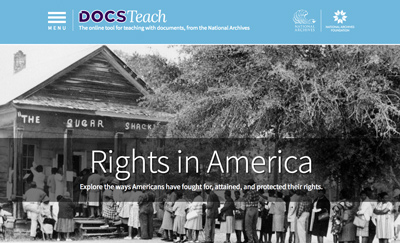 The "Rights in America" page on DocsTeach includes other primary sources and document-based teaching activities related to how individuals and groups have asserted their rights as Americans. It includes topics such as school desegregation, slavery, racism, citizenship, women's independence, immigration, and more.